Long post video heavy, grab a cuppa and a chair.

More from our Sunday road trip. Going into Copala. Indigenous peoples lived in the area around Copala until 1564. At that time Francisco de Ibarra crossed the Sierra Madre Occidental Mountains from Durango and conquered the area for Spain. The next year Spanish prospectors discovered silver veins and the town of Copala was founded. Copala was destroyed in 1616 by an uprising of the Tepehuan Indians but was rebuilt the following year.

Copala is about 2000 feet above sea level. The population is around 400 people. 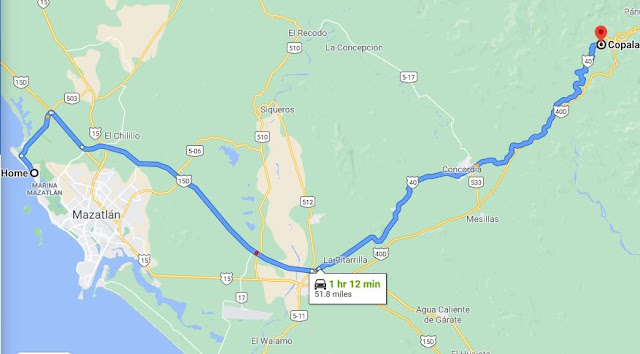 If you keep going on the highway eventually you would reach Durango. This is the old Highway, nicknamed The Devil's Backbone for all its twists and turns. Almost to our turn off. 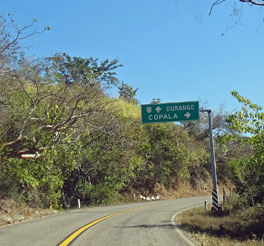 There is a bus stop right across the highway from the road leading into Copala. The waiting area. 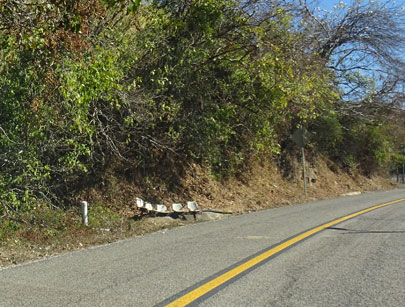 Headed down the cobblestone street. 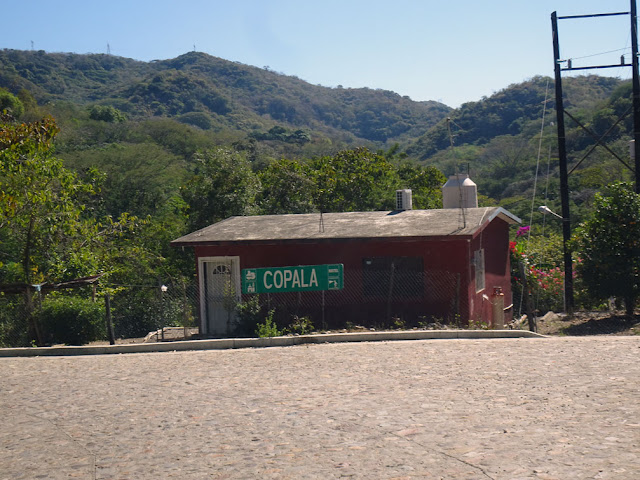 I was wondering about cobblestones so I looked them up.

"True cobblestones, the building material made of small, natural stones with edges smoothed by water, have been around for centuries. In England, the term cobblestone first appeared in the 15th Century when towns wanted to make trade routes and traveling from town to town more reliable and sturdier than the old dirt roads. Actually, though, it was the Romans who first invented cobblestone streets. The first recorded cobblestone roads appeared in Rome’s unparalleled network of roads in the third century. The term cobblestone refers to the smooth, round shape of the stones that workers picked up in rivers and streams. Cobblestones were cheap and they were plentiful. They generally range between 2 and 10 inches in size. They were laid together by hand without any tools in a sort of jigsaw puzzle configuration. Cobblestones were generally laid in sand or sometimes set in mortar if the road owner were wealthy. Cobblestone roads are serviceable. They do not get muddy or rutted by rain like the old dirt roads that needed fixed each spring. Granite cobblestone pavers do not break easily and when they do they are easily replaced with new cobblestones by hand."

This road has been re cobblestoned in the last five or six years. Believe me it is a bumpy ride. Here is a dash cam video of the road from the highway up to the beginning of town. To view it full screen Click Here.

This building used to be a well known restaurant named Daniel's. They were renowned for their banana cream pie. When Daniel passed away the restaurant closed. But the pie still lives on. 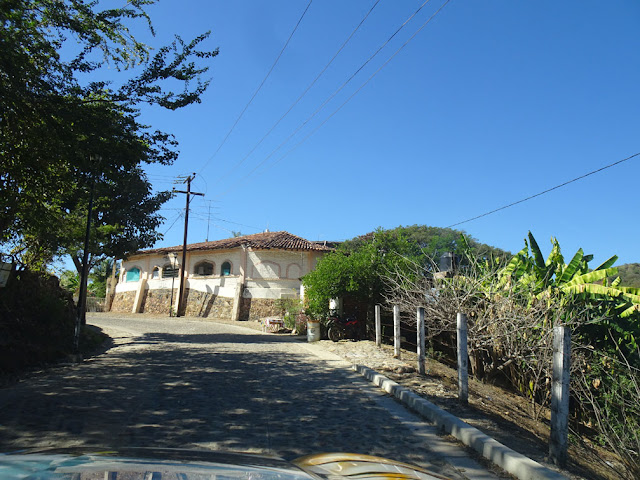 At the entrance to the actual town. 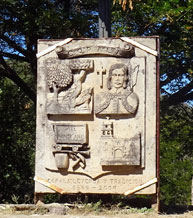 More dash cam video the rest of the way into town. To view full screen - recommended - Click Here
Cobble stone street continues. It is pretty narrow in places. Glad when we met the vehicles we had some place to pull over. Wish I'd seen this butterfly sooner. Oh well next time I'll be watching for it. 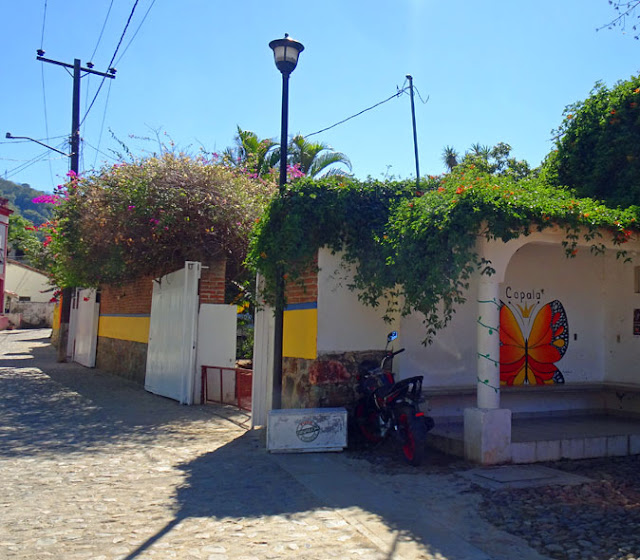 The street really narrows down in places. 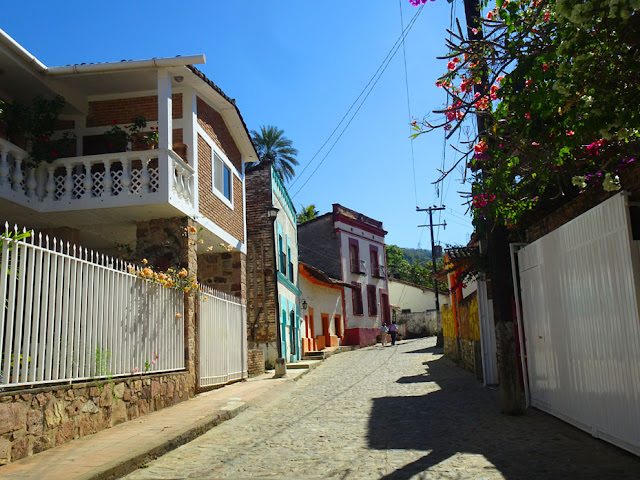 Painted fence, interesting.  I think all the homes along this street have been painted since we were here last year. 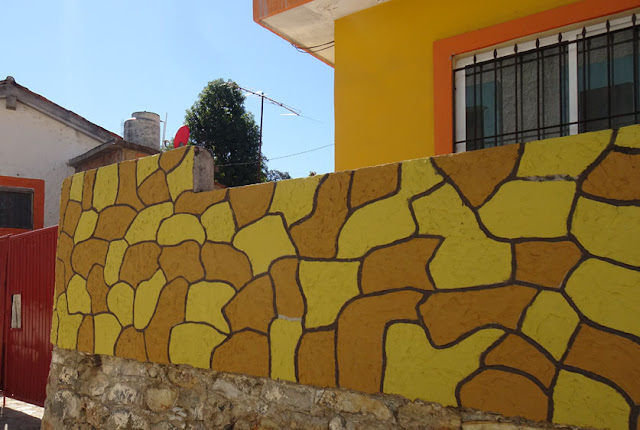 Looking down one of the side streets. 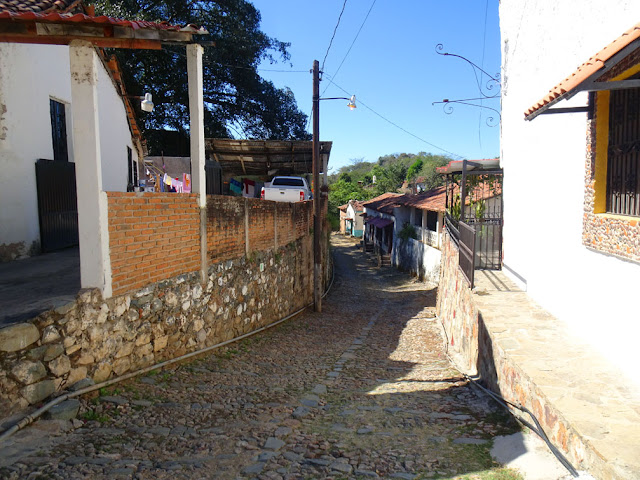 Alejandro's Restaurant - La Casa Del Pay - the house of pie. The ladies who worked for Daniel's now work for Alejandro making banana cream pies. At one time this was a small hotel and later a mining museum. Now a restaurant. Search Copala on this blog and you will find a lot of trips there with a lot of pictures. Last year we are in the restaurant and I took lots of pictures. 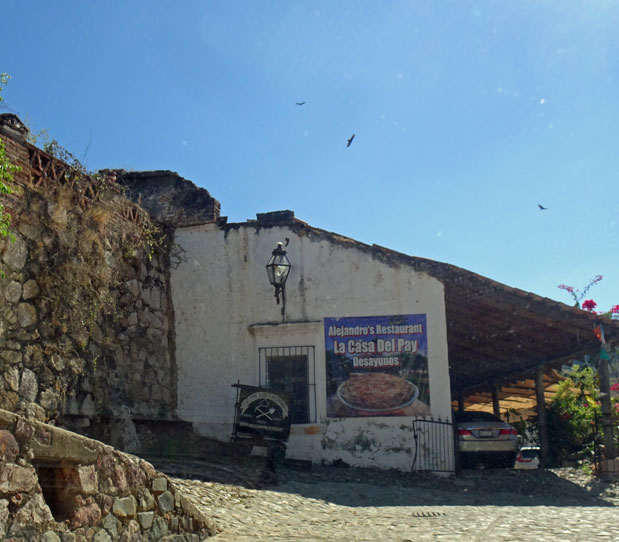 The church in the main plaza. Built in 1748 one of the oldest in Sinaloa. We have been in the church many times - again you can read about it in some of the older blogs. All the doors to the church were closed yesterday. No entrance allowed. 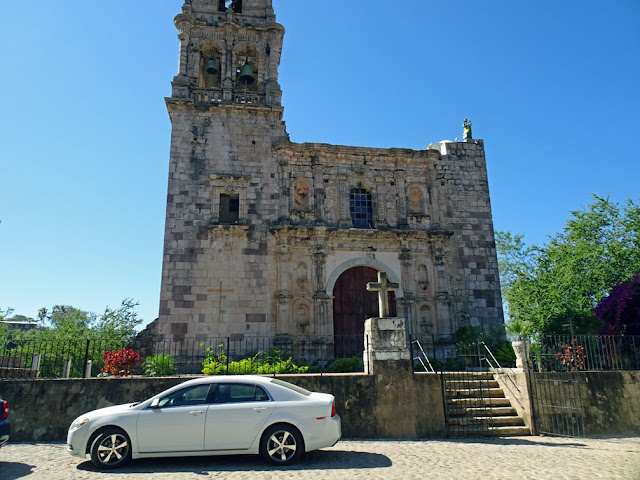 A beautiful big bougainvillea growing in front of the church. New benches and center planters filled with pretty plants. 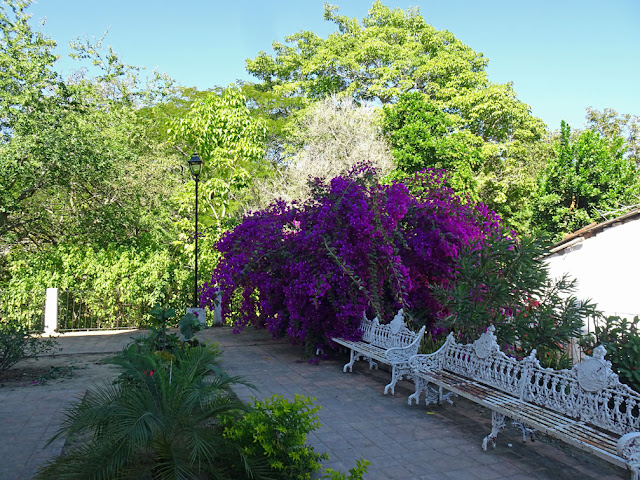 Blog is getting pretty long so going to stop here and finish Copala for tomorrow .  Lots of pictures of the church and three, yes three, drone videos of the town and area around it. Need to work on them now.

An overview of the town from the drone. Especially notice the new off ramp from the Durango/Mazatlan highway. It is a nice thought but it ends in a parking lot that sits up on a steep hill. According to Alejandro the only way into the town is by foot (good luck with that) or by horse back! Enjoy the video. Click here to view full screen. There is some narration with it.