Well I don't have much to write about but trying to do better about posting. Before I go any further does any one use hankies any more, does the younger generation even know what a hankie is? Can you still buy them? That's what happens when you don't have any thing to do - your mind wanders to weird things.

The Las Vegas valley has been having a lot of rain lately. My girlfriend who lives in Henderson has had rain every day. We have had NONE since the two nights of storms. Had some black skies, some wind and thunder but that is it. But, it has remained under 100 for almost a week. Today and tomorrow will be about 102, but then more rain will come and temperatures will be in the 90's. Which sounds good, but humidity is way up Dew Points in the mid to high 60's. UGH. Muggly weather. 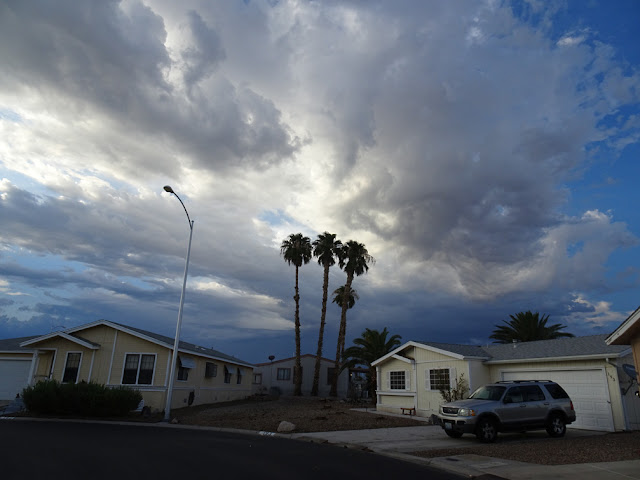 Our ocotillo loves the rain and humidity. It is just full of lush fat green leaves. 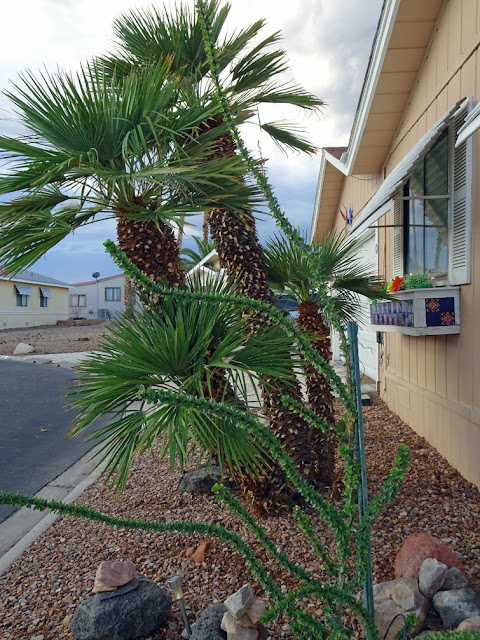 Saturday and Sunday we kept getting alerts on the TV and phone about flash flooding - which was taking place in some parts of the valley - not a drop of rain where we are. Trees came down and power was out and intersections flooded. People here do not know how to react to rain.
Finished another Christmas tree. Might or might not decorate it. Still haven't made it to Hobby Lobby or Michael's to look for stuff. Now I am working on a smaller version. Doesn't use quite as much material. 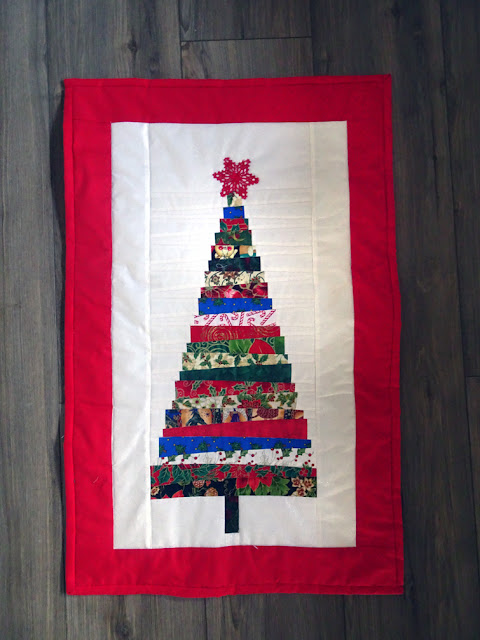 Started this puzzle the other day, only 300 pieces but took a while to finish after doing the doggy. All those leaf pieces looked alike. 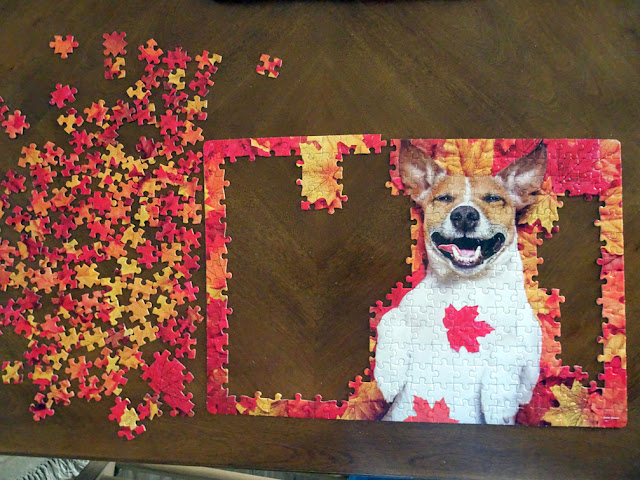 But it is done now. Fun to do. 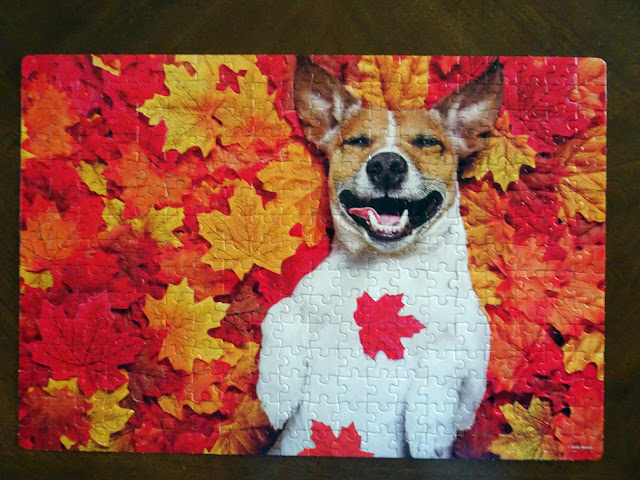 Like I said not much to write about. I haven't seen one of these in years. He has been hanging out on our patio screen for a couple of days now. 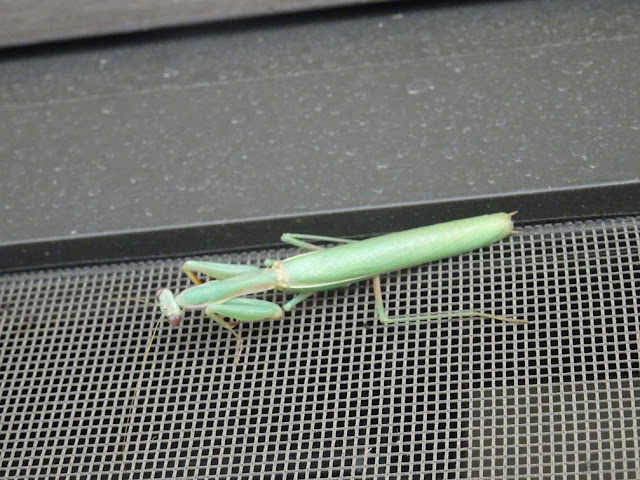 Speaking of the patio, I looked out this morning and one of the hummingbird feeders caught my eye. It was missing the entire bottom. The part where the birds drink the nectar! The bottle was still hanging there but the bottom was gone. Went outside to look for it and can't find it any where. Wonder if the raccoons managed to get to it...
And on that note - another RV was stolen from the storage/parking areas here where we live. A travel trailer, some one just hooked it to their truck and drove out. They also broke into two other RV's in that lot and tampered with the ignitions and stole stuff out of them. Also broke into one RV in the lot where we park ours. So we checked ours out and it was okay, no tampering. Kind of makes us mad.
Been doing so much sewing I've worn out my ironing board cover, guess I need a new one. Bill went on line and ordered me one. I'm kind of surprised they are still sold. 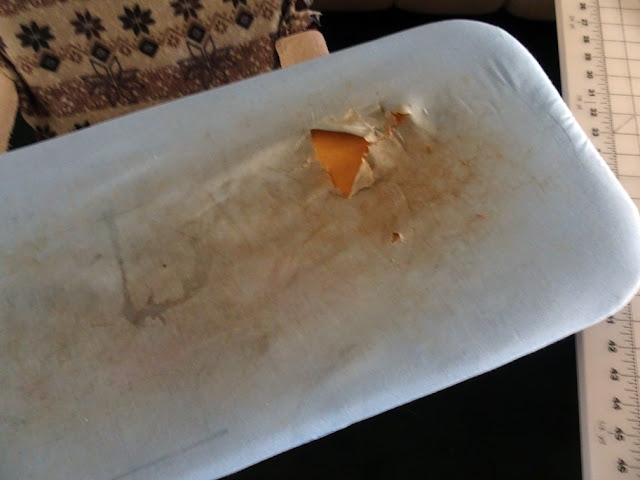 Right now he is making chicken Milanese - lots of it. So I'm staying out of the kitchen - way too hot in there.
That's it for now.
Posted by Carol and Bill at 10:49 AM

Instead of gluing on ornaments, why not put some little balls on pins so that you can move the ornaments around?

As far as hankies go, when I was cleaning out my aunt's house, I found a brand-new box of a dozen men's Irish linen handkerchiefs. The fabric was so fine and beautiful that I could not leave them, so I have them in a drawer. I have no idea what to do with them, but figured they were too nice to go to charity!! I know my aunt and uncle traveled to a lot of places, so I am guessing they got them in Ireland.

And I was at Valley of Fire a few years ago when we had an amazing 2.5" of rain over two days!!

Eric has used cloth hankies for as long as I've known him, 56 years..affectionately called "snot rags😁."

I remember hankies in my early youth and I remember ironing them. The dog in your puzzle looks Canadian what with the red leaf on its chest. Your weather along with the rest of the world is in upheaval. Do they security cameras where the RV's are stored? If not they should, might be easier to catch the thieves.

Judy - good idea about the decorations. I'll have to keep an eye out for tiny ornaments. Remember the hankies with the embroidery on them.
Kathy - I'd forgot calling them that. I think that was the only way we referred to them.
Contessa - I remember ironing them too. Long time ago.