I have an EXCUSE

But first I posted a picture of the fabric rooster I made four years ago, but in the picture it wasn't finished. Here it is finished. Hangs in kitchen above a doorway. Every flower and feather was cut piece by piece from material then adhered to the background. Then top stitched. 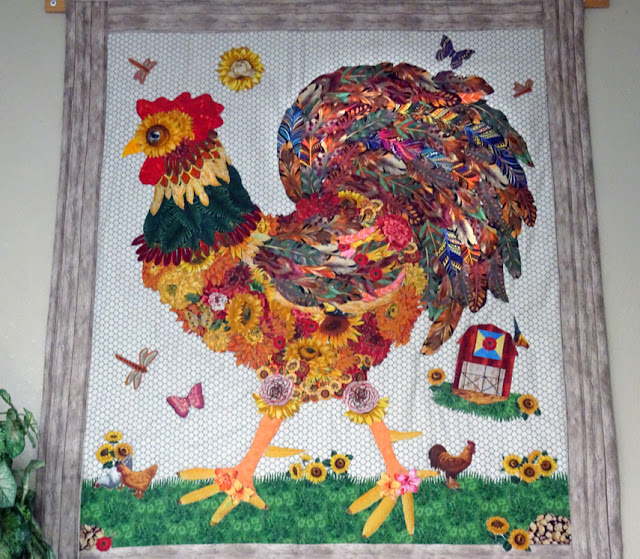 This is fuzzy but you can see some of the individual pieces better. It was very fun to do. The pattern was from the Laura Heine collection. Some of the material came with the pattern but most of it was from fat quarters I had on hand. Mainly the feathers. 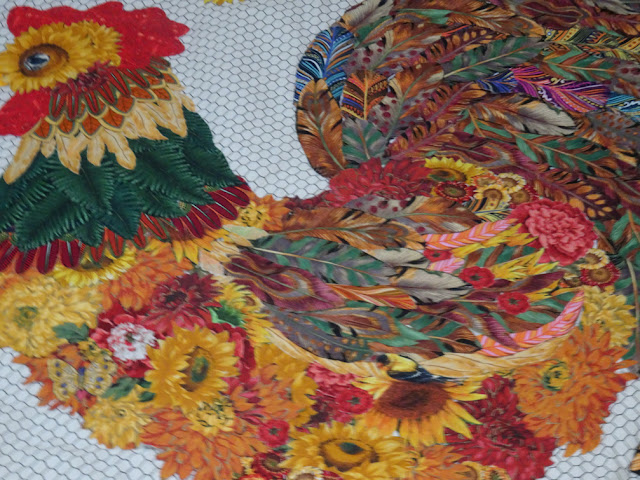 We went from almost a whole month of under 100 degree temperatures to HOT HOT HOT weather. At least the humidity is low again. And no wind for a few days. Yesterday it was so still out it looked like a photograph. Where we live in the lowest eastern part of the valley it is usually about three or four degrees higher than the "official" reading. 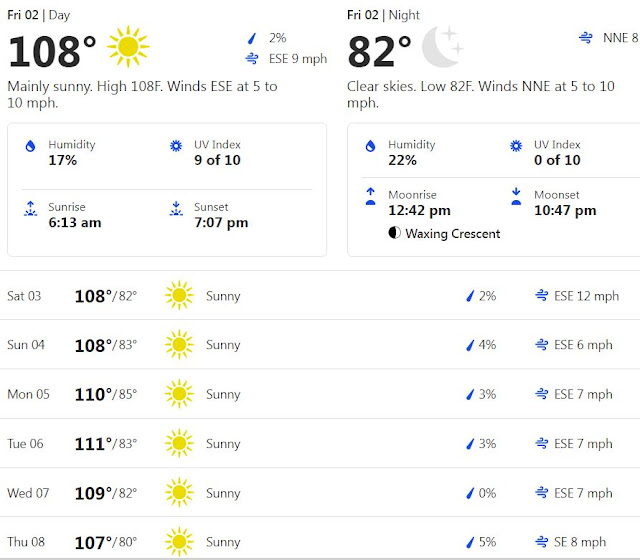 Another puzzle 500 pieces, not one of the ones Bill bought me, it is from a four puzzle set I'd bought a while ago. Was not a fan of the picture. This food is not my cup of tea. But it was a small challenge to do. I did it food group by food group. 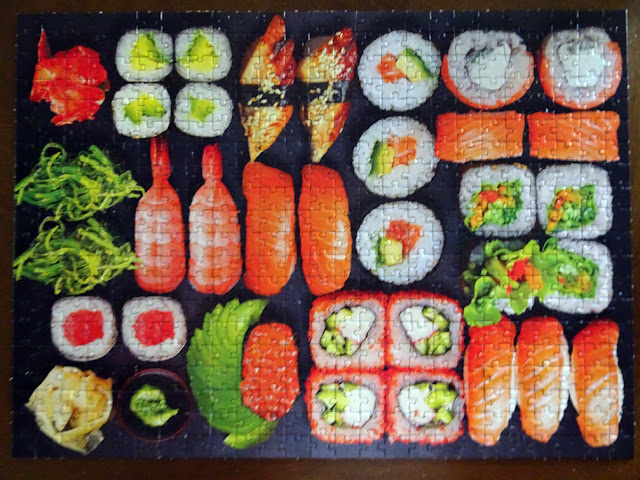 I thought this particular part of the picture was ICKY. 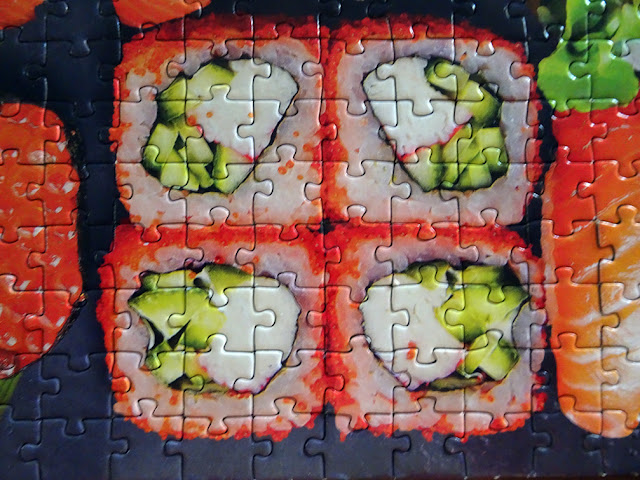 Think I'll do another one Bill bought next.
In the mean time I have finished a total of five large and one half size tree wall hangings. Already gave one away to my walking friend. (She and I managed to get a 2 1/4 mile walk in one morning last week. - The only time we got out early and it was almost cool out.) One of the large ones. Added trim and presents to the original pattern. 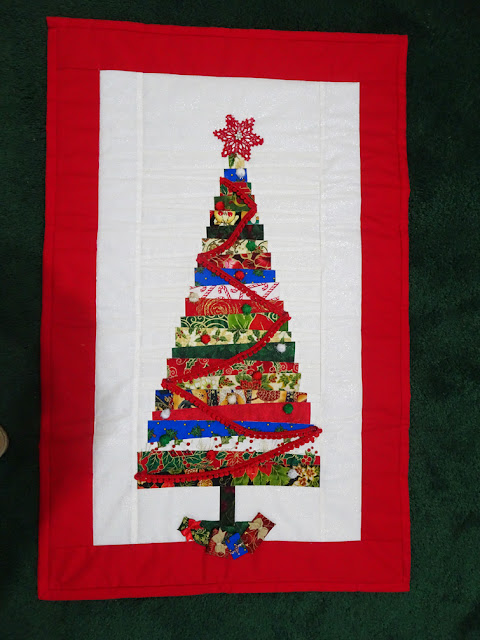 Just a picture of shadows I liked. Took it while waiting to see doc for Bill - He is now on antibiotics again. 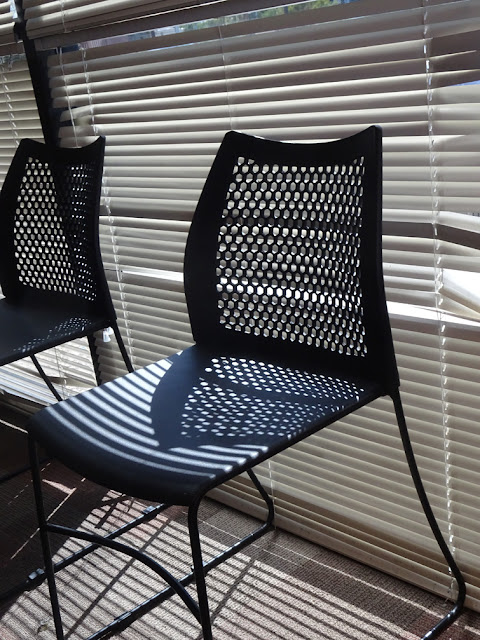 So now for my EXCUSE - well maybe only excuse. We went to the drugstore to pick up his prescription but had to wait about 15 minutes for it. The pharmacist asked us "Want your flu shot while waiting?" For years we never got flu shots, until the time about five years ago we both got THE FLU. Since then we've been getting them. Okay, no problem - get it and forget it. Well didn't quite work out that way. Come afternoon my arm was so sore I couldn't raise it. Well crap. Went to bed about 11 o'clock and when I got in bed I was cold so pulled the blanket up over me. (I haven't been cold since March. Should have been my first clue.) I have not used the blanket for months! Went to sleep - woke up about two o'clock not feeling well at all. Very, very hot - like 102 hot. Bill woke up and was going to get up - not realizing my moving around woke him up. I asked him to stay with me. Shocked the heck out of him. Then he felt me. I wish I'd thought to take a picture of the next couple of hours. To cool me down he covered me in packages of frozen vegetables. Asparagus, peas, stir fry etc. And then frozen wash cloths. It worked. Eventually I cooled down and fell back to sleep. But it took a couple of days to feel like doing any thing but sitting around and sleeping. The muscle in that arm is still a little sore but that too is almost gone. He had no reaction to it. Will I get another flu shot next year, probably...maybe not...So that's my story and I'm sticking with it.
Got out early for groceries this morning, before heat and weekend shoppers. Tomorrow and next day NASCAR racing.
Posted by Carol and Bill at 10:56 AM

Yikes ... that doesn't sound good at all about the shot. Glad you are okay. I absolutely LOVE your rooster. I did a rabbit once and purchased two more, but haven't finished them. Perfect way to get rid of scraps!!

Oh my, so very sorry for the reaction you had from the flu shot and a good thing that only one of you had such a reaction. Sorry, but had to giggle picturing you laying in bed with frozen vegetables all over your body to cool you down. The good thing is it worked and you are feeling better. Bill reacted well to that little emergency that could have become a big emergency. Well done.

You certainly are keeping busy. I wonder if the reaction to the flu shot was because the needle went into the wrong area which caused the reaction. Good for Dr. Bill. I have never had a flu shot. I hope it cools down for you soon.

Nancy - those are fun to work on. It has been over a week and my arm is still sore and I get tired easy. Nasty shot for me.
Sandy - Still residual soreness and tiredness from flu shot. Or I'm just getting old quicker.
Contessa - Trying to keep busy - at least it is cooler here now so it improves my disposition. We will probably leave for Mexico the end of October, but taking out time getting to Mazatlan. Reading the road from Los Mochis isn't much better.