Interesting week or so.

We've had an interesting week. Last Thursday Bill made an unexpected trip to the hospital. He wasn't feeling well - dizzy, breathing labored and weird feeling in chest. No pain in chest so he thought maybe he could walk it off. Well he couldn't, so I finally called 911. He wasn't scary uncomfortable, but better safe than sorry. And the ambulance got lost trying to find our street here in the community. And that's another story. Any way - they were concerned about his heart rate being so low even though we told him it was usually low. To make long story short they loaded him up and took him to the hospital. As I came out the door to get in the car to follow them the paramedics told me the ER would not let me in due to increases of Covid. And that before I went over there to call them to find out for sure. Well s*&%!  So waited a while wondering what was going on. Had phone in my hand when Bill called me. He'd asked doctor and was told I could come. So off I went. First thing they did was make sure he wasn't having a heart issue. Nope all enzymes were good. No heart attack. But because of low heart rate they kept him overnight. He had no serious problems, breathing regulated and dizziness went away. Just upset about not being allowed to go home. I was glad they kept him (but don't tell him that, wanted him there "in case.")  Come morning they were willing to release him. He was his chipper self. One thing we did learn, his cardiologist is one of the best in the city. Every one was impress Bill was seeing him. So that makes us feel good.

Of course he drove home, but first made a stop at Albertson's for a few things. Was surprised when I passed the fresh chicken department. Shelves almost empty. 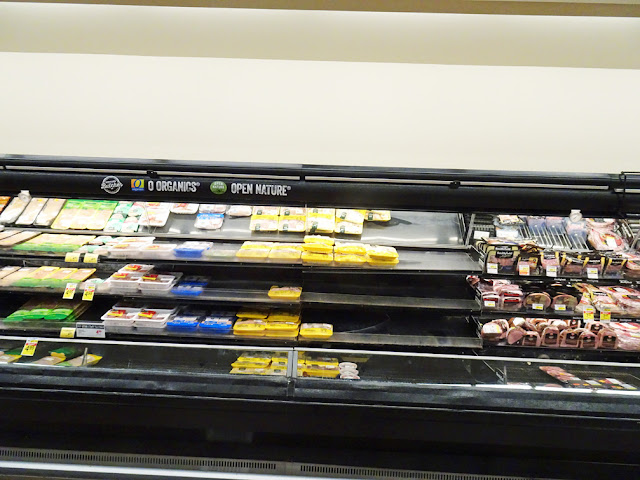 Got home, he continued to be fine, thank goodness. Next Monday he has CAT scan of heart and we should hear something by Friday.
The other morning he was up early and happened to look in the back yard and saw a mother raccoon and two babies. When he went out the door with camera they climbed one of the tall pine trees in our yard. See the mother on the left. Can see paw of one of the little ones in fork of tree on right. 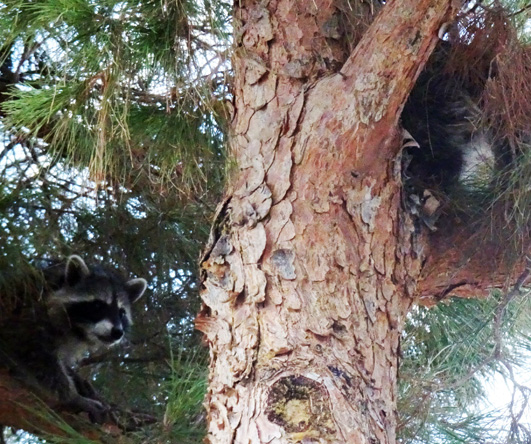 They finally decided he wasn't a threat and came down. Mama first. 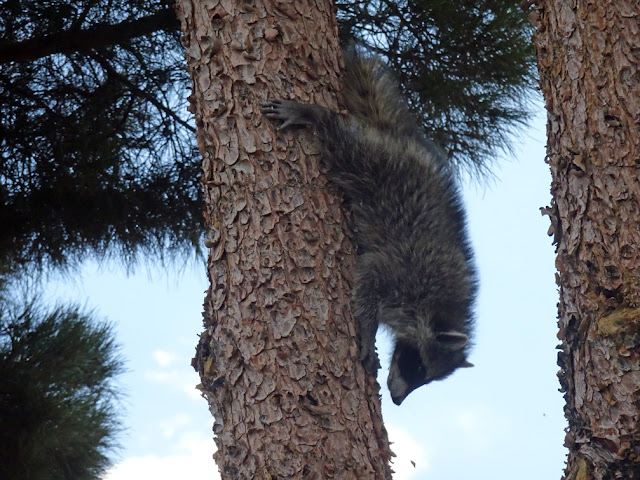 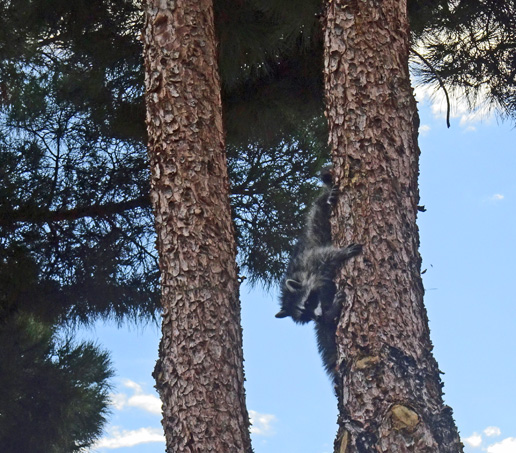 Good thing he didn't get wedged in there. The squirrel and cat on the right are wooden cut outs. 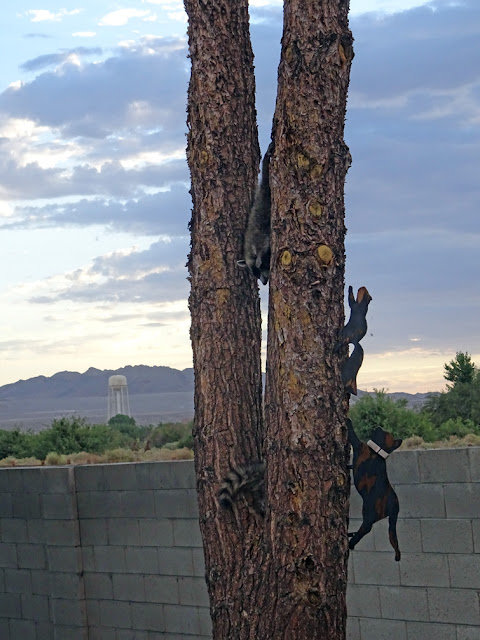 There is a drainage ditch between our yard and the block wall, into it they went and took off to where ever they live, probably the wetlands. 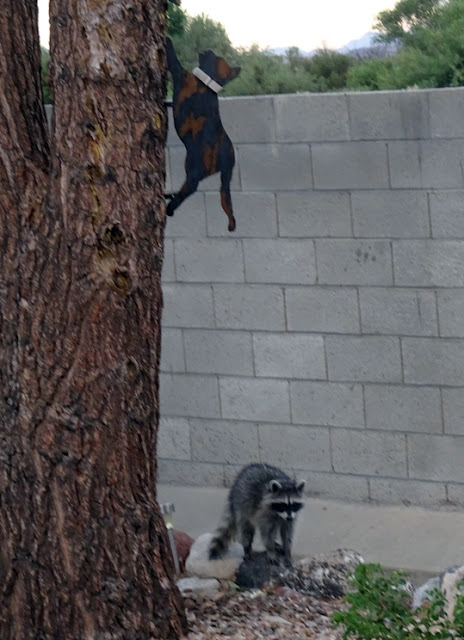 I had so much fun making the first wall hanging I made another one. Trying to use up material scraps. Only had to rip out a couple of seams on this one. Got a better picture. Laid it on kitchen floor and stood on a stool to take it. 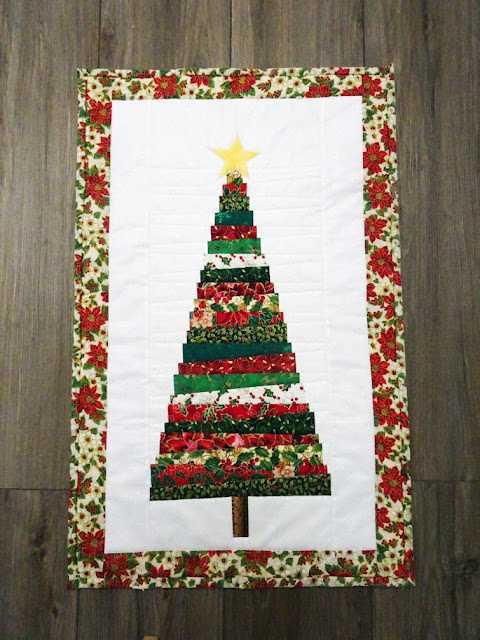 Just a little closer look at the pieces. 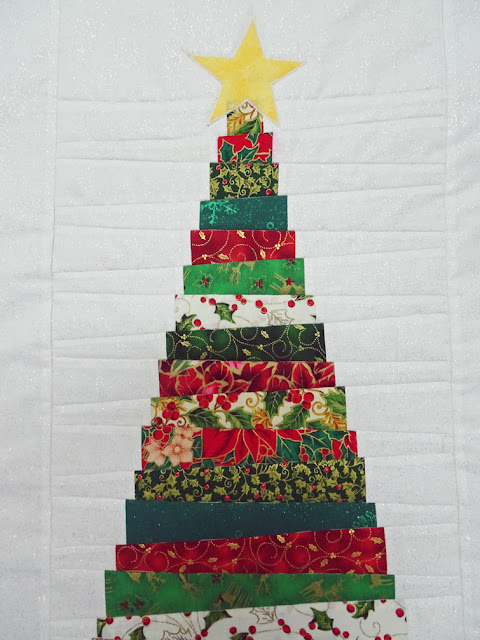 Spent part of yesterday cutting a whole bunch of strips in case I want to make another on. Also started a new puzzle. And watched Bridges of Madison County in the evening. While listening to it rain.
Just saw on the community Facebook page they are thinking about putting up a map of the community by the entry gate. Sounds like a good idea. Hope they do.
Posted by Carol and Bill at 9:35 AM

Glad Bill is doing OK. Need him too be OK so I see you 2 in Mazatlan this winter.

Relieved to hear that Bill was all right. You have that many new case in Las Vegas of Covid?? Whats with the empty shelves??

Glad Bill is OK. A trip to the hospital was in order for sure. A couple of years ago my heart went wonky so off to the ER. My potassium and salt levels were discovered to be low and gave me false heart symptoms. Always better safe than sorry. Raccoons are so smart but so sneaky and destructive. None here in the north.

Doug and Nancy, we aren't out of the woods yet re Bill. He needs heart CAT scan as there is a blockage that hopefully doctor can fix with stent, but won't know for sure for a couple of weeks. If you come to Maz I'll give you one of the hangings, goodness knows I'll have enough of them.
Mark, I sure hope so.
Contessa - no not many cases in Vegas, they are just being extra careful in the emergency rooms. I don't know what was with the empty chicken shelves, haven't seen it like that before, maybe their stock person was not there.
Kathy - Bill is waiting to have a CAT scan of his heart as doctor doesn't like look of something going on. See next blog. But he feels okay now. When we lived in Indiana I thought the raccoons were cute until they tore up our screen porch to get at our herbs.