We are still here

I have been in a bit of a downer for the last several weeks. But am now slowly snapping out of it. The last couple of months were hard. But I am plodding along.

Summer has arrived in Las Vegas. Yesterday was 111 - at 10:30 last night it was still 104!  Bill went out to walk a little this morning at 4:30 and said he didn't go far as it was even too hot for him. Today in the area we live in the very lowest part of the valley on the far east side the high will be 115 or more. The strip will be around 112/113. If it would cool down at night it wouldn't be so bad. The AC runs day and night. The humidity is in the low teens and there has been a breeze. But in a couple of days we might get some tiny chance of rain, so it will get cooler, humidity will rise and the winds will pick up some again. I hope we will be under one of the rain clouds. Just for a change. 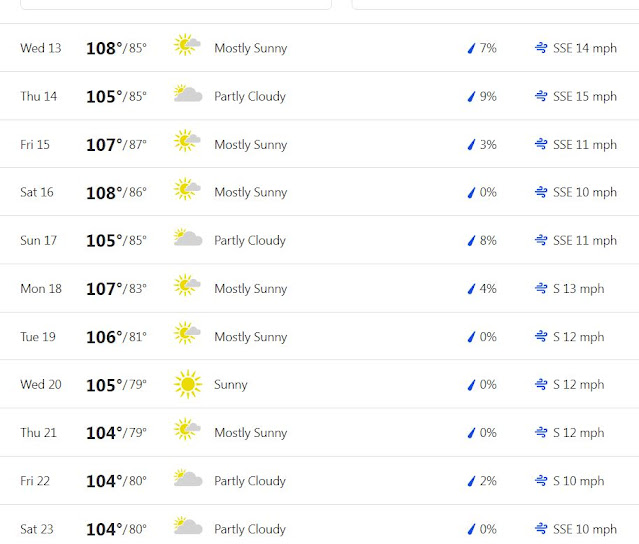 We are still getting visits from the bunnies and the road runner. I like to watch him running. Bill said he saw a coyote walking down the street in front of him this morning. It took off when it saw him. 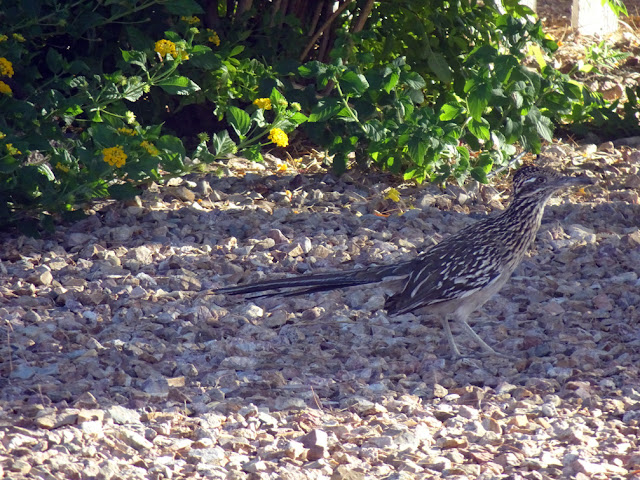 I have started sewing, making Christmas Tree wall hangings [yes hangings, plural or more.] They are challenging and fun to make. And I sure have enough Christmas material.
A tree in progress. All the colored strips have to be cut out, then the white background strips in different lengths have to be cut and sewed to the colored ones. 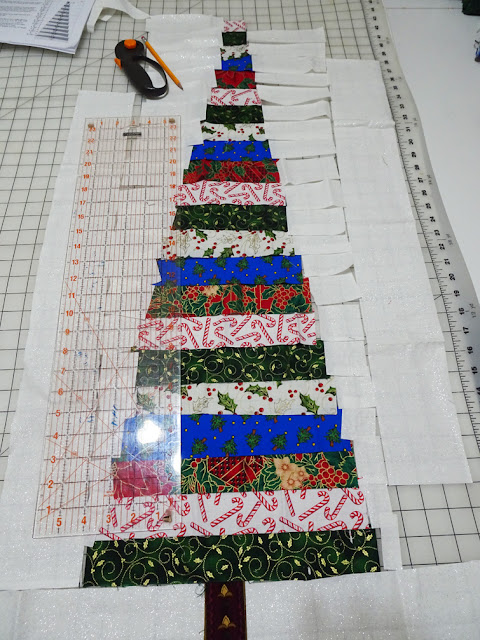 Then they all have to be cut at angles and then sewn together. I managed to sew about five of them together wrong...grrr...won't make that mistake again. This photo is actually the second one I am making. 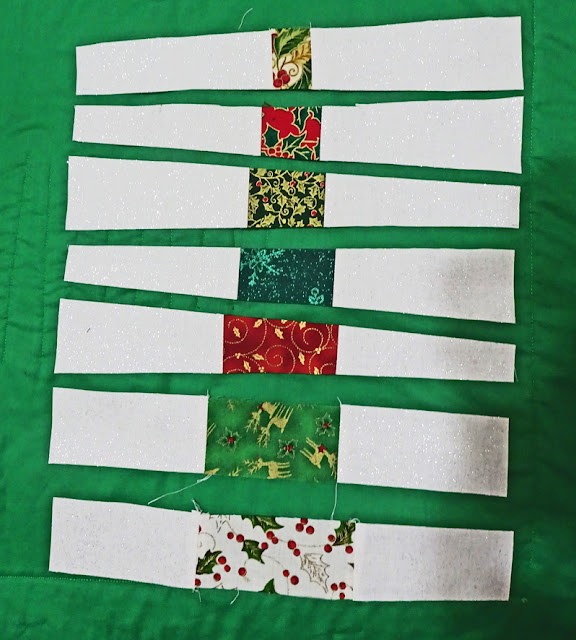 This is the first one done. I can never get a straight picture of something like this. Need to be on a step ladder to take it I guess. 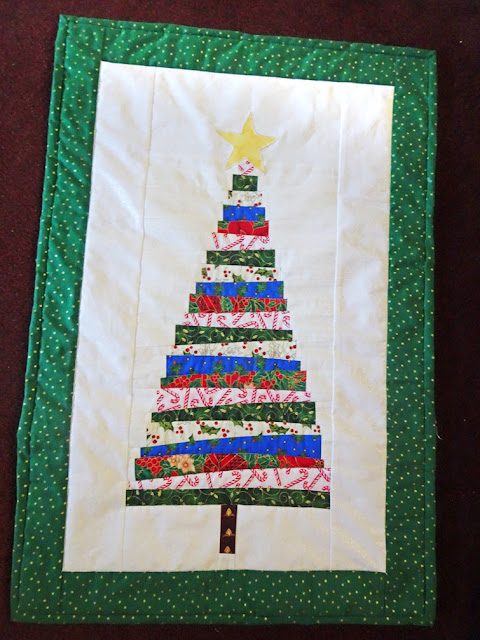 Another finished puzzle. The last one in a multi-puzzle box. The dark blue water took a while to finish. But that is the whole point of them to spend time doing them. 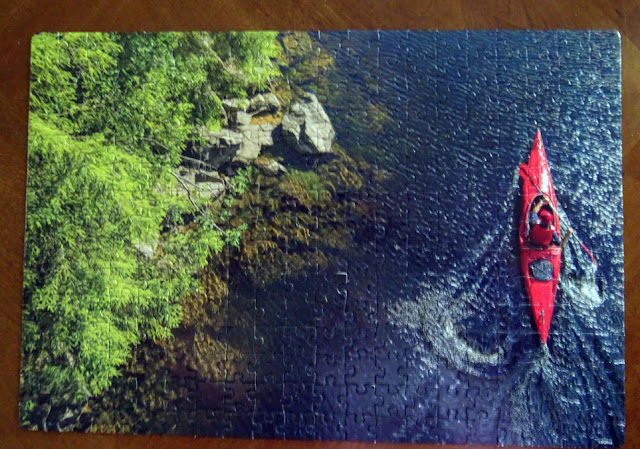 So had to buy a new  box. Wish there were a few more of the bigger ones. Tho I did the small 150 piece one I have marked in red and took me a couple of days just for the part on the top that is boxed in red. The pieces were all the same color and most of them fitted into several other pieces, until I went to add a new piece and it wouldn't fit. It ended up I had one piece left and one hole for a piece but the one I had didn't fit there. I looked and looked for where I had a wrong piece in - no where. Studies the hole and the piece for a while. Then turned the piece over with picture side down and it fit the hole perfectly...go figure. Did I mention this boxed set was very cheap - only 11 dollars, guess you get what you pay for. 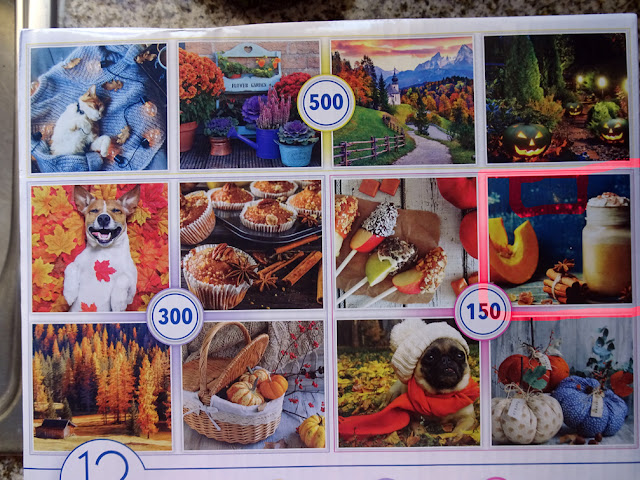 Now I'm working on the 300 piece one of the muffins. I really miss being able to get out in the mornings and walk. Don't want to go to a mall, too many people there and have to use too much gas - which is still around $5.50 here.
Been watching The Crown on Netflex. Pretty interesting. Being a princess isn't as much fun as it sounds.
Other things going on here but will leave them for another time.
Posted by Carol and Bill at 12:56 PM

Nice to hear from you! Wow, to that's hot, even for us! We are finally getting some summer in the Pacific Northwest. Should see temps around mid to high seventies. It will likely only last for the week and then we'll be back, looking to where the summer went. We do gets lots of rain but then that's why they call it the "rainforest" I suppose!! Stay well. Hugs!

By the way, Doug says our gas is currently about $5.75-6.00 US per gallon so we are pretty close to your pricing. Just drove to Alberta and back with our small trailer and it cost us $1600 in gas. Ridiculous.....

Thanks for the update. You certainly manage to keep busy. Those Christmas tress are going to take quite some time. Hope the muffin puzzle does not make you too hungry. Though not being able to get out on a walk because of the heat. We are in the midst of a heat wave here and pretty much living in the A/C. 91F right now at 3PM.

You have been missed. Glad you are feeling better but you still stay so busy. The Christmas Tree Wall hanging is beautiful and I am sure the next ones will be, also. So good to see a post from you.

Glad you are back and feeling better!! We feel your pain on the heat, here in central Texas the weather forecast calls for temperatures above 100 for as far as it goes out. Gas prices here have come down a bit $3.88. Hard to believe we get excited about that.

I'm with you on the heat outside, and it's not been past 106 here. LOVE your Christmas tree wall hanging. There's nothing like having to rip out ten pieces, just ask me!! I'm much more careful now! I've not done many puzzles before, but I'm buying a couple. It's more fun than pacing around the house!!

Doug and Nancy, I would love your temperatures, even with the rain we will be around 108 all week. The price of gas, and Bills appointments, are the reasons we haven't gone any where this summer. Also it is smoky every where again from fires. Ugh.
Contessa, thanks for your concern. Did have a reason not to write for a few days. Now on to even more puzzles, they take my mind off of other things for a while. It is even too hot at 4:30 in the morning to get out to walk here. And last few days lots of humidity.
Ruth, would love the price of your gas. Still cheapest in valley 4.89. Hope when we go to fill the RV it is lower.

Sandy - some days just don't feel like doing any thing, need to improve my mood soon. Fun doing the wall hangings. Finished another one and probably starting one more today. Just need to figure out what to do with them when they pile up.
Nancy K - I really don't mind the ripping, just irritates me I made such a stupid mistake. Starting my third one today. Still too hot and now humid to go out much.