We have been keeping busy the last few days. Running  all over town trying to get one thing done. Finally accomplished it today. More on that later.
One place we've visited a lot the last couple of weeks is our local CVS Pharmacy. First turning in all our new prescriptions and getting them filled last week. And then this week getting them all refilled again using our "vacation override" so we have enough to last us until we get home around the end of March. Almost got it all done without a hitch - almost...But all is taken care of now. Also had a doctors appointment where I had to leave a sample - and they LOST it - so back across town [about 19 miles across town!] to redo. Almost didn't go back but it is a good thing I did as I'm now on antibiotics for not one but two types of infection.
As we were running in and out of CVS we noticed the Star Shower Motion Laser Lites on sale. So of course had to get one for the RV while in Mexico.
This is it in our computer room - just checking it out - wasn't very dark in there but we got the idea. It is now waiting for a place to go in the RV. 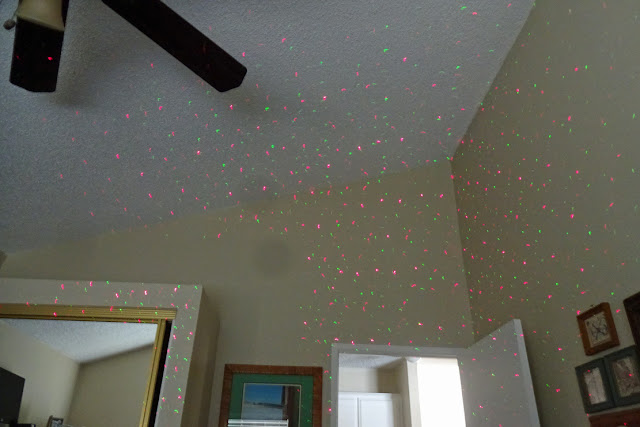 I'm glad I'd ordered our meals in a box for the week, came in handy. This was our last one. Baked and flavored sweet potato wedges, salad with mango and red pepper and chicken with spices. Very good. Bill wasn't too impress with this one. Not into mango or raw peppers. So yesterday I remembered to go on line and cancel our account. No more meals. 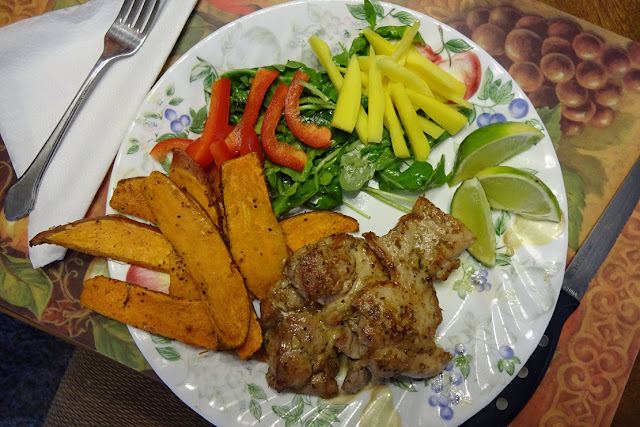 And my sewing machine finally came back and it is repaired. So over to pick it up. The lady in the repair department was working on this Thanksgiving table runner. Thought it was cute, because there was so much delay in getting my machine back she gave me the pattern. Something to do next year. 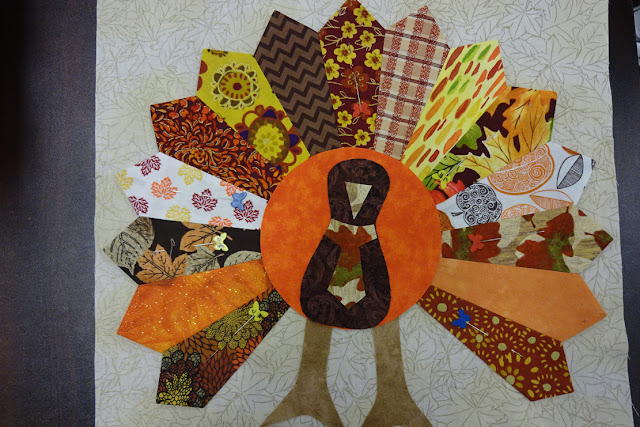 A turkey at each end. Good way to use up scraps! 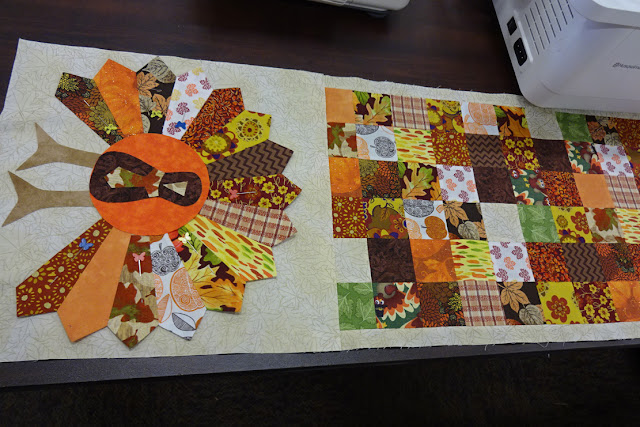 Las Vegas has a brand new ice hockey team - The Golden Knights - so far they've won 4 out of 5 games! The team also has put out a shirt for the 1 October victims. 100% of proceeds will go to families.  From the first time I saw the shirt I wanted one. So while across town we went to their new practice facility in Summerland.  The outside of it. 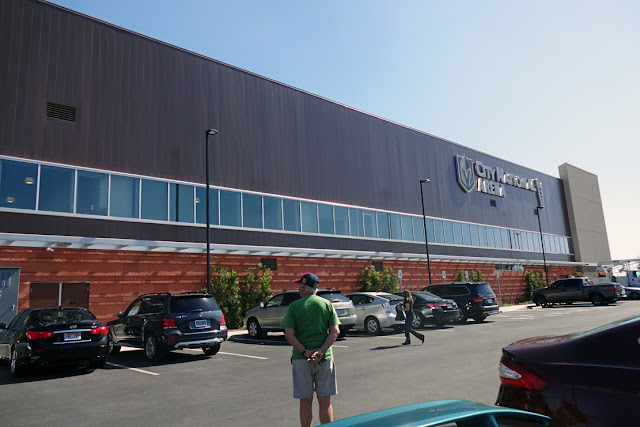 Going into their gift shop. 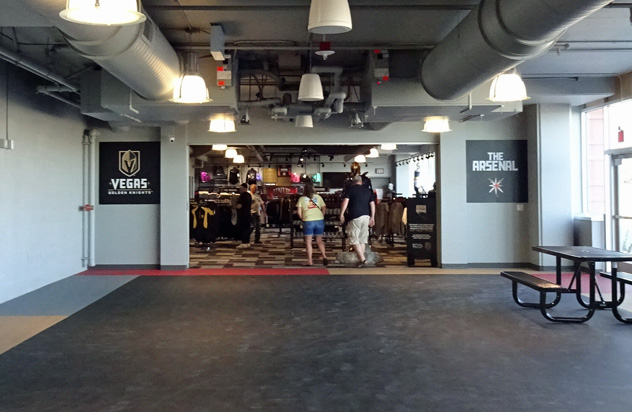 The gift shop is called The Arsenal. I looked around and didn't see any shirts. So asked - SOLD OUT. But they'd be getting more in. This was our first trip there. 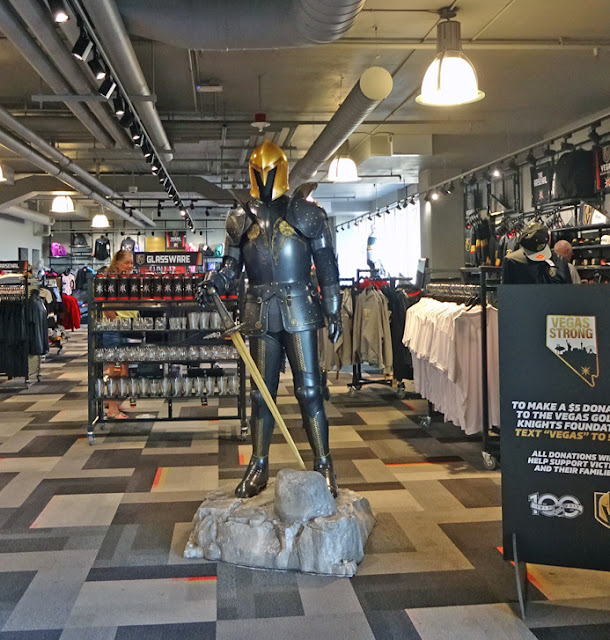 Yesterday we had to go across town to set up our mail forwarding box so since we were over there we stopped at the rink again. The day before yesterday I'd called the shop and was told by a young man that he was going to pick up a load of the shirts yesterday morning and they should be in the shop around noon. He asked for my name and phone number and said he'd call me when they got there. Well we already across town and it was after 1:00 so we went to the rink again. No shirts, told they wouldn't be getting any in and I should order them on line. Only problem was they wouldn't be shipped until end of October. So on home. Later yesterday evening I got a call from the young man. He had the shirts and would hold two for me if we could get there today. YES.
Up early this morning. In time to see the sunrise. 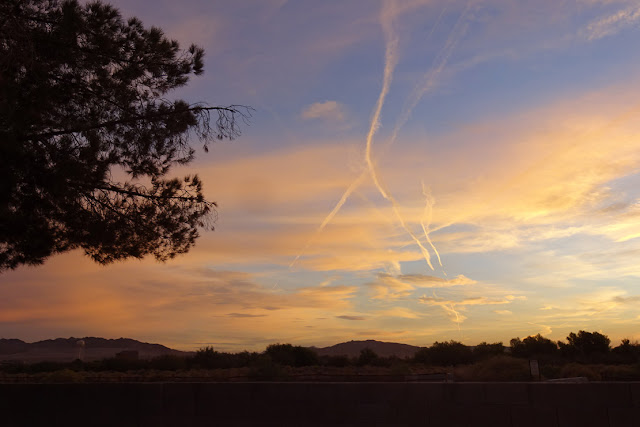 The jets contrails are really lit up. 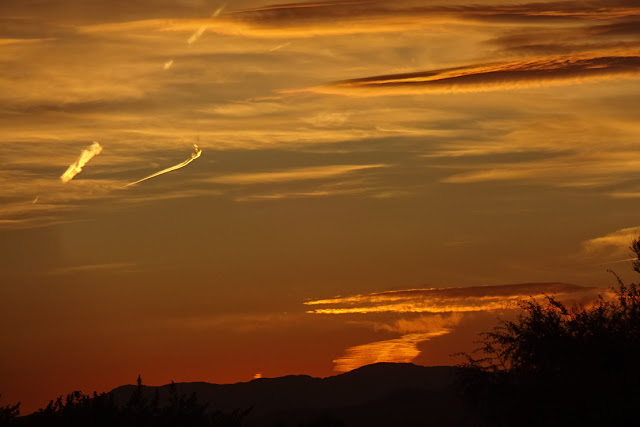 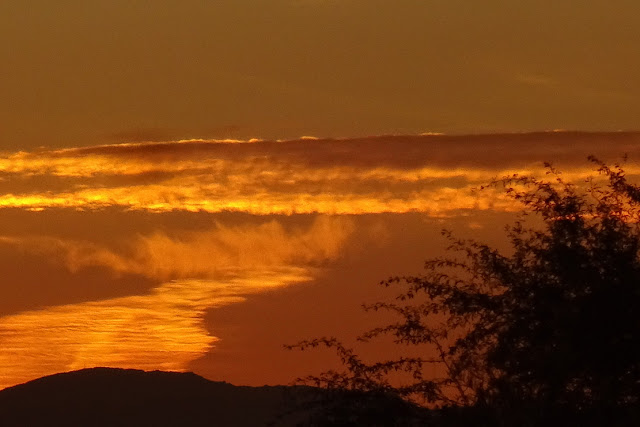 So here we were this morning at 10:00 back at the arena. There are two rinks there. One for the Golden Knights practice the other for the public. 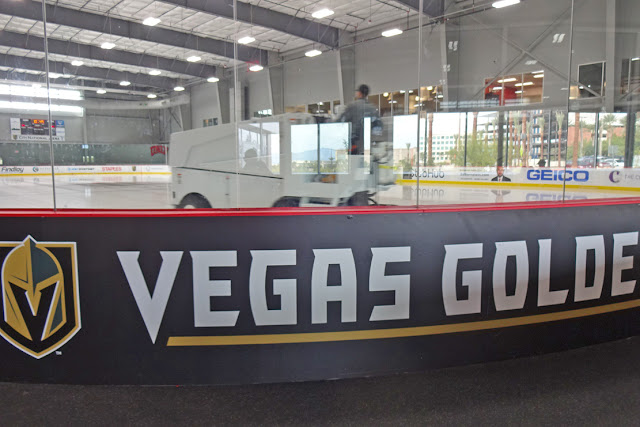 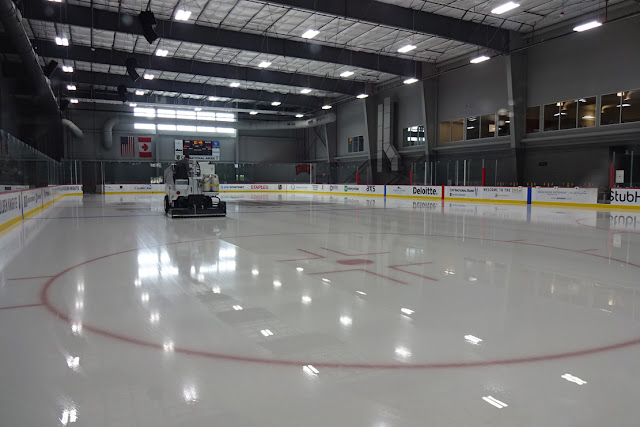 And we got our shirts. This is the logo on the front of the black shirt. The Golden Knights logo is the star and swords at the bottom. I guess persistence pays off. 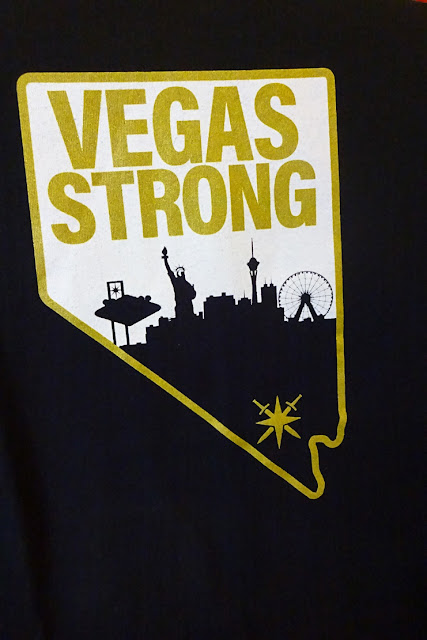 Bill is outside cleaning up Willie and starting to load him up. We have bags all over the house with stuff to take in them.
Posted by Carol and Bill at 2:39 PM

Do you know when you are leaving - we are in San Antonio and cross the border on Monday?. Safe traveling and hope to see you in Mazatlan before we head further South.

We will probably cross into MX on the 1st - then spend a few days in San Carlos and maybe Huatabampito then on to Maz. So sometime in the first few weeks of No