On our Sunday drive we continued on to The Arts District. There is so much to see in Vegas, if you just take the time to look for it. I've only covered a small part of the murals, sculptures, weird things, etc.
"Officially known as 18b Arts District, the downtown arts district contains an eclectic mix of galleries, one-of-a-kind stores, and restaurants just a short walk or bus ride from Fremont Street. Known as "18b," the Las Vegas Arts District is located immediately south of downtown Las Vegas in an area bounded by Commerce Street, Hoover Avenue, Fourth Street and Las Vegas Boulevard (at Charleston) and Colorado Avenue. Click here to read more about it.
We only drove through a very small part of it.
Tribute to the Raiders? 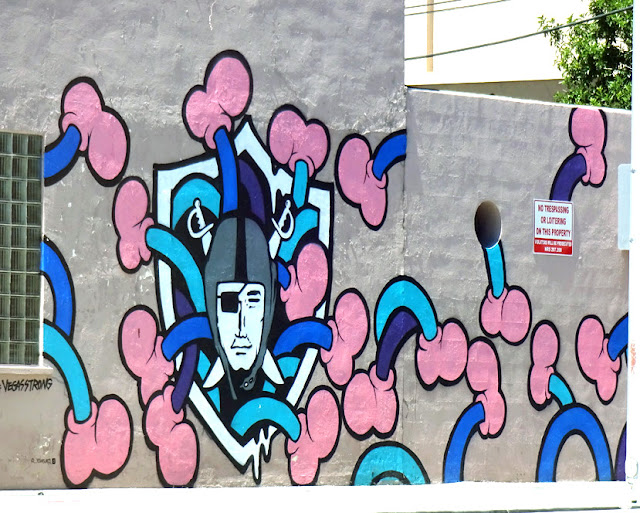 One of the businesses in the area. 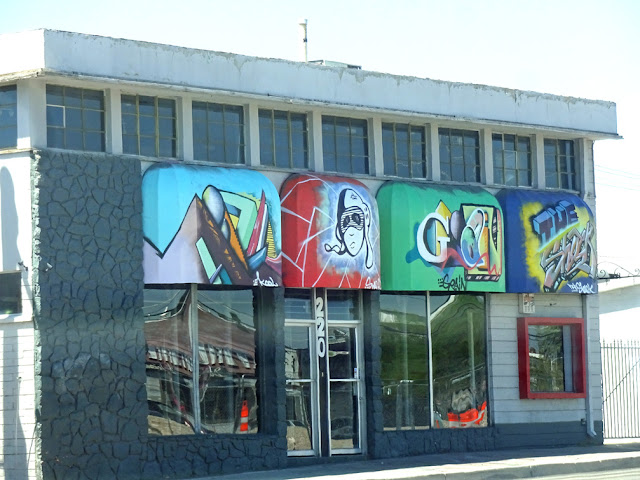 Just caught this as we drove past. Wish it was a better picture. Really like the colors. Reminds me of my stained glass windows. In fact it would make a pretty window. 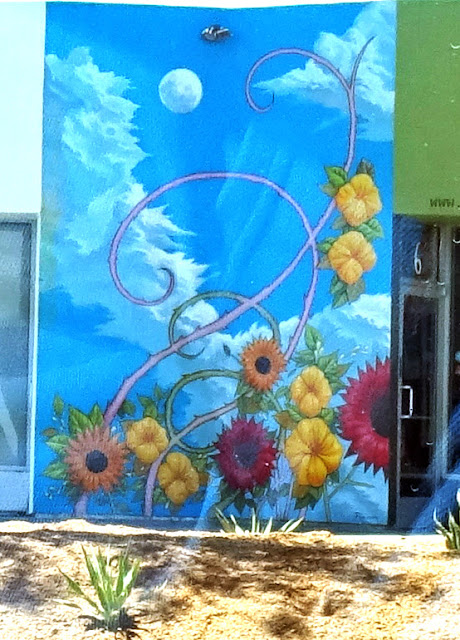 This place sells large and beautiful metal sculptures. See the life sized stage coach and horses under the sign. It is right next door to the TV show American Restoration. [or what ever it is called.] 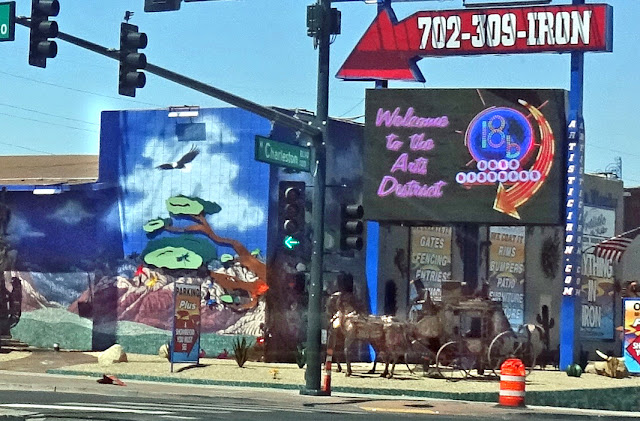 This is much prettier than the picture, its in an alley so couldn't get a good shot of it. 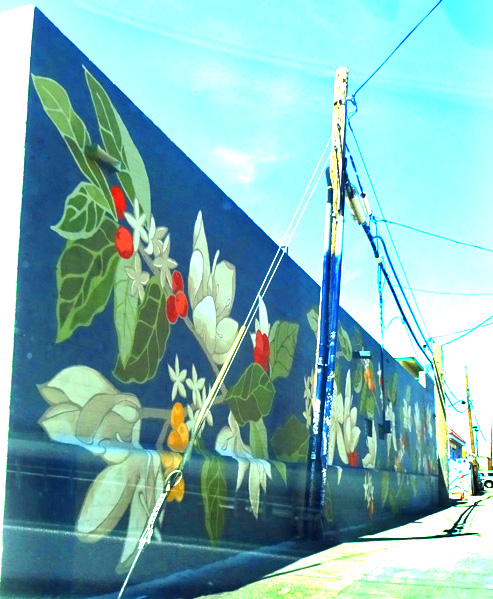 Check out the bottom of the power pole. 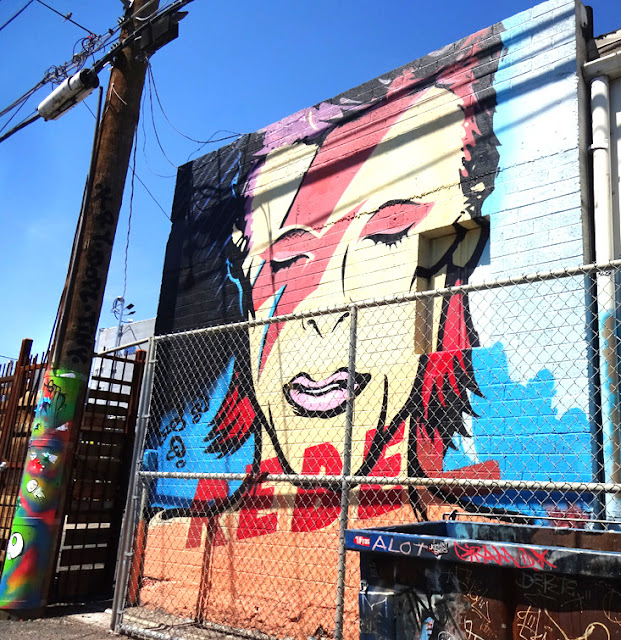 Ended up going down an alley and saw these. Really purple building. 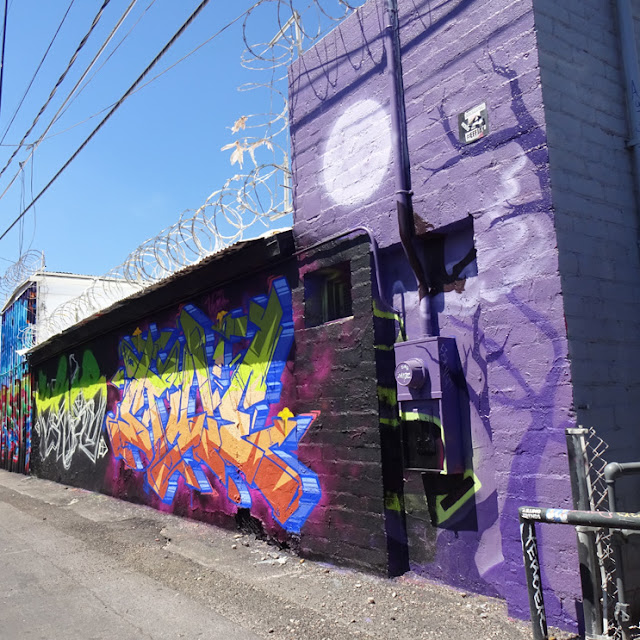 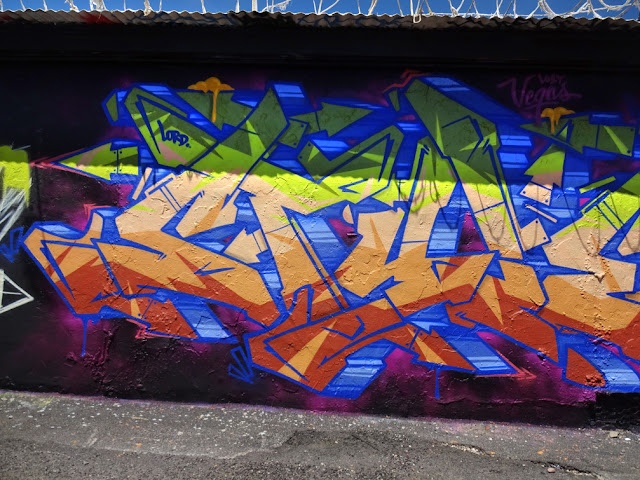 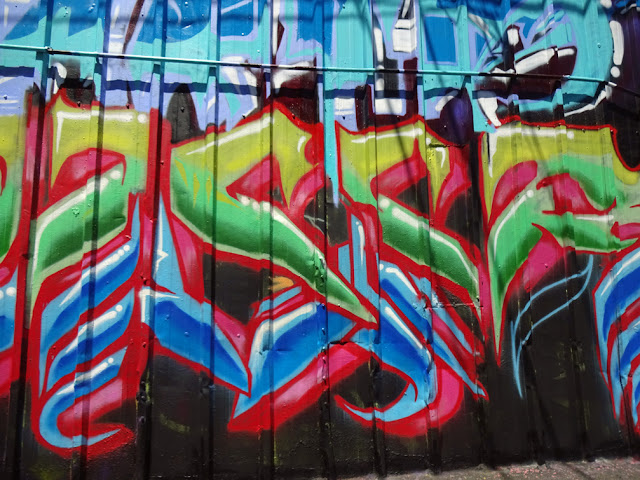 Guess it means something to someone. 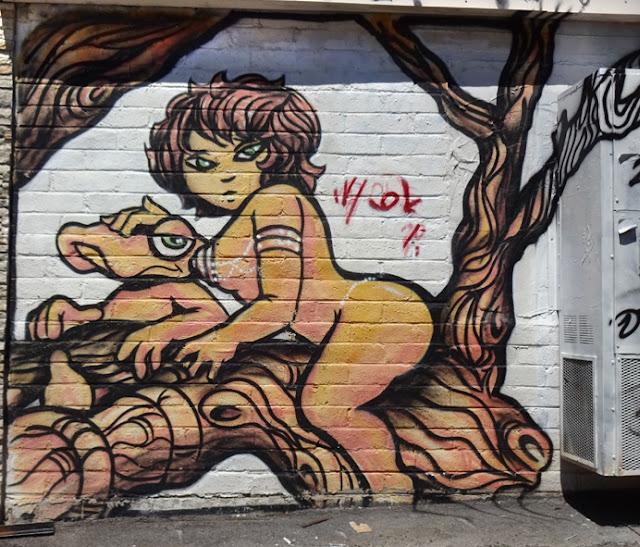 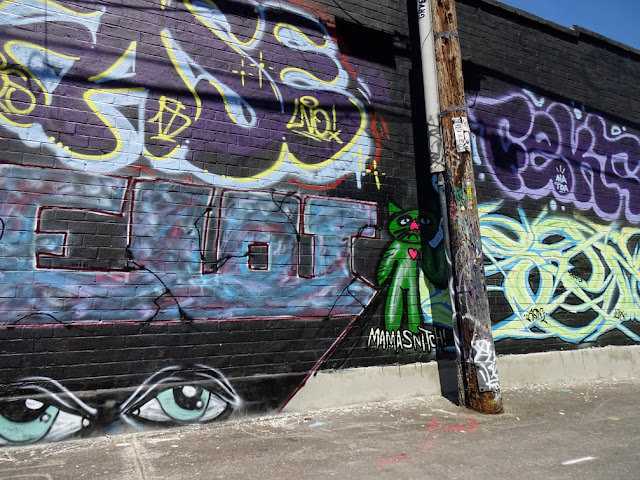 A lot of things painted on this wall, wish I could have gotten a better picture. Obstacles in the way. 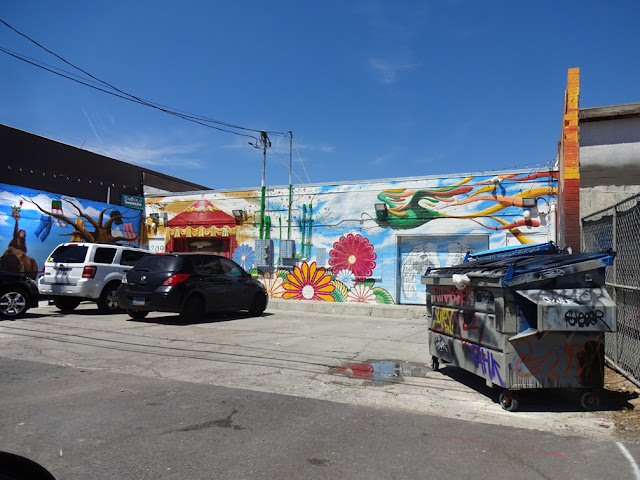 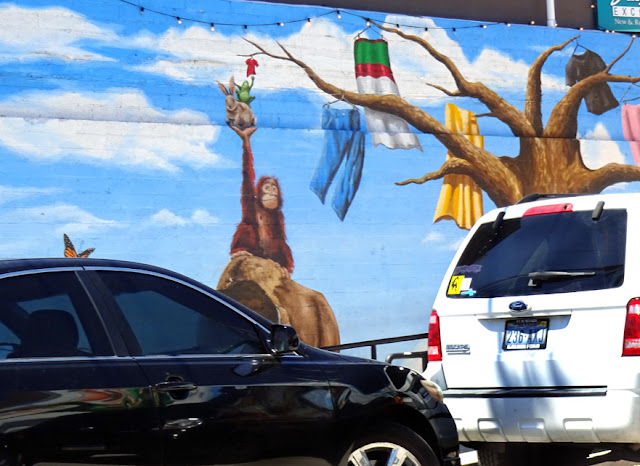 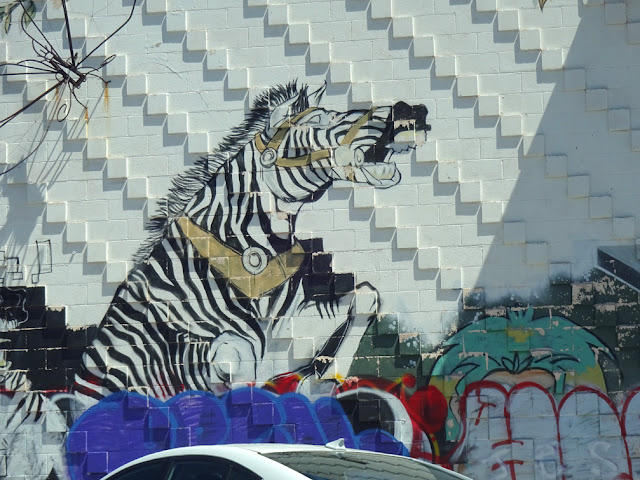 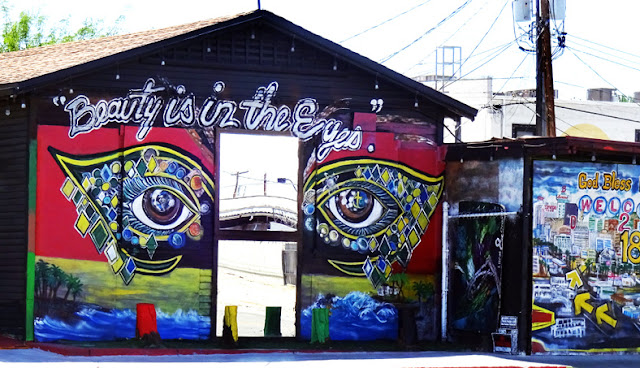 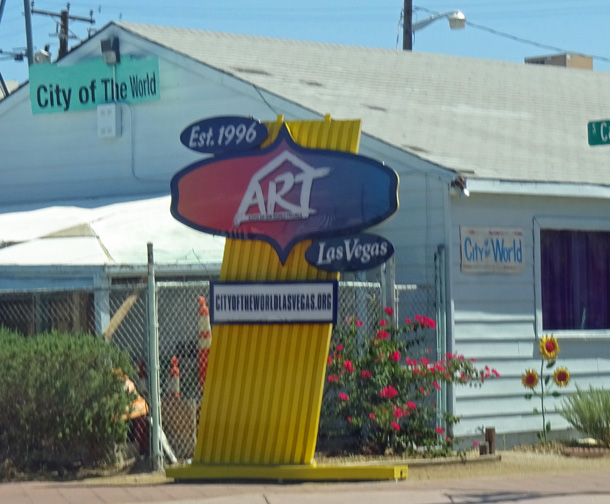 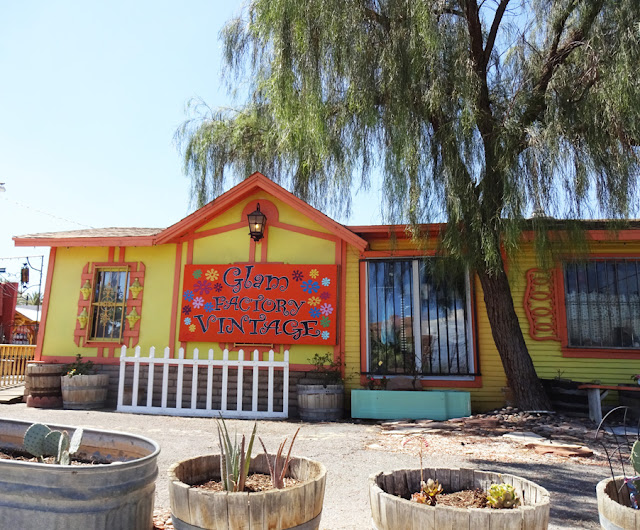 No idea what this is, private or public? Old railroad cabooses. Lots of interesting inside the fence. 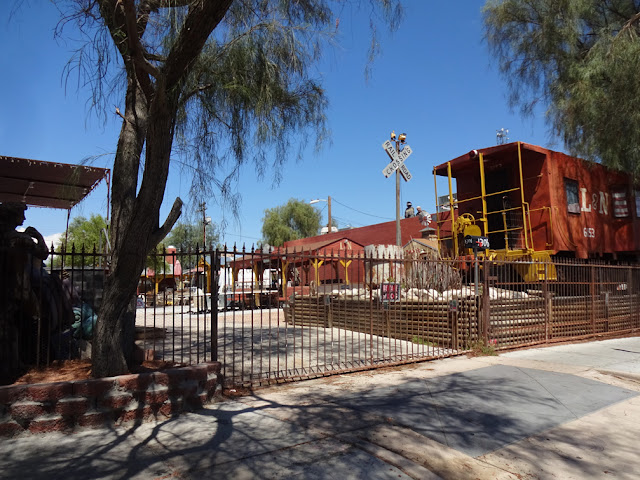 One of the cars decorated. 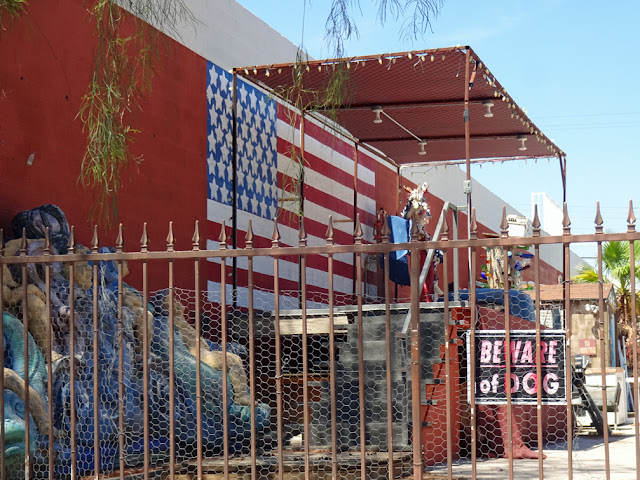 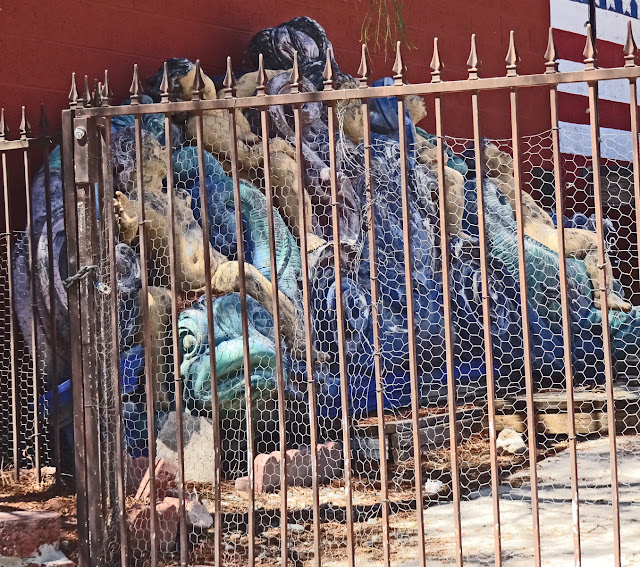 Just another view of the outside of complex. 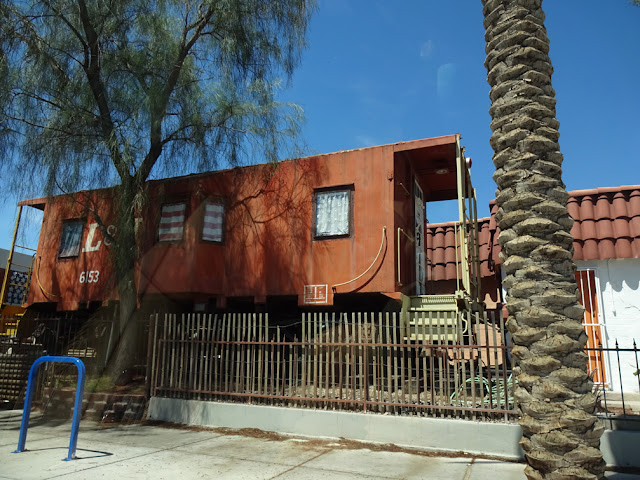 The Arts District is home to community-based murals, like the one designed by Grace Ann Morgan and Lois Dohra just over a decade ago. Pink and lavender silhouettes dance in solidarity, the figures floating above a sidewalk around the corner from what used to be called Snick’s Place, a bar that is central to local LGBT history. It’s one work from the 2005 Las Vegas Centennial mural project that stayed relevant, and it remains an authoritative example of a mural serving as a storyteller on the street. 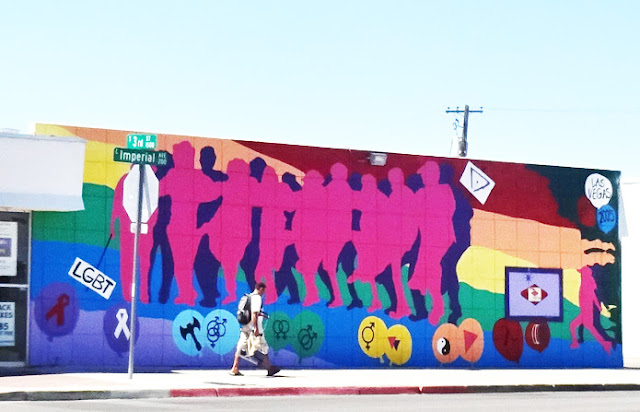 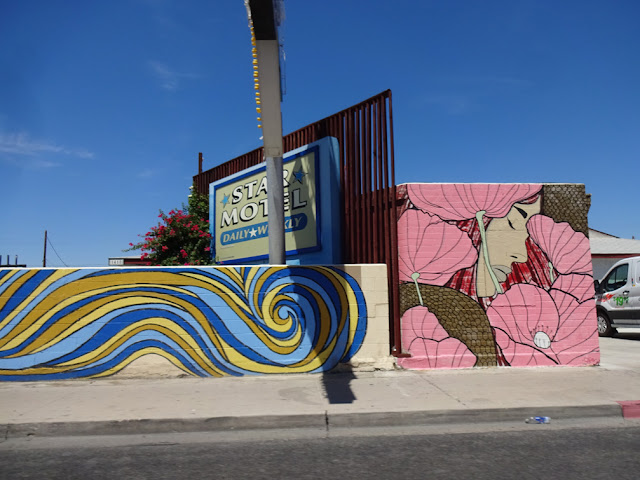 Interesting, all rocks painted different colors. See that a lot in Mazatlan. 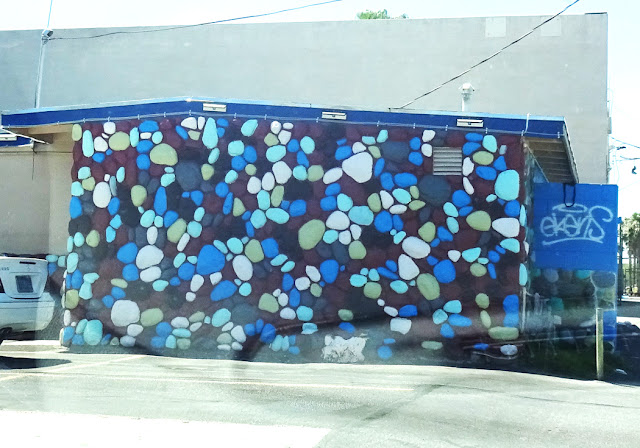 This reminds me of the buildings in Mexico too- very colorful. 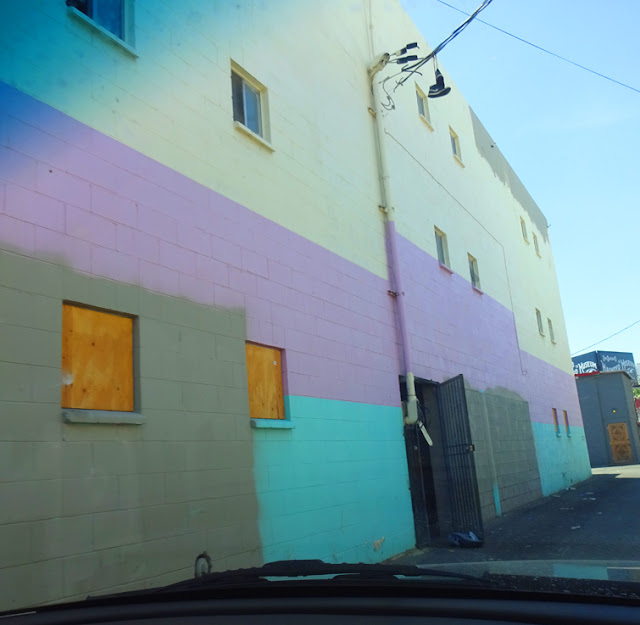 Just caught this as we drove by. 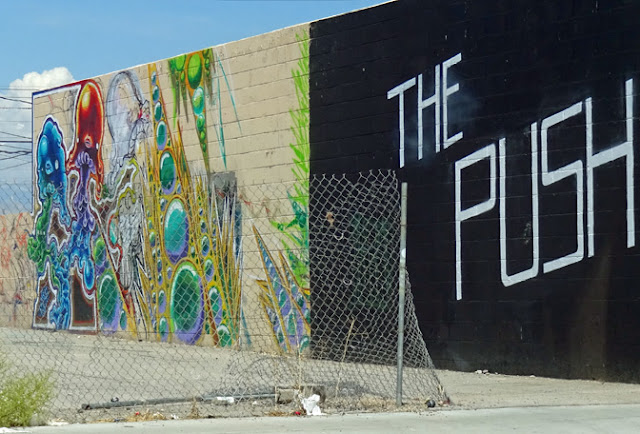 One of the older motels still open 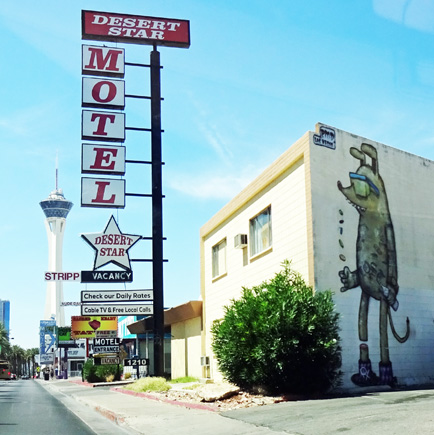 The beginning of The Strip looking south. 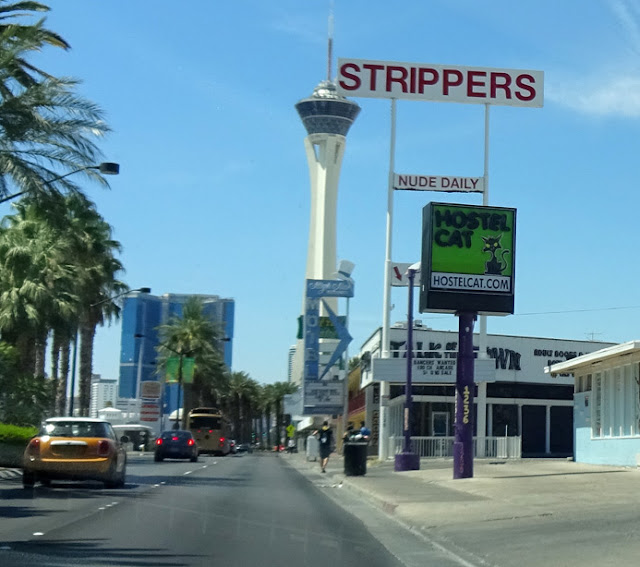 Tomorrow morning Bill has an stress test appointment clear across town at 7 a.m.! That will make for a long day, and it's going to be HOT, but less humid.
No more Arts pictures. But we've had a couple of stressful days I'll share.
Posted by Carol and Bill at 8:16 AM

These are great - enjoyed the most. Could the young lady(?) be rubbing a frog on the head waiting and hoping for her prince to appears?

maybe it is a lounge lizard -either way don't think I'd want what ever it turned into!