And a good Monday morning to all. Managed to keep kind of busy over the weekend. Still too hot to get out even before sunrise. So I walk circles in the house during commercial breaks. Supposed to be getting a little cooler at nights this week. One part of the valley got a lot of rain a day ago, us nothing. An unusual sunset. The dark cloud is where it rained. 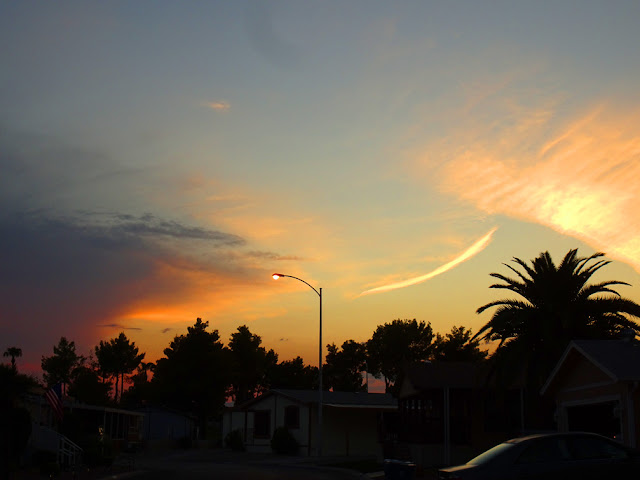 I took this from inside but never the less - the smoke in the air is really visible - this mountain  is usually very clear to see. 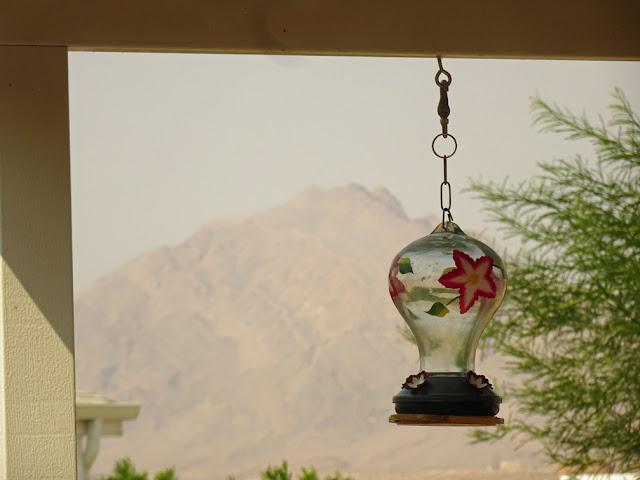 Another sunset, at least with the clouds it looks pretty. 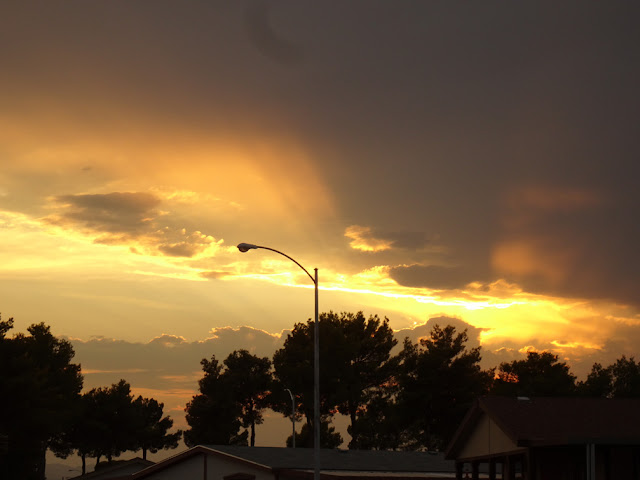 Got a new bunch of puzzles from Amazon. I really like the lion. 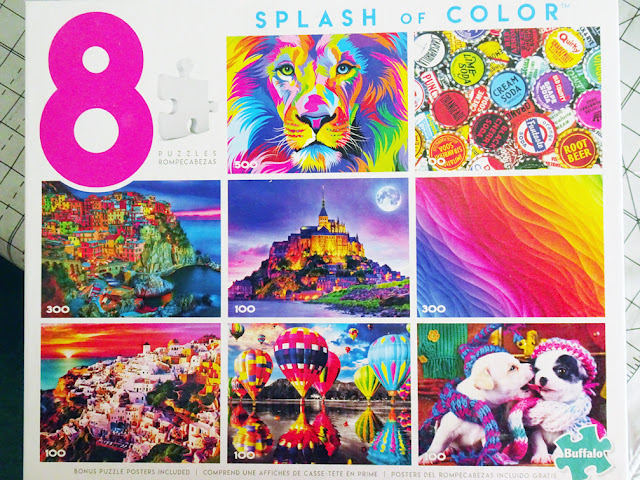 A 500 piece puzzle from the previous package of puzzles. I did the 1000 piece and took me almost a week to finish. 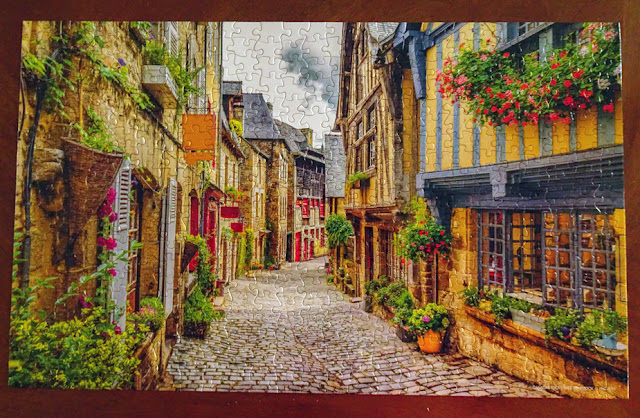 All of the hummingbird feeders were empty so made a big batch of nectar. Why did I take a picture of the pan. Well many, many years ago my first husband sold waterless cookware and this was one of the pans - I still have one other sauce pan and lid. How long ago was that - about 63 years ago. Getting my monies worth out of it. Though it has lost one handle. 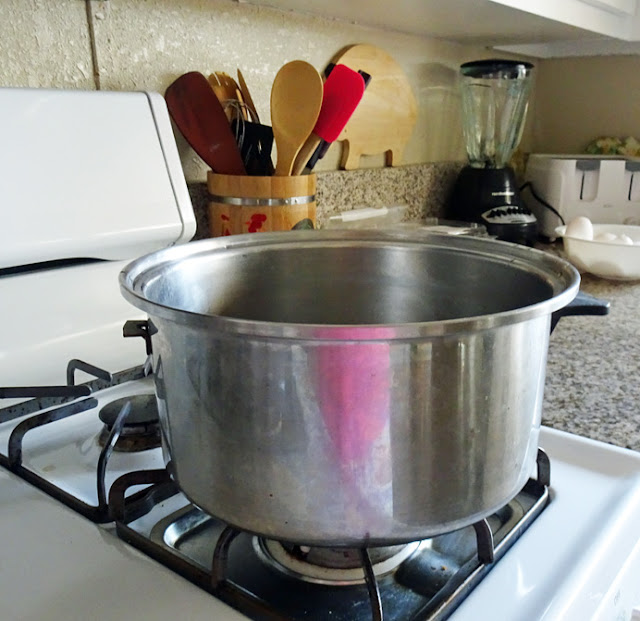 I made the nectar at night so first things in the morning we could refill the feeders, The birds were already flying around looking for them. 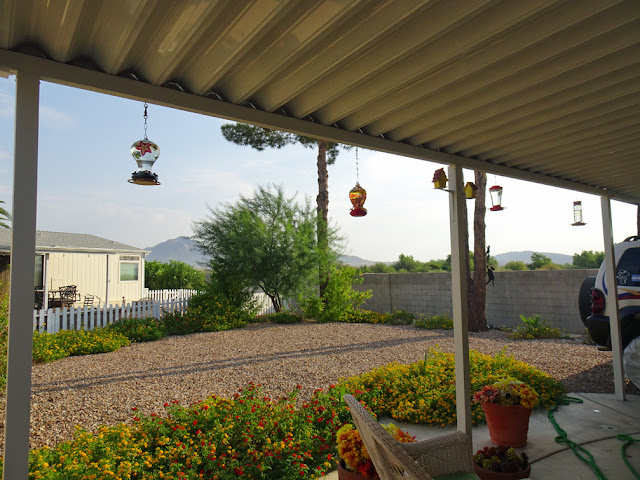 Remember my little cactus that has been traveling with us. It is really growing. Need to get it in a bigger pot, but afraid we'll have to break the one it is in to get it out. So haven't done it yet. 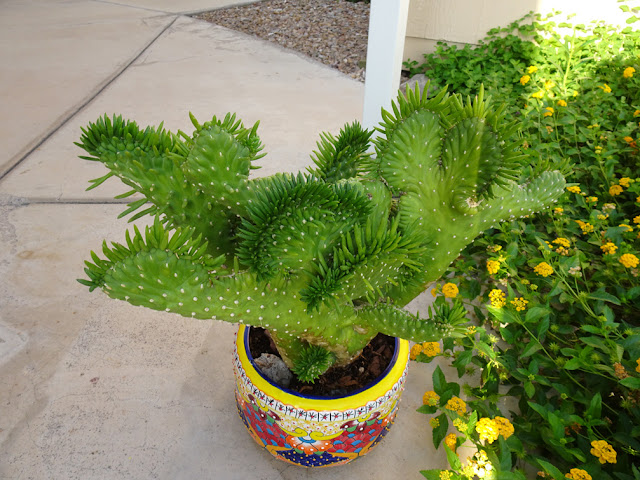 I decided I wanted eggs for breakfast yesterday. I got one egg out of the Styrofoam container but when I tried to get another one out all I got was the top of the shell, the rest of it stayed in the container. Nuts! So I tried the rest of them, several were stuck to the container. Managed to get these out kind of. 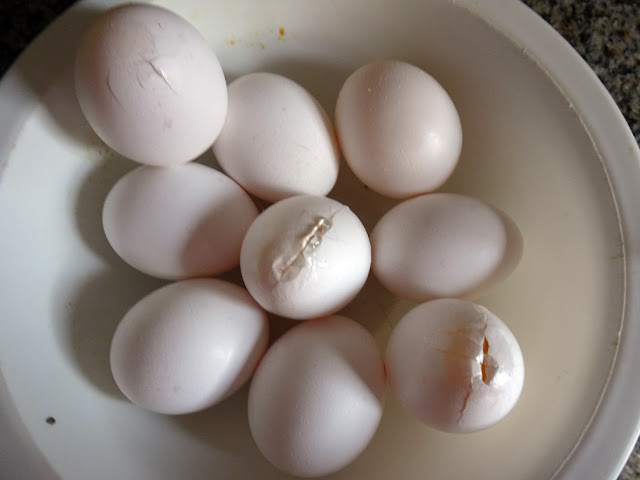 These no way were they coming out, so cut up the container. So what do you do with some broken eggs? Well make brownies of course. Guess I'll wait till next week to start losing weight. 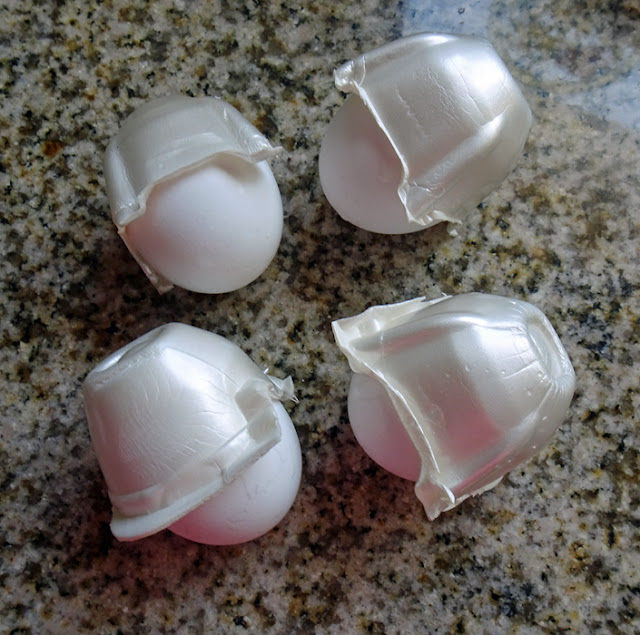 So about the decisions - yesterday was a full sports on TV kind of day. The Champions League for soccer was on. 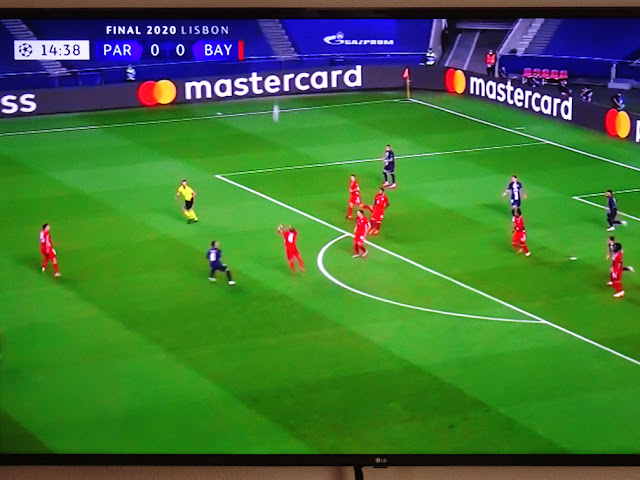 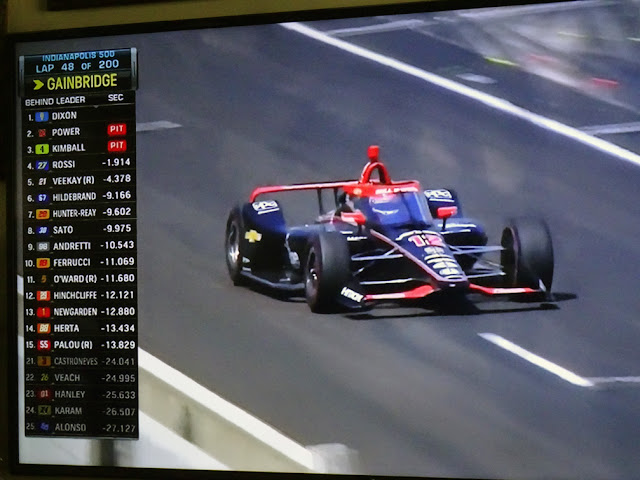 The NASCAR Cup race. So I was switching back and forth among the channels. Bill watched the soccer game in the sewing room. And then later in the day the Vegas hockey team played and won. 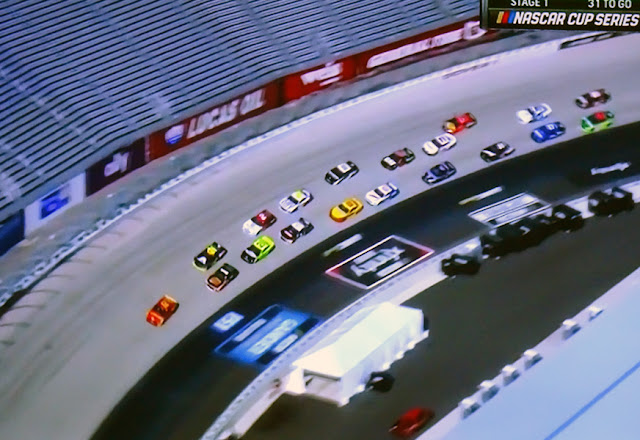 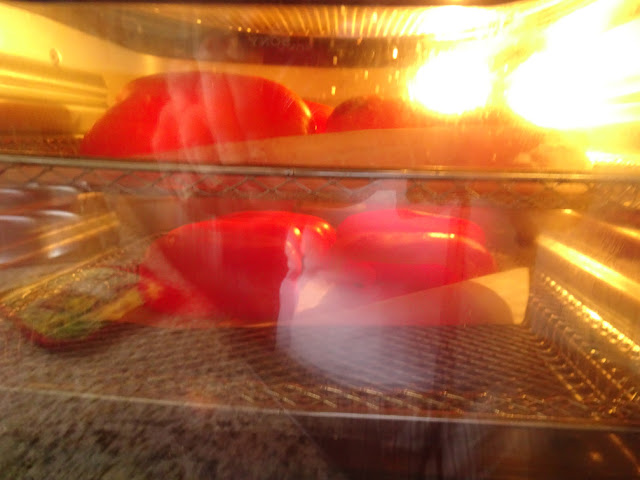 Then last night I used it to make dinner. The corn I boiled - the salmon and potato wedges were done in the air fryer. Both turned out really good. I even use dour pretty hand made Mexican dinnerware. 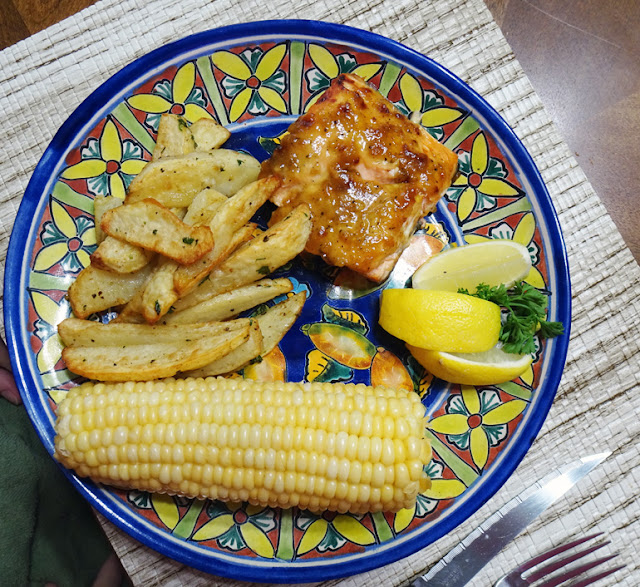 Making work - Bill needed something to do so he decided to make crepes. Beside it would also use up some of the broken eggs. If I tried to flip one it would end up on the floor, but he has never dropped one. And doesn't use a recipe so I've never learned how to make them. 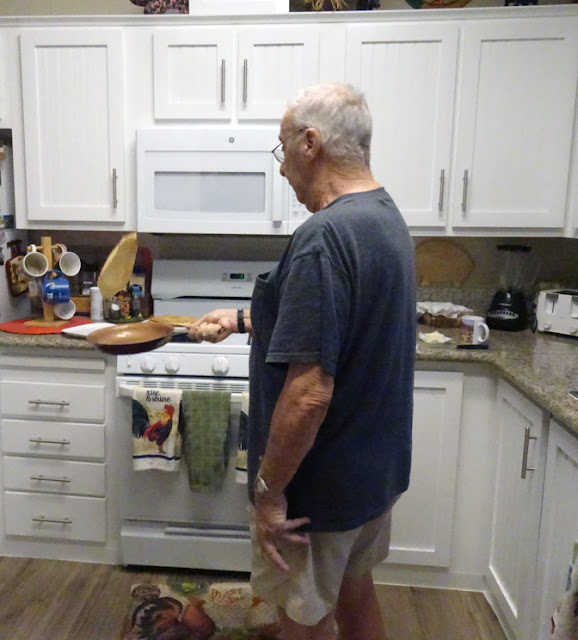 He makes quite a few at a time. We eat them as snacks with dulce de leche [caramel] in them. 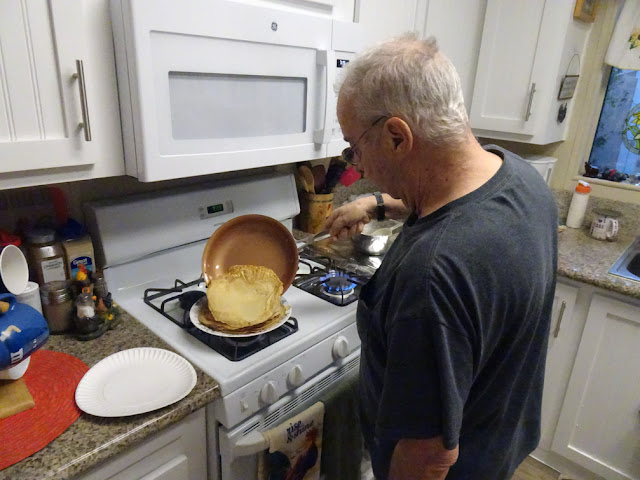 This mornings sunrise with all the smoke from California still hanging around. 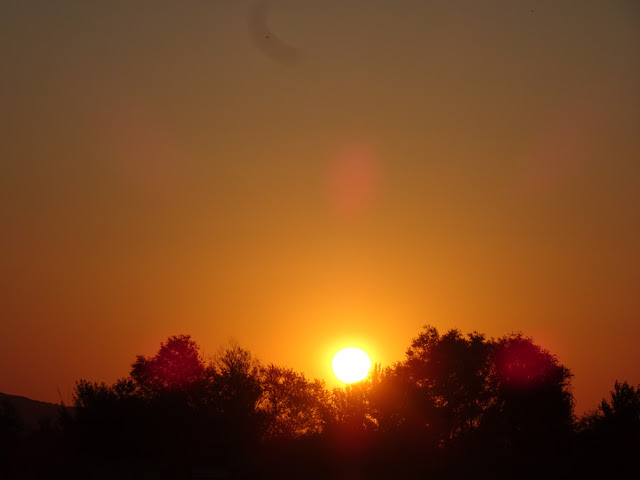 Got our grocery delivery at 8:00 this morning. Substituted three things, but the substitutions were okay. If they aren't you just have to contact them and get your money back - and keep the items. And did three loads of laundry. So done with chores for the day. And it is only 10:30!!!

I have chickens and make a lot of crust-less egg pies when I have a lot of eggs. I throw any leftover veggies I have in it, really quick and easy.

Bill those Crepes look a bit different than the ones we get in Mazatlan. But I'm sure they are good and tasty.

Mark, I will make them for you wen we are in Mazatlan, you will like them..!! looking forward to see you, believe or not.. we miss you. Bill

Bill, I might just take you up on that offer. Looking VERY MUCH to seeing you and Carol in Mazatlan in 4 and a half short months. I miss you both a bunch.

Your dinner looks so very good and the plate is beautiful. Love the photo of Bill flipping the Crepes - he is an expert from the looks of it.

He is an expert over all cook!
I love the plates too, It always makes me nervous when I take them out of the cupboard to use "what if I break one?
Then I think what if they are never used...that is worse. So going to try to use them more.