It is going to be a little cooler today - thank heavens - ONLY 108! But heading down to 104 in a few days. Looked out the door to back yard and was greeted by two bunnies and three hummingbirds. Smile to start the day.
It was nice to have everything done and everyone out of here. I managed to vacuum, mop and dust everything so it looks good in here. Also got all the rest of the stuff put back where it belongs.  Watched the astronauts land yesterday. Actually was watching them and missed the first part of the NASCAR race. When I turned the race on, the #18 was not racing??? He hit the wall a couple of minutes after the race started - blew a tire and that finished his day. Just not his year. Champion last year and no wins in 20 races so far this year. Oh well.
I got brave and tried the air fryer again. This time to do eggplant pieces. I want to know how to cut things into same size pieces; that seems to be the hardest part for me. 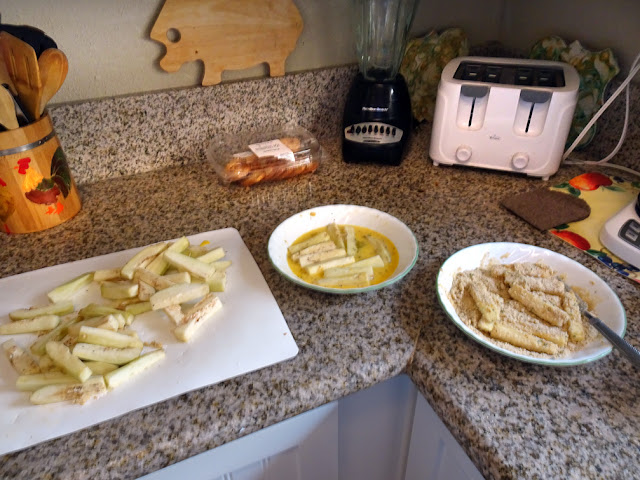 We keep the fryer stored under the cabinets but to use it I have to pull it completely out and turn it sideways to keep the exhaust from heating the cabinet up. I'm thinking this won't work in the RV. 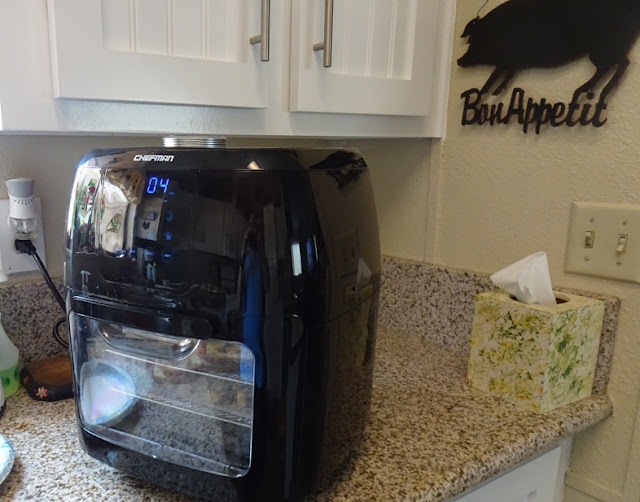 They turned out okay, but think they needed a dipping sauce or something. Just don't taste the same as FRIED ones. 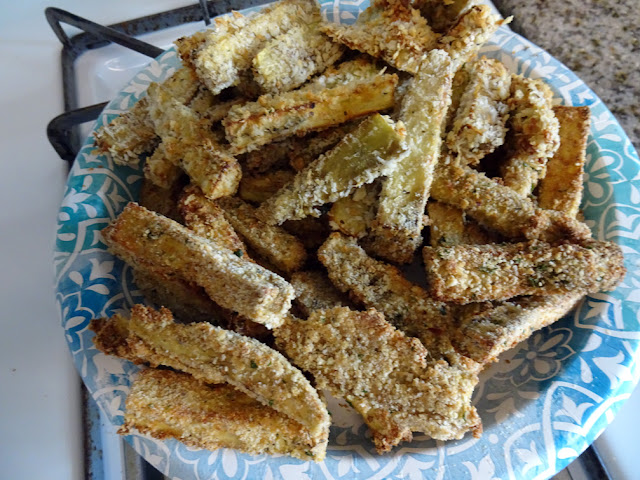 I opened my box of 12 puzzles and have done two of the 300 piece ones.  It relaxes me to just listen to music and work a puzzle. 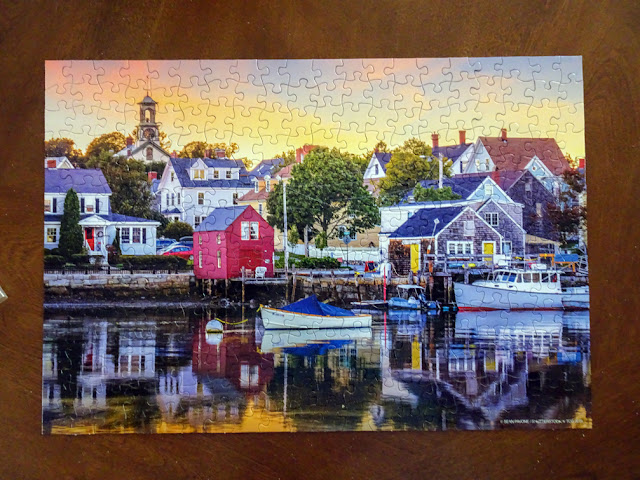 Got out and took a walk this morning - got a longer walk in yesterday morning. But had to do it a little after five. This morning it was quite a bit cooler out so waited until around six. Guess this place just moved in. At first I thought it was getting ready to be moved out but then took a better look and could see a lot of new pieces and patching on  it. I like the windows. 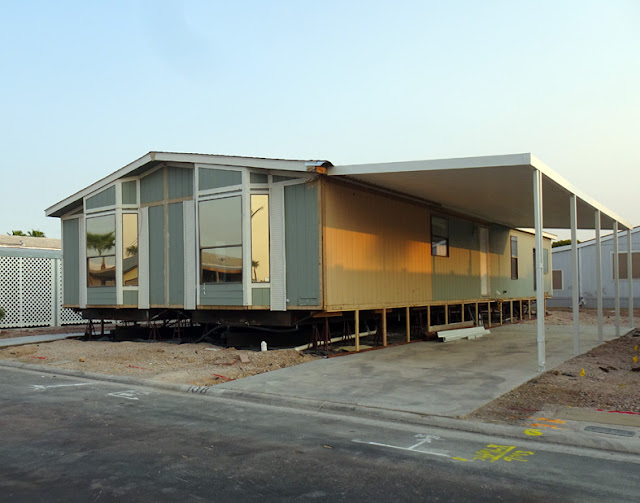 The "dog walking" area around the club house and tennis courts. 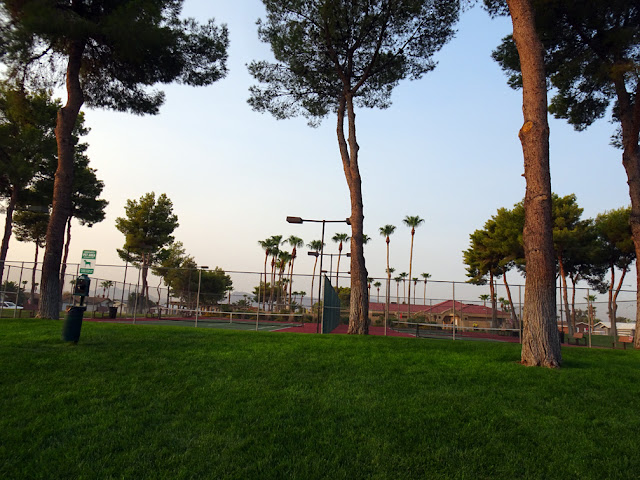 The sun was up but there is so much smoke from California's Apple fire it was not boiling hot. 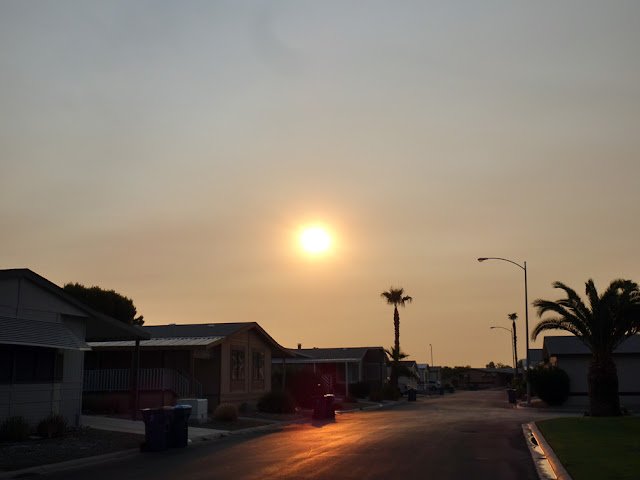 The contractor is here with the new ceiling fan. The old one was so dirty - don't think it ever got cleaned since it was put up. Even if I'd been brave enough to go up a ladder I don't think I could have got it clean. 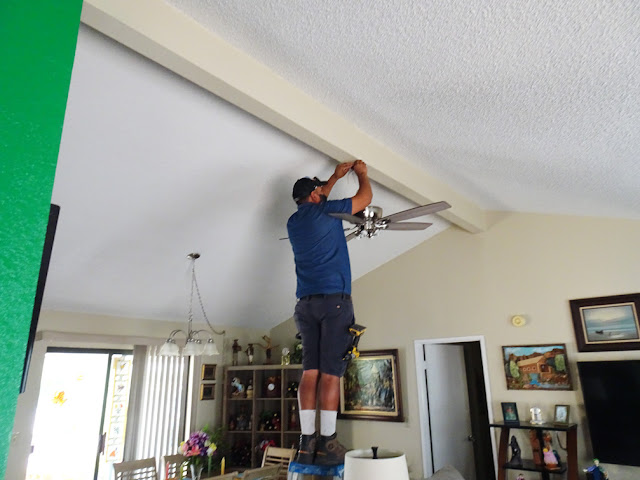 He is also going to replace the yellowed plastic over the ceiling lights in the kitchen. Well this is nuts. 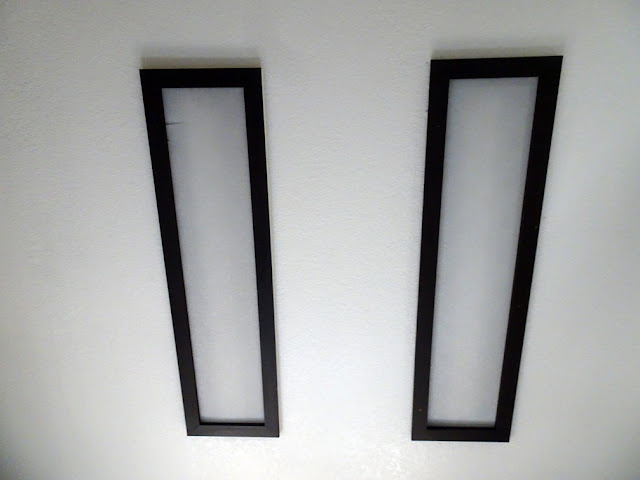 Who ever last changed the tubes or the plastic put them back up with NAILS through the wood frame AND the plastic. So contractor told us when one of the tubes goes out to call him and he'll change the whole mess.
On Saturday I had to pick up a prescription so we both also got the first shingles shot. Except for sore, warm  muscle no reactions to it. Will get the second one in October.
Wow the AC didn't come on until after 9 a.m.
Posted by Carol and Bill at 10:06 AM

You actually eat eggplant! I always thought you made it just to get back at us kids!

Yes, my shingles shots was a sore arm, too, but worth it to avoid shingles, I hope. I've never had shingles but I've heard it is absolutely miserable.

Unknown - yes we eat it. You should too, it is good for you.
gumo - terrible disease - My Mother had them and her life changed - she really slowed down after them.

Unknown - that is a funny comment - you must be a son. When my kids were growing up and I said I need a dinner suggestion and no one answered I always answered " OK, Potato Soup it is". That was not a favorite with either of them. Funny, these days they both love it.

Just wanted to mention I love the big print on your blog. I read it on my cell phone and it makes a huge difference.

Been busy getting ready for renos. First job is Aug 27.
John took more bags to Good Will today.

So glad that life is almost back to normal for you. Nice that you are out walking. That is the largest air fryer I have seen not that I have seen a lot but it may be tad large for the RV.

Sandy - yep one of the sons, I thin k I know which one, but not sure.
Kathy - thanks, some of the blogs I read use small print and I have trouble reading them. So...
Jackie - good luck with your reno. I am so glad everything is done now.
Contessa - I am glad that everything is done now. But at least when they were here working the day seemed to pass quicker. Now by noon I feel it should be almost time for bed. Went out to walk this a.m. at 7:00 already too hot, cut walk short. I think the size will be oaky but worried a little about the heat it puts out.