We had a rather quiet weekend either watching TV or beading and cooking on my part.

Saturday afternoon watched the NASCAR truck race and my favorite driver won the race. In the evening we watched the Las Vegas Golden Knights hockey team win their game in over time. Sunday morning saw Barcelona soccer come from behind to win their game and keep their title hopes open. And Sunday afternoon watched the NASCAR cup race and again m y favorite driver Kyle Busch WIN the race. He needed the win - has had a not so good season until now.

While not watching TV I made myself a couple of pairs of earrings. A little different take off on the design of the other ones I've learned to make. 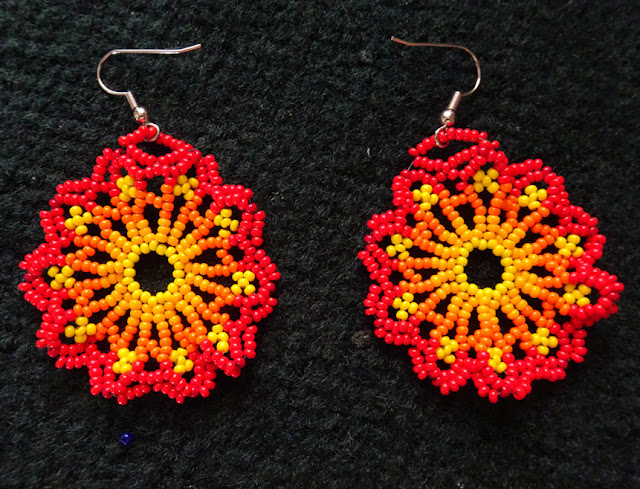 They still needed to be flattened out and formed. Think I'm gong to make a set in greens and maybe black, gray and red... 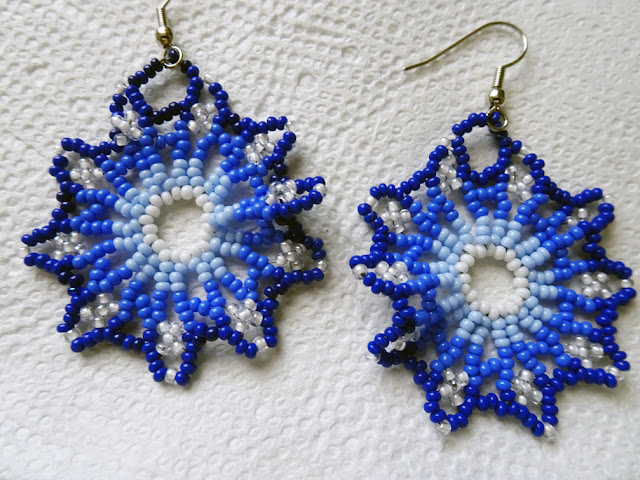 Have cooked a couple of dinners the last few days. Chicken, corn on cob and oven roasted potatoes and another dinner of paella. Both had enough left overs for lunches. Tonight maybe pork roast - or not.
It is about 2:00 now and I already have over 7200 steps in.
Went with the walking group this morning  and walked around the Wetlands again. Different trail this time. So hard to believe this is only 1/2 mile behind our home. Swimming serenely along. 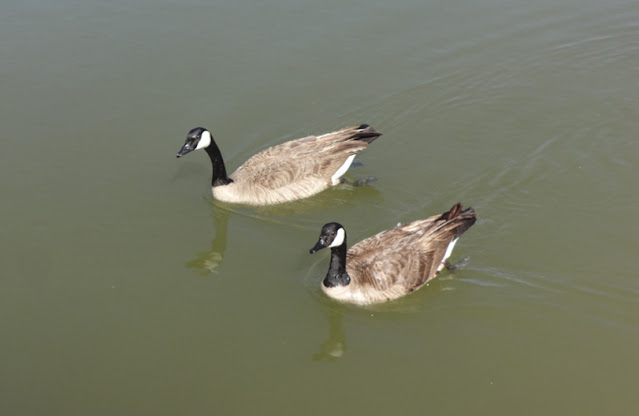 Lots of turtles on this rock. All Sizes. 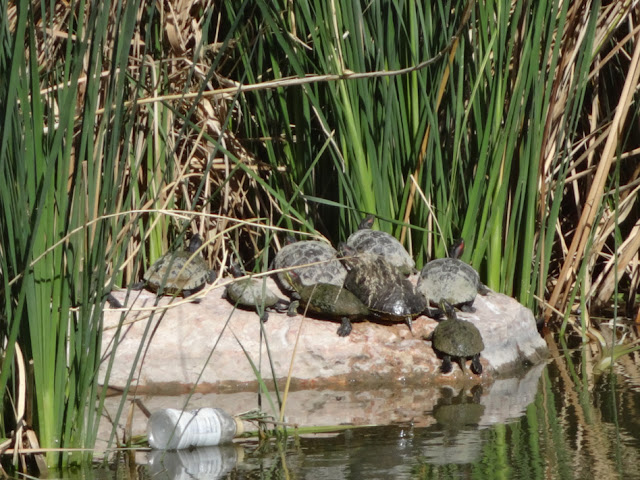 Was surprised to see a really big Koi fish in one of the ponds. The best picture I could get as the water is a little murky. 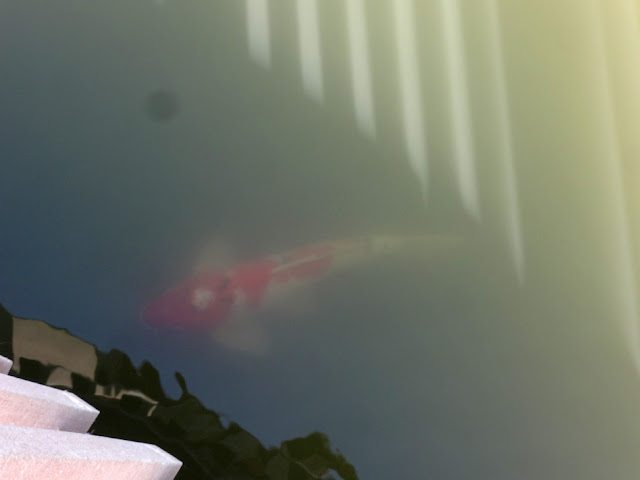 A little turtle off by himself. 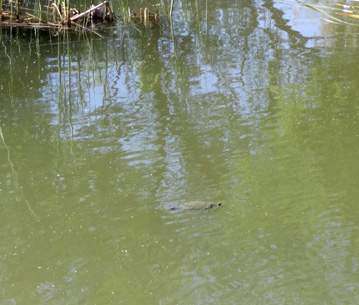 A quail, he was not to close so didn't get the picture focused before he flew away. 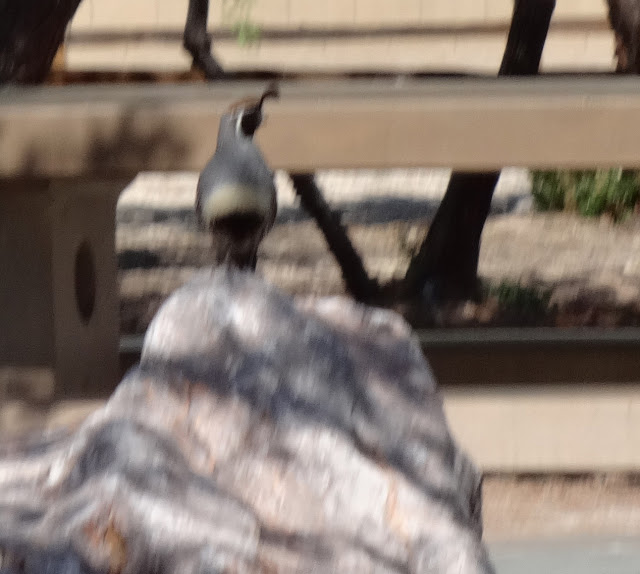 Madea short trip to the nursery to pick up a couple of lantanas to replace a couple that died when the little palm trees tried to grow in the middle of them. Pulled the trees out but too late to save the plants. Our Palo Verde tree is full of blooms. 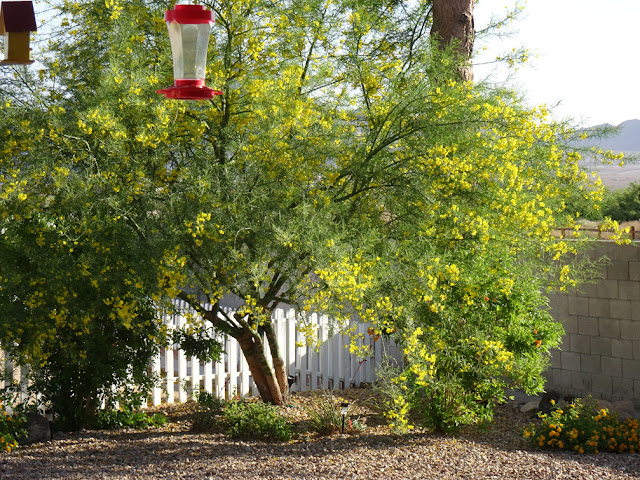 Working on a new puzzle that is driving me nuts. The colors are all over the place. I can get hunks of it put together, but can't put any where they belong in the puzzle yet. Been working on it for three days already.
Posted by Carol and Bill at 12:59 PM

Congratulations on doing so well with your steps!! Your ear rings are beautiful🧡💙💚

Funny you're the sports nut in the family! I'm happy now that my Blue Jay's are playing ball and I try not to miss a game! Glad you've found somewhere pretty to walk. The walking/bicycle path here in Maz is in full swing.Very busy in the morning but I prefer the sidewalk as there are less people. They covered up the "solo" on the path and stenciled in a walker next to the bicycle so now it's for everyone. You can try it out when you come back.

Ruth - thanks for the encouragement, but think 10,000 won't become a habit for me. Glad you like the earrings. They are fun to make.
Jackie - I like the blue ones too, not so fussy. Now I'm making a pair of green tone ones.
Kathy - I am mostly into the NASCAR, Bill is a soccer fan and both of us like the hockey team. That bike path looks nice. Hope they keep it up. You leave soon don't you?

Flying out on Saturday, getting our covid test tomorrow. Fingers crossed!