Any one out there interested in moving to the south west? Vegas or Arizona. Might want to rethink it if you don't like heat. And it is only the middle of June! No gradual warming this year - just jumped right into the high one hundred high teens.

No more walking in the mornings for me for a while. Notice it is not even cooling down at night. Some forecasts are saying closer to 120...sure hope they are wrong. That AC bill is going to be high. 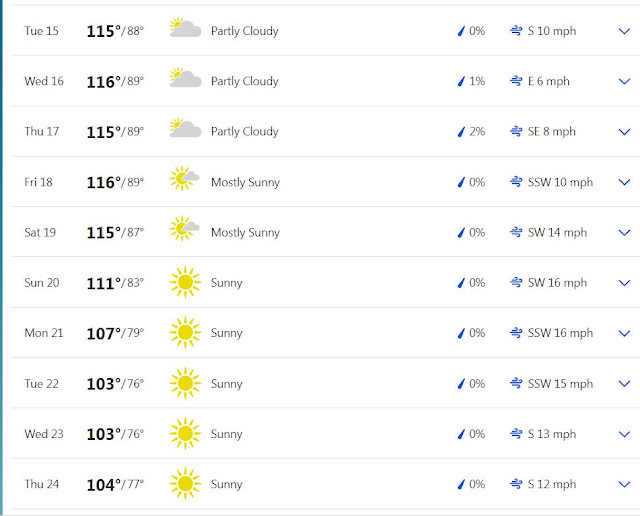 I have a box of eight puzzles from the National Park series. So far I've done four of them. Kind of pretty. And not at all easy. 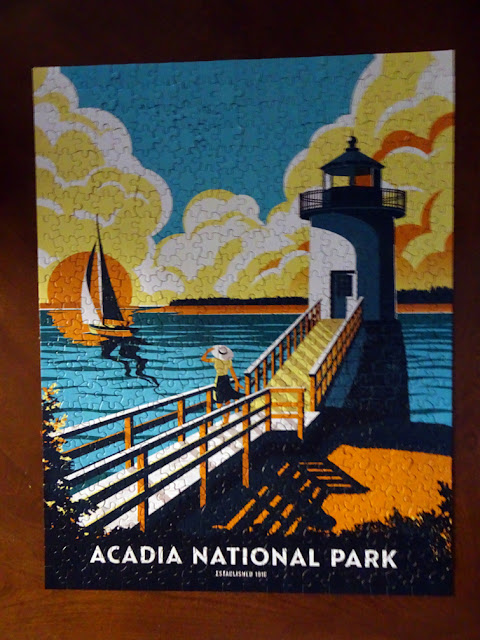 I've finished my quilt except for the label. Baby won't be here until sometime in August. But it was fun working on it. I had all the material except for the pink and the blue. So got to use up a lot of my "stash." It is a little bigger than crib size but not quite twin. 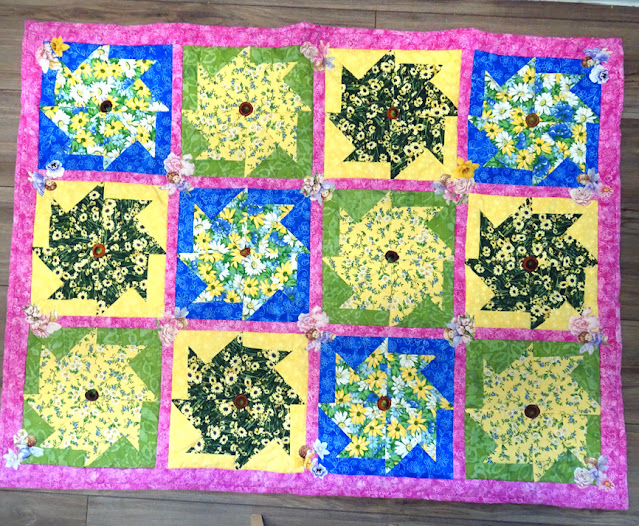 Just a closer look at the squares. For some reason I got the bright idea to add the faeries. I had the material so why not use it. Made it a little more girly, but added quite a bit more work to it that I really hadn't planned on doing. 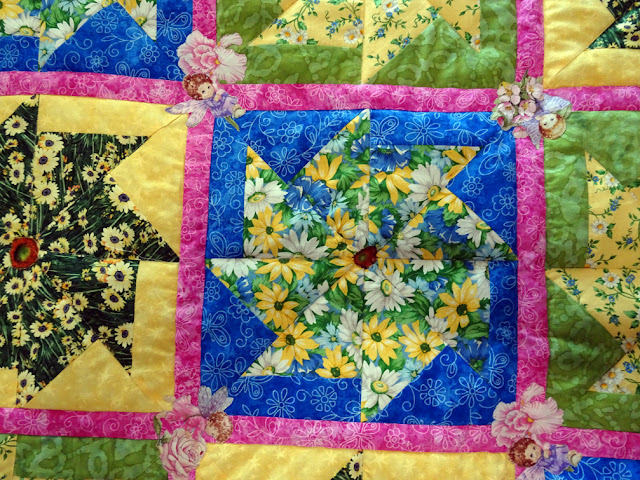 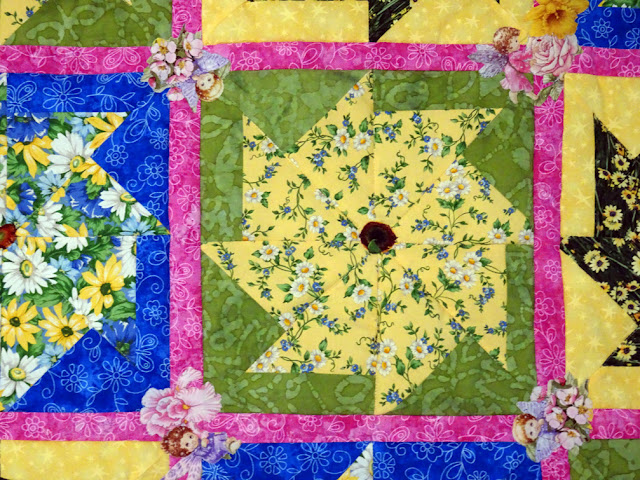 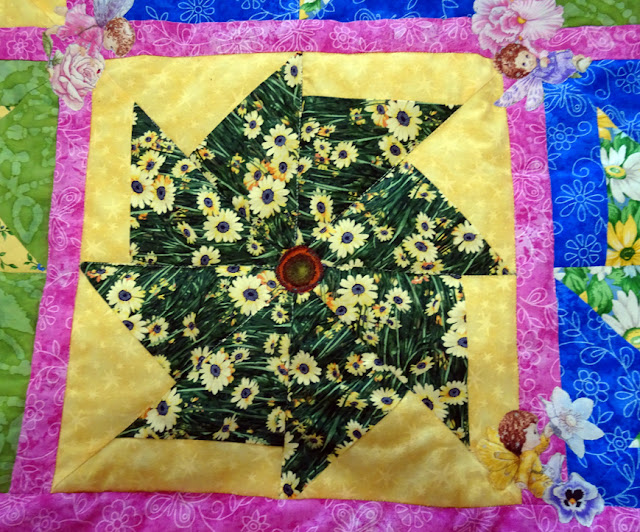 This is the backing. I've had this for a long time wondering what to do with it. 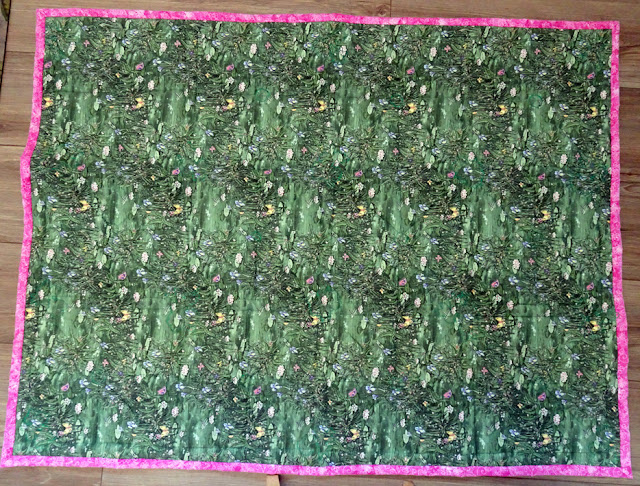 Thought it went with the front pretty good. 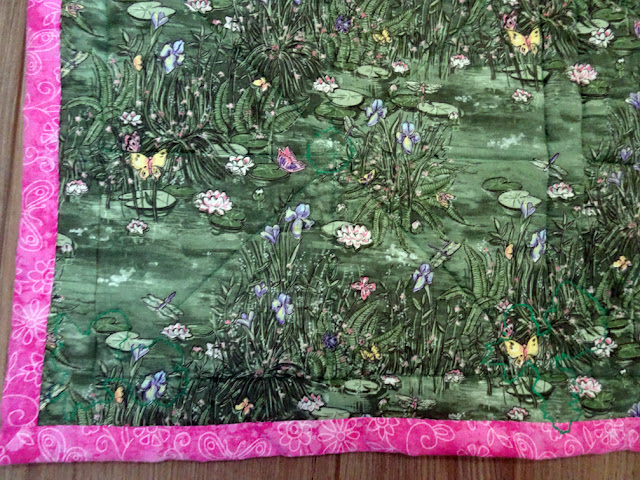 About the faeries - I fussy cut them. That is following the outline instead of cutting them in say circles leaving a lot of background material on them. Then I fused - used sticky material to put them on the quilt. Well the sticky material did not stick so well so that meant I had to top stitch all of them. 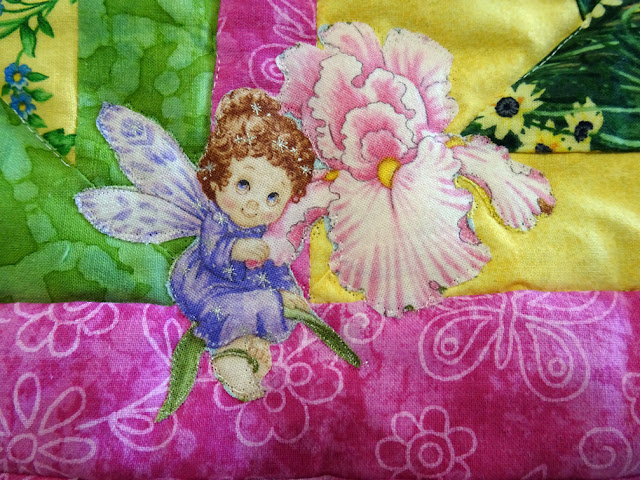 So went and bought invisible thread - it is so invisible I couldn't see it to thread the needle - which I had to buy, for invisible thread use - tiny tiny hole. So had to use a marker to color the end of the thread to see it. Then discovered I had to change the tension on the machine - crap didn't remember how to do that. Hunted for the owners manual. Okay that was easy and luck was with me everything went smoothly and all twelve faeries are applicaded  [even spell check couldn't help me there] stitched on. And you can't even see the thread!
Now I'm going to watch the NASCAR All Star race. Yesterday my favorite drivers truck team won a race and he won a race. So maybe his luck will hold today. Dennis was the only son who liked NASCAR - so missed his texts yesterday. Little things that come up.
Posted by Carol and Bill at 1:58 PM

Love the quilt Carol and I really like the background fabric. Hope you are both doing okay. Hugs!

Too hot for us. Looks like drought is also going to create more and more problems for people living in desert areas. Too many people, not enough water. I guess we never learn. Had to think for a minute..appliqued..must be French in origin. I find the older I get the more words I lose the spelling of. Used to be quite good. Love all your projects.

The quilt is gorgeous! The backing fabric is really pretty, glad you posted the close up.

Thanks for comments on quilt. Had fun making it. So much so I am trying to figure out who to make another one for. At one time I had no problem with applique - major old age brain fog I guess. But then I was never a good speller.
It is 10 a.m. and already almost 100. It is the not cooling down at night that will be unusual and horrid.

When do you head to Oregon and Washington? It will be cool on the coast, at least. Am in 99 degree Denver and not happy, so I can imagine 115 is really miserable. A few years ago, I spent part of a summer in Colorado thinking if I went up high enough, it would be cool--nope! That caused me to head north and for the Pacific Coast! Judy