We got to Rachel around 2:30 [had stayed in Tonopah to watch a soccer game.] The wind was blowing like a son of a gun! Bill's arms were tired.The welcoming sign of the Inn and RV park. 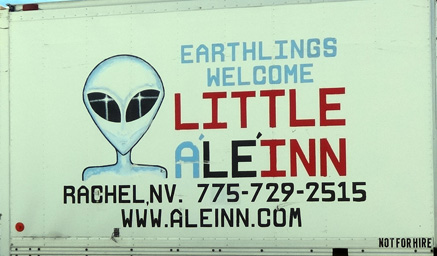 A little space ship out front. 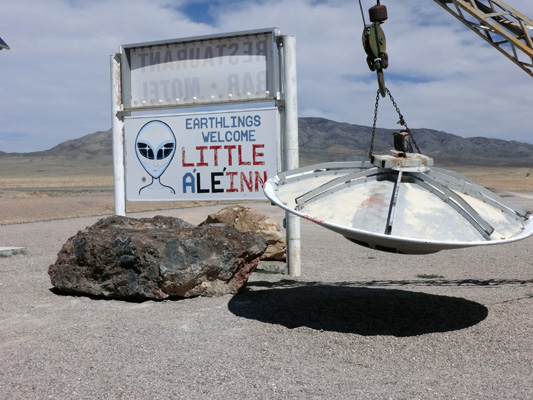 Being towed by a wrecker. It was swinging around some from the wind. You have to be little to fit in there. 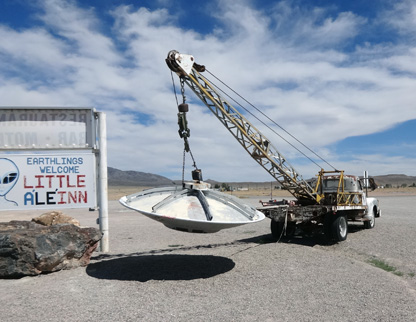 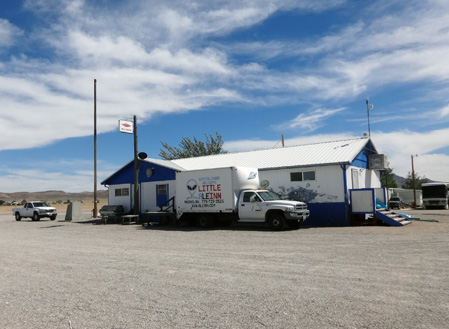 Mural on the side of the building. 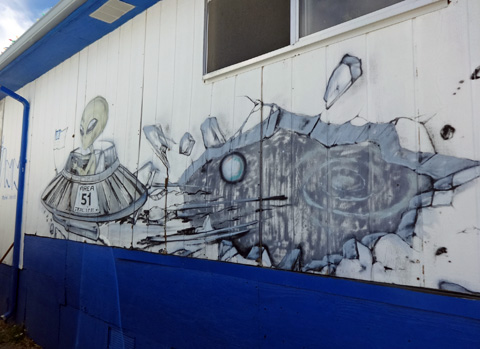 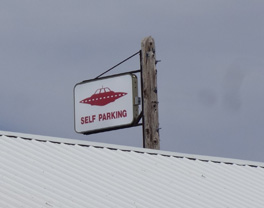 The back side of the restaurant/gift shop/office. Our view from front window. Notice the tree leaning left. 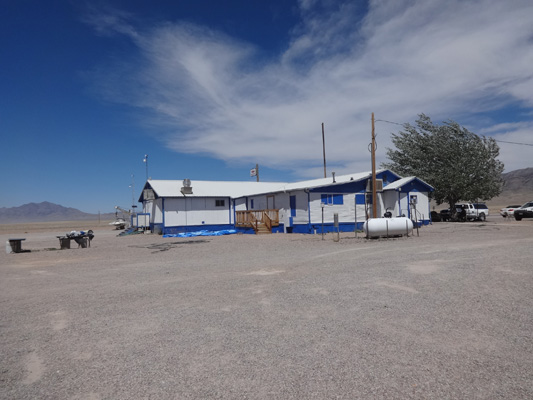 The RV park - 4 sites. 30 amp electricity, no dump. I think it had water but we didn't need any so didn't hook up. WiFi was okay. $20 a night paid for when I made the reservation the day before. By evening only one space was empty. 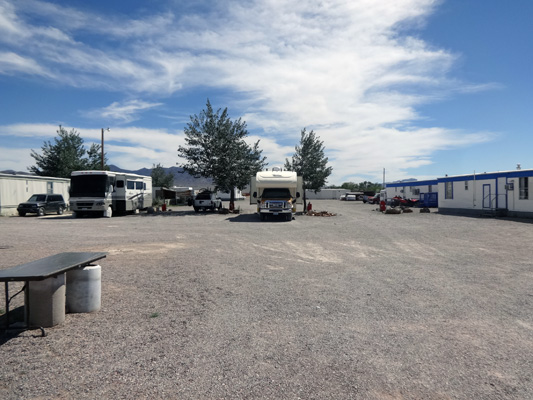 We pulled forward enough that the trees weren't rubbing on the RV. The velocity of the wind seemed to be increasing by the minute. Almost lost the door to the RV when I opened it. Luckily the wind was hitting directly on the back of the RV. 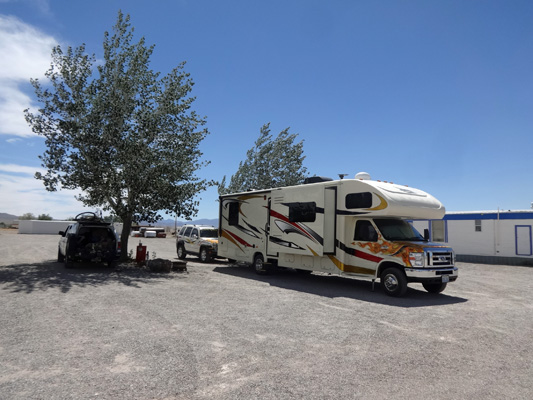 Both hungry by then so went to the restaurant. Here is Bill being watched over by an Alien. Wonder if they are thinking about studying him? He looks so different without his glasses. 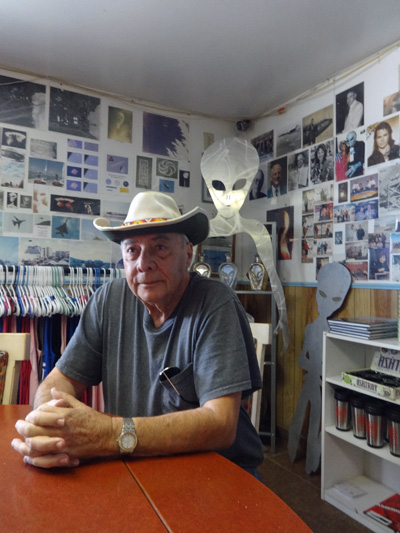 All kinds of posters and photographs in the restaurant. This is the menu. 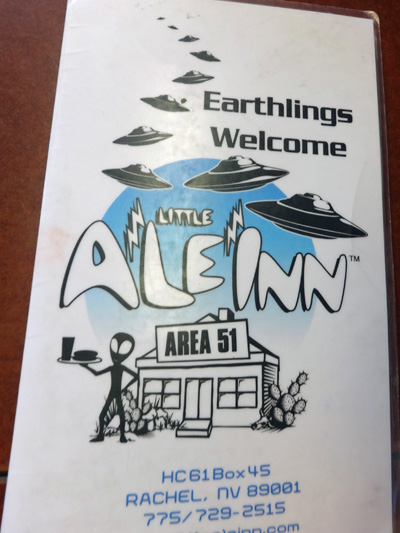 We ordered the Alien Burger, came with choice of coleslaw, potato salad, macaroni salad or chips. We both got the coleslaw. The burger was very good. Forgot to take picture until I'd already taken a couple of bites. It was not on a regular hamburger bun which I liked. Bill said he wished it was bigger. 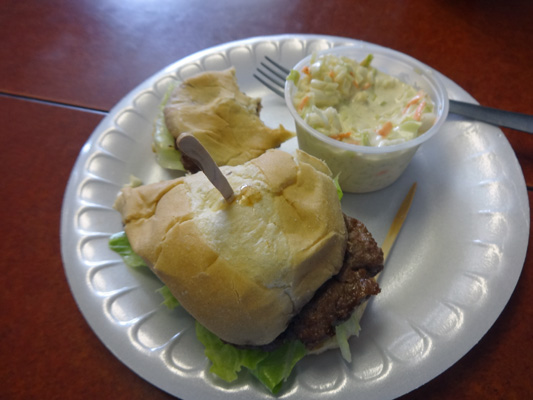 This family was hanging around by the wall next to us. 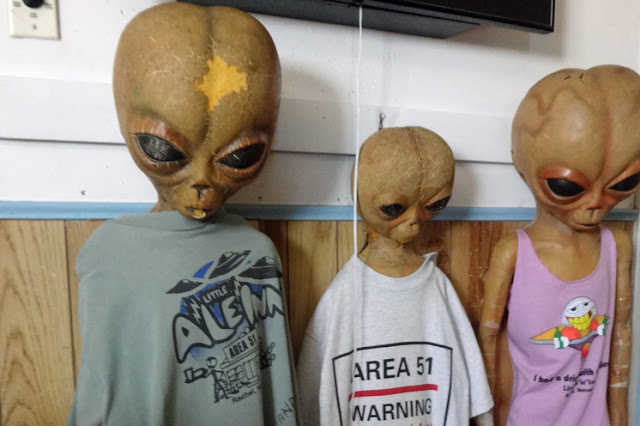 The ghostly alien right behind Bill. 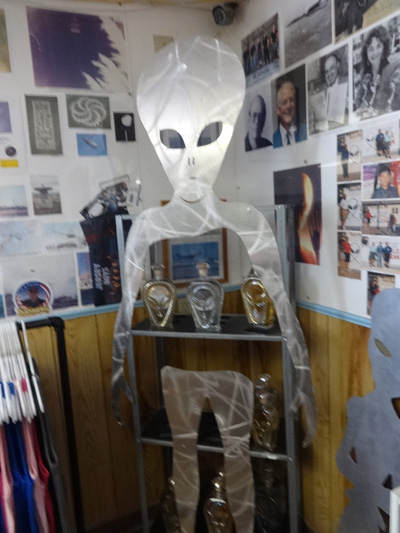 Just some of the decorations and things for sale in the restaurant. 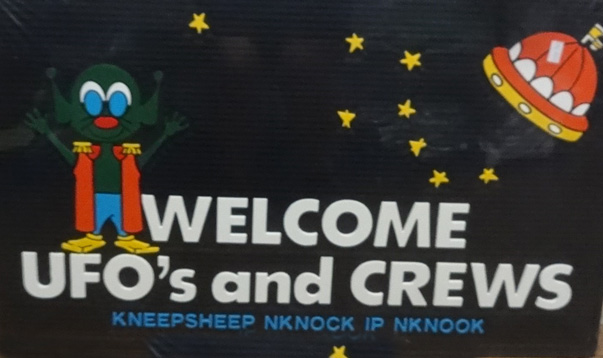 I remember reading something about the dollar bills on the ceiling, but don't remember what it was. Sure are lots of them. 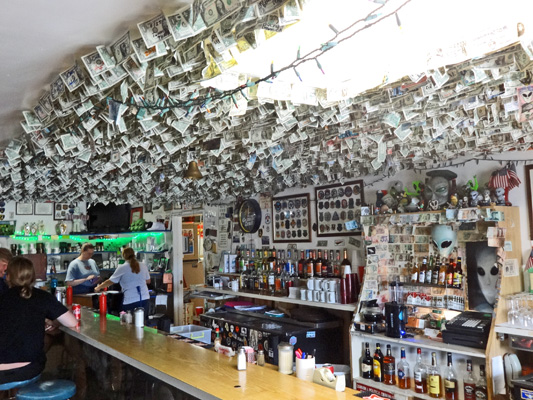 I love this quilt, it was for sale. 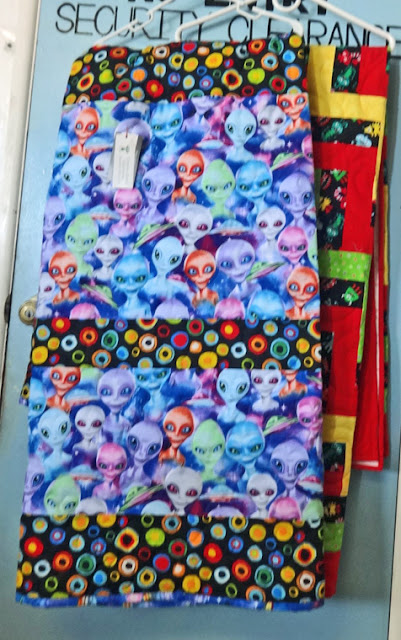 Small restaurant, it had a pool table but while we were there it was covered in clean sheets that were being folded for the motel rooms. 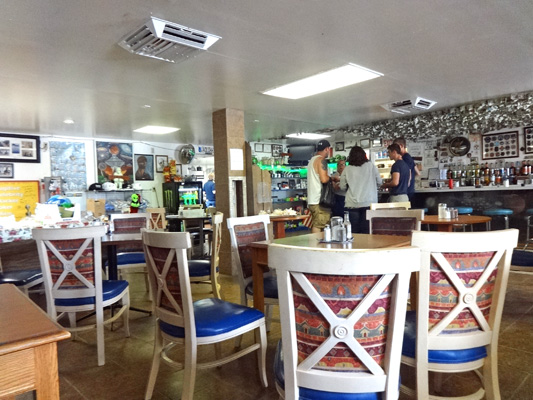 Didn't see anyone I knew. 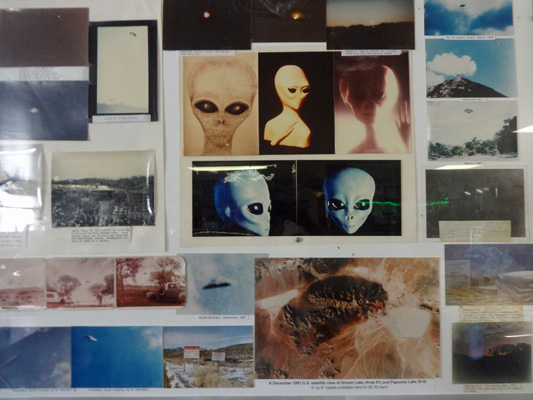 Oh Yes! The souvenir shop. You can bet I went there before we left. 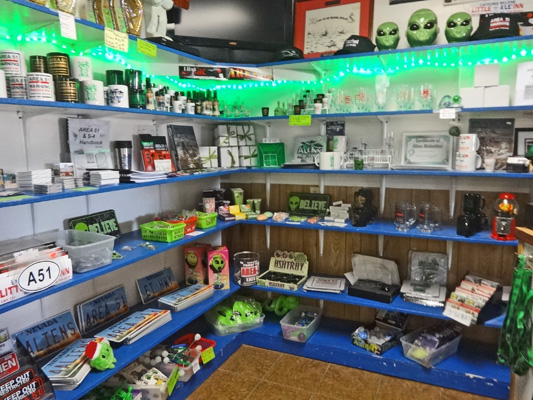 What every house needs. 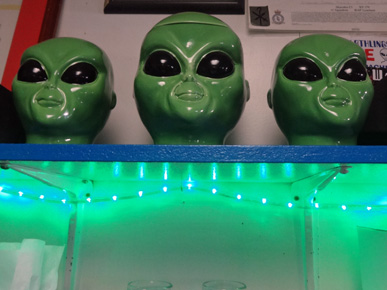 What I bought - actually I bought this t-shirt and a new mouse pad with the same design and a couple of pins for our collection. 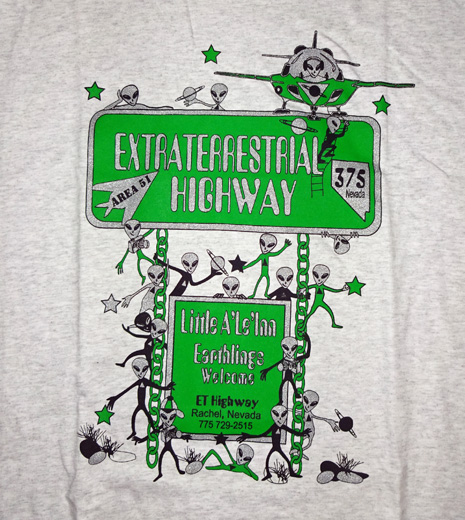 More pictures. A quote from a web page. to read the rest of the web page - it is very interesting click here.
"Rachel would be unknown to the world if it wasn't for the UFO claims. Since 1989, people from around the world have come to Highway 375 to look for lights in the sky they think are extraterrestrial. The visitors talk about "Area 51", the top secret military base 25 miles south of here, but the base has little real connection with Rachel aside from its proximity on the map. "You can't get there from here," the locals might say about the base, so it could just as well be a million miles away. Most residents have never seen any UFOs and are generally skeptical of the fantastic claims made by tourists. No more than 5 or 6 residents still work at the "Test Site"--meaning any of the restricted government areas to the south or west--and those who work at Area 51 won't discuss it. Most of the UFO and Area 51 talk is limited to the bar, which caters to the "UFO-tourists" and where no claim is too fantastic to be exchanged as truth. The rest of Rachel's population hardly ever thinks about UFOs except when asked by reporters." 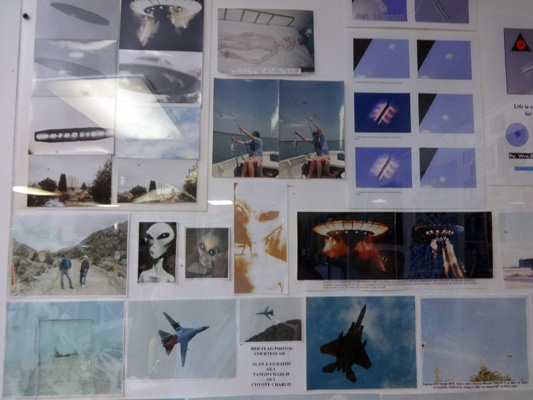 Interesting picture. I saw one of the last flights when they did a fly over of the San Fernando Valley in CA when the plane was on it way to a museum. 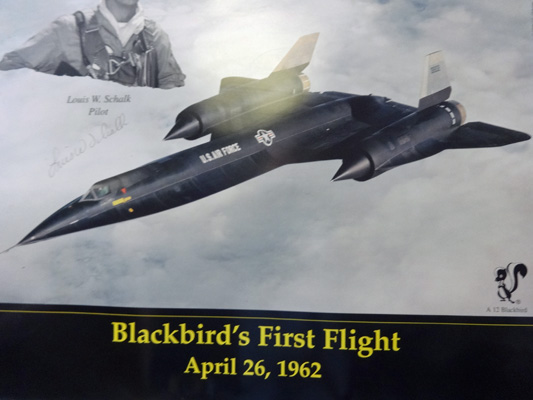 Where are my people? Are they coming back for me? 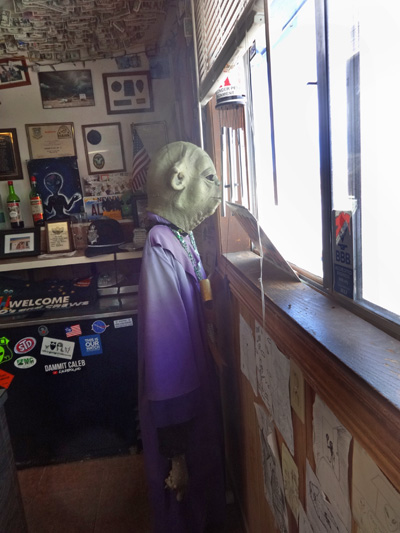 The wind continued to get stronger. Finally we pulled in the slides. The motion wasn't too bad, just felt like little earthquakes. But the NOISE. it sounded like we were in a bowling alley with all lanes being used. 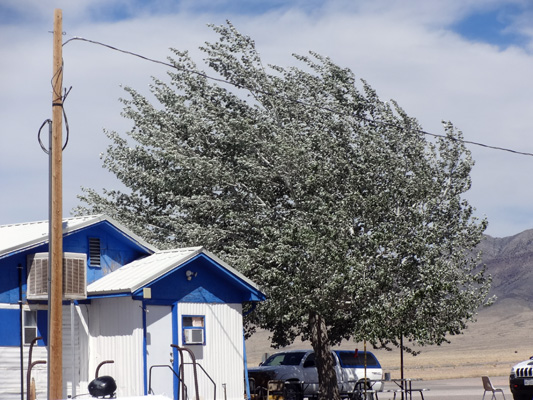 Rachel -the red X - is pretty close to the infamous Area 51 - at bottom of picture near Groom Lakes. Bill didn't even unpack his drone, knew it would not work. To read more about Area 51 click here. Again an interesting read. I think the circles are a crop of some kind. 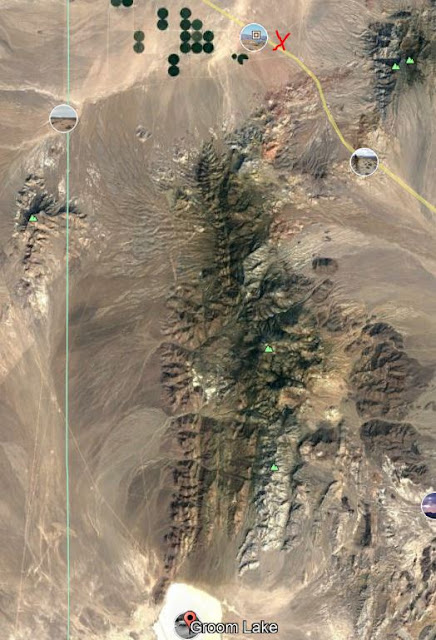 If you stay overnight at the Little A'Le'Inn in Rachel, or camp nearby, you get to see the most amazing night sky, far away from the light-pollution of the cities. However we didn't get to see much of the sky lots of cloud cover and dust in the air. Beside I could barely stand up in the wind.
Sometime during the night the front passed through and the wind let up some, thank goodness.
We left in the morning before the wind picked up again, were planning on stopping in Alamo, but just gassed up and continued on home.
Posted by Carol and Bill at 1:13 PM

Very interesting! I'd have to put a Loonie on the ceiling as Canada no longer has a paper one dollar bill.

don't the Loonies get heavy to carry - like our old silver dollars?