Blogger has been giving me this message every time I go to post - as always they are making changes to the blogging format. I had no idea what this meant.
Blogger no longer supports OpenIDExisting OpenID comments and your OpenID settings may have changed.

So I went to Learn More - here is what I learned - still don't understand it! Hope who ever wants to comment does understand it.
OpenID: Blogger previously allowed users to comment on blogs using an existing third party OpenID identity provider and has also acted as an OpenID identity provider when interacting with other systems on the Internet. Due to the low usage of this feature Blogger will no longer support OpenID as a provider or for making comments, and all comments that previously used OpenID will be anonymized. New comments can be posted either from a Google account  or labeled as "Anonymous" on blogs that allow it.

So there it is...Hope it helps.

Because the World Cup is still going - for many more weeks - we are pretty much watching it every morning. And by the time it is over it is well over 100 out - yesterday 111! Cooling down to 104 Sunday. So we only venture out if we HAVE to. So I'm just going to show a few things around the house. With July 4th coming up I hunted up my red, white and blue decorations. This window panel I embroidered and put together many years ago, but still like it. 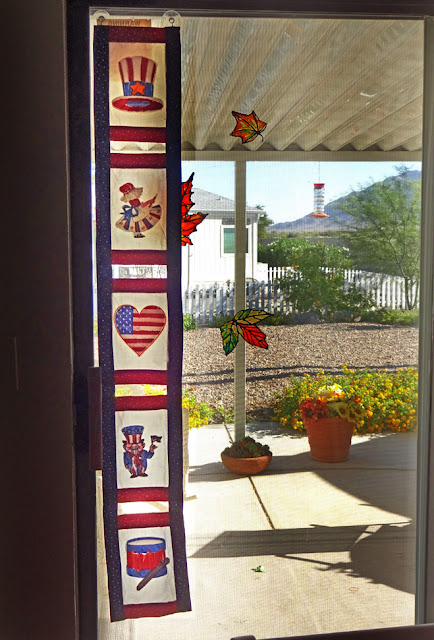 Also have stained glass for the occasion, in kitchen window. 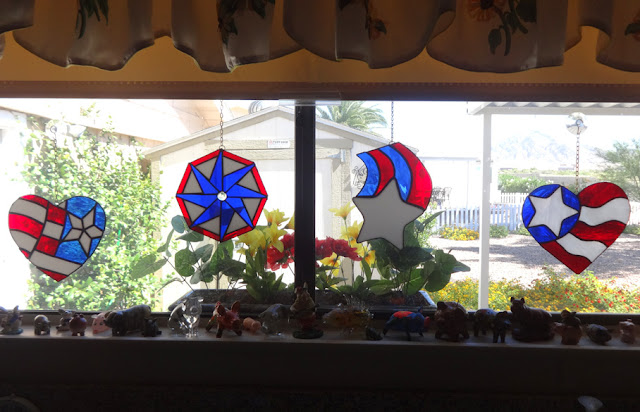 The place mats have the same designs embroidered on them as the window panel. Then the flowers and red and blue candles and a couple of little figurines. 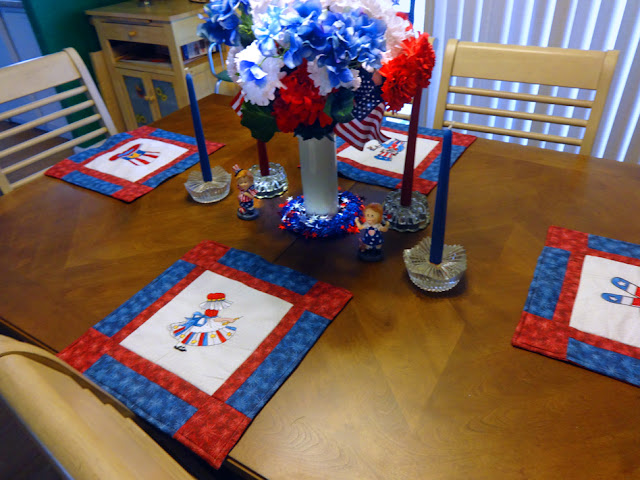 Fun to change things out with the seasons.
Even though we were only gone for a week the high heat and strong drying winds killed our potted plants. My parsley in the chicken and the herbs in front of the kitchen windows were completely dead and dried. So those pots now contain artificial flowers. The hen and rooster must be behaving cause have not seen any little chicks running around. 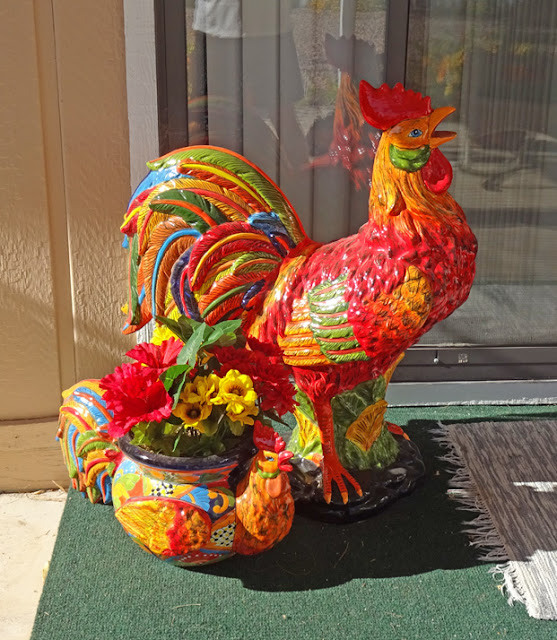 You can see the stained glass in the window behind these. 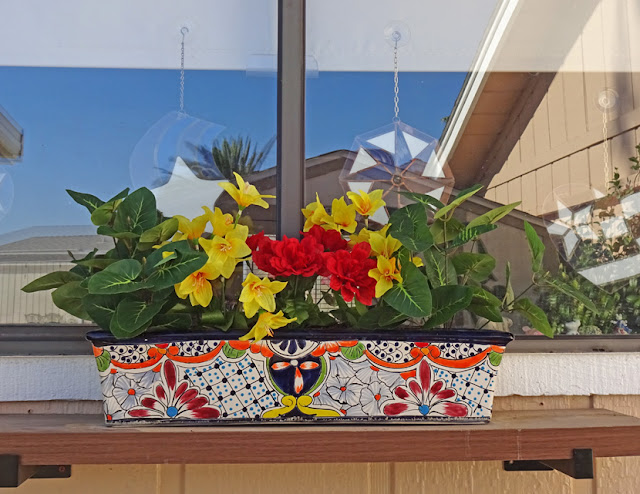 The geraniums might make it, but really don't think so. Will take care of them for a bit and see. 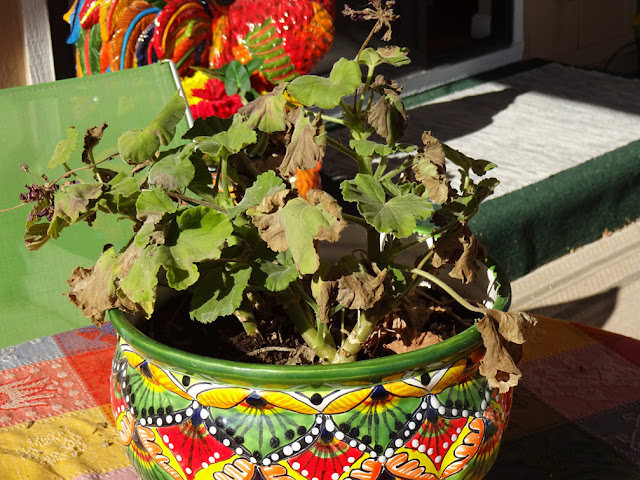 All of the plants in the ground have watering systems so they are flourishing.The lantana are getting huge with so many flowers. 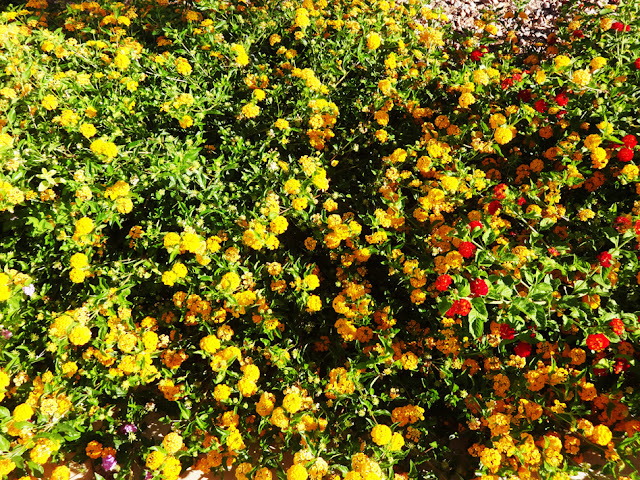 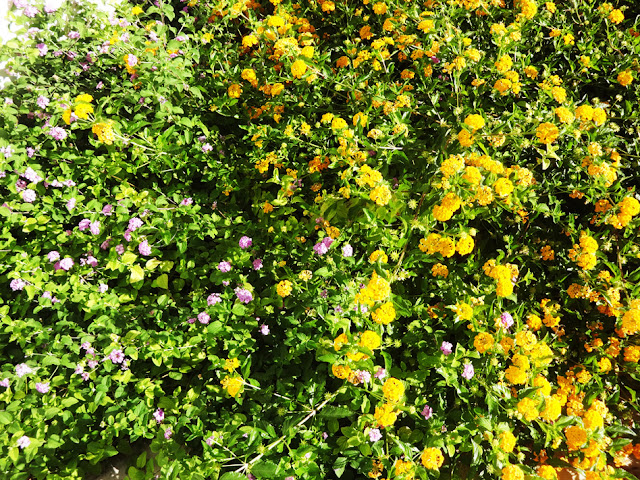 Got a good seedless watermelon and had to hunt for our "As seen on TV" melon cutter. Found it. Love it. Makes cutting up a melon easy work. It cuts right down to the rind in nice straight lines. Then just cross it and you get nice rectangles of melon. 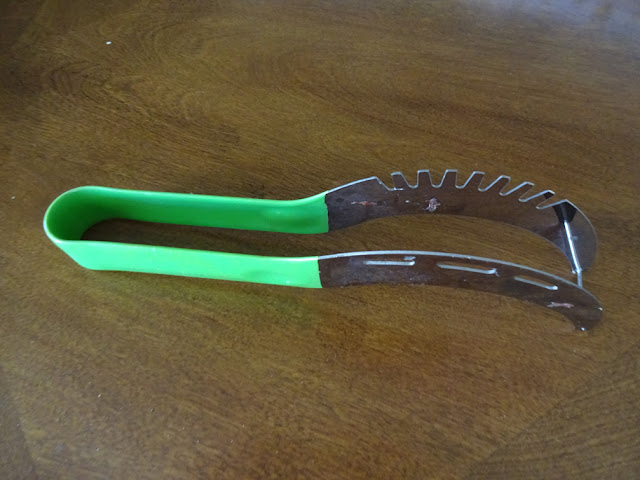 Checking out at WalMart the other day I spotted these, they are little personal fans and M & Ms - of course I had to buy them. They put out a pretty good breeze. Also using my Artic Air a lot. Both of us love it. It keeps me cool and he doesn't get near it so he doesn't get cold. 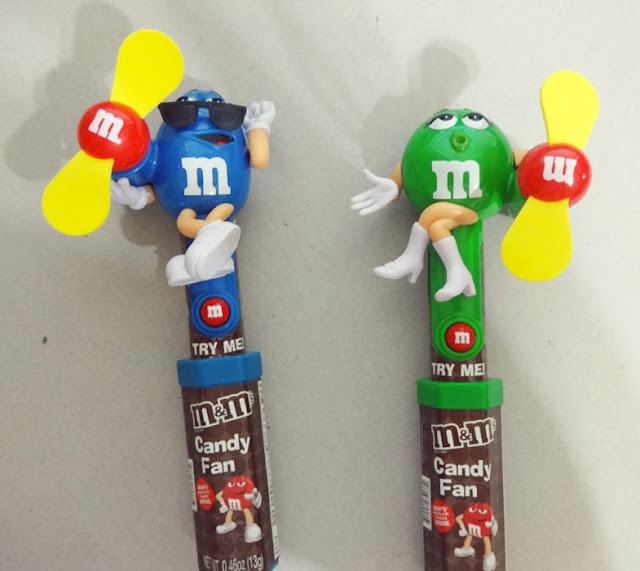 Happened to go outside yesterday afternoon  - it was only 104 out - and looked up at the palm tree. Never saw it do this before. 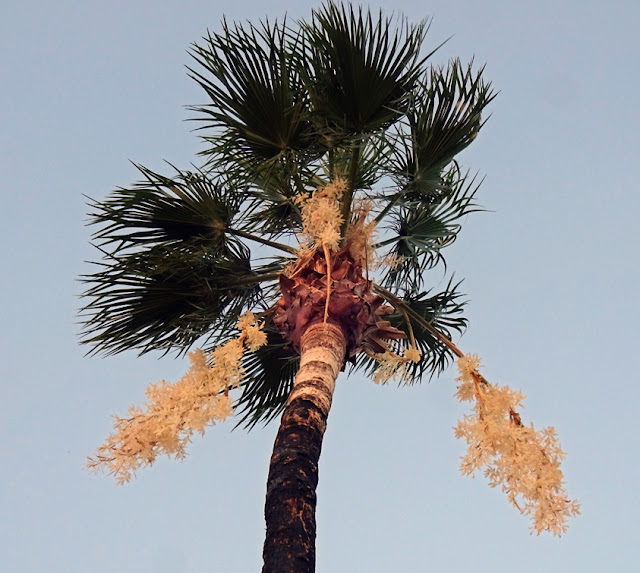 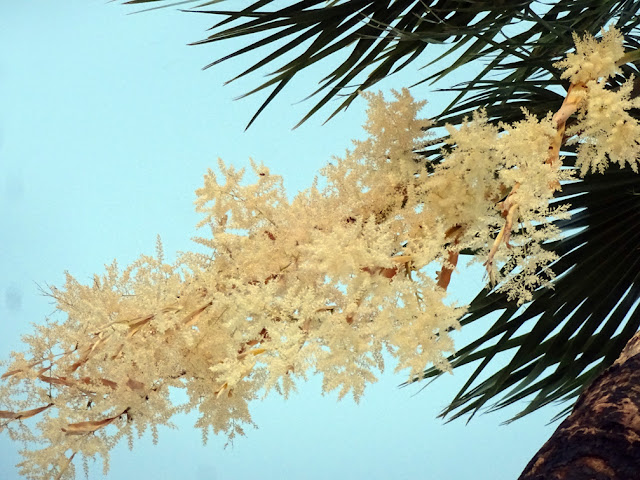 Been cooking a lot lately, just for something to do. Had beef stroganoff last night. Pretty darn good. Also have baked some bread the day before. Tonight is salad or left overs - going to be 109 today.
Spend most of the mornings watching world cup games. And wouldn't you know one of the most important games - for us - is tomorrow morning when I have a doctors appointment!
Like I said nothing exciting going on here.
Posted by Carol and Bill at 9:16 AM

I read about changes to blogger including what you posted and I think we can't understand because we're not 12 year old computer geeks! Plain English might help.

Thank you - I have NOT a clue.