More packages arrived from Amazon the other day. Here is Bill unpacking a big one. What is in it? JELLY- Smucker's Strawberry Jelly! Ten jars of it. Cannot find it here in any of the grocery stores so he found it on Amazon and ordered it for me. Gotta love the man and Amazon.  Each jar was packed inside a big bubble. 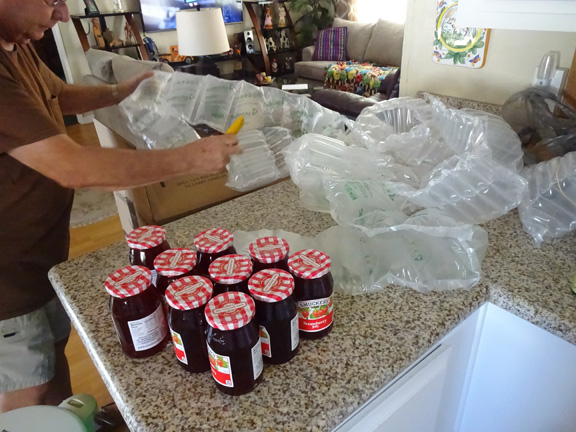 He also got me a kitchen clock. While gone the clock on the microwave lost it's light. It still works but you can't see it. This is a little blurry but it is very pretty. Big sunflower on it. 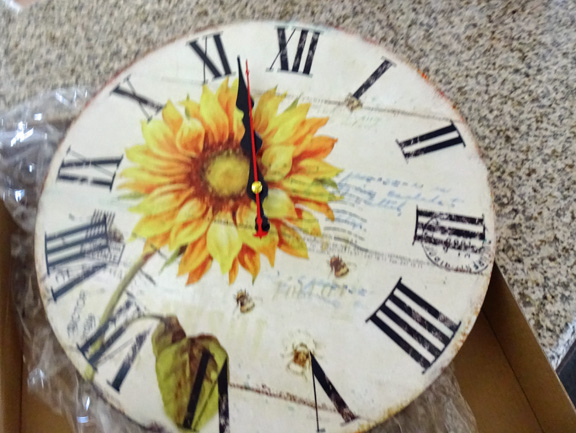 Here it is hanging above the sunflower curtains and next to the flying pigs! Have to tell on myself. I had a problem figuring out how to hang it. I kept wanting to put the one o'clock straight up - couldn't figure out why the hole on the back was in the wrong place. Guess it's been a while since I've looked at a REAL clock. Then I had to look at my watch - yes it is a real face clock - to figure out which was the hour hand and which was the minute hand. Getting way too used to digital. 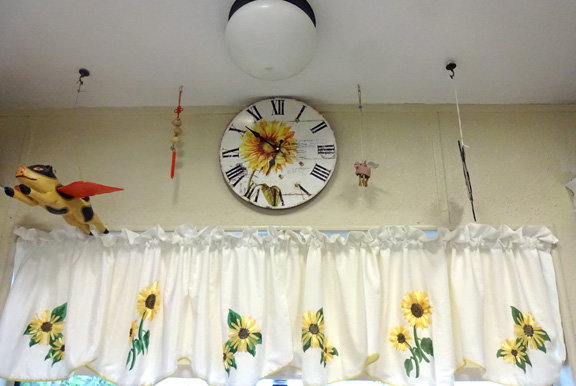 Yesterdays sunrise, this morning it was very overcast, no color. And later today the winds are supposed to pick up 20/25 sustained with gusts up to 50! 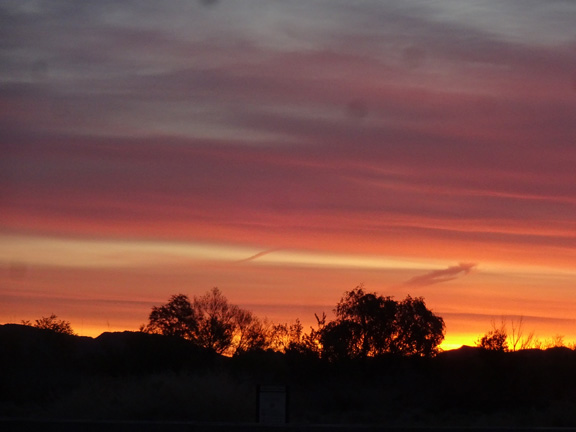 Yesterday we took our laptops into the Geek Squad, Bills was having a problem with the speakers not working. Well they worked fine there! Maybe all the bumping on the roads on the way home fixed them?!
Mine on the other hand is being kept there to be worked on. Ever since it stopped and I had to do a weird restore on it in Mazatlan it has been running really slow. So hopefully they can get it fixed - sure don't want to get a new one. I should get it back Thursday. Hopefully all my programs are still there. Also I took an old laptop that we had in the closet and set it up to work with the Dish TV and that is all we will use it for. That frees up our computers and still we can watch TV. Only need to use it if we want our local channels or if we are in Mexico.
Also stopped at Bed, Bath and Beyond where Bill bought a bed tray???
Well here he is working on it. Look closely to find it. What is it for you ask? Well, it is a charging station for the drones. 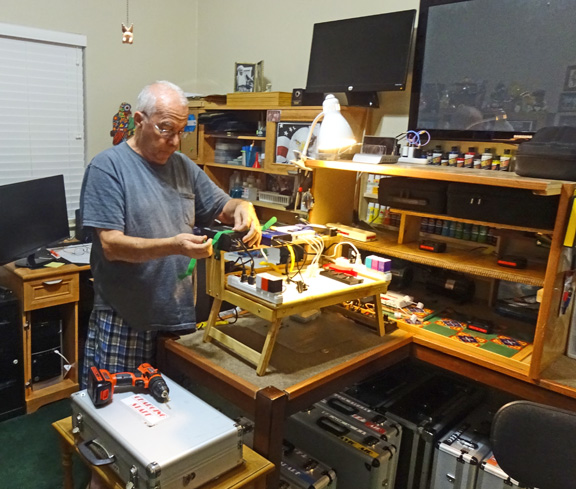 It is for the RV so he doesn't have to take anything from the house. He already had all the stuff but this past year it was scattered all over the RV, now it will be in one place and easy to transport. 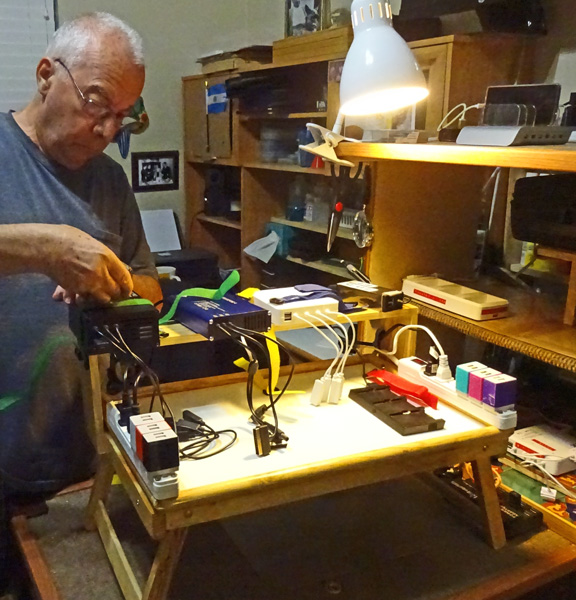 Also went over to the RV place and made an appointment for  the end of the week to take RV in to get the hole in the fresh water tank fixed.
I think that we have everything taken care of and it seems like every day there is more to do.
Posted by Carol and Bill at 2:56 PM

I know the feeling, every time I think I've caught up there's something more on my to do list.

And yesterday we had to make a surprise trip to doctor for me.

How sweet of Bill to order you the jam. And the clock looks perfect there.


I'm here to testify about Mr John Blank ATM Cards which can withdraw money from any ATM machines around the world.. firstly I thought it was scam until I saw so many testimony about how Mr John sent them the ATM blank card and how it was used to withdraw money in any ATM machine and become rich so I decided to risk the opportunity I contacted him also and I applied for the Blank Card to my greatest surprise I have used it to get 10,000 dollars. maximum withdrawal daily $1,000, Mr John is giving out the card just to help the poor. Hack and take money directly from any ATM Machine Vault,If your interested kindly contact him directly on his email (johnlopez1945@gmail.com)

Cool way to have financial freedom!!! Are you tired of living a poor life, here is the opportunity you have been waiting for. Get the new ATM BLANK CARD that can hack any ATM MACHINE and withdraw money from any account. You do not require anybody’s account number before you can use it. Although you and I knows that its illegal,there is no risk using it. It has SPECIAL FEATURES, that makes the machine unable to detect this very card,and its transaction can’t be traced .You can use it anywhere in the world. With this card,you can withdraw nothing less than $4,500 a day. So to get the card,reach the hackers via email address : besthackersworld58@gmail.com or whatsapp him on +1(323)-723-2568