Sunday was a beautiful day. No too hot and no wind so - much to Bill's surprise - suggested a drive in the desert. He was surprised because Sunday is a NASCAR race day and I always want to watch the race. But I have finally joined the 21st century and learned how to record
things. So I set the DVR and off we went. Even remembered to bring the GPS and the water bottles [thanks Mark.] A 42 mile trip out into the desert, mountains and river. 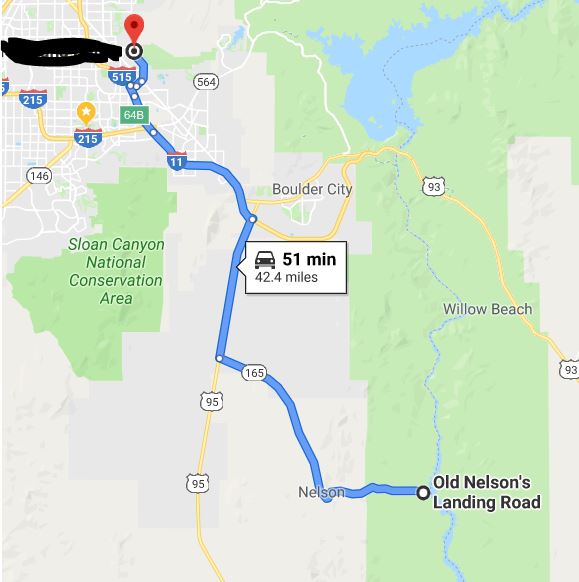 The area that looks like a lake at the foot of the mountains in the middle right is actually lots and lots of solar panels. 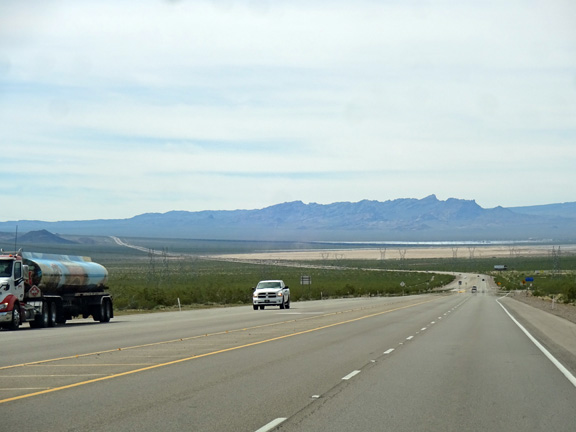 I was surprised how green the foot hills were. 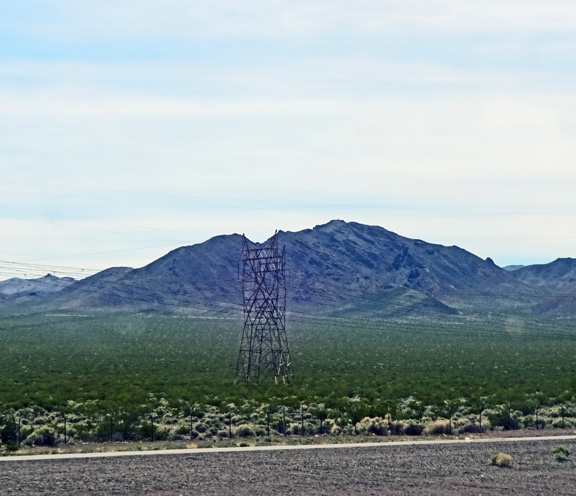 Off the main highway on to highway 165. Just scenery. 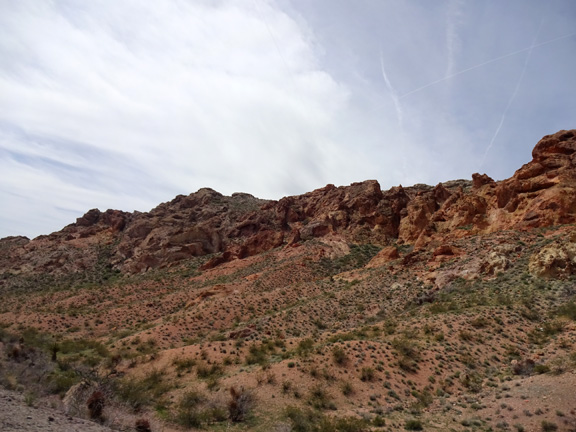 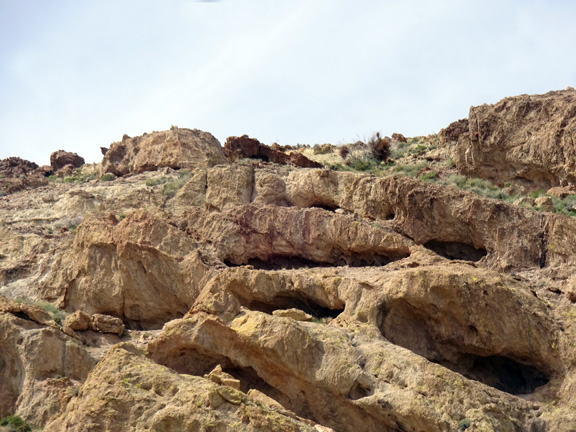 Over another hill and we could see Nelson. It is what my girlfriend in high school, Sharon, used to call a "poke and plum town." She explained it as "by the time you get your head poked out the window the town is plum gone." 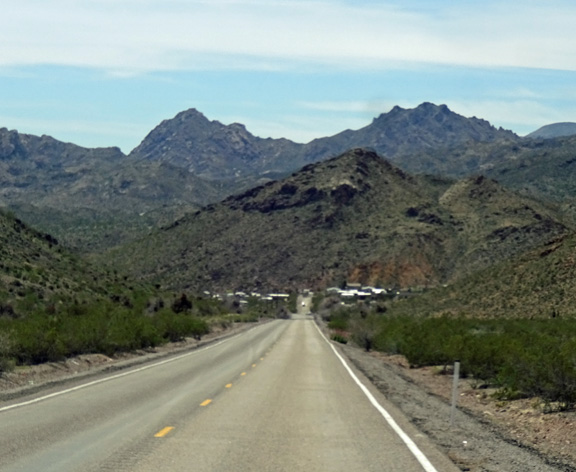 This whole area was involved in mining in the past. An old shaft and trailings up on the hill. 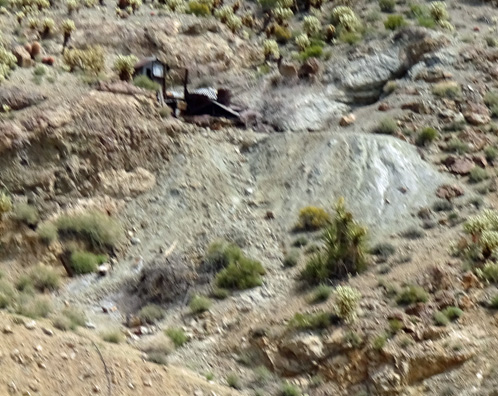 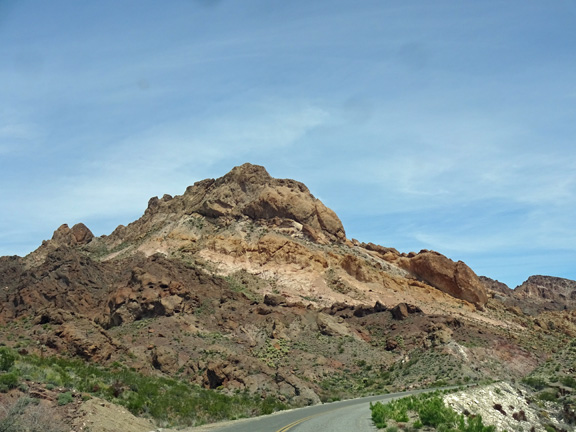 Lots and lots of these mean looking cacti. They sure looked happy and healthy. 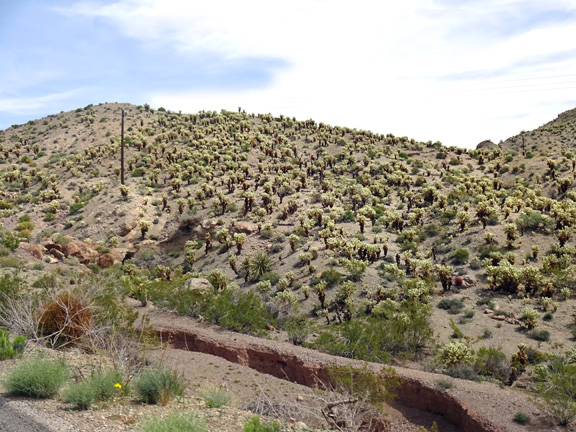 Wow! What a view. 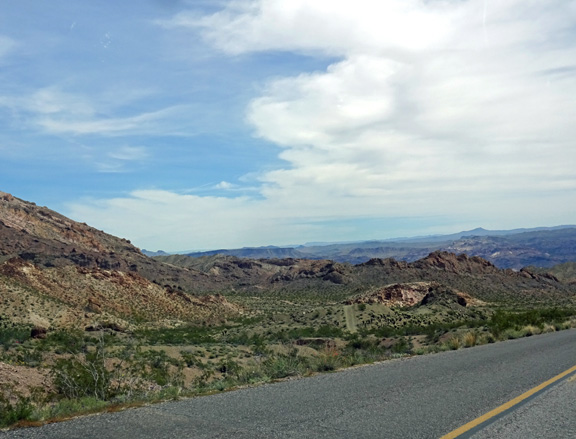 Over another hill and we saw buildings. Old looking buildings and a big mining operation. But we just continued driving to our first destination. 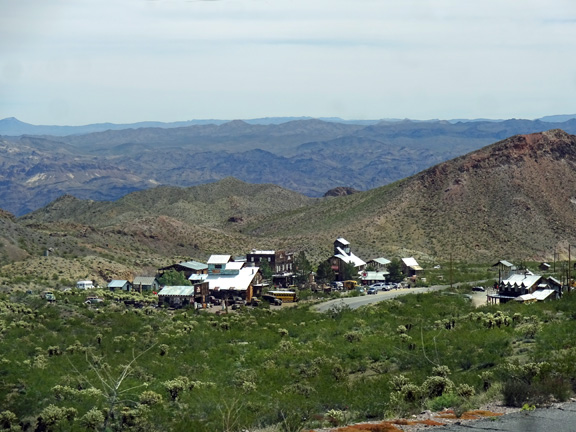 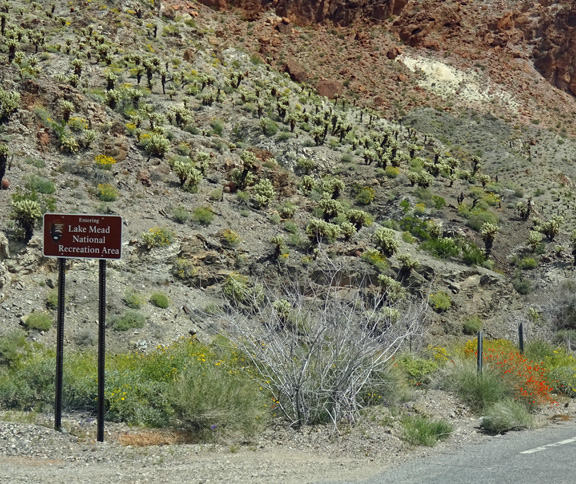 Some orange flowers mixed in with all the yellow daisy type flowers. 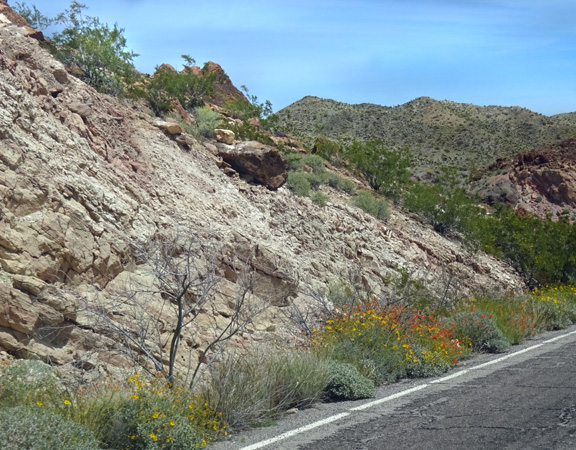 Beautiful views which ever way we looked. 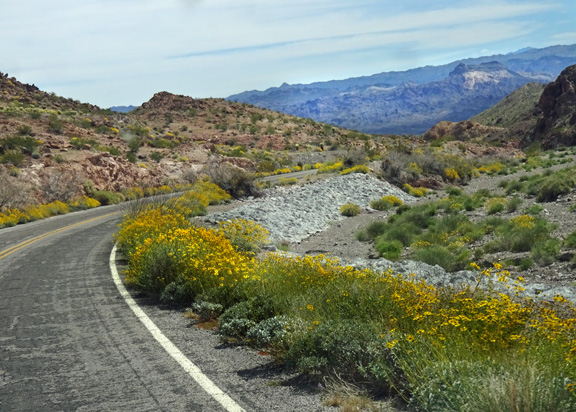 Down hill and around the corner. 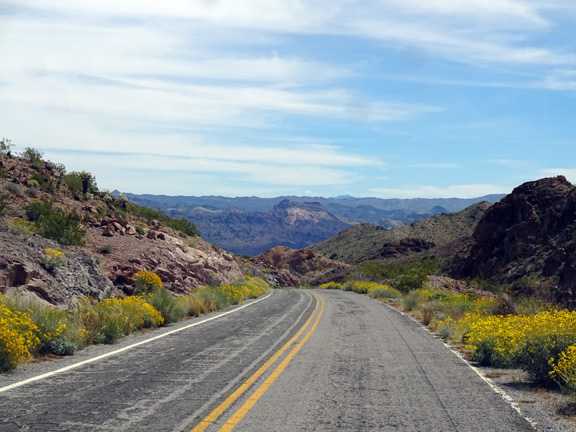 Our first sight of the Colorado River. 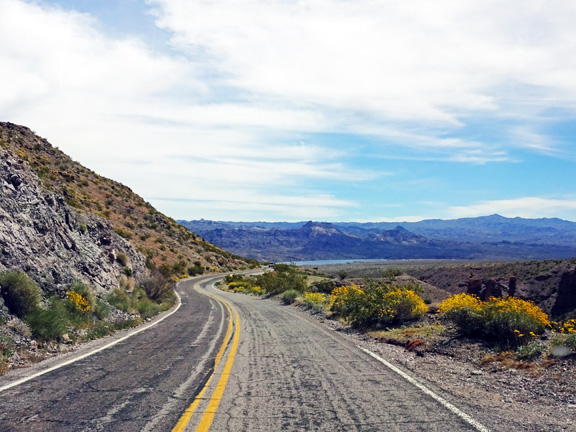 We came around the corner and discovered some Hoodoos!  A hoodoo (also called a tent rock, fairy chimney or earth pyramid) is a tall, thin spire of rock that protrudes from the bottom of an arid drainage basin or badland. Hoodoos typically consist of relatively soft rock topped by harder, less easily eroded stone that protects each column from the elements. 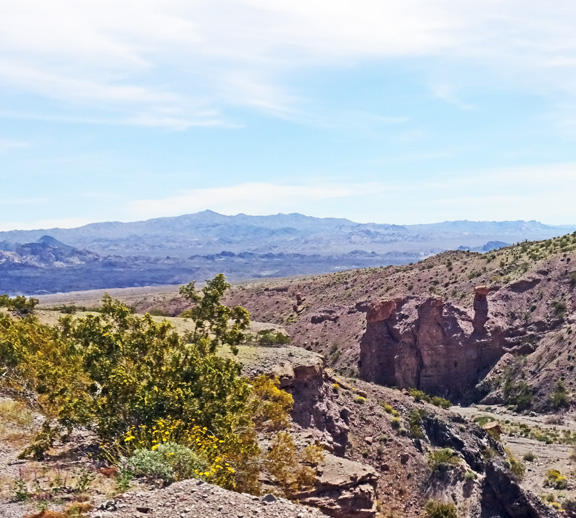 Just pictures of some of the hoodoos. 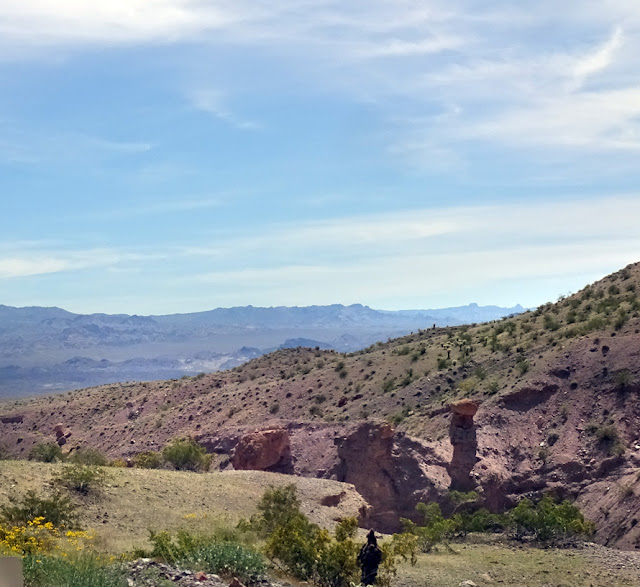 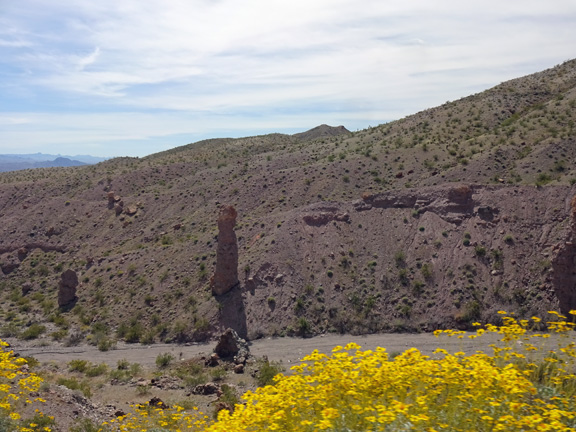 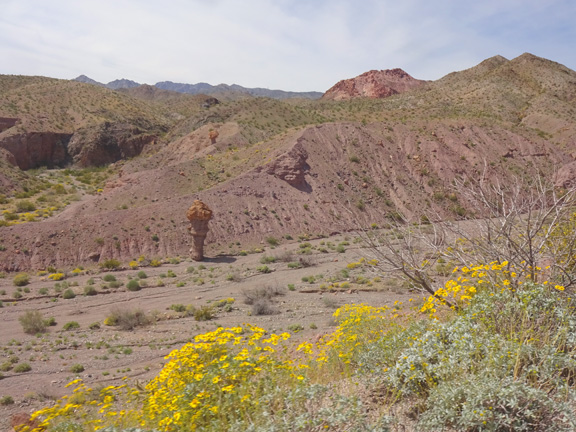 More of the river and scenery 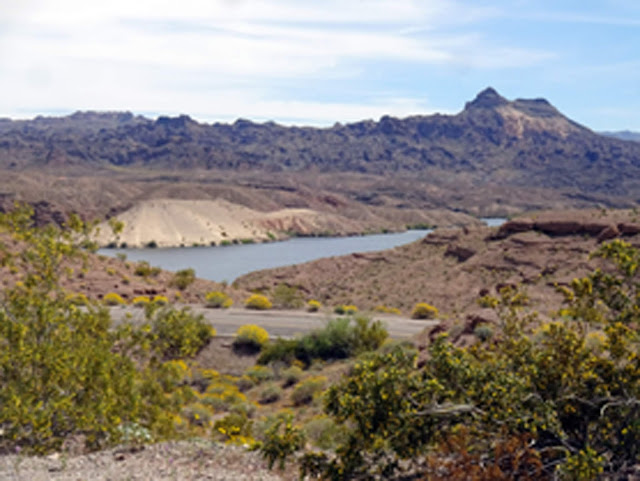 The final part of the road leading to the bank of the river. 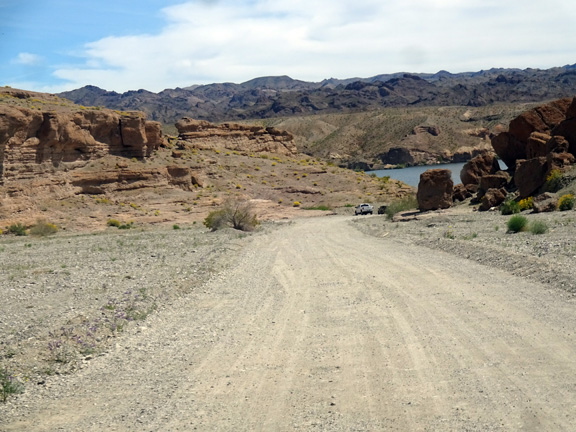 Nelson's Landing, washed into Lake Mohave after a strong downpour in the regional mountains sent the runoff down the channels and produced a flash flood. There are five wide channels that run from the local mountains toward the river, all of which converge into a small outlet where Nelson's Landing was. The entire landing and village was destroyed and nine people died when the flood came through the wash. The wall of water and debris was reported as about 40 feet (12 m) high as it reached the river. 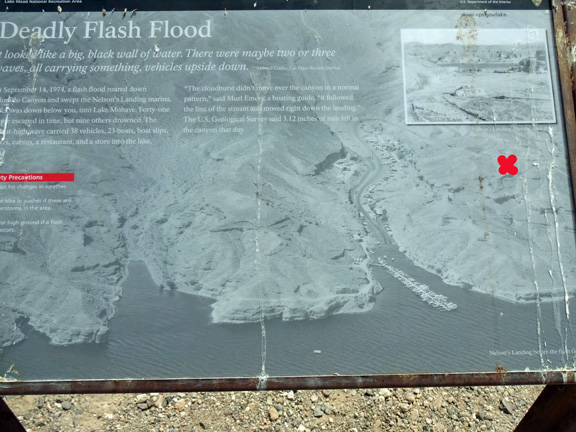 To view full screen click here.
The marina used to be right down here. 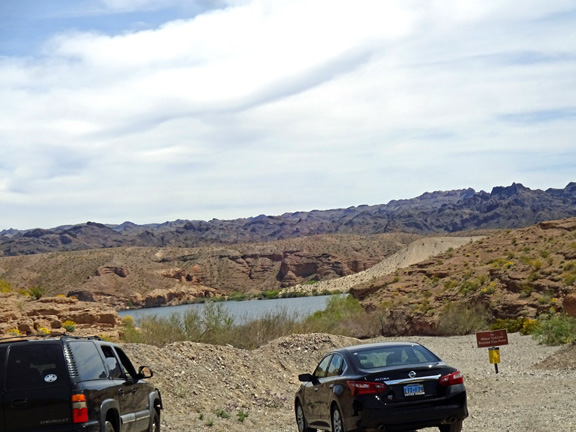 People climbing and hiking the rocks. 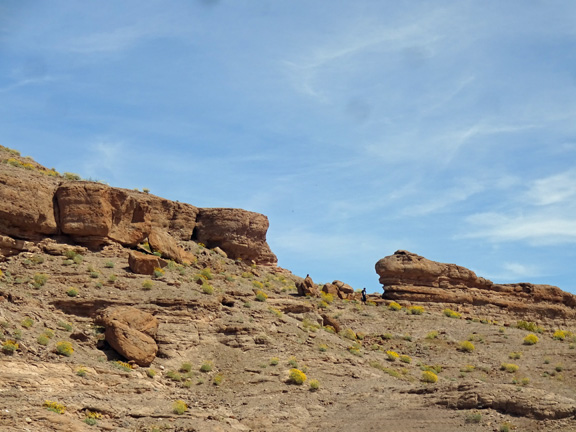 Part of the canyon walls. 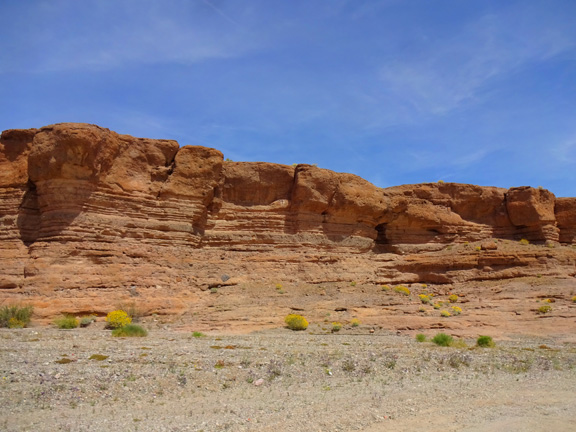 Heading back up the hill 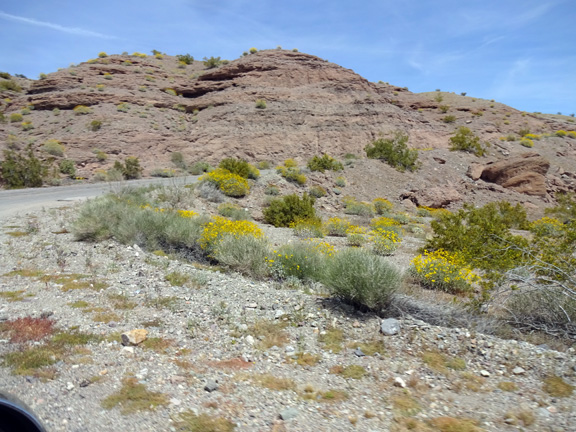 More about our field trip tomorrow. Have somethings that have to be done now.

1974 was the same flood that destroyed a huge campground, the fishery, ranger station and homes, and marina at Willow Beach. Several people killed as well. That is why everything in Willow Beach is newly built. Orange flowers are desert globe mallow. Yellow ones are probably brittle bush or desert marigold. Brittle bush flowers have fewer petals and center is a little darker.

While we were down by the water I was wondering where willow beach, I figured not too far across the water. Thanks for the flower names, they sure are pretty this year.
Glad we went there on Sunday today sustained winds of 25/35 with gusts of 50/65!

The desert is so beautiful in the spring!

I'm glad that you are using the water bottles.