We haven't been doing much lately so I've been going through some old photos. Came across these from 2003 when we were in North Dakota. I whined enough that Bill gave in and took me for a drive along The Enchanted Highway. It was awesome.
Here is an article from USA Today about the highway and the man who imagined it. The pictures are mine. If you go online you can find a lot of information about it and more pictures of the sculptures. They are HUGE.

Standing in the shadow of a 40-foot-tall metal grasshopper on North Dakota's grasslands, it's inevitable: Travelers suddenly cower, strap on a look of terror and strike their best B-movie pose. 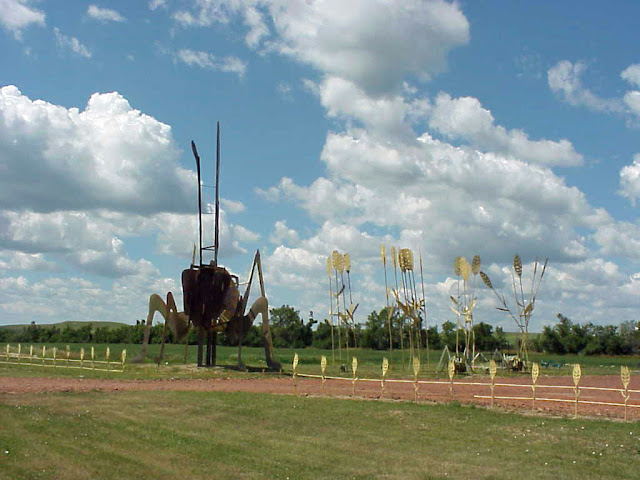 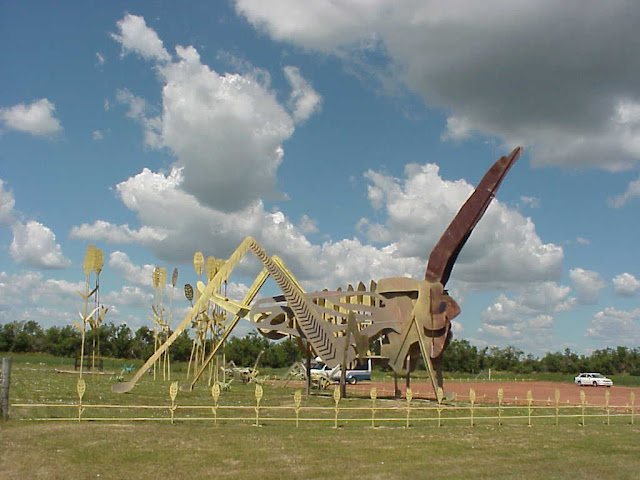 Cameras click, families giggle and then it's off to the next super-sized scrap-metal sculpture along this 32-mile stretch of highway in southwestern North Dakota. The two-lane road doesn't have a name or number, but it's nickname aims to entice: Enchanted Highway.
The sculptures along the highway add a welcome dose of whimsy to the wide-open horizon. Most of them also offer a free slice of Great Plains history and culture. Those grasshoppers symbolize the plague that devastated wheat crops and pioneer homesteads in the mid-1800s.
Fast-forward a century and a half, and farming remains challenging and populations sparse in this section of the state.
"I saw the town was a dying community," says sculptor Gary Greff, who grew up in Regent, N.D., population about 200, and returned in 1989 after working as a teacher and principal.
The self-taught artist decided to draw attention to his hometown by building the "World's Largest Tin Family" out of scavenged scrap metal, old oil drums and pipes. Colorful and folksy, they've waved to travelers since 1993.
Notice the size of our Jeep compared to the sculptures. 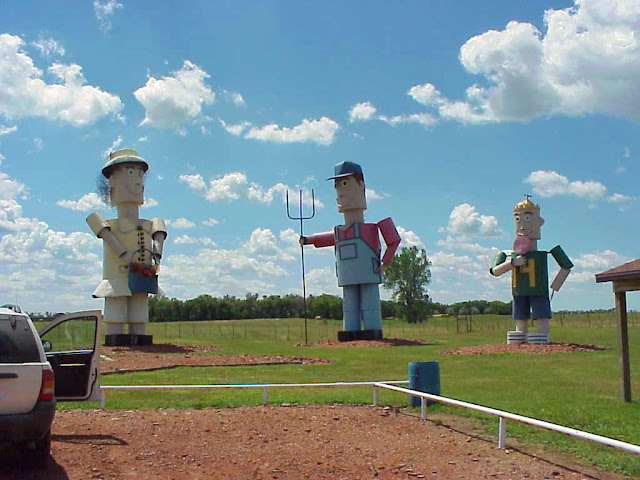 I thought I had pictures of the father too, but can't find them. 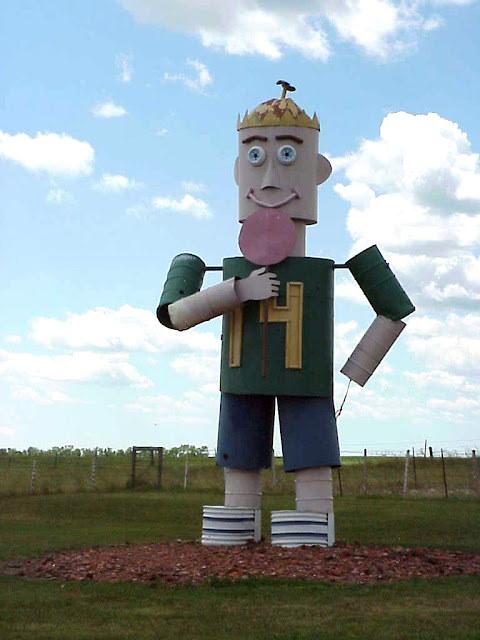 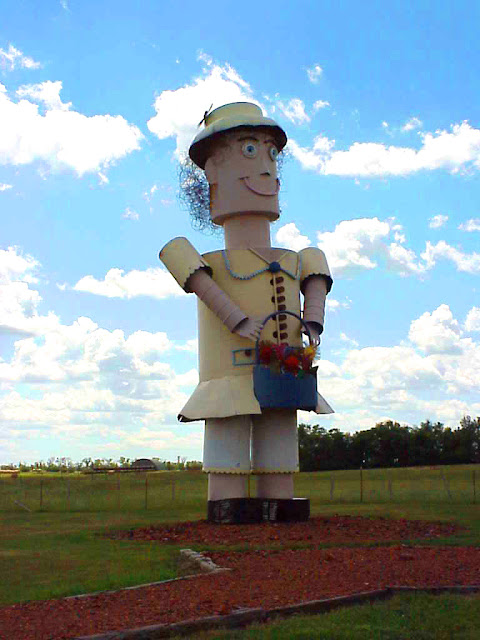 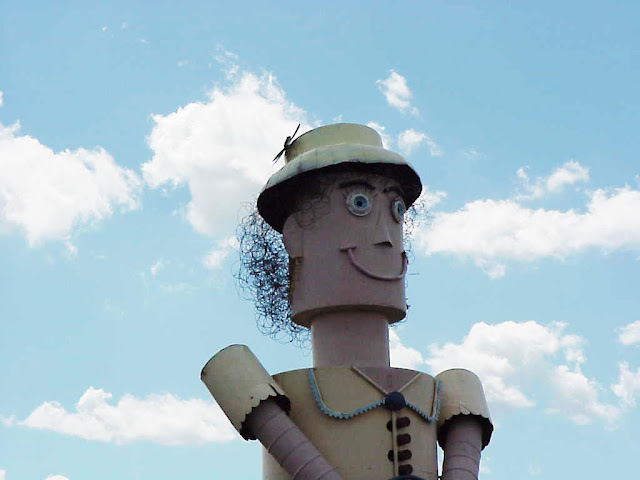 Increasingly complicated sculptures followed about every five years, including Teddy Roosevelt on a bucking bronco and giant pheasants, the state's famously abundant bird. Greff soon realized he needed to go even bigger to coax travelers from nearby Interstate 94 onto the quiet highway.
What became the world's largest scrap-metal sculpture (earning a spot in the Guinness Book of World Records) "Geese in Flight," towers 110 feet above the exit, about 40 miles east of a section of Theodore Roosevelt National Park. Weighing 78 tons, it makes a minivan feel like a mini Cooper. 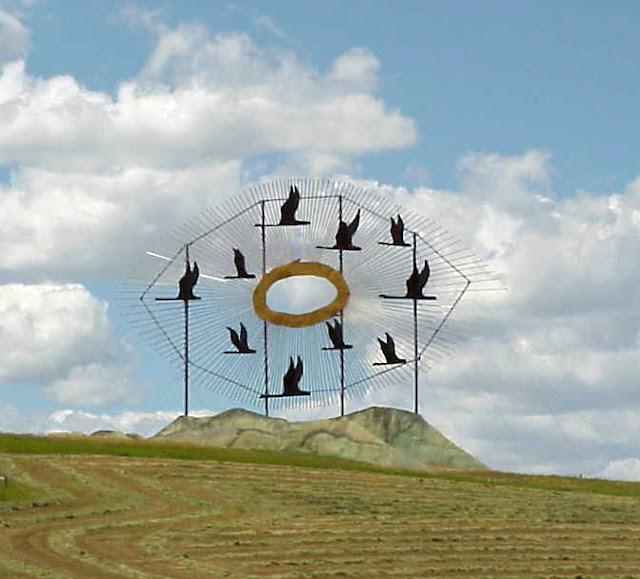 It's hard to get people to steer up to North Dakota, but he's really made it into a destination," says Doug Kirby, publisher of Roadside America, which catalogs 9,000 roadside attractions on its app and website. "I haven't seen anyone else do anything on that kind of scale without a budget."
Greff lives frugally, something pioneer ancestors would appreciate. He hit another goal last summer when he opened The Enchanted Castle, a 19-room inn built in a renovated former elementary school. The inn in Regent gives road-trippers a place to rest.
"Twenty-two years later, I'm still at it," says Greff of the quirky art project that spun into a lifelong endeavor. "I just made up my mind I was going to do it."
Additional pictures I took. 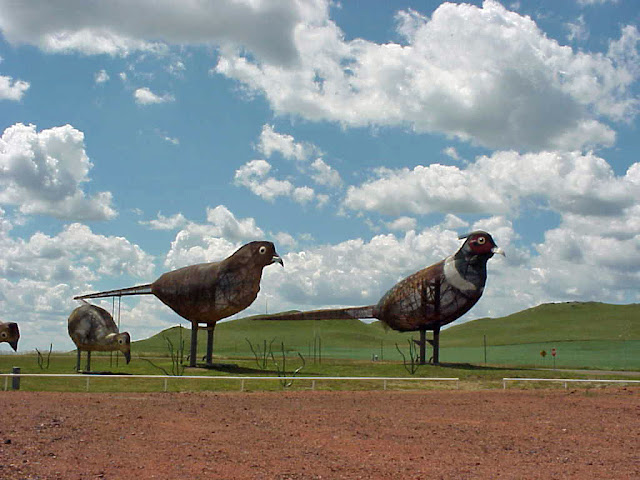 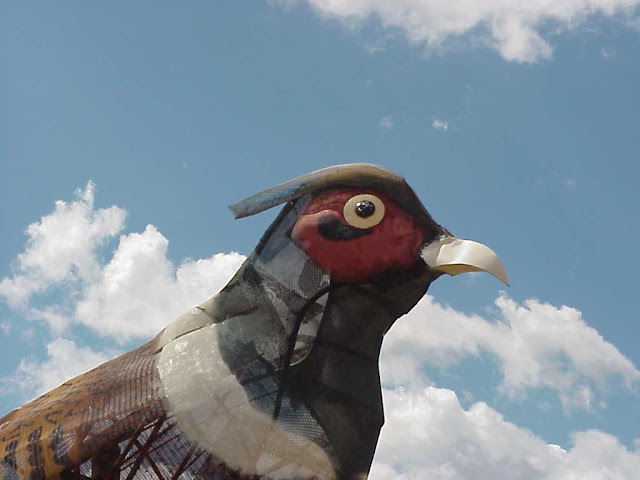 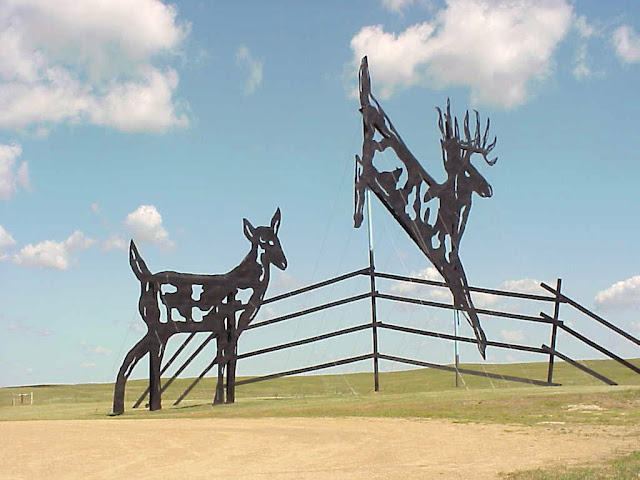 I understand there are more sculptures now. Well worth driving through the peaceful farmlands to experience this.
Hope you enjoyed this.

It is fun to see if you are ever up that way. Surprising how BIG they are.