As seen on TV

This will be kind of a rambling post. Mostly about the weather and weekend.On Sunday I made French Toast sticks in the air fryer. They turned out okay, but learned a few lessons. First cut off the side crusts, they get to chewy when cooked. Let the bread soak in the egg/milk mixture longer so the whole piece is saturated and use less cinnamon. Also don't cook them so long. Otherwise... 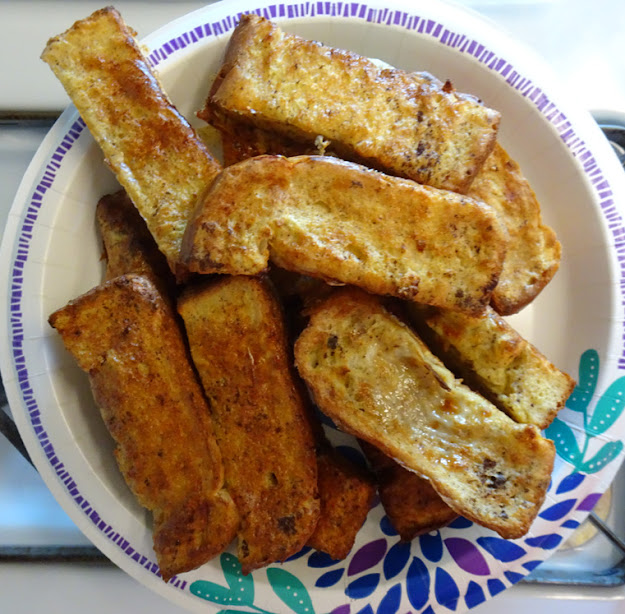 This has been how our weather was all weekend. Very warm 114 - and lots and lots of smoke in the air. It seemed like twilight all day long yesterday. Can barely see the mountain back there and by late afternoon couldn't see it at all. All smoke from California fires. 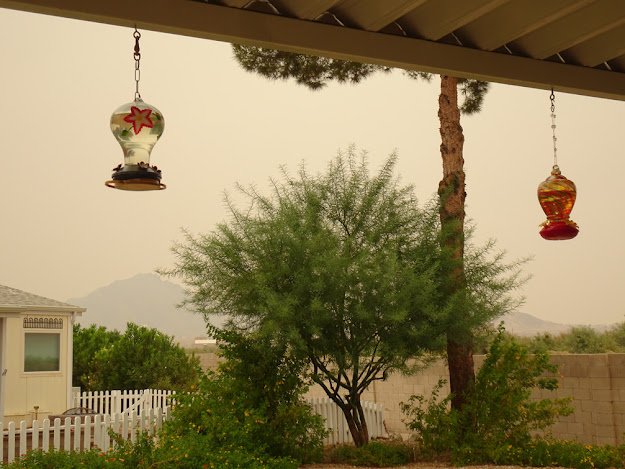 Not a breath of breeze all day. It looked yellow outside. 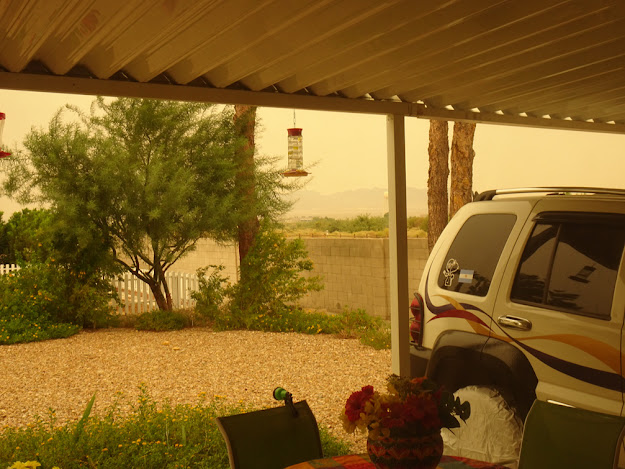 From the TV. All the people returning to California on Monday afternoon. This was 19 miles from the CA border. About 5 miles an hour! 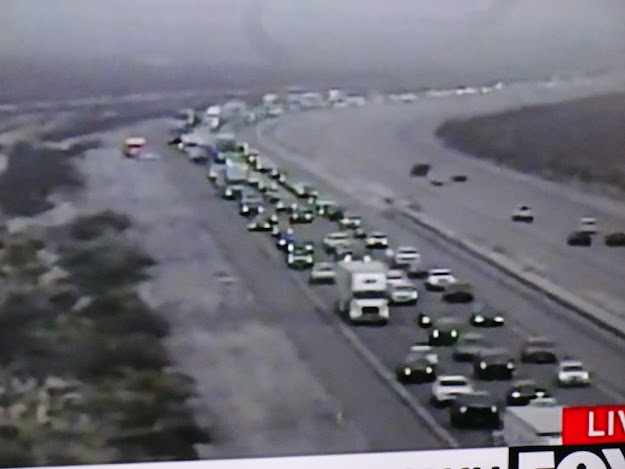 Then I got away from the TV and went outside to check the sun. Photo is not retouched at all. It was 5:00 in the afternoon. 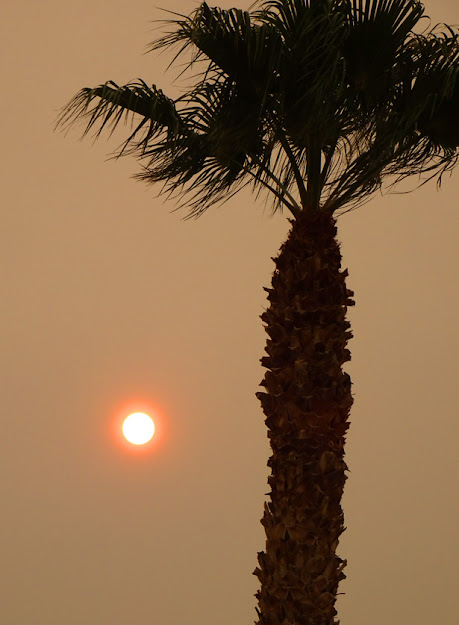 Back in to watch TV. Notice the drastic change in temperatures for today and tomorrow. Yesterday it was 107 high with no breeze. Today we have low 80's and winds - more on them later. 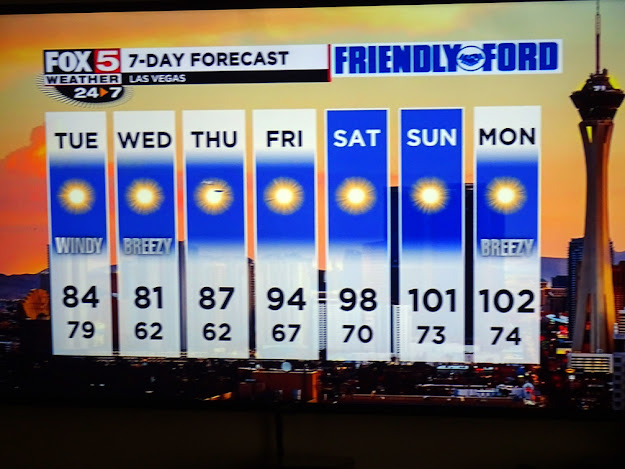 Tomorrow I have a doctors appointment and they won't let you inside until your name is called, at least it will be cool to wait outside.
Back outside at 5:30. The whole sun was the color of the ring around it. Bright red. Best picture I could get. 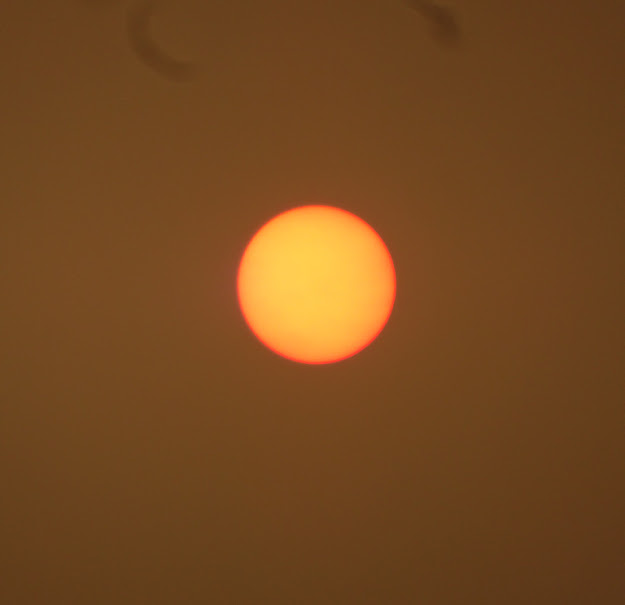 More from TV See the big fire plum of smoke. The satellite view showed the smoke rising and rolling. 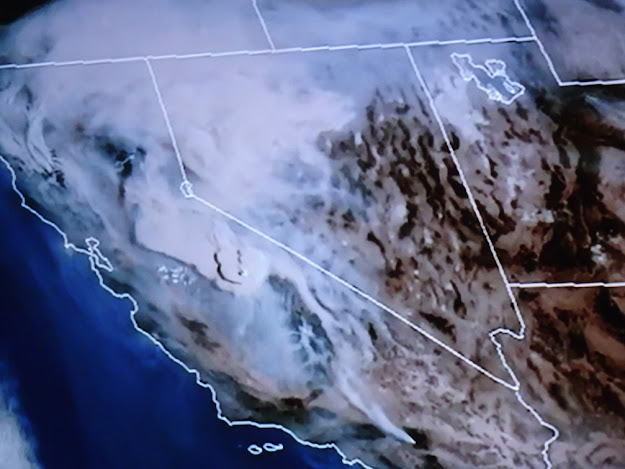 Back outside again at 6:50 looks like no sunset, just ash in air. 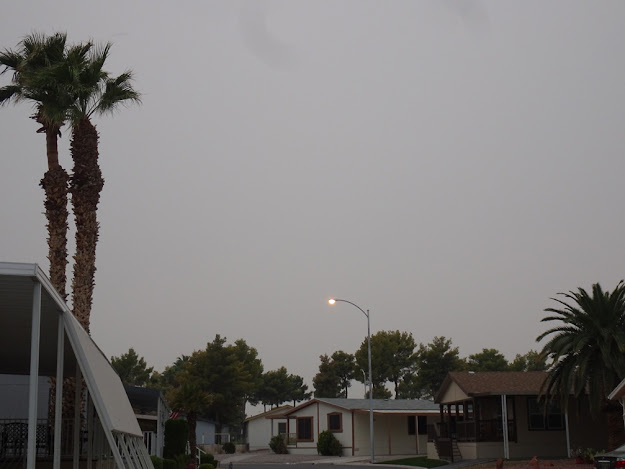 But then back outside at 7:20 - the whole sky was red- like the reflection of flames. 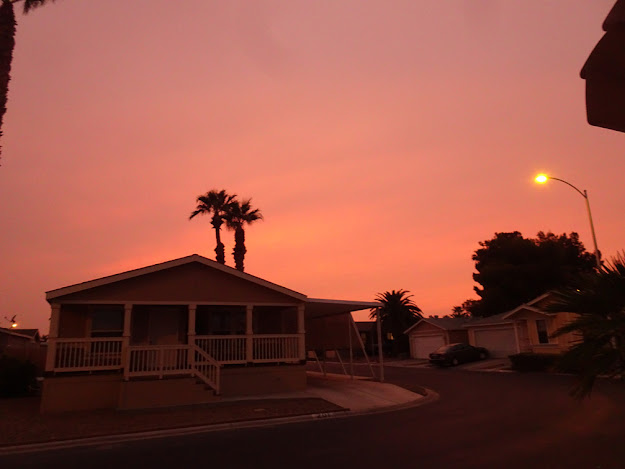 And off of the weather but back to the TV. See the checkerboard. The city is painting these at crosswalks around schools, so the kids know where to cross and parents know where not to park!. Of course no kids are in school. And shouldn't they know where the crosswalk is anyway. 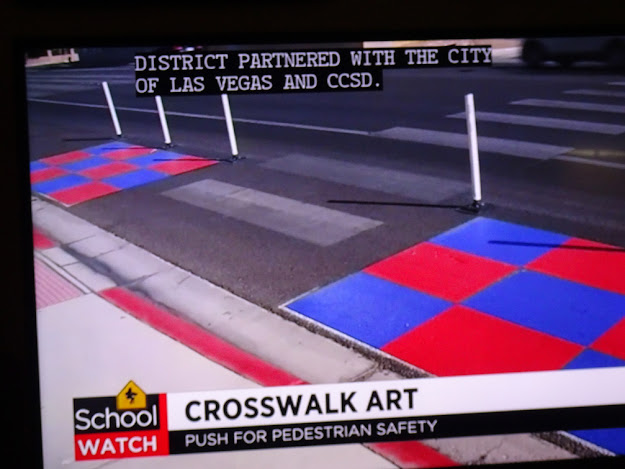 So got up this morning anticipating a walk as the weather has cooled way down. Looked outside - instead of smoke we now have the air filled with dust. Sustained winds of 30+ - gusts to over 50. Already two areas of town are without power because of trees knocking down power lines and poles.
But it is cooler. Turn sound on. It got worse after I filmed this!
We had planned on getting out a little today and doing something, but changed our minds. The dust is terrible. We did get out and went to the grocery store thinking we'd find a couple of things Walmart doesn't have. We didn't - it was a Smith's and their shelves were 1/3rd empty. Couldn't even find Graham Crackers or frozen pie crusts...
Boy our awnings are - wooden slats - are acting like they want to take flight. Lots of thumping and banging.

I trust the children to know and remember where to cross more than I trust the parents not to park in a crosswalk..... :-)

Christine - By the time they let the kids go back to school the paint will be worn off.