Have had some interesting times since I last wrote. Bill has taken the Jeep out of the back yard. Washed the poor thing and put air in its tires. Think he is anxious to get on the road? 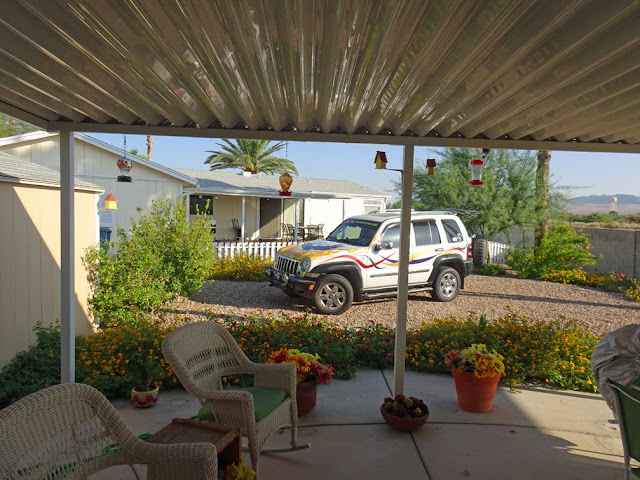 I continue to do jigsaw puzzles. This one is 500 pieces, I thought it would be mildly hard. I was mistaken it went really fast. Had to force myself to stop working on it. So it could amuse me for a couple of days. I have one 100 piece and one 500 piece puzzles left from the box. And have ordered another 10 puzzles box. 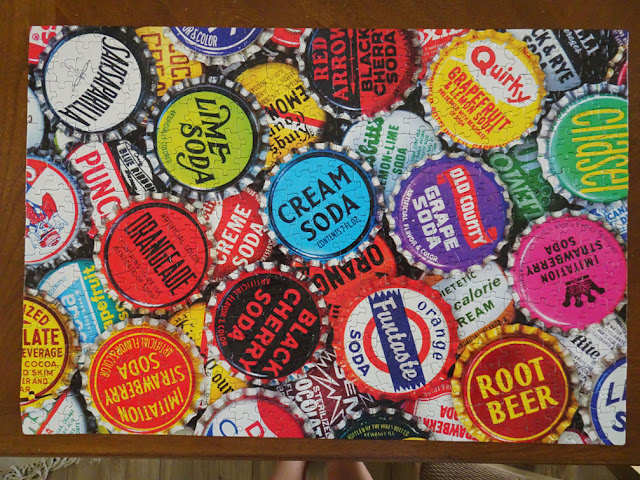 Bill pointed out to me that my ocotillo is really starting to come back. Getting a few new branches and lots and lots of leaves. I thought it was a goner when we had the gardener cut off all the dead branches. 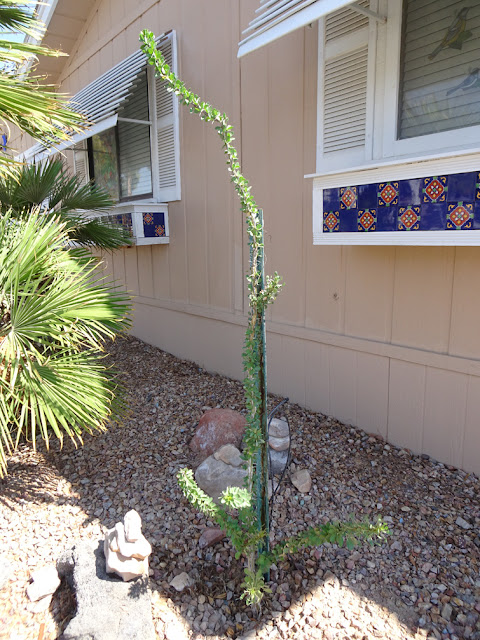 And here sits Willie in the front, waiting to go somewhere. 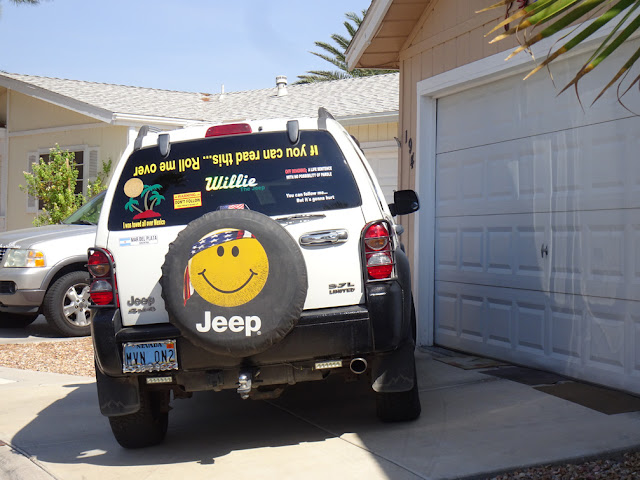 Just took this because of the colors and shadows and lines. 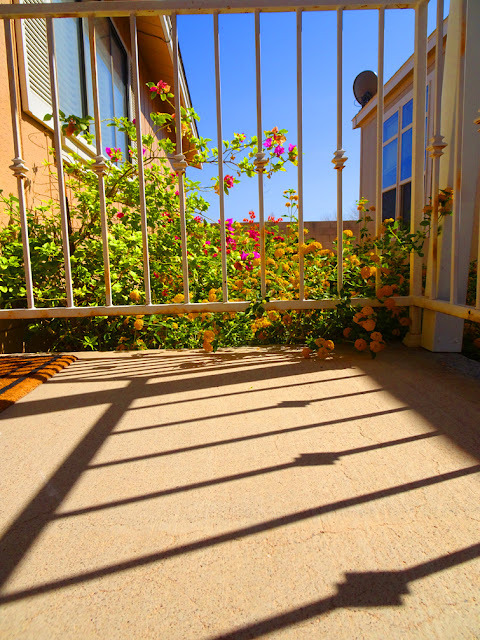 Went out front last evening to see how the sunset was going. He popped across the street in front of me. I jumped straight up until I realized it was a bunny. Then he stopped and looked back at me as if to say "ha ha - made you jump!" 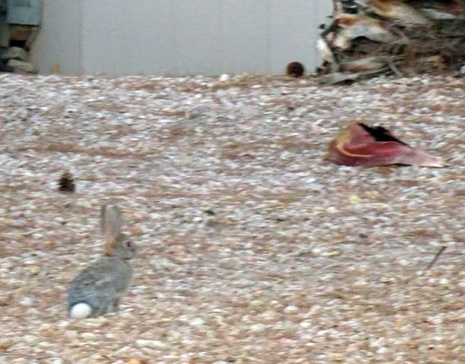 The sunset was not what I expected, so thought I'd come out to look too late. 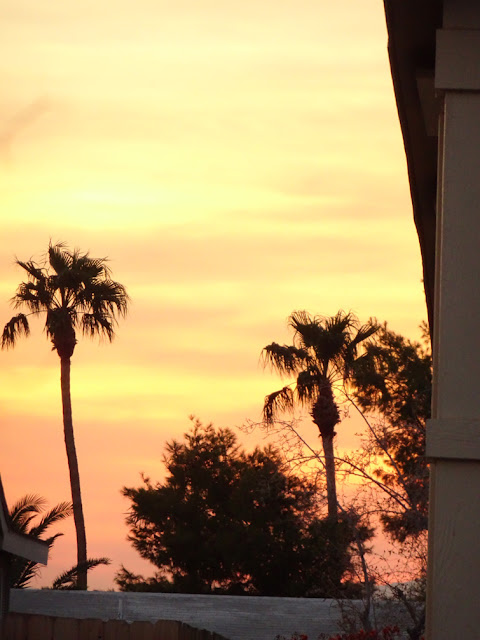 Went back inside and happened to look out again about five minutes later. Grabbed camera and ran out. Beautiful. Of course, some of it is from all the smoke in the air. 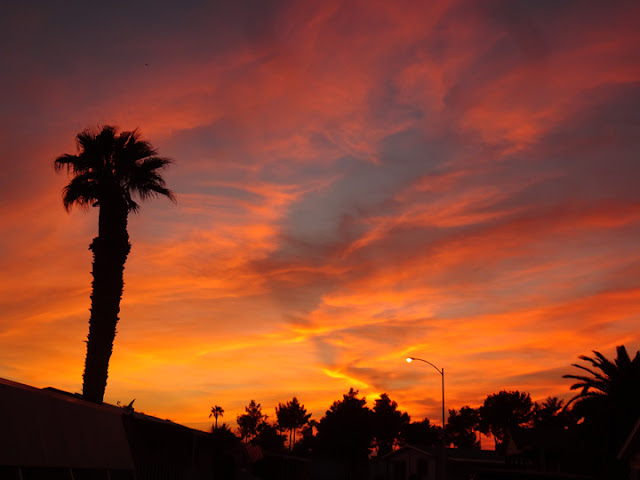 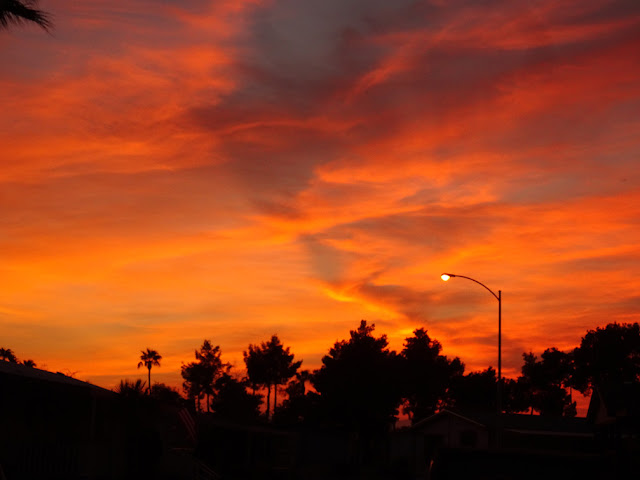 It got really red before fading. 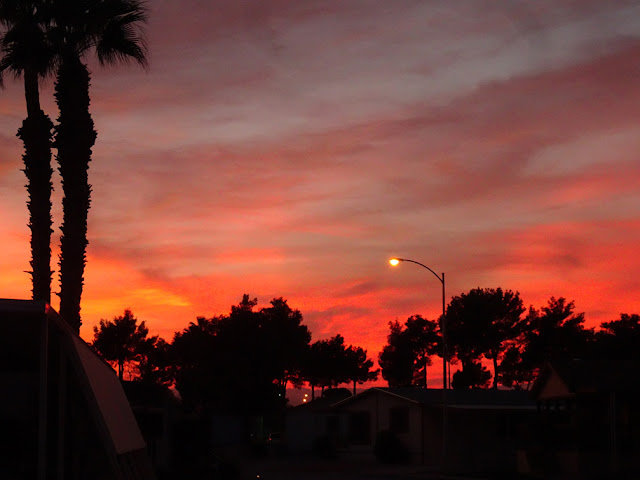 Reflection on the hood of the Jeep. 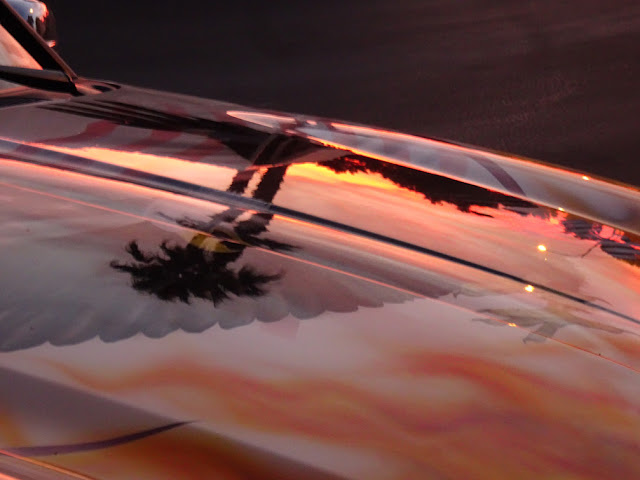 Trip to the eye doctor was not a good experience. We got there at 2:15 for a 2:30 appointment. There were four people already in waiting room. Also as we walked in we could hear SCREAMING coming from the examination rooms. "Open your eyes, keep breathing, look at me, breath." Etc. Someone had had some kind of seizure, heart attack or something. This continued for 20 minutes until the paramedics arrived. By 3:15 they were gone. More people in waiting room. About 3:30 they started calling in people. Finally around 4 they called Bill. Examined by a nurse then taken to ANOTHER waiting room. Where there sat the same four people PLUS about five more people. The waiting room was FREEZING! I was cold so Bill was frozen. Another hour before his time to see doctor. Back and forth about treatment. Shot in eye. Decided to do it. He handed me the keys to the car as he came out of the treatment room. Oh, oh. So I drove and promptly got lost. Forgot I had to go to main street and instead turned one street to soon. In a few blocks, I realized I didn't know where we were...So decided if I kept the setting sun to my left we'd eventually come to something I'd recognize. And we did and it was actually a better way home. We got home at 6:35 While we were still there the nurse was trying to appease us by saying, "Oh yes, all our appointments run at least two hours long. Our patients bring their books and sweaters and some even bring SNACKS."  Snacks? you've got to be kidding. "No, they bring snacks." Didn't make any points with either of us.  They also told us someone would call us the next day to see how Bill was doing. No one called. And he was having quite a bit of pain in that eye from the shot. Don't think we'll be returning there. Eye is still sore and treatment involves at least two more shots in eye...spaced six weeks apart. Enough of that.
Today we will be watching a soccer game and a Cup NASCAR race. Might or might not fix dinner.
Posted by Carol and Bill at 10:25 AM

Here it is only person allowed into the office at a time. You check in by cell and then they call you when ready.
No seats, no snacks, no magazines allowed. Even my hairdresser is like that never mind the doctor/dentist.

I wouldn't trust a doctors office that is not practicing social distancing, and making patients wait so long. I would find another clinic. Hope Bill's eye issues get resolved soon so you can get on your way to Mexico for the winter.