Thursday afternoon look who we got home. Every thing is working fine and all damage thieves did has been repaired. But you can bet I really cleaned him. Sprayed so much Lysol around the alarm went off. 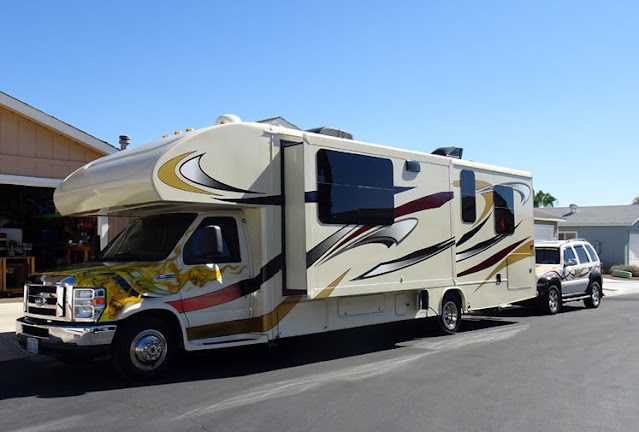 So we decided it was time to GO - we've been home long enough. The rest of Thursday and all of Friday were loading days. Which also includes doing a lot of cleaning and straightening of house. Wednesday, Thursday and Friday I got over 9000 steps each day.  Now I'm sitting down and don't intend to get up. LEAVING LAS VEGAS at 9:30 this morning. 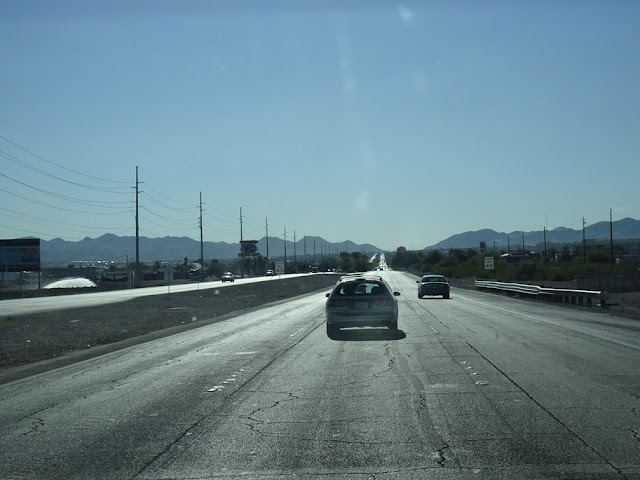 Pretty uneventful trip. Some wind after getting on the I-40 (which in places is in worse shape than ever)
Crossing the Colorado River. First time I've ever seen that many boats on the river. Maybe because we usually don't travel on weekend days. 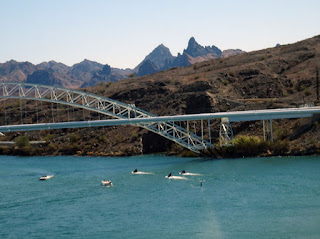 Crossing into Arizona. I should have a dollar for every time I've taken a picture of this sign. 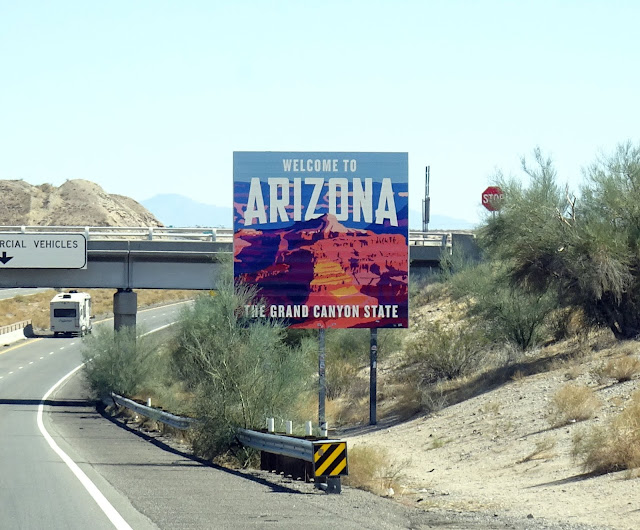 Lots and lots of people traveling. A big off road competition in the desert. I tend to forget how rugged the landscape is around the area. Like some thing out of a prehistoric movie. 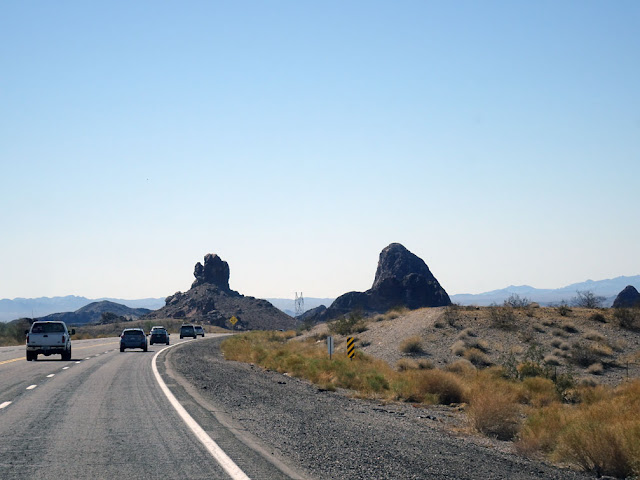 So we did 213 miles - both of us were glad when we got here to Quartzsite. Took us about 4 1/2 hours. Not in a rush and lots of traffic out and about today. So getting settled in. Also discovered more things the thieves took - our electric blanket is gone, but the controls are still here. Also Bill is missing one of his gadgets. Something to do with the speedometer - a separate gage that is easy to read and tells him all kinds of stuff. 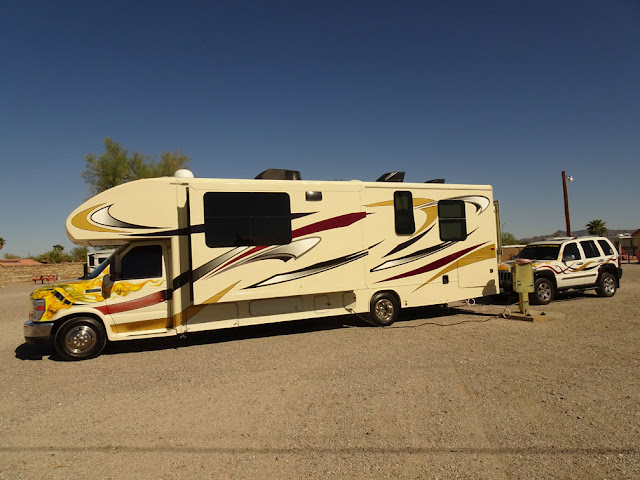 Got everything set up, that I have remembered, and tried to sign into the parks Internet. Whoops - messed up my laptop. Nothing but a BLACK screen. Turned it off and on several times, same black screen. Next time I turned it on I pressed every key I could think of - one of them worked cause it is working now. But I'm kind of afraid to turn it off again. So I'm using my Verizon MiFi. Now I have to call Dish TV to change our address on it so I can get the local channels so I can watch the NASCAR race tomorrow.  Any way I am hoping that will work. But don't know where "local" channels would come from out here in middle of desert. Oh just lovely - got the local channels but NBC is not available at this time. CRAP
PS no idea what that "label" thing is - and don't know how to get rid of it.
Posted by Carol and Bill at 4:06 PM

Email ThisBlogThis!Share to TwitterShare to FacebookShare to Pinterest
Labels: Mural by Peggy Colson takes us back in time. It shows the sight seen in the 1940s when

So glad you are on the road. We will keep a watchful eye out for your adventures. I just don't think we will be coming. Of course, now they talk about us needing to get a third booster but no schedule when that will happen!!!

We already had our third one. And still wear the horrid masks. Sure wish you guys could make it.

Shiny clean RV and on the road again. Stay well and stay safe

Safe travels!
We'll be home for this winter.

Wonderful to see you guys traveling again. Please be sure and document all the Mexico entry issues and road conditions even Toll booth status
We will be following you in November.

Sandy - thank you -
Jackie - we will miss you guys
Mike and Lorie - good to hear from you. will try to keep notes and post. If your in Maz - get in touch with us. Be nice to see you again.