Plans are made to be changed.

The fates laugh when we make plans don't they. We will hear this morning if a water heater can be found, when it will show up and when it can be installed. Do you believe that the WHOLE mobile repair company is going on a one week vacation starting Sunday. Maybe if the heater gets here soon Maybe they can squeeze us in before they leave - otherwise... The whole interior of it was corroded. No saving it.  Well we've called another mobile service, he doesn't believe the whole thing needs to be replaced. He'll be here Sunday. So guess we will be staying in this NICE park for a while longer,

It got so cold here last night. I woke up freezing and I'm never cold. Bill got up and turned the furnace on but he pushed the wrong button and just the fan was blowing, no warm air. I got up about 5:30 - wondered why the air was cold. Got the flashlight and figured it out. Finally warming up in here. We need to replace our electric blanket. Should have gone to Penny's yesterday, there was one next to Best Buy. But didn't, will today. Supposed to get up to high 80's today though.

Our experience with Best Buy was bad. They had four clerks in the whole store. Customers standing around waiting to be helped. We waited about a half hour. Would have left if there was some where else to go. The day before I found a laptop in WalMart I would have bought. Not in stock, not at any WalMart in Tucson. They had the same one in Best Buy for $300 more - no thanks. I ended up getting just a basic HP. It works for me.

There are two good mobile RV services here in Amado. We had called both of them - the first one that called us back we had come out. Wish now we'd used the other one - he is probably not going on vacation. (see above) The RV park we usually stay in here in Amado has no spaces available they are full of construction workers until end of December so we are staying in the one next door De Anza RESORT! Which means it is way more expensive and just a tiny bit nicer, but not THAT much nicer.  Some pictures from the park.

But about the water heater, it is the tankless kind. Which I hate - but cant do anything about that. But the poor repair guy he had to work on it through this tiny vent hole. They thought the screen on the water intake was plugged and this was the only way to get to it. It wasn't so then he took the whole heater out from the front. (this is the only picture I've taken in 2 days.) He had to get a flashlight and his camera phone and his arm in there! 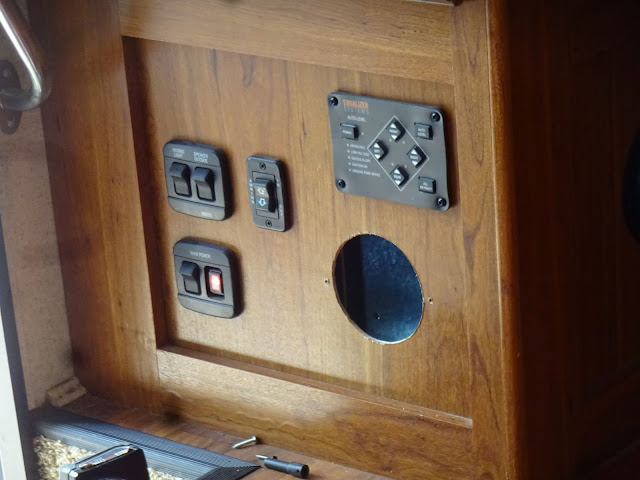 So here we sit for a while. Going to go to Mexico tomorrow to do all our paper work, so in the RV we'll just have to drive on.
Bill also called the RV tech in Mazatlan, he says he'd look at the water heater when we get there and if need be he can order from the states...but how long will we be without hot water.
Posted by Carol and Bill at 2:04 PM