Jackpot! Well not money, just where we stopped today.

We were watching the soccer game last night, Columbia vs Chile, played in Chicago and the game had to be stopped for TWO hours at half time because of dangerous weather. So the TV replayed Tuesdays game USA vs Argentina. That Messi is unbelievable.
Just a pretty Ely day. Blue sky and puffy white clouds. 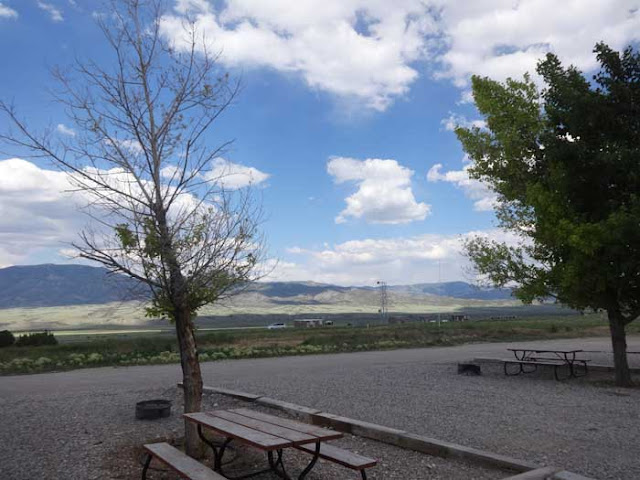 Sunset was interesting from the campground. As the sun was going down it turned the mountains across the valley a pretty pink. 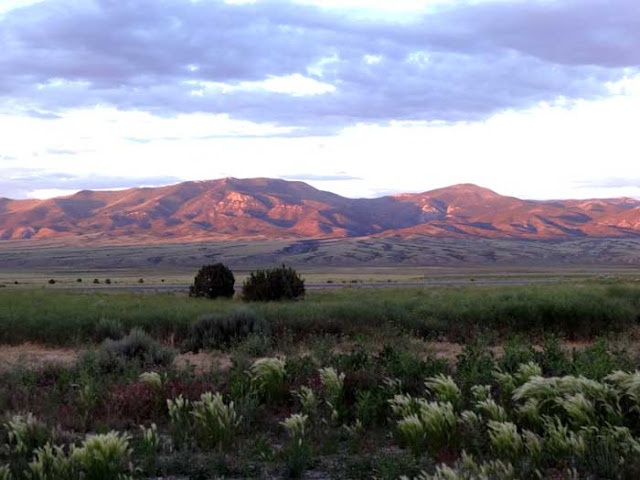 And this weird little pink cloud. Looks like a tooth root. Maybe it's the engines from an alien ship heading for home. 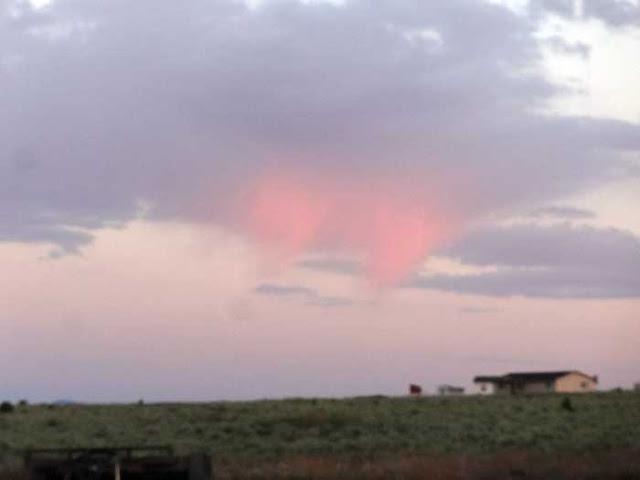 Just playing with the camera, an oil painting and an illustration setting. 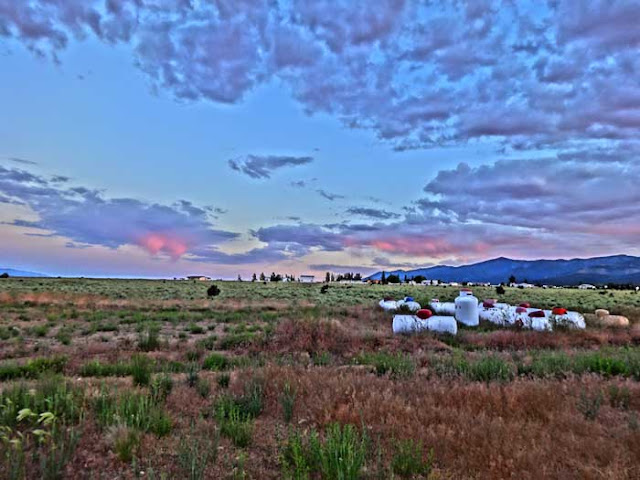 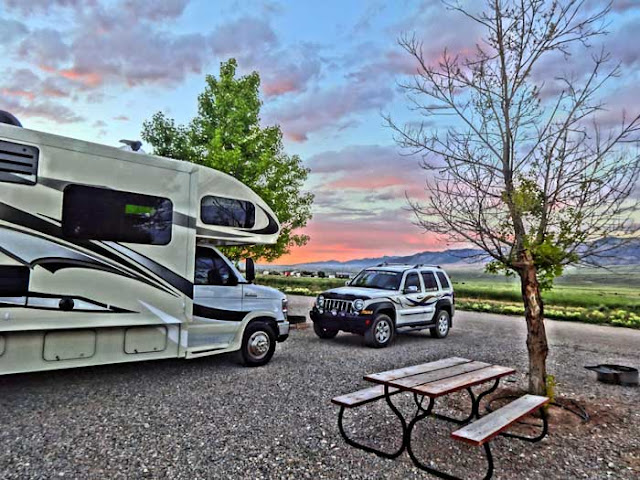 The more time we spend in this RV the more I wish we had kept the Alfa. It’s a good thing it is gone or I’d want to keep it.
Just little things that are different. The noise from the engine when we’re traveling. The Alfa’s engine was in the back and we never heard it. The noise of the roof air conditioning – the Alfa had basement air and was very quiet. This coach has an on-demand water heater, which sounds like a good idea. But either I’m too dumb to figure out how to set the shower faucets or it just hates me. When taking a shower the water switches from hot to cold without touching the faucets. Then back again. Not fun and hope I figure it out soon. We had an on-demand - tankless - waterheater in Indiana in the house and I hated it there too.
Also discovered the kitchen sink is plastic not ceramic. It melts if something hot touches it. Don't ask! But it is something to look for if you are RV shopping Also cannot use comet or ajax powder on it. Things we’ll have to get used to. For experienced motorhomers we sure didn’t do our due diligence before buying this. But we will learn to live with its foibles. There were things we didn't like about the Alfa at first too.

We left Ely this morning at 8:00, stopped for gas. We are so far averaging 8mpg. One more gas up and I'll have better averages. We had planned on stopping in Wells at 140 miles, instead we just stopped there for lunch and continued on to Jackpot. Staying at Cactus Petes for $22. Site is level, gravel with grass on both sides. Some of the sites have shade trees. WiFi so far is good. Good TV reception. Ended up doing 206 miles - the most we've done in this RV in a day. We opted for no trees for the satellite TV 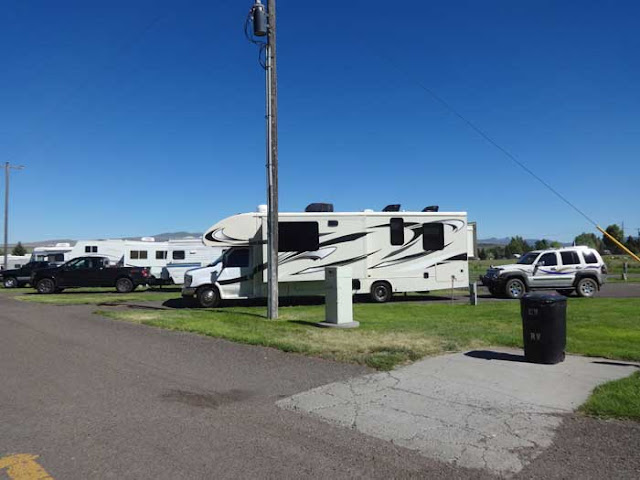 Lots of trees in this row. 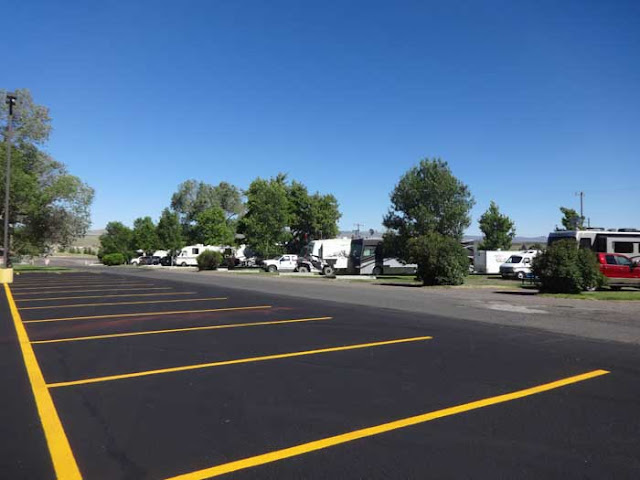 About the only thing interesting for the day was seeing all the snow still on the Ruby Mountains. 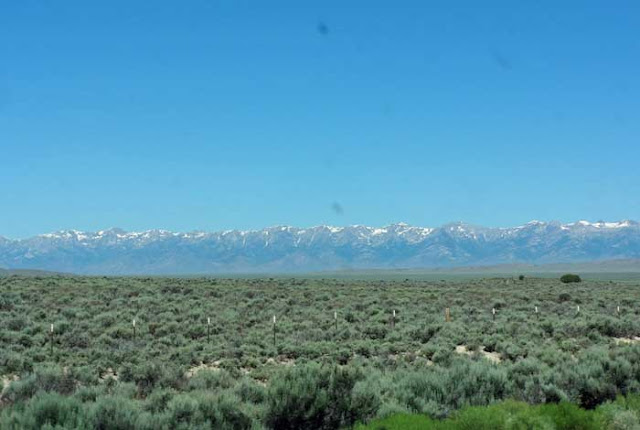 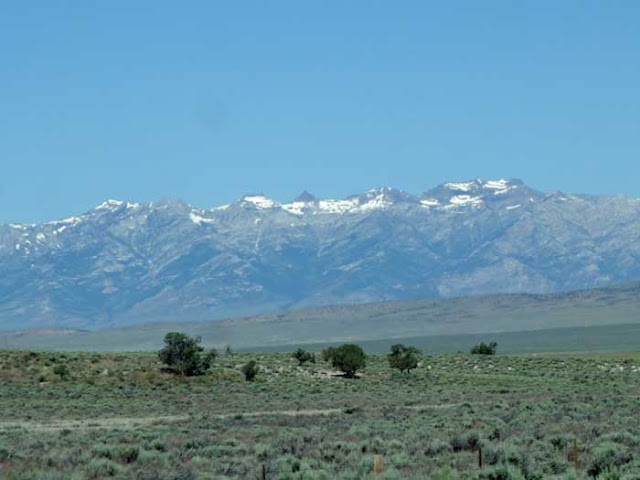 And three sections of "one lane only" construction. 15 minute waits at two of them. Short red light at last one. 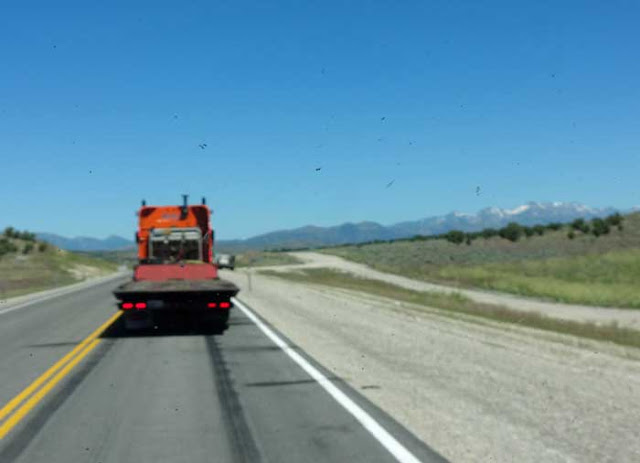 This truck is transporting holes, shouldn't weight much. Or maybe they are hula hoops? 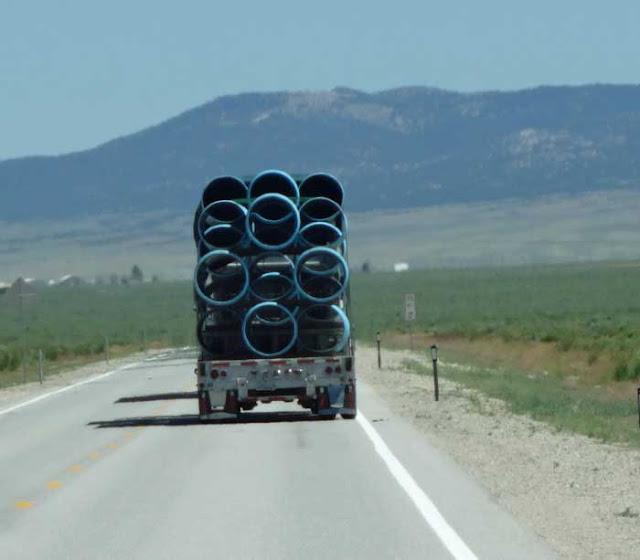 Walked over and walked around the casino. Bigger and nicer than I thought it would be. I sure don't understand the new slot machines. Seems like you'd need an engineers degree to use them. This one was 3D - made me dizzy watching it. 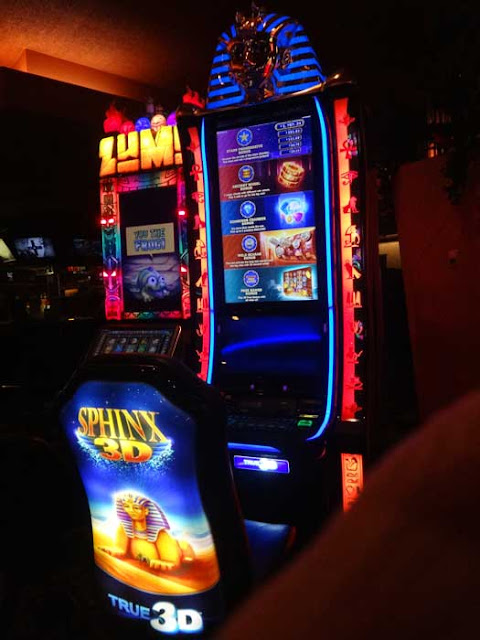 Walking back to the RV we passed the Jackpot National Forest., between the casino and the campground. 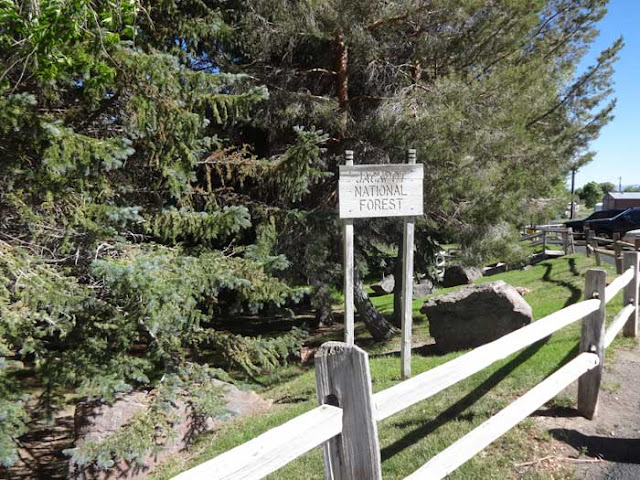 Tomorrow we'll be going to the little town of Hagerman just west of Twin Falls. Hopefully we can get TV - as it is road race weekend and the final Copa America game with Argentina vs Chile.

We have friends that also just got a new motorhome with the on demand hot water. After a month they paid to have a standard hot water heater installed in it. :-(

Hope you have better luck figuring out yours.

Love the illustration setting of the RV and Willie! Really cool looking!

I am Alecia used every single spell worker on the internet, spent untold amounts of money and discovered they are all fakes…i was the fool though; doing the same thing over and over again and expecting different results. In the end, I decided that I wanted a tarot reading to know what my future held for me; I contacted a woman who lives locally to me and she told me about a man named (Dr Abalaka); he does not advertise on the internet, has another job for income, has no set prices, makes no false promises and refuses to help anyone that cannot be helped and even helps for free sometimes, he will give you proof before taking money. He is a wonderful man and he was the only person who actually gave me real results. I really hope he doesn’t mind me advertising his contact on the internet but I’m sure any help/ extra work will benefit him.contact him as dr.abalaka@outlook.com He travel sometimes.love marriage,finance, job promotion ,gambling voodoo,lottery Voodoo,poker voodoo,golf Voodoo,Law & Court case Spells,money voodoo,weigh loss voodoo,any sicknesses voodoo,Trouble in marriage,it’s all he does Hope this helps everyone that is in a desperate situation as I once was; I know how it feels to hold onto something and never have a chance to move on because of the false promises and then to feel trapped in wanting something
more. his cell phone number 5182932141 !