Rain in Vegas - all ten drops.

My last post I mentioned the thunder and slight rain we got. After I finished posting we actually got more rain. Looking east toward the desert, you can see where it is really raining. 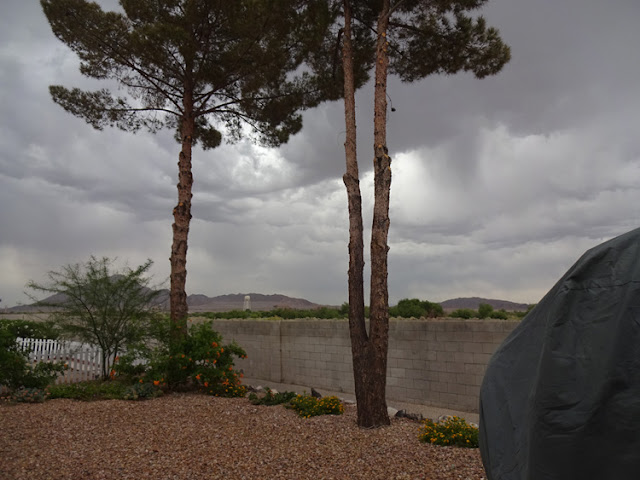 By looking at the patio you can see how much rain our area got. Not very much. That was all of it. But there was a nice smell from the desert and a great breeze. 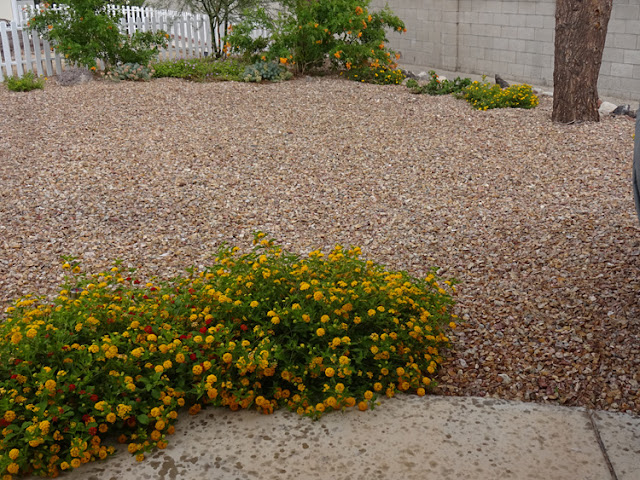 I think I also mentioned the problems I was having with my old laptop running Windows XP and the embroidery software for my sewing machine. I tried loading the program into my newer laptop running Windows 7 - it refused to completely load. I called the Geek squad to see if they could restore my laptops XP. No, it is no longer supported so they couldn't do that. I tried doing a system restore but somehow the date in the laptop had changed to 2049 so it wouldn't restore. So I went on line and asked if the embroidery program could be made to run on Windows 7 - basically the answers were No. But then I found a site named "Justanswer.com" I posed my question to them. A few minutes later got a reply that I needed to join to talk to a technician. It would cost $5. So I paid my five dollars. Was told I would receive and answer as soon as they could check into my problem. Time passed...I figured I'd just thrown away 5 dollars. Well about 8:00 that night I got a reply with several instructions on how to load the embroidery program into Windows 7. Also several links to parts of the program that were not on the disks. Decided to wait until morning to try it.
Bright and early - well around 8:00 I started to follow the instructions. Downloaded all the extra links, loaded the disks into the laptop. [One important part of the instructions was to put the dongle/hasp into the computer before doing anything else - usually it is inserted into the computer as the very last step of loading program.] The thing with the red dot is the hasp - without it the program wont work at all. 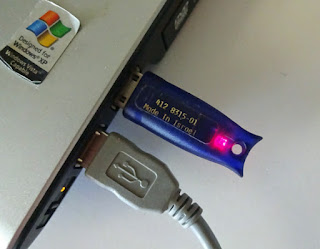 Everything went fine - until I tried to use the part of the program that puts the design from the computer onto a special disk that goes into the sewing machine. That WOULD NOT WORK. Without it I had nothing. Only suggestion was to uninstall and reload all again. Still didn't work. Then I had a brainstorm - why not try this on the old laptop with XP.
The disk/card the pattern goes on and the reader/writer that puts the design from the laptop to the disk and then to the machine. 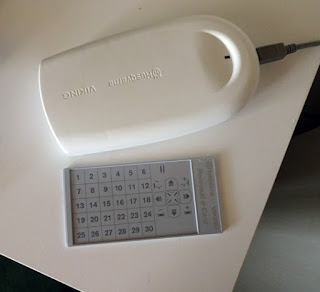 The card in the reader. 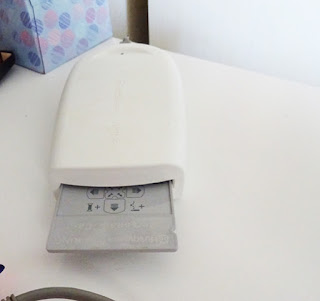 This is where it goes in the sewing machine. The card in it in this  picture contains about 30 different stitches. 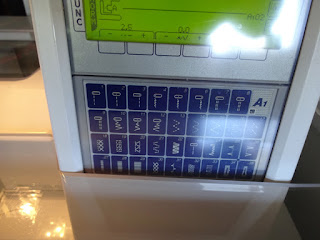 I finally figured out how to change the date on the laptop, tried a system restore again. Then I got the instructions and followed them again. When I finished I tried the program. It loaded and seemed to be running fine. Then I plugged in the card reader/writer - it didn't work. Hum...Shut the laptop off. Turned it back on with card reader plugged in. Everything came up fine AND the card reader now worked. One of the labels I've transferred to the disk for the Christmas quit

I finally had everything working by a little after noon! Well worth the $5.00 charge. I've bookmarked the web site.
Later that afternoon, while I was recuperating - reading - Bill got to cooking again. He made several dozen bunuelos or as we call them apple fritters. The batter with the apple pieces. 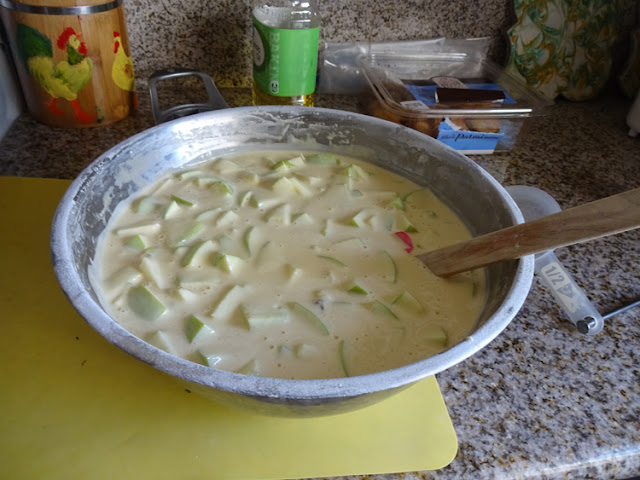 He also made some with banana slices. Just some of the finished product. Again, we freeze a lot of them for snacking another day. They have sugar sprinkled on them. 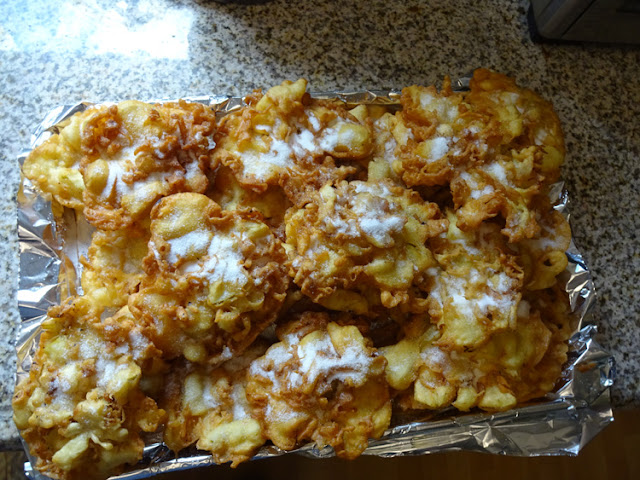 We went to WalMart and I finally remember to pick up an Arctic Air "as seen on TV" product. Bill is always so cold we don't have the AC on very low, so I'm usually kind of warm. So thought I'd give it a try. So far pleased with it. It plugs in either with a regular plug or USB plug. It is mostly filter with a water reservoir in it. And three speeds for the fan. Very quiet. Only thing is when filter gets dirty it has to be replaced, can't be cleaned. So guess I'll buy a couple to have for traveling. 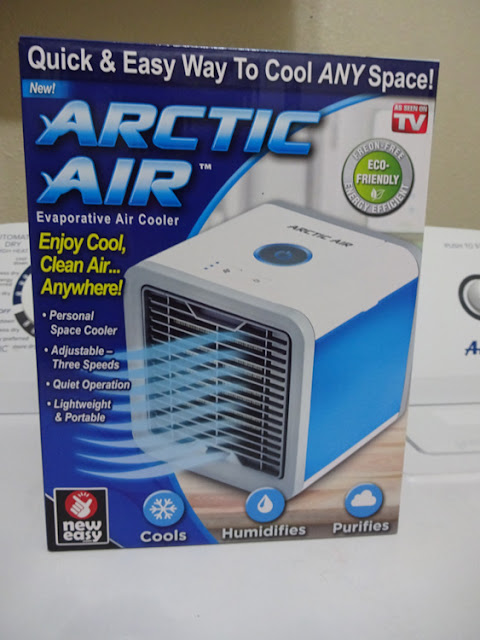 And the vents can be turned up or down. Used it last night when I was reading, very enjoyable. But I had to move it further away from me, got too cold on my shoulder. Also set it higher on the Kleenex bot to raise it above the arms of the sofa. I think it will work fine in the RV in Mexico too. I'll be cool and he'll be happy. 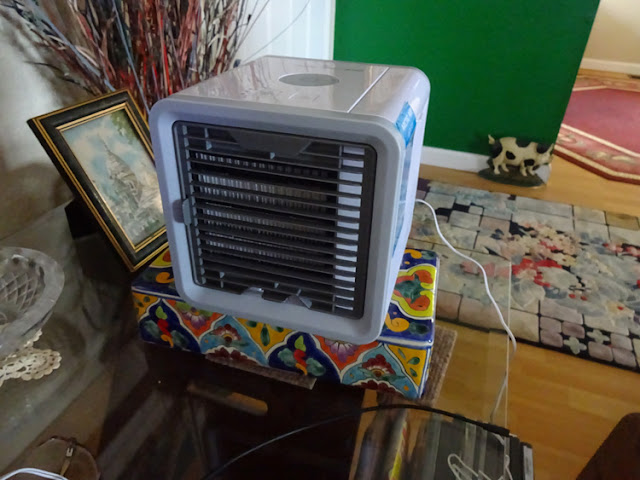 Not doing much this week. Tomorrow he has the surgery on his other eye. Hopefully it will go as well as the first one. So I'll probably doing my sewing of labels tomorrow while he is resting.

I have no idea how he does it. He never had anything written down.

Sending good thoughts for great results on your eye surgery. Carol you have a great deal more patience with that tech stuff than I do. Good for you and your tenacity....

You missed the 2.5" that Las Vegas had last January. I was at Valley of Fire and had same amount. Rained for most of three days and my campsite had tiny rivers running through it.

We heard about it from our son.

Either had to get it fixed or never use it again. Too expensive to buy new one.

Tell Bill I really want that recipe! He can make it and you can watch and write it down! Lol! Does that Arctic Air leak at all? I might need to get one since I don't have an air conditioner in my house.