All around good weekend 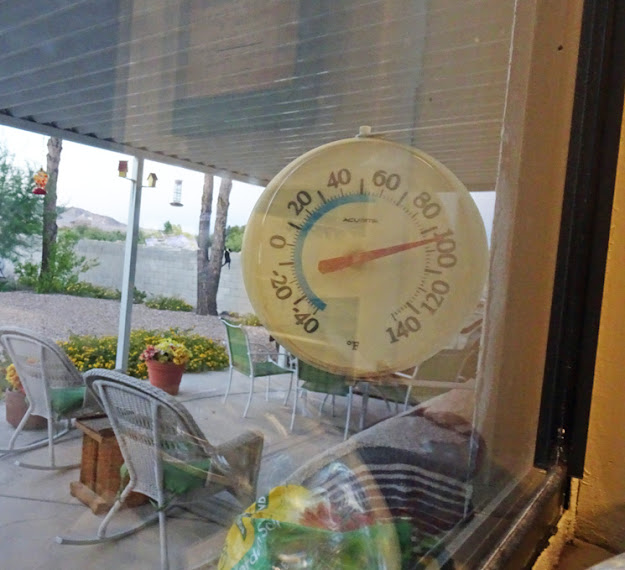 A little later I looked out the window and discovered three visitors. I've seen two before but never three. And usually they hop into the shade of the plants. Don't stay on the hot rocks long. 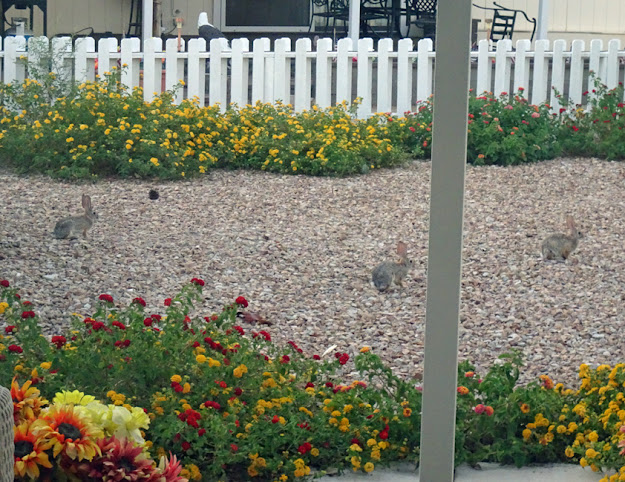 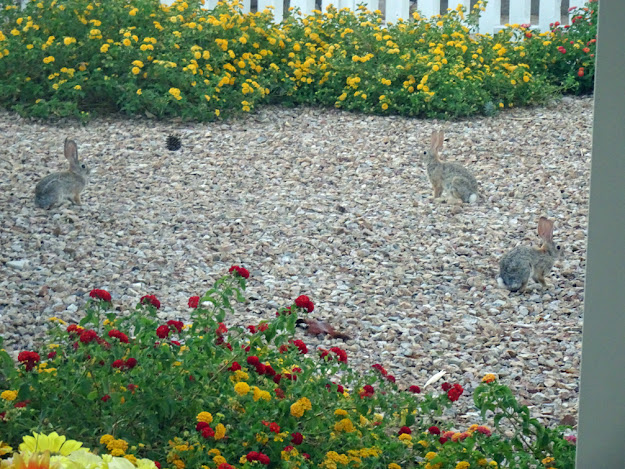 The flooring, baseboards and repairs pertaining to the floor is mostly done. Love the new look. Also love the fact we had two days of quiet and no one else being here. 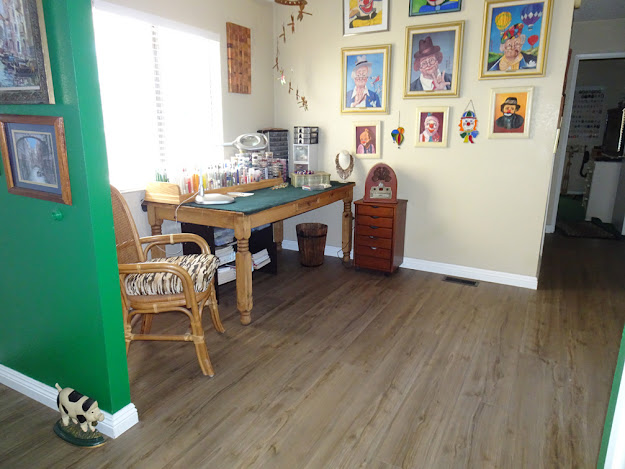 Little by little I have put most of our "stuff" back where it belongs. All of it got scrubbed first. Lots of memories we've collected. Still going to get this rug cleaned, but waiting until everything is done. 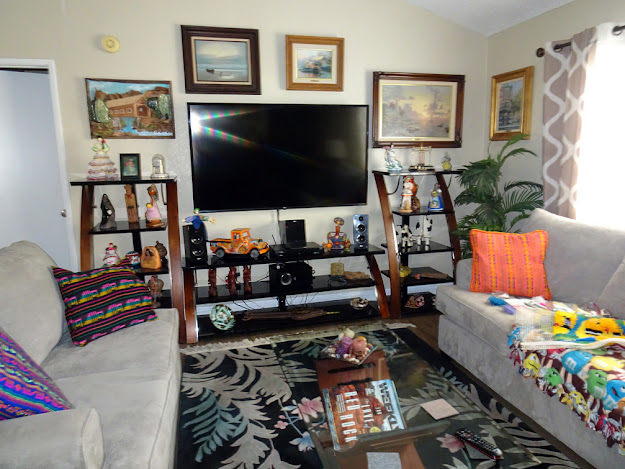 And even more stuff. This is where all the booze goes. I put the wines back but the other stuff is still in the bathtub. The change of flooring sure makes everything look different. 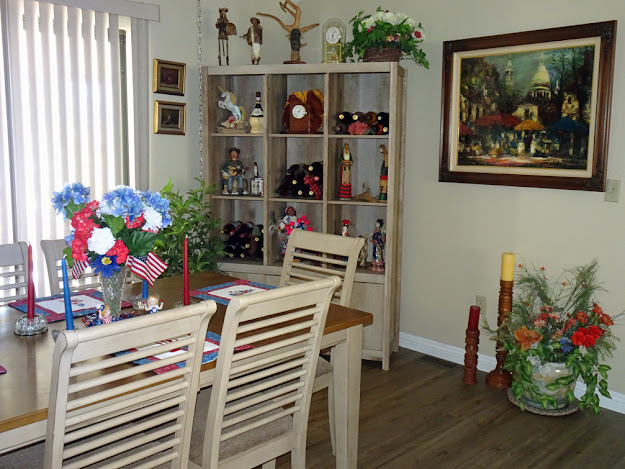 By the end of the week the kitchen cabinet guy should be coming to do that. We finally got the check from the insurance company so have to take it to main office and they will ship it to mortgage company and hopefully they will quickly pay contractor some money.
Realized the sun wasn't as bright as usual so went outside to look around. Hum...guess Bill is finally going to get the extension on the patio roof so it will cover the car. 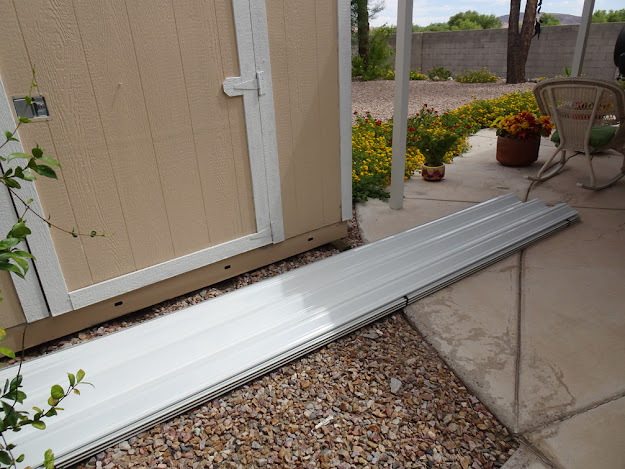 Because no one is here working the Jeep is back in its parking place. The cover will extend out far enough to cover it. Protecting the paint job is a must. 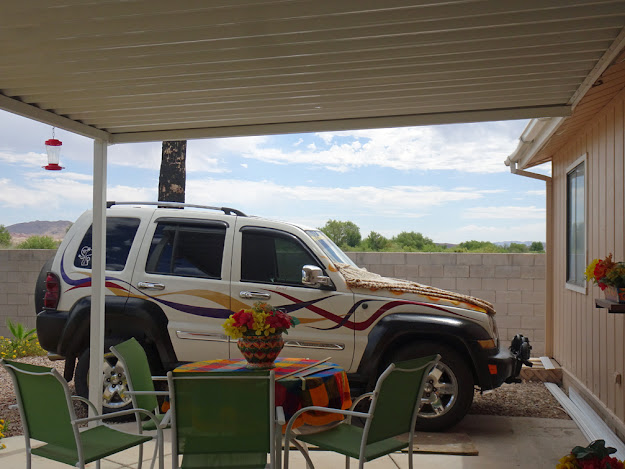 Wow more clouds then we've seen in  a long time. Kind of pretty. Last wee the tree maintenance people the park hires came and trimmed the palm tree.l Just a couple of fronds left up there. 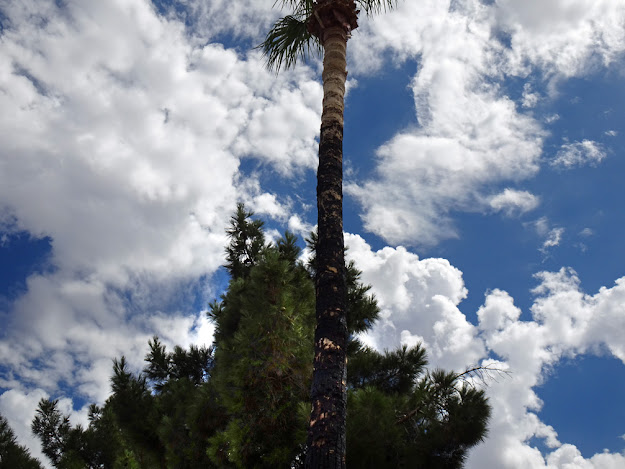 Back in the house for a while when there was a huge CRASH - I thought someone had run into the house. Nope - it was thunder. Really close and loud thunder. Several thunders later we got about 30 seconds of rain. Had to be quick to get a picture. 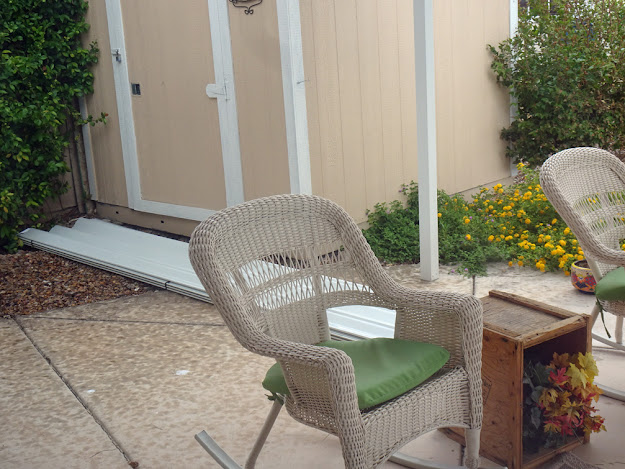 Looks like it rained hard out front then in the back. No rain predicted until Wednesday. Desert surprises. Didn't cool down a bit though. But the wind sure picked up. 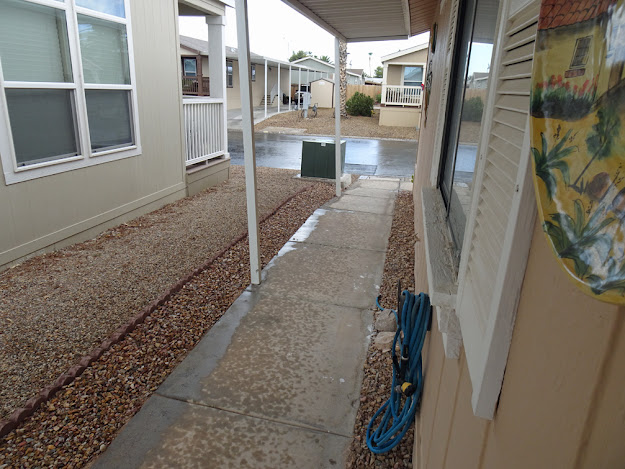 I canceled my subscription to Ancestry.com . I could trace my mother's and father's families back to Sweden for Mom and Ireland for Dad. But could not get any information on Bill's family at all. Oh well. Didn't know how closely tied we were to Sweden and Ireland. All great great grand parents were born overseas.
Spent a good part of the weekend watching NASCAR on TV  Kyle Busch drove in all three races at Texas. Won two of them - though one win was taken away because car was out of compliance. And he ended up 4th in the main cup race. Good weekend.
Also watched a soccer game. Barcelona won, but did not win the league championship. Oh well next year. However Messi did win the trophy for most goals during the year.
Today the workers are supposed to come back and finish the baseboard in small room and replace cabinets in hallway and laundry room then do touch up painting. And build patio extension.
Posted by Carol and Bill at 7:42 AM

The bunnies out here are dying from a new deadly virus. Hope it doesn't get up to your area.

Flopsy, Mopsy, and Cottontail?? I got a chance to visit Peter Rabbit's home in the Lake District when I went to England. There is even a garden, but I hope your rabbits do not eat all the stuff the way the badly behaved Peter did in the books! Judy

Barb - I so they don't, so far they seem to be multiplying.
If they start munching on the flowers we spread some mothballs and they don't go near them again. So far this year they are behaving.

I have a rabbit around that has discovered my vegetable garden and that doesnt make me happy. Glad you're getting back to normal. I see an awful lot of treasures that require dusting! Lots of work to keep up.