A beautiful Wednesday morning here in the desert. This is what we did yesterday
Some of the plants here in the campground. 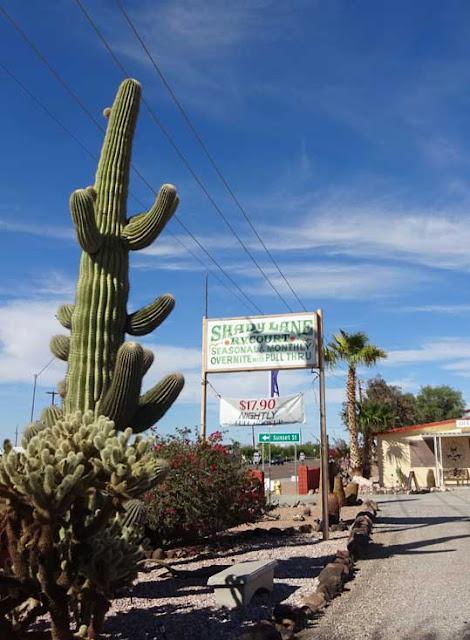 Wish my ocotillo looked like these. I think it died, guess I'll know for sure in the Spring. 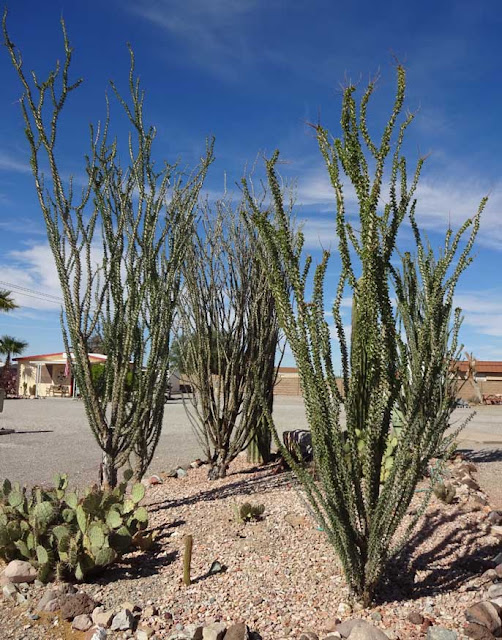 We are still in Quartzsite as there are a couple of things here I want to see. And there is a satellite technician/installer here who is familiar with Dish TV.
Think I mentioned that yesterday when we got here the Dish TV worked fine. Then we turned it off. Next time we turned it on we could hear the satellite moving but it never connected with any satellite - no TV. Thought maybe because it was so overcast out. But this morning, clear sky and still no satellite connection. So we called the satellite guy, he came over in about an hour. Worked and worked and changed things, no satellite connection - all at $50 an hour. So he ended up taking the Wally box with him to the shop to completely reset it. If that doesn't work we might have to change our satellite system...grrr. I think my friend at Dish is going to hear from me again. What a mess.
Any way – before we went any where Bill was out cleaning Willie up some. Can’t do much with just a rag. NO WASHING allowed here in the park. 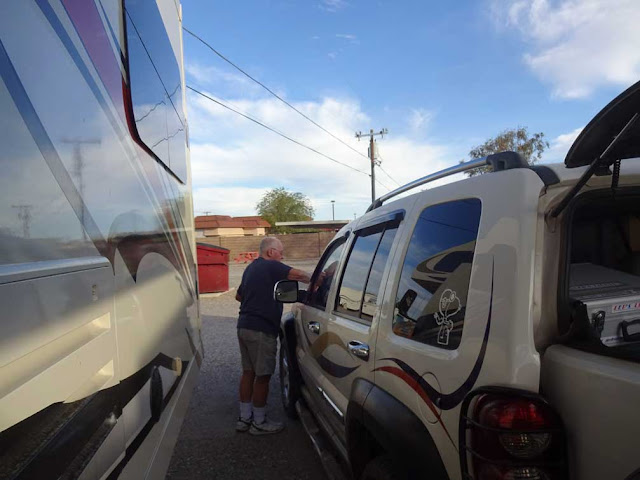 This part will wait till another time. 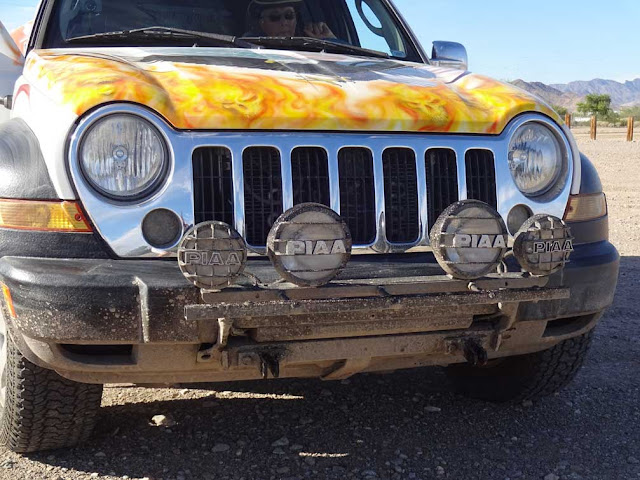 Then we went out for breakfast then headed over to the Radio Control park.  Passed a skate board park on the way. Liked this sculpture of young boy on his board. 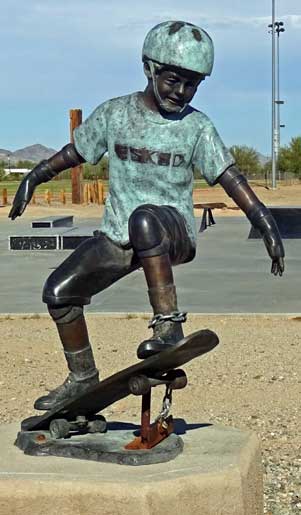 The RC park has seen some upgrades since we were here last. 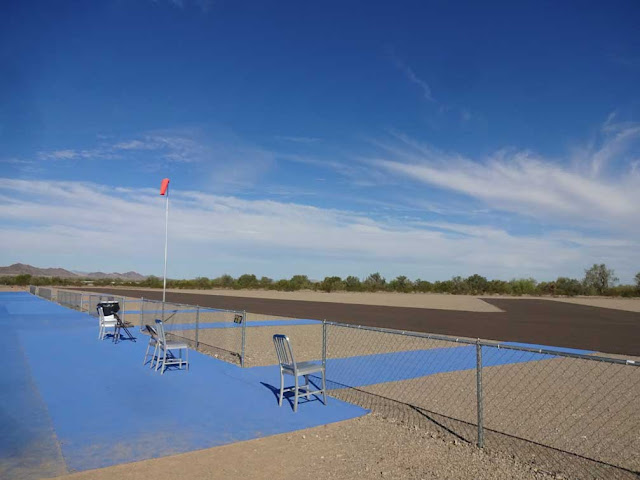 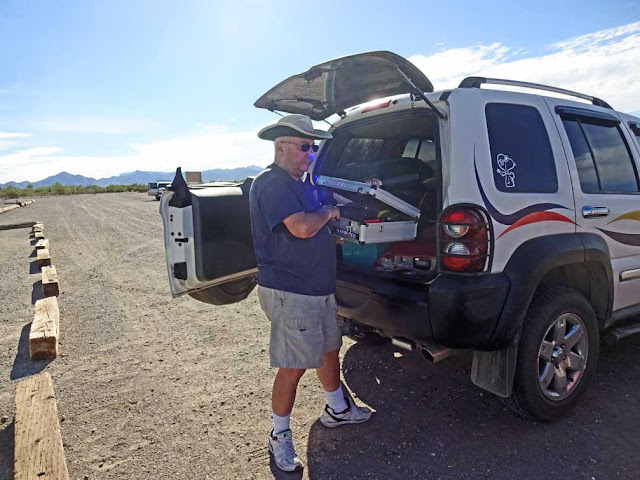 Bill got his drone out and flew it a little bit. 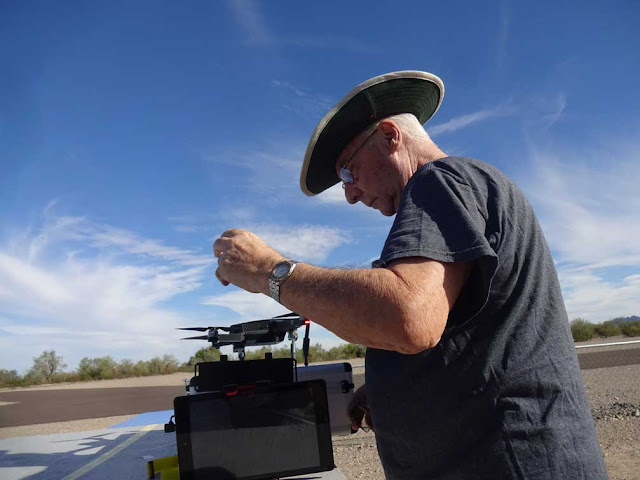 Then we drove over to the Rainbow Garden. It is 20 acres set aside as a nature trail and an area for people to remember their loved ones who have passed. It sounds morbid but it is really a peaceful and interesting area. The girl the park was started for, she passed away at 8 years old. 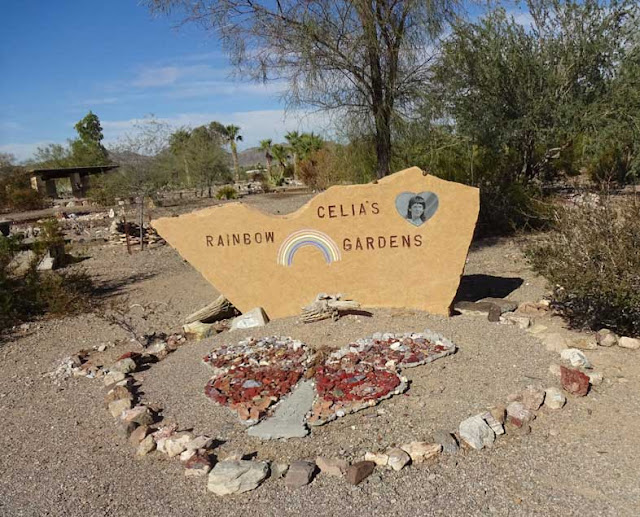 Just some pictures of a few of the many memorials. 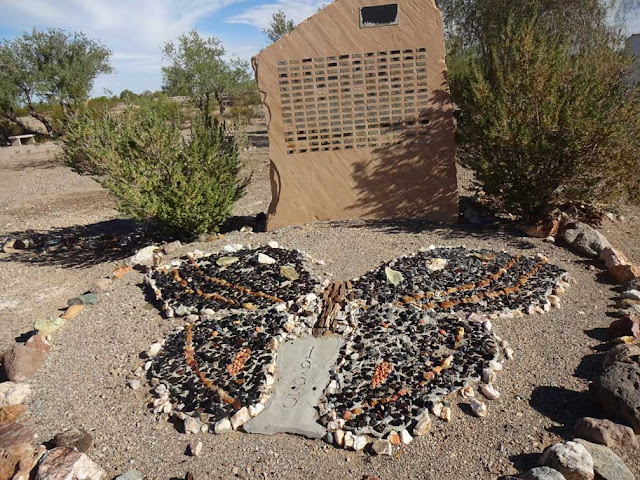 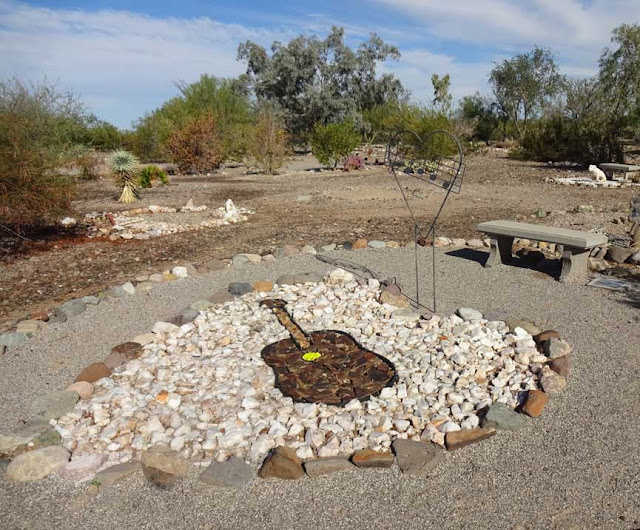 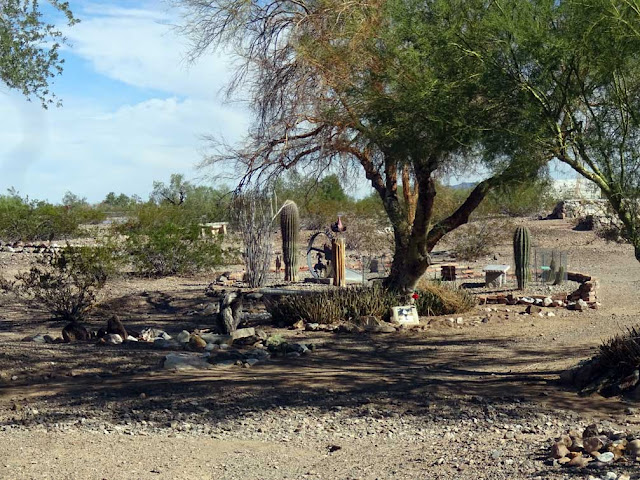 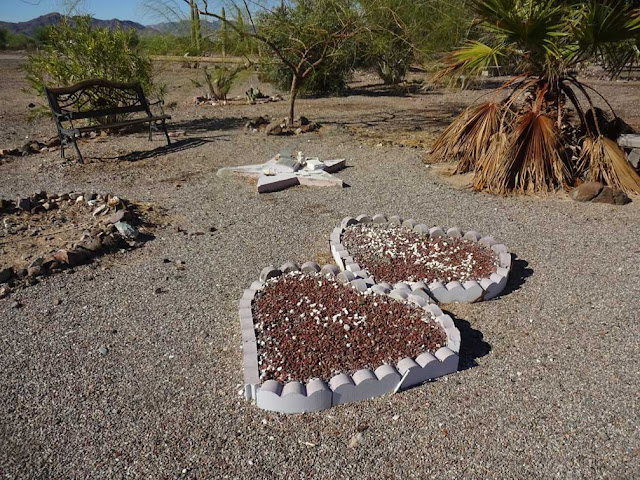 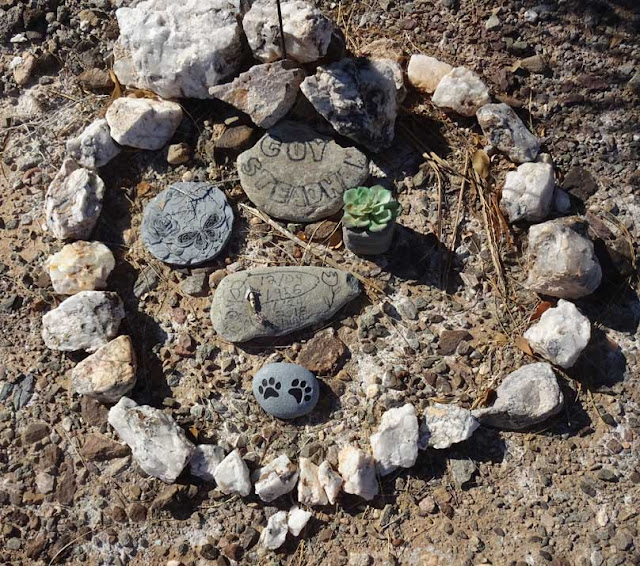 Also inside the park is a display showing the desert area around here and what rocks and gems can be found where. The black lines are the main roads. 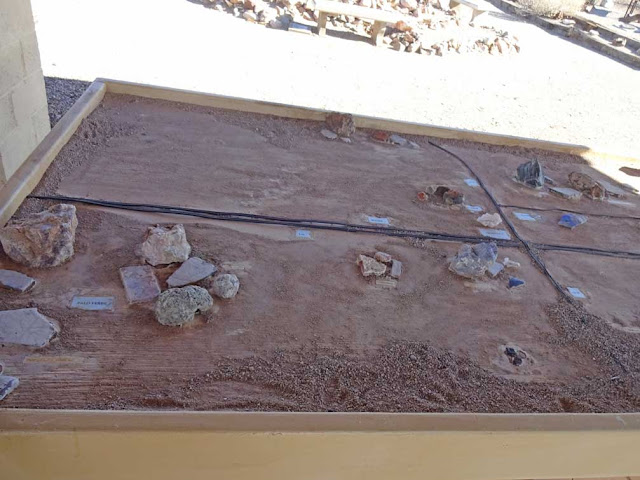 Then there are samples of rocks in the areas where they can be found. 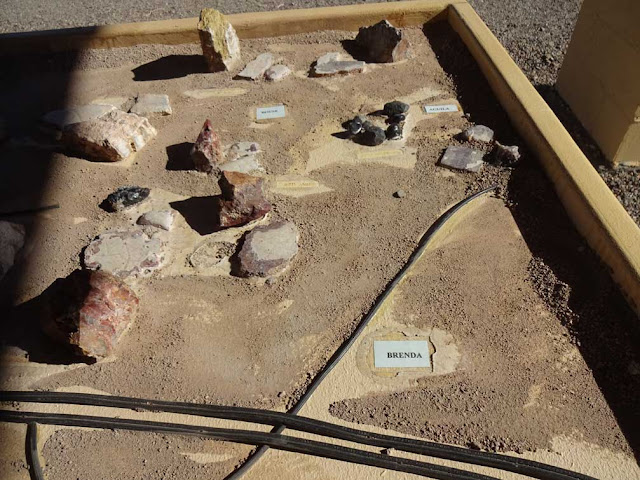 Another part of the park has a miniature town in it. 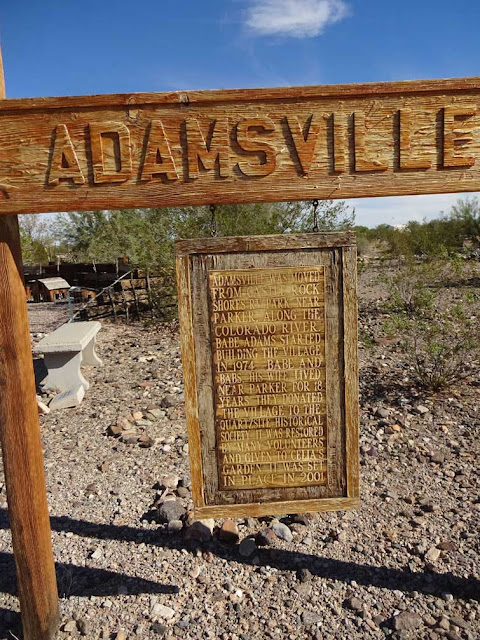 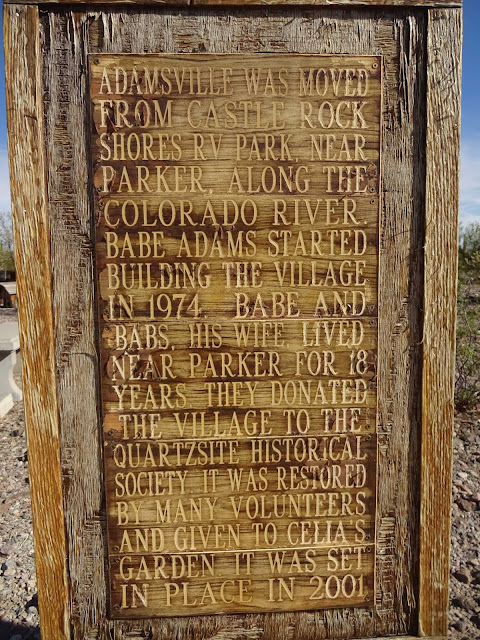 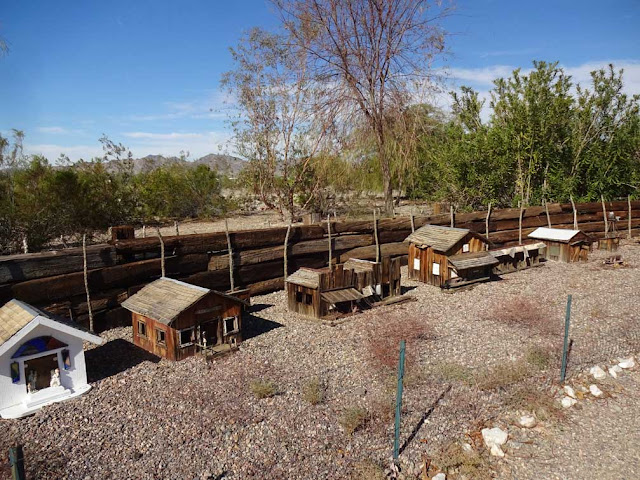 Just a few of the little buildings. Lots of detail including some people. 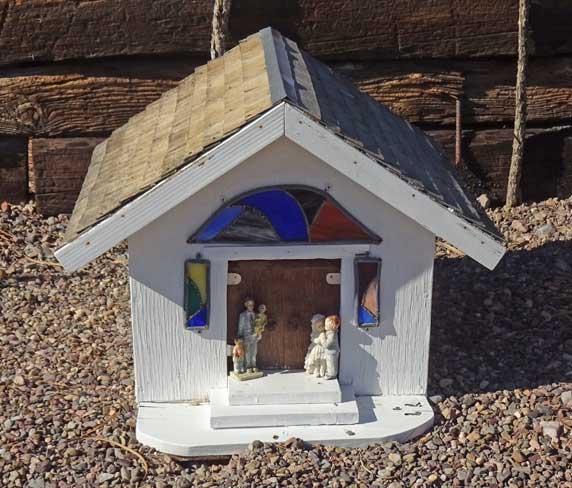 The school house with it outhouses. 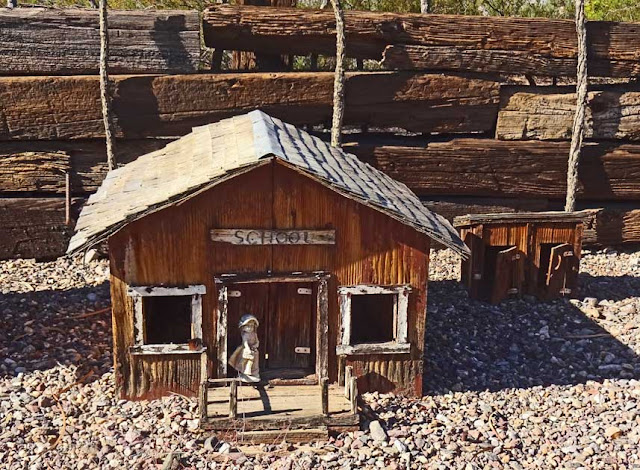 Home again. The RV - Drove Bill nuts until he went out with a bucket and a rag to clean it some. 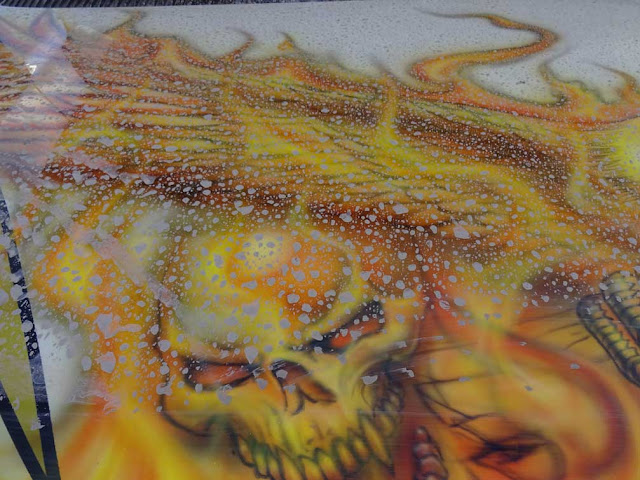 The Dish guy brought the box back and it only got part of the channels we are paying for. So back on the phone with Dish Tech support. Finally got everything up and running. I also wrote a long email to my "friend" at Dish. She responded right away letting me know to keep her informed. By then though she was going home for the day. We've also found out that we have to change channels VERY SLOWLY - giving the satellite dome time to change satellites. Any more trouble and I'm going to take a hammer to it. Another $350 today.
Today we are going hunting in the desert for something special. Hopefully we'll find it and Bill can use his drone.
Posted by Carol and Bill at 7:53 AM

You always mange to find neat things to see in areas we both have been to over and over.