OH! WHERE TO BEGIN?

More bumps in the road. Been an interesting day and a half.
Shall I begin with last night? Sounds good. We decided towards early evening that I didn't want to cook so we'd go out to dinner. Got in the Jeep and off we went. Went to a restaurant we have gone to a lot. Bill ordered a chicken dish and I ordered a turkey and dressing meal. Every thing arrived hot and looking good. Mine was good until I tried to cut into the sliced turkey - turkey jerky! Could not even stick my fork into the edges of it. The inside of the turkey was good, just the 1/2 inch around the edges. So I ignored it and ate the rest of the meal. Bill discovered his chicken was a little dry and the sauce on it was too spicy for him. He left about half of his meal.
When the waitress came to check on us I said to her, "If any one else orders this turkey, tell them you have run out." She gave me a puzzled look and asked, "Why, what is wrong with it?" I told her, "Turkey jerky and tried to stick my fork in the pieces left." Also told her I wasn't complaining just wanted to let them know. Then she noticed Bill hadn't eaten much and asked him why. He told her it was fine just too spicy for him and also the chicken was a little dry. She immediately said she would get the manager.
When they came back to the table, we said we weren't really complaining just wanted them to know the turkey was really hard. The manager was really upset. We told her - don't worry, just wanted you to know. And actually that is the only reason I brought it up. Did not expect anything. After much back and forth she comped our meals. Wish I hadn't said anything. We assured them we'd  be back and weren't upset.
Bill ate when we got home. I'd eaten everything but the edges. And so ended yesterday. Oh, the TV is still working.
This morning we decided to go to Nogales and get the insurance for the RV and car and then go to Mexico to do our paperwork. We've done this a couple of times before and it makes the day we actually leave much easier. We left here at 8:00 and got home about 3:00! Just after we got on the 19 Bill pulled over to wash the windows. It was a beautiful day. 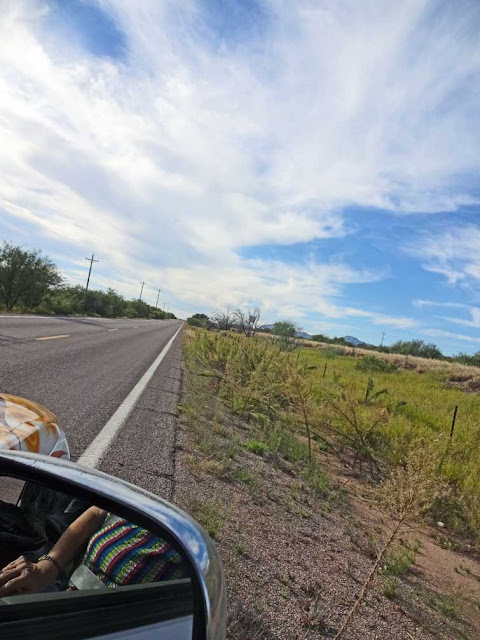 With all the rain in the area there are some new strange looking weeds. 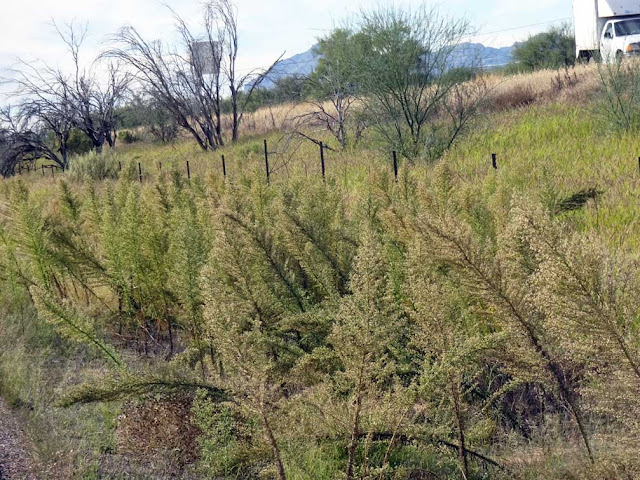 And lots of flowers along the road.

We continued on to Nogales and stopped at the Sanborns Insurance office. This is the same office where we  bought insurance in 1978. And we stayed at the Mi Casa campground  behind it. 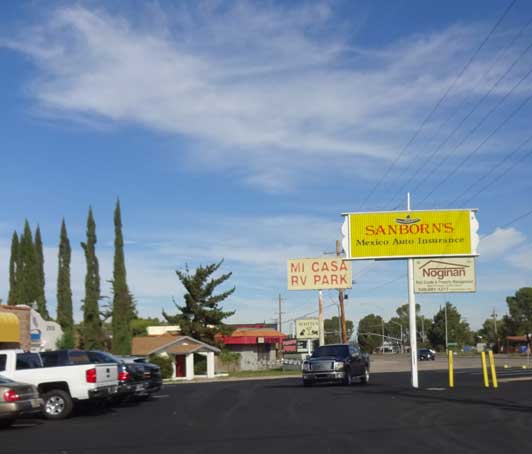 The last few years we've used the other office to get our insurance. There is a very efficient woman there. No problems - in and out in a half hour. Today was a little bit different. I gave the gentleman behind the counter the copies of last year's insurance. All information would remain the same. First his computer wouldn't come awake. Finally it did then he had trouble finding our last year's policies. Found them but couldn't make changes to them. All that should have needed to be done was update the policies for this year. He called the lady in the other office and she walked him through the process. After he hung up he discovered it hadn't worked. Called her again and started over. Finally he finished and printed them out. Well both policies had the wrong state driver's license information wrong and one had the wrong address. Start over again, now computer didn't want to work. Waited. Called lady, got policies brought up the changes refused to be made. Every time he printed them out there was something wrong with them. [last years policies had all the correct information on them. But his computer had information fro a couple years ago, the last time we got our policies at that office.] One hour gone and poor guy was getting more and more frustrated. Finally he said "Why don't you just go over to the other office and she'll do this. I'm so embarrassed. Can I buy you breakfast or something." We told him it was okay, we'd go over to the other office and don't worry about it. And that is what we did. Got out of there in 20 minutes with all correct paperwork. We are getting really good at just going with the flow.
Then we headed towards the border. Just rolled through the US side. When we go with the RV we go through the truck lanes. Into Mexico. Stay out of the Importacion lanes. 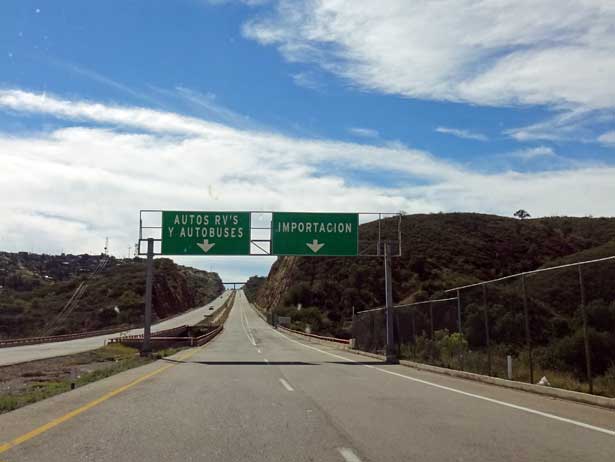 First thing was a toll booth. 61 Pesos for the car - about US$3.
After that came the Mexican Aduana - customs office. Have to be sure to stay in the very center lane. 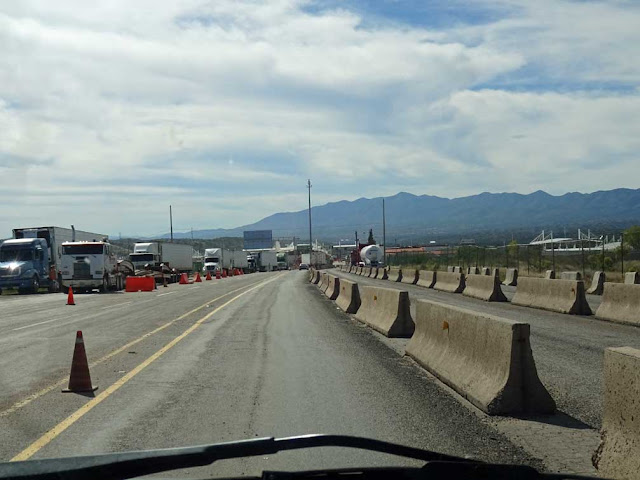 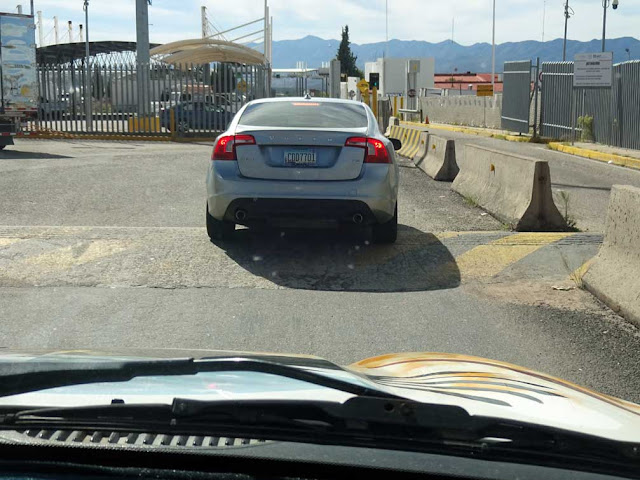 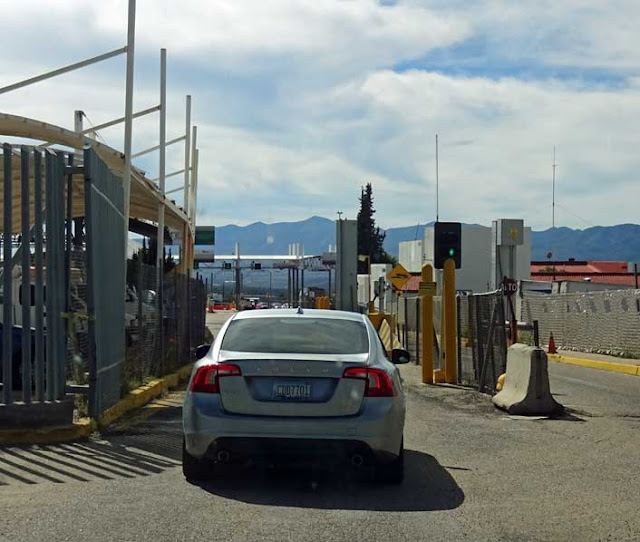 First two left lanes for cars. Green light keep going, red light you get stopped. Fourth lane to left of bus is for RVs. DO NOT try to take an RV through the car lanes. There are sharp left and right turns after it. The RV lane goes straight back to the highway.

We got a green light and were on our way to Kilometer 21. Almost right away we were into construction. 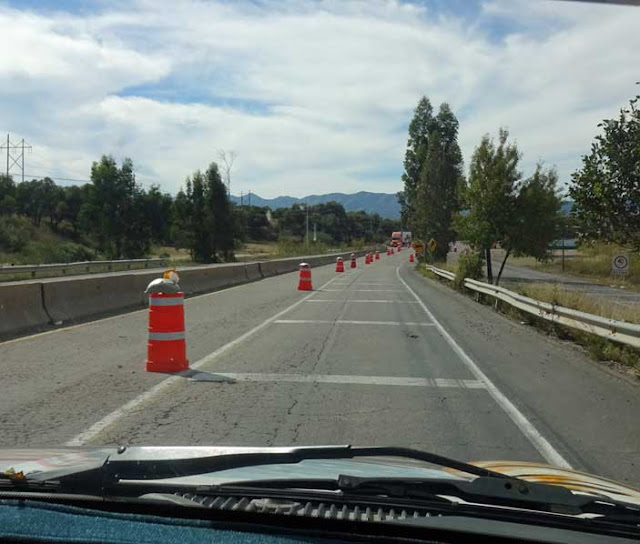 All traffic directed to southbound lanes. But nice new concrete to drive on. 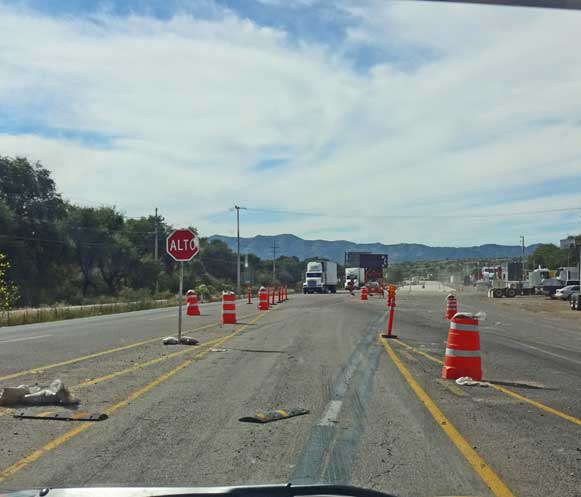 Looks like the northbound lanes are almost ready for traffic. 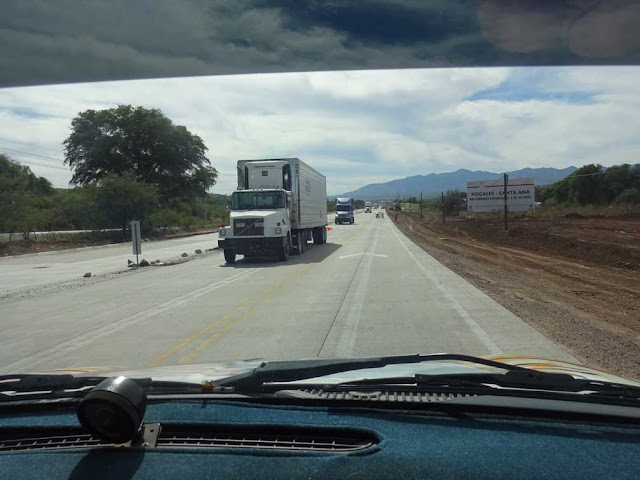 Watch for the blue sign for the parking lot to get the paper work done. Not too many cars in the lot. By now it was a lot later than we figured on. We were the only ones in the office filling out the paperwork for the tourist cards. 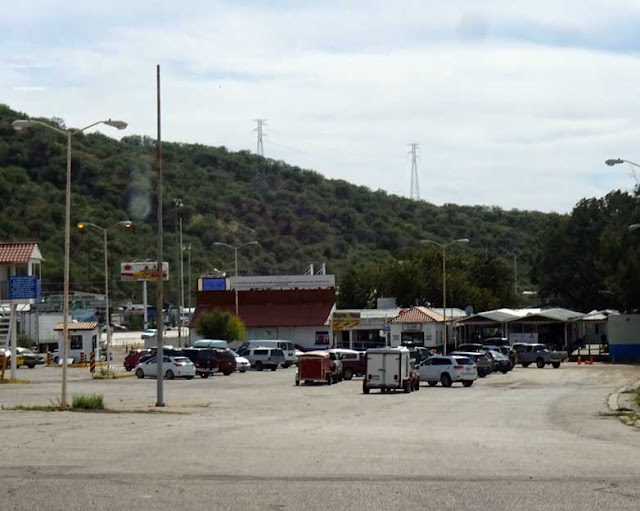 Oh, everyone was in line at the banjercito. But there were several windows open so it moved fast. 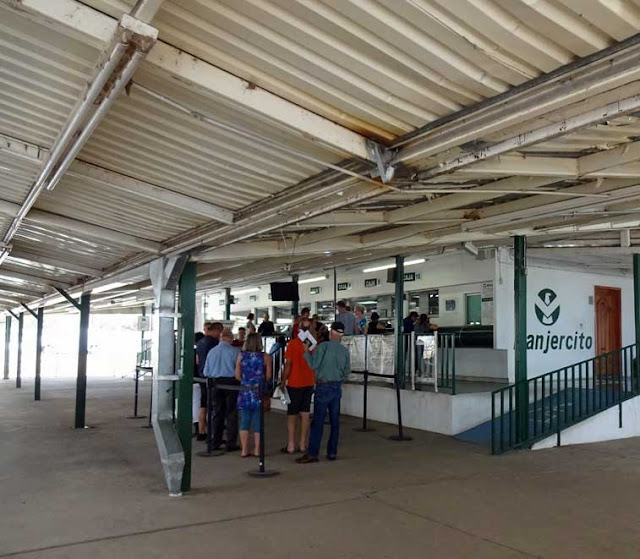 From the time we parked until we got back in the car was less than an hour. And I think we were the only ones who had all the paper work we needed. Seems like everyone in front of us had to go back either to their vehicle or the copy booth for something. Tourist cards were US$27.60 each. Permit for the 2005 Jeep was US$375.11. We have a 10 year permit for the RV already.
Back into the car and headed north. Hadn't gone too far when we saw a car headed south in our northbound lanes. It was flashing its lights and traveling down the shoulder. Hum...just Mexico I guess. Then we saw the trucks. Both northbound lanes were full of stopped trucks. Crap. Bill said way in front of us he could see a semi and stuff across the lanes and into the center. Not going any where soon. Now we know why the car was going the other way. Bill made a U-turn and now we were going the wrong way. We came to a bus that was backing down the highway. And a semi that made a u-turn and headed south. We came to an on-ramp and took it off. When we got up it we had a decision right or left. Right took us further south, Left took us east on a nice two lane highway.
Luckily I'd downloaded mapsme app on my phone. So figured out where we were. We were on the Periferico Oriente??? See it there to the right. We should have been on the MEX15D. Notice the periferico just kind of ends in the middle of no where. 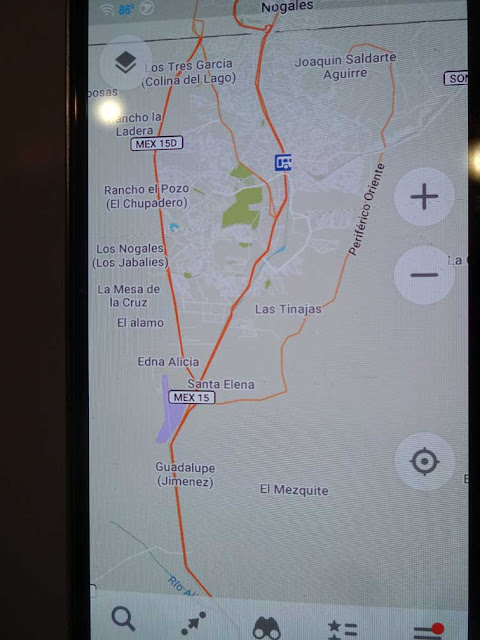 And the rest of the day just got stranger. Tired now. will finish tomorrow.