And the day continued.

Good morning it is a wonderful day here in Amado, AZ. Positive thinking on my park.
So where did I leave off - of yes - with our little trip into the unknown. Here is the map from the phone again. I know it is a little blurry but hang in there with me. The A on the 15D is where the accident was, no way off there. The top arrow shows the International border. The X on the bottom is where we ended up getting off the main highway after driving back it going the wrong way against traffic. If not for the truck accident we would have stayed on the 15D the highway on the far left. The connection to the highway in the middle with the E on it was south of where we got off [doesn't look like it here but trust me it was and we wanted off asap.] Not fun going against semi traffic. The circle looked to me like a good road to get off on. But we never got that far. 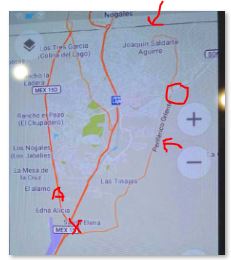 And we are off, looked like an okay road and we were headed north east. I thought we'd go to where the circle on the map is and get off there. Looked like a major street. Didn't see any traffic while on the road. There were several small rock slides but they been somewhat cleared up. 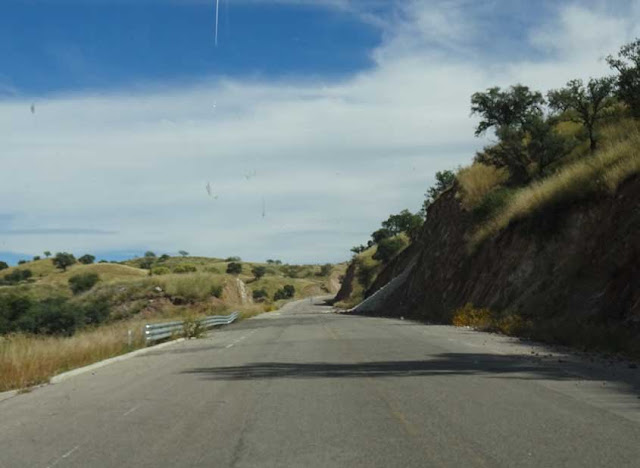 Still no traffic. We did finally see a on and off ramp but went past it. Then the road started to have more debris on it. 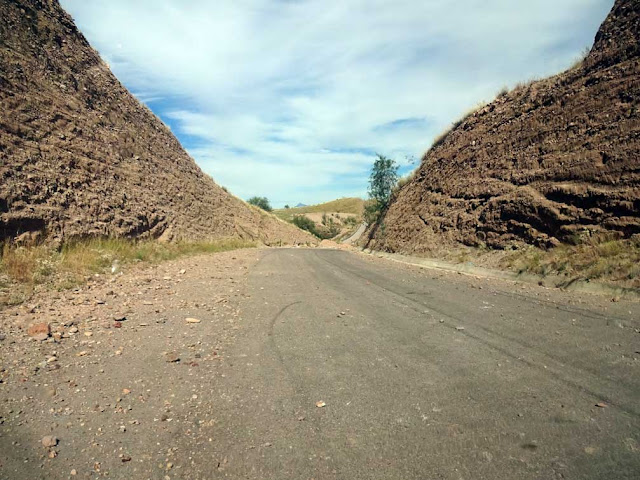 Oh, oh, road closed by big rock slide. Turn around Not even near the road I thought we could take where the circle is. So another U-turn and slowly going back looking for the off ramp. It barely shows on the map but... 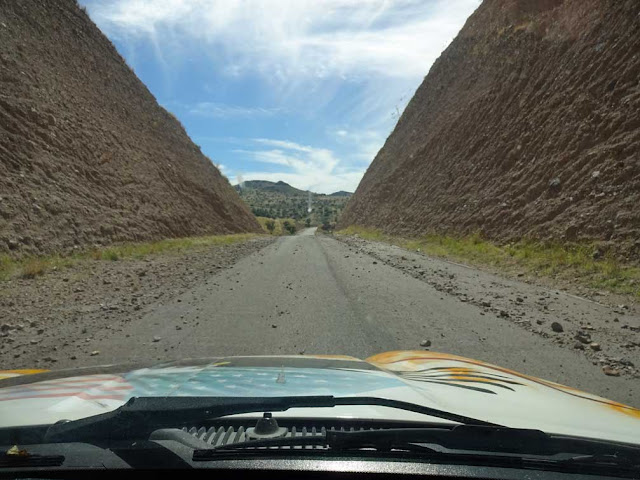 We found it and got off heading west, just deserted road for a ways with some rocks narrowing it down to one lane in places. Suddenly we were in part of the city. A part with three different schools that were letting out. Talk about traffic. Cars double and triple parked waiting for their kids. And kids running every where. 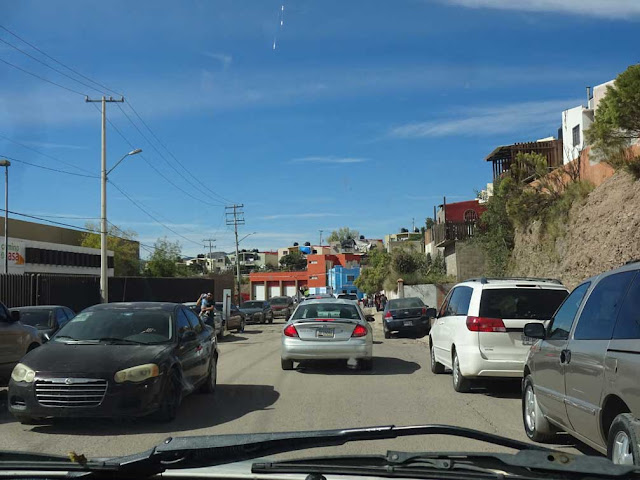 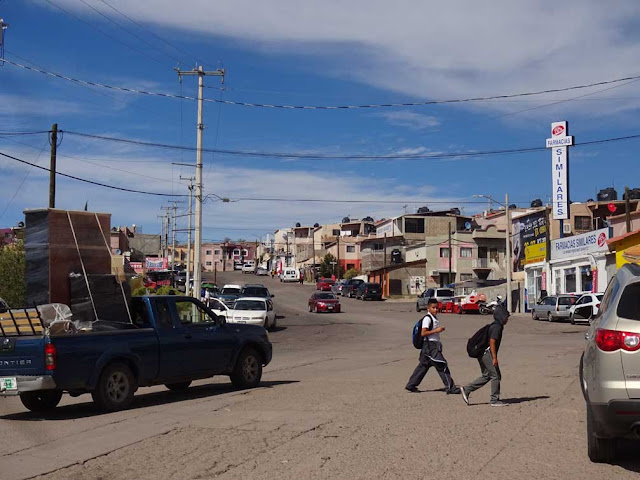 And pot holes big enough to eat a small car. But by then we were starting to go north. 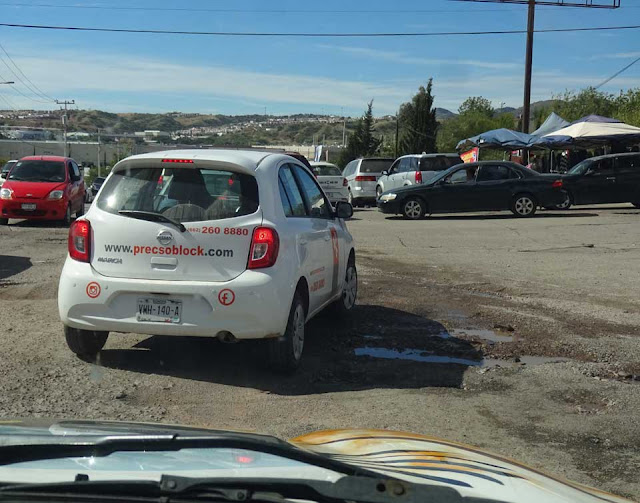 YES! YES! YES! A sign with U.S.A. We had stopped to ask a man directions - The only word I understood was derecha [keep to the right]. Bill asked me, "Did you get that?" "No, the only thing I understood was 'right'. Didn't you get it?" "Nope." So on we went and got lucky. Lots and lots of traffic. 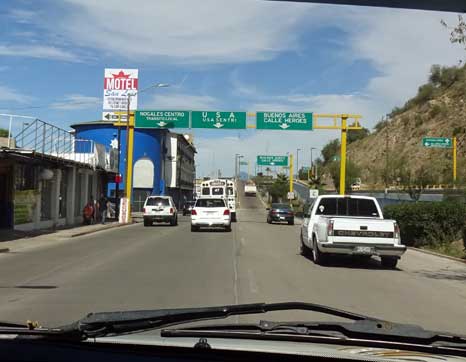 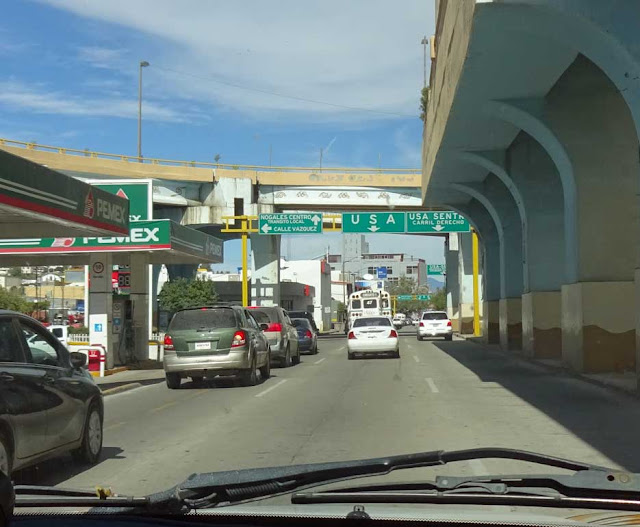 And then we were in line waiting to get to the border. Lots of vendors selling things. Want a big cup of fresh fruit - no problem. 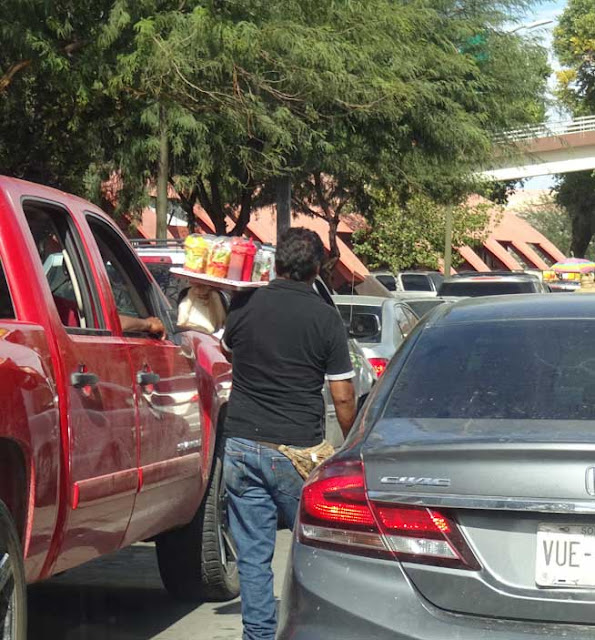 Or how about a hobby horse? Or tamales or rolls. And all kinds of snacks. 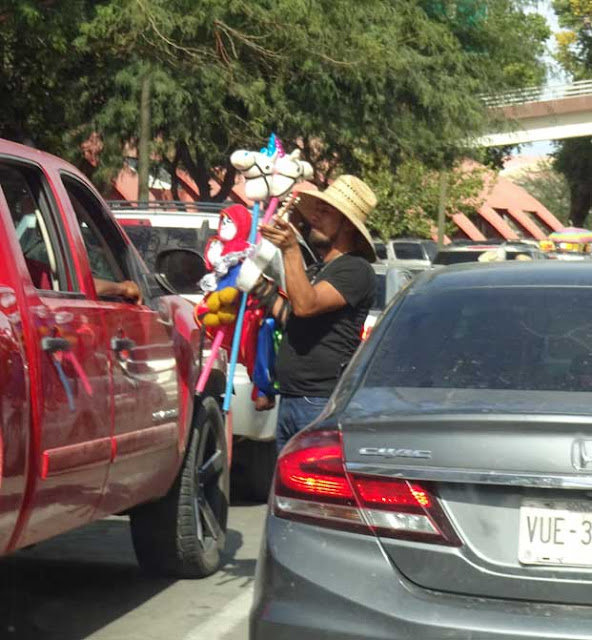 Getting close. Didn't take as long as I thought it would. 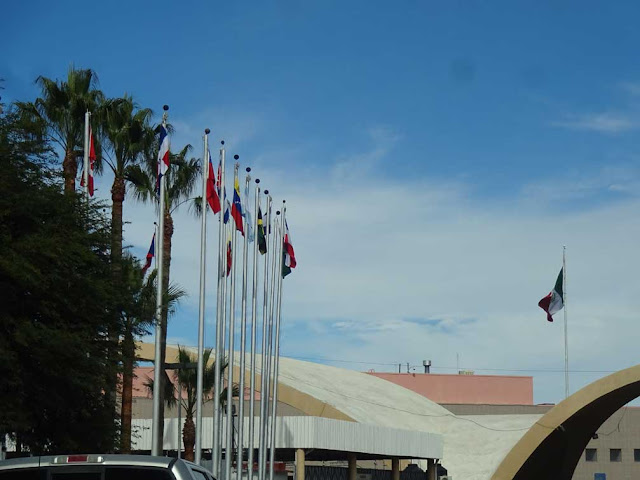 We went through this arch 40 years ago on our trip to South America. This was the only way then right through town. Thank goodness there is another route now. 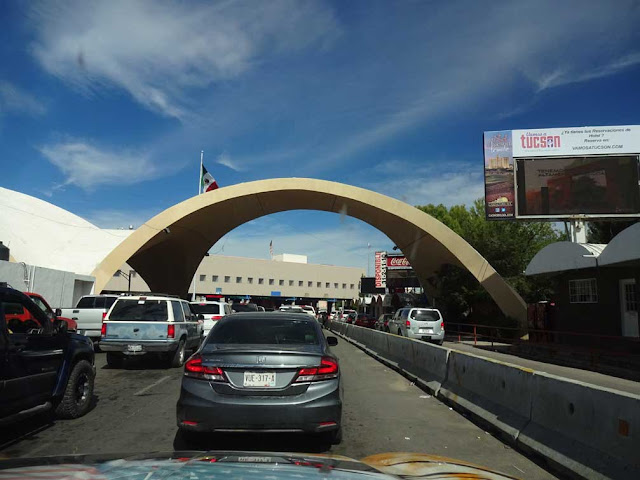 Only a few cars from the US. Big sign out NO CAMERAS or CELL PHONES so didn't take any more photos. Just as we arrived at the front of the line the border guard walked out of his hut and put a cone in the middle of the aisle. Luckily we could also go to the right lane. No problems getting through. 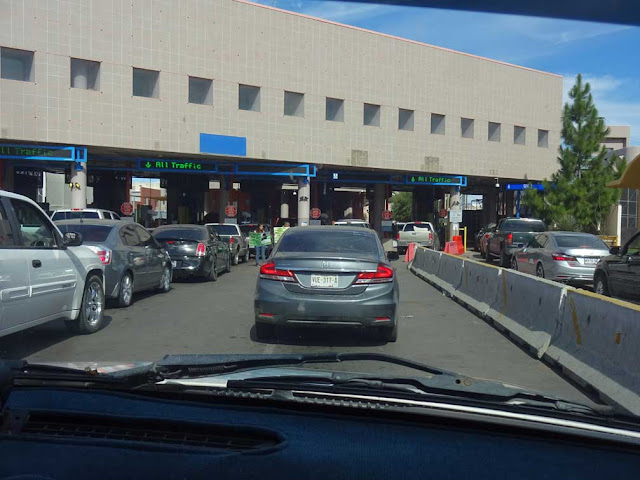 Sitting there we were right next to part of The Wall that goes right through Nogales. 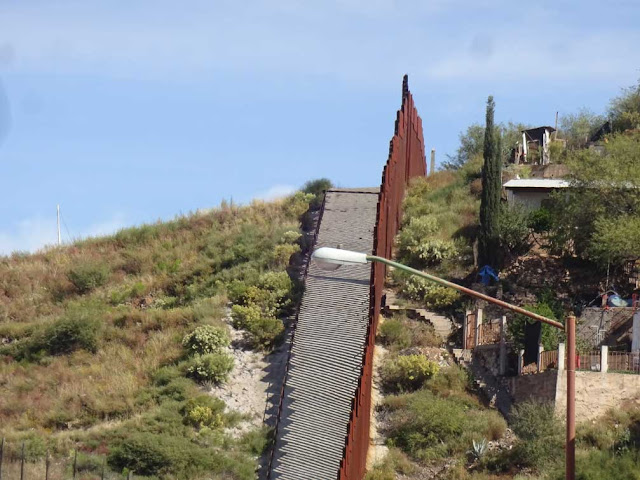 Okay, we got our passports back and proceeded across the border, there were two lanes leading out, divided by a plastic barrier. Wouldn't you know we took the WRONG one. We ended up in the line to be scanned and searched! CRAP. We stopped behind the car waiting to go through the scanner. To our right was a search station that was empty and we could continue on out to the highway. We discussed it and decided to stay put. Five minutes later Bill turned right to the way out. Didn't get far. Two border patrol guys quickly approached us. "Stop your car, turn off your engine and wait." Bill didn't get the engine off quick enough. Head in the window, "TURN OFF YOUR ENGINE NOW." okay. And then they walked away. Now what? We sat there and sat there and sat there. Bill was about to make a break for it when the border patrol officer came back. He said, "Okay, start your engine, I'm stopping traffic behind you, back up and get in line for the scanner. Once you are in this area you have to go through the scanner." So we did. Sure glad Bill had taken all the drones and metal carriers out of the car. We were finally waved through the scanner - 2 miles an hour and better not go faster. When we reached the border patrol guard she smiled at us and said, "Did you get lost? I saw you turn in here and knew you weren't supposed to. But once you are in this lane you have to go through the scanner." At least we didn't have to pull over to be searched. She radioed the soldier at the gate and told him to let us through. Phew finally. What an adventure. Looking forward to getting back to RV. But first we stopped in Nogales at a Denny's to eat, we were starving.
We only had about 23 miles to go. About 1/3 of the way back to the RV the Jeep - coughed and stuttered but kept going. Hum..."Was that you or the Jeep?" I asked Bill. He was studying the dash lights.
"The Jeep."  We kept going, he sped up a little. More jerking and engine light came on. Ducky! We went through last border check on Highway 19 and took our turn off. Kept going past RV park and to the mechanic a few blocks away. 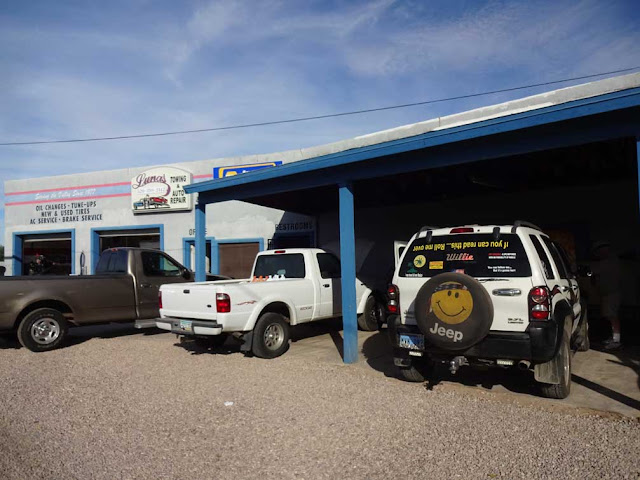 Mechanic came out with computer tester and something showed right up. I forget what it was, but he asked us if we'd had mice chewing on our wiring. So he brought us home and took Jeep back with him.
But there was a pretty sunset. 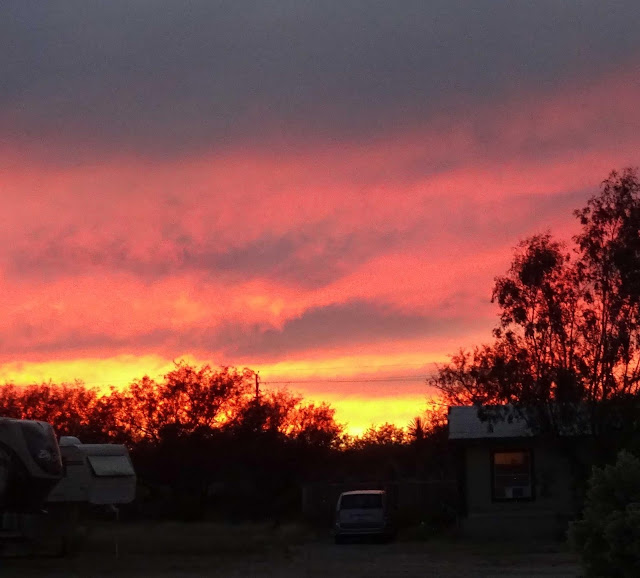 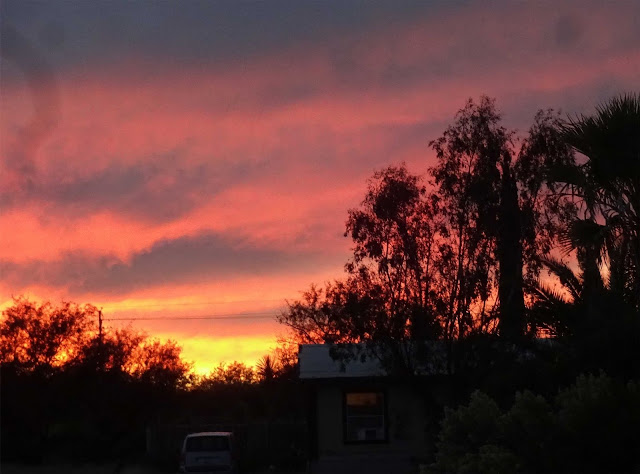 So now we are waiting for the mechanic's call and the RV mechanic to come tomorrow. Bill still hoping to cross the 1st.
This is a be careful what you wish for kind of day. I want some peace and quiet - sure getting it today. Just sitting here waiting.
Posted by Carol and Bill at 1:41 PM

Well that was not a very good day. Fingers crossed that it is something small with Willie

Willie is fixed a new crank sensor only 159 dollars. could have been worse. At least TV is working.
And now Willie has all his power again. Hang on to that sissy bar!