Got out walking again so nice that the mornings are cool. So cool in fact I'll be putting the electric blanket back on the bed today. No, not for me but...Today was a perfect weather day, slight breeze low 80's, blue sky with puffy white clouds. If only it could stay like that. By Sunday our HIGH will be 75, yes! But then it is warming up a little again.
Saw these in a yard on my walk. Might be a fun project to do next year. All through with projects this year. 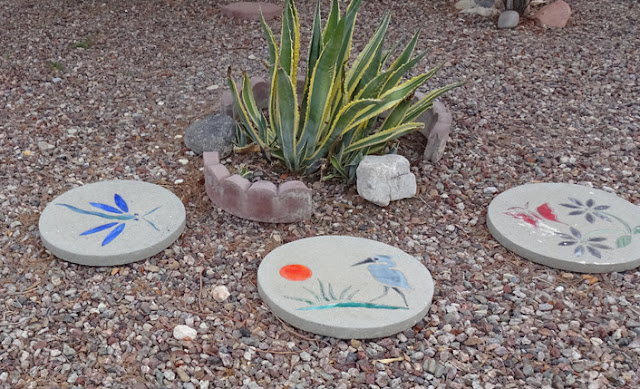 Also a kind of nice sunrise yesterday morning, nothing this morning. 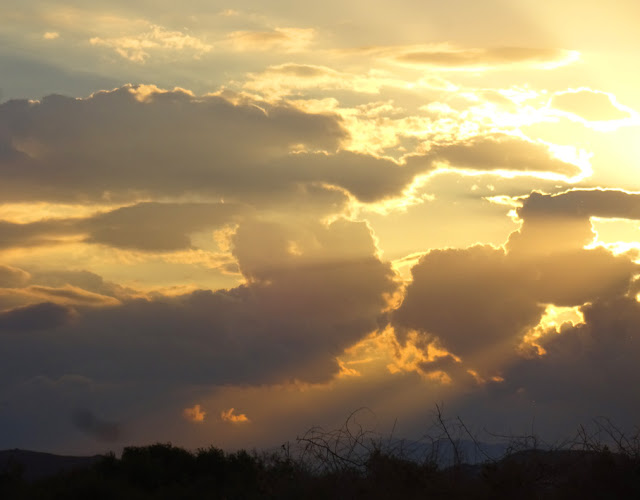 So anyway - yesterday we got the two Wallys - the receivers for the Dish TV in the RV. After much searching found someone who would set up dome and install the receivers. According to the person I spoke to at Dish when I ordered the Wallys to the tune of $119 EACH we would be able to install both of them in the RV and be able to watch different channels at the same time. Good that is what we had with Direct - more on that later. Called the installer this morning and he had just received a cancellation, would we like them to come right over. Of course!
We rushed up the street to get the RV and bring it home, luckily it is only two blocks away. Got it parked and hooked up and the installation truck came around the corner. Wow service! From there it kind of went downhill. Settings on dome were changed with no problem. Receiver was set up in living area no problem. Now Problem. With the dome we have [when talking to Dish TV I told them which satellite dome we had] not only couldn't we watch a different channel on the back box, but most of the time it wouldn't work anyway because of Dish using 3 different satellites...They would install it but we would be throwing our money away. UNLESS, and he didn't recommend it, we got a wifi set up for an additional $299!!!! then we could watch the same channel in the back as was on in the livingroom. OR we could buy a regular satellite dish for the second box - then we could watch something different on each TV. No thanks. So the one box is working and I called Dish and told them I wanted to return the other box and wanted a refund. No problem, in fact I called about four hours ago and already have had two responses and the info I need to return the box at no cost to me. More on that later.
I also received a call from Dish because I filled out a very unsatisfied customer survey because of an earlier misrepresentation. And because I didn't answer the phone, we were in a restaurant I got a very nice e-mail requesting me to contact them to discuss my problem. They will probably wish they never contacted me cause now I have a 2nd cause to complain about. And complain I will do. It cost me $32 to mail the unwanted receiver back to Dish!!!
Tonight is the first game of the season for our hockey team. I hope it is sold out so it isn't blacked out here. (I wrote most of this a day or so ago - the hockey team has since lost 2 games in a row. And discovered I could watch the games on an alternate channel if they aren't broadcast on the regular channels.)
Bill is still feeling good, gets more strength and normalcy back every day.
While the RV was out front he washed part of it - and loaded a lot of the stuff that goes in the basement compartments. Then we went to lunch and grocery shopping. Last week he couldn't have even gone to lunch.
Tomorrow another challenge with the prescriptions and the insurance company. We need a six month supply. Some years no problem, some years lots of problems.

Flew home yesterday and this morning its 32F and sunny! Easier to dress warm than sit inside the RV with the A/C running. Phoenix was hot and steamy after all the rain.

humidity in the desert is the worse we are so used to it being dry. Bill freezes if it gets below 82. I cook if it gets above. See you soon.