Seems like we've been so busy lately. Doing what I don't know. But I sure have a lot of pictures to sort through. Driving along the Malecon the other day we passed this pile of boxes. Trash? Waiting to be picked up by someone? A truck broke down and unloaded? Who knows. 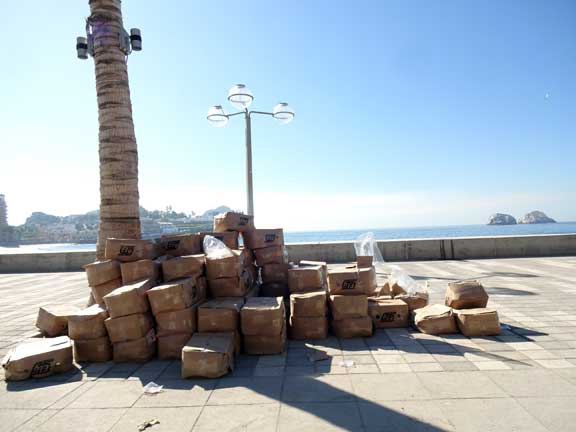 We did stop at the new park just past the fishermen. For years it was a big empty cluttered field full of trash and a couple of crumbling buildings. They started working on it last spring. Sure turned out nice. Great place for families, picnics, play grounds and one night when we went by there was a concert going on there.

Two of these areas for water play. 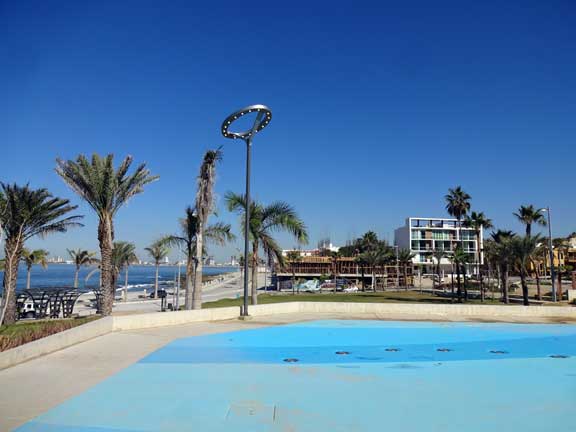 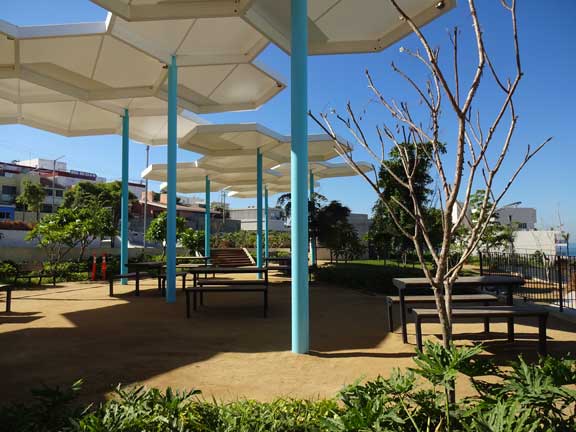 Sand to play in.  Beautiful views of the ocean. 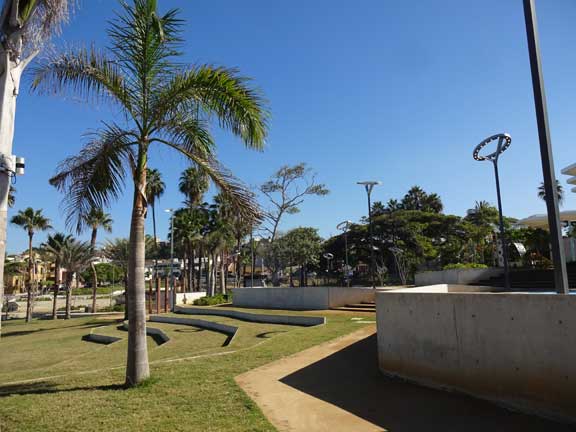 It turned out really nice. 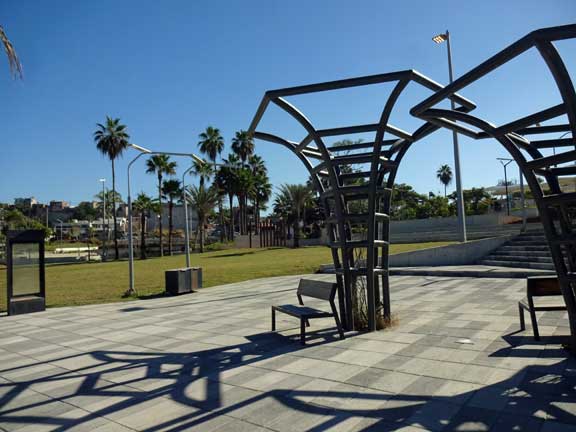 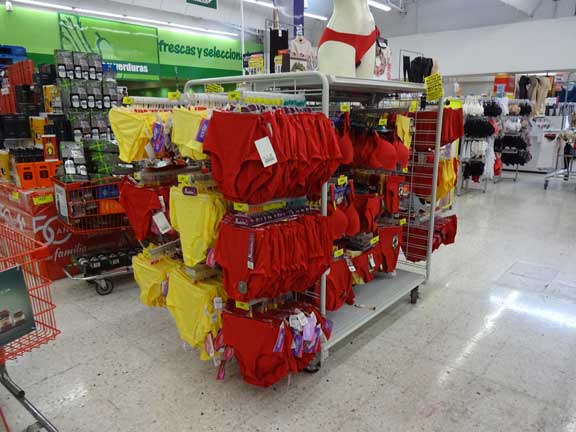 There were two cruise ships in on Tuesday so went to Lucky B's in the Golden Zone for breakfast and a little people watching. The car belongs to the owner of the restaurant. I was very surprised we found parking, let alone right in front of the restaurant. 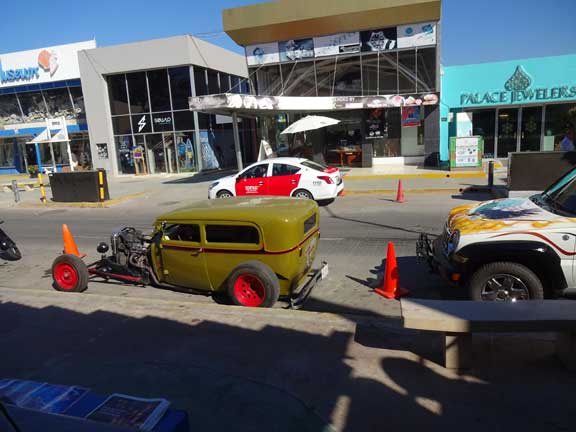 A good way to spend some time. Food is very good. 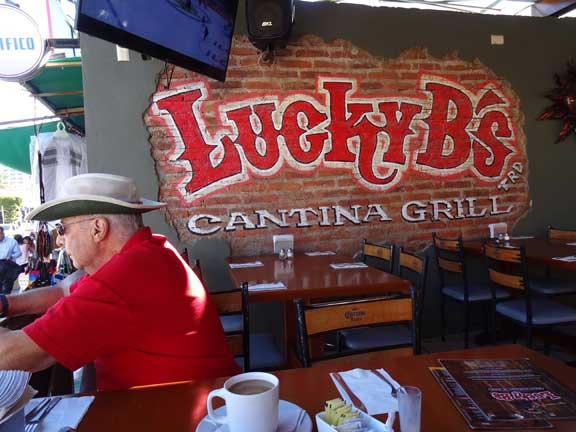 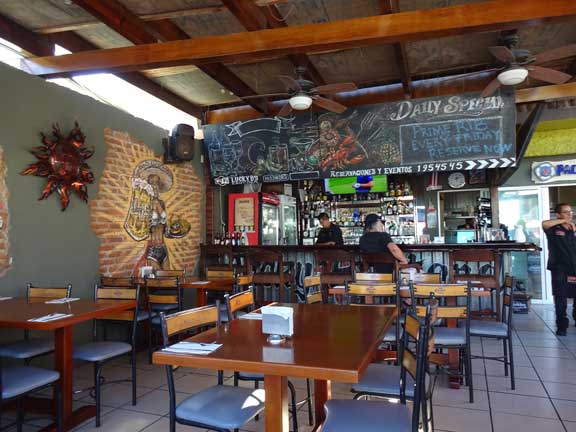 Here they come. Unloading the big tourist buses and taxis. 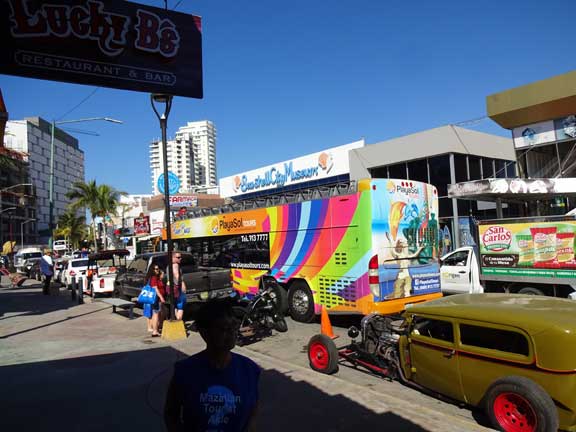 A rather young vendor. He was selling woven bracelets. 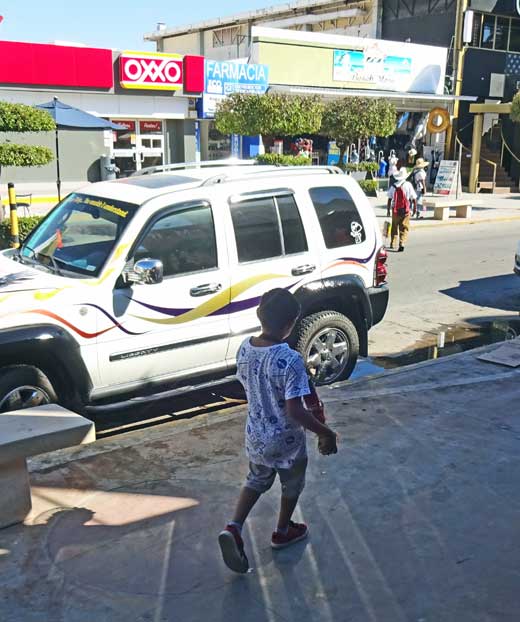 Heading to Pancho's to set up their xylophone. 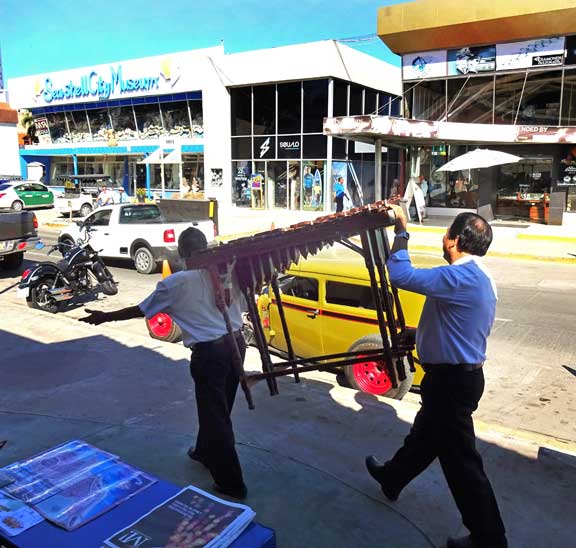 A bucket of white Calla Lillies, wonder how many he sells in a day? 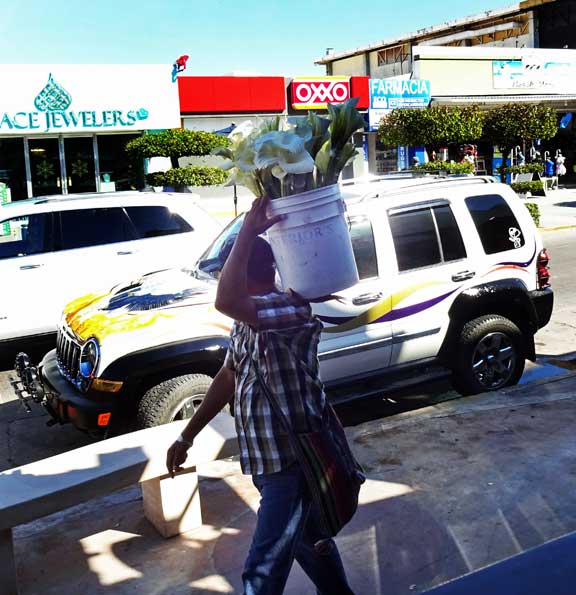 A lot of the Pulmonia have been refurbished in the last couple of years. This one just dropped off people at the jewelry store across the street. What is a Pulmonia you ask? Well a Pulmonia taxi is an open-air golf cart like car that takes both tourists and locals around town. They are fun to ride in - but not so much if it is cold out. Pulmonia means pneumonia in Spanish. As in "If you ride in one you'll get pneumonia." 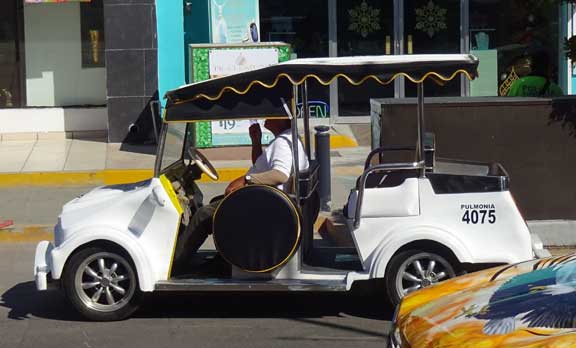 There is even a statue of one on the Malecon. I found a great article about who invented them and how they got started. Only problem is it is in Spanish. I used Bing Translator to translate it. Some of it came out kind of weird but it is still interesting. If you want to read it click here. Some pictures of the original ones. 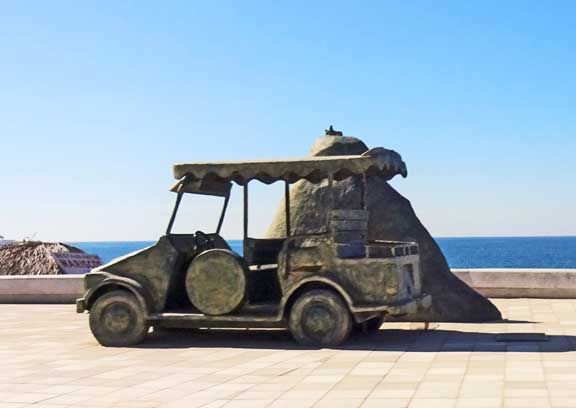 Now this is not a Pulmonia it is a Safari - and don't get them mixed up. The Pulmonia drivers are very proud of their rides. In fact there is a different union for each of them.

A Safari is a new model of the Nissan brand, Tida - with no windows and with doors and seat belts for the comfort and safety of the users. So there! Personally I like the Pulmonias better. 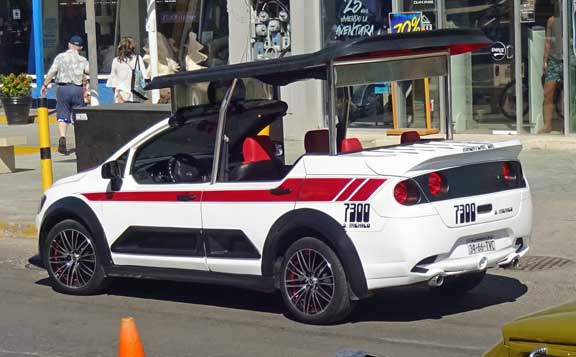 Next time we are down here we'll have to get a picture to send home. 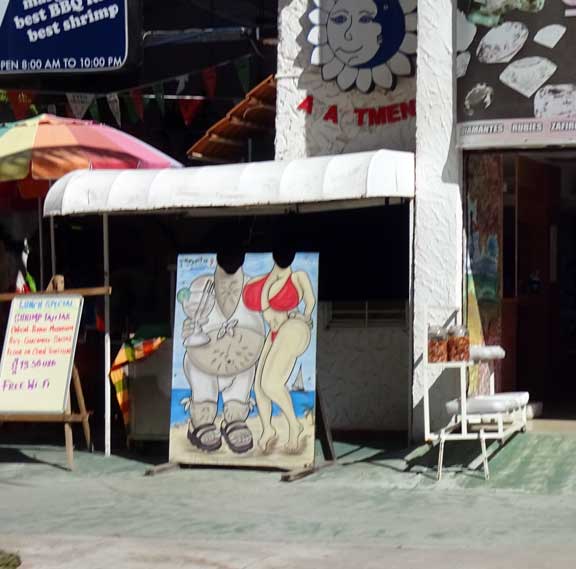 After eating we headed towards Centro to check things out. Better then going home and doing nothing. Some of the palm trees have been replaced AGAIN. Hope these manage to live. 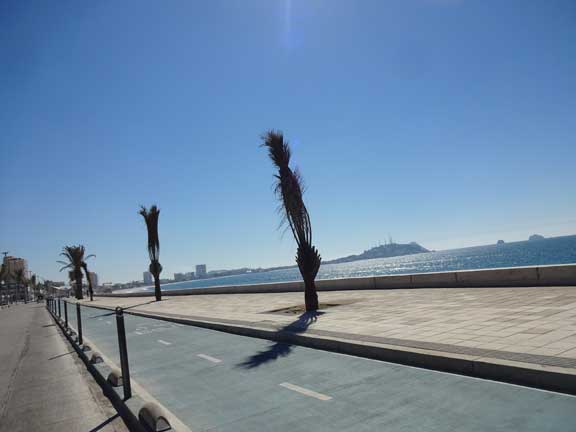 Last year when they were putting these sun shades up we were wondering if they would with stand the winds. Guess they did. Kind of pretty in a nautical way. 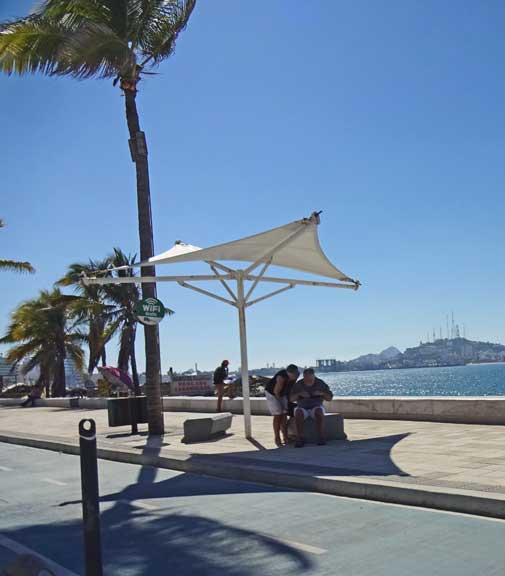 Wonder what he is surveying? Not another project I hope Everything is looking so nice now. 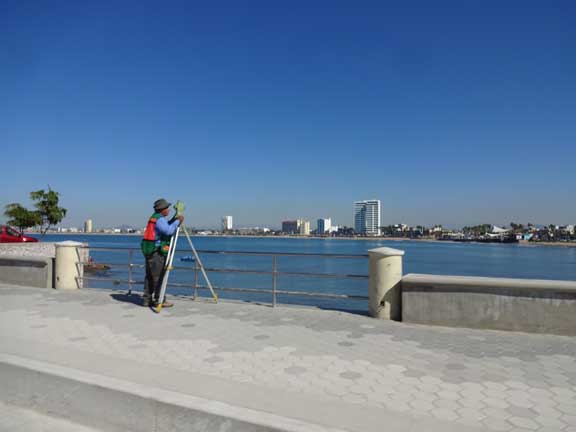 By the divers they are still working on getting the sidewalks installed. 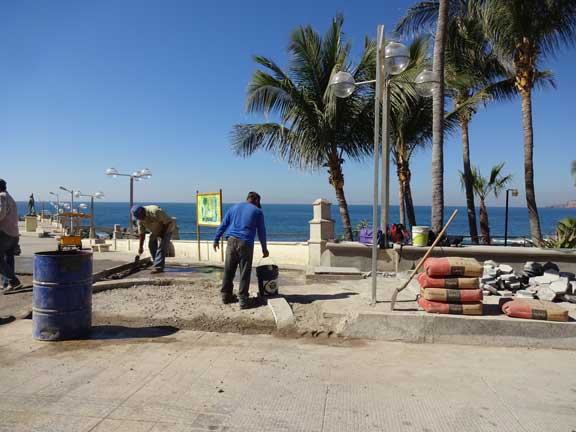 We stopped here because when the cruise ships are in the divers are busy. Sure enough a couple of them were getting ready to go up. 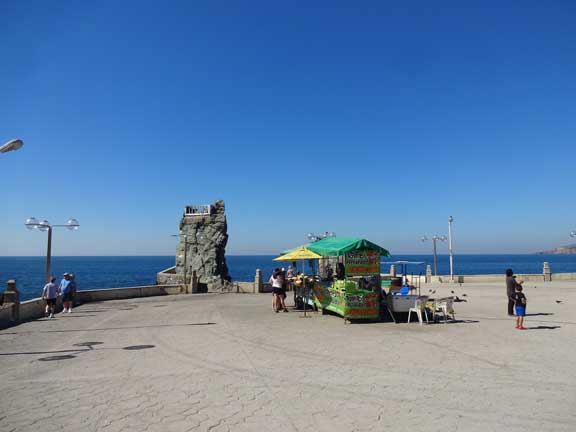 A tidbit about the divers. "Mazatlan cliff diving has been something for daring boys and young men to do for generations, but it has only become a popular spectator sport for visitors since the early 1960s. As a bet with a friend, Mario Gonzales Aguilar began the tradition of leaping off a stone platform that is 45 feet high into a small area of water (less than 45 square feet) in depths sometimes a low as only five feet. This young man continued to make the dangerous leap well into his 60s."
Up they go. Not taking the stairs, climbing the rocks is more dramatic. 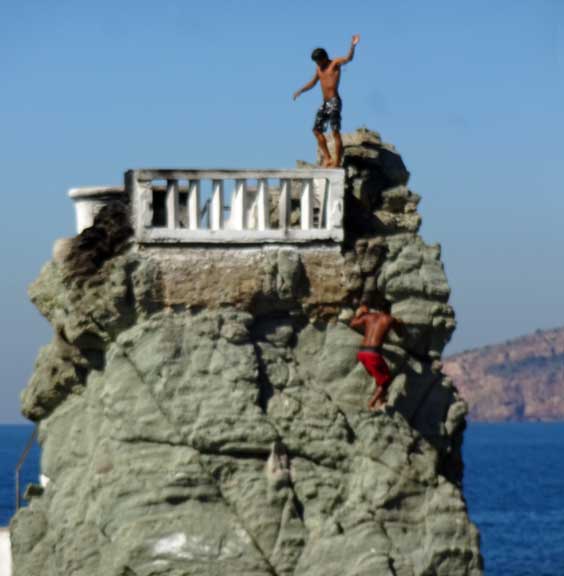 Getting ready to leap. 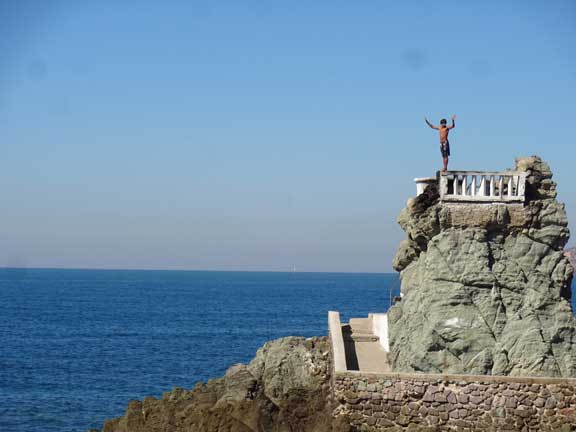 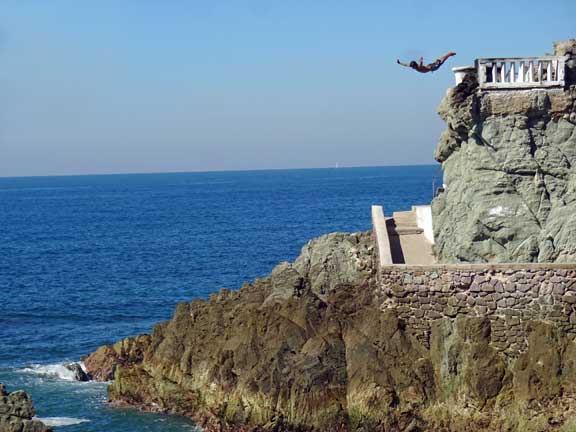 Just before he hit the water. Neither of us got him touching the water. 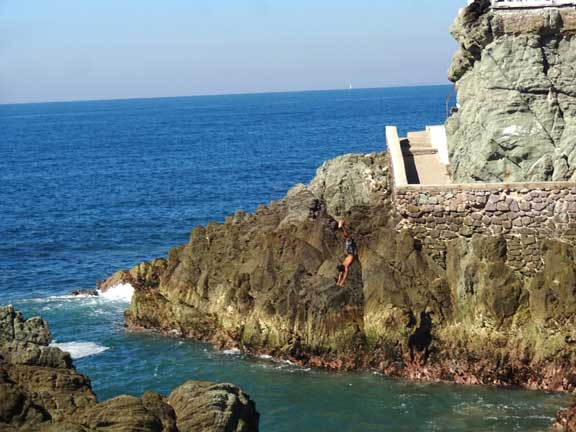 I took this using the zoom, never thinking about the fact I couldn't see the water. Maybe we need to get a new photographer.

Will stop for now I've taken about 300 pictures in the last couple of days so have to do some sorting. Also there is a lot of drone footage to review.

have you tried their Paradise salad? Very good different fruits and nuts in it.