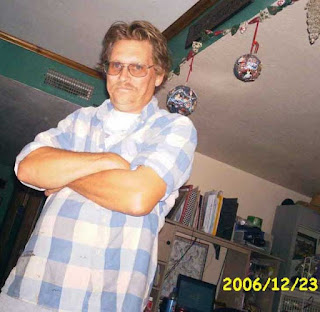 He wished no one a last farewell,
nor even said goodbye. He was gone before we knew it,
And only God knows why.
They say time heals all sorrow,
And helps us to forget,
But time so far only proves


How much we miss him yet
God gives us strength to face it,
And courage to bear the blow.
But what it meant to
“love” and lose him
No one will ever know.

Kind of coolish at home in Vegas. I hope most of our plants at home live through the freeze. 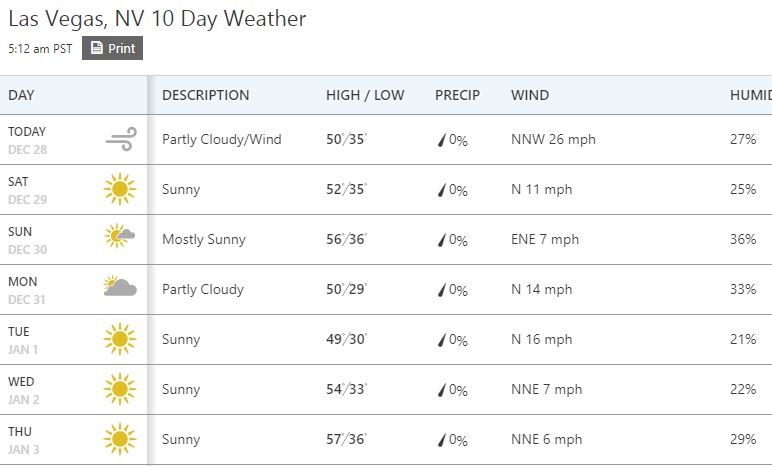 And much cooler than usual here in Mazatlan.  Bill is for sure not going to enjoy Sunday. Getting closer to normal again by the 4th. 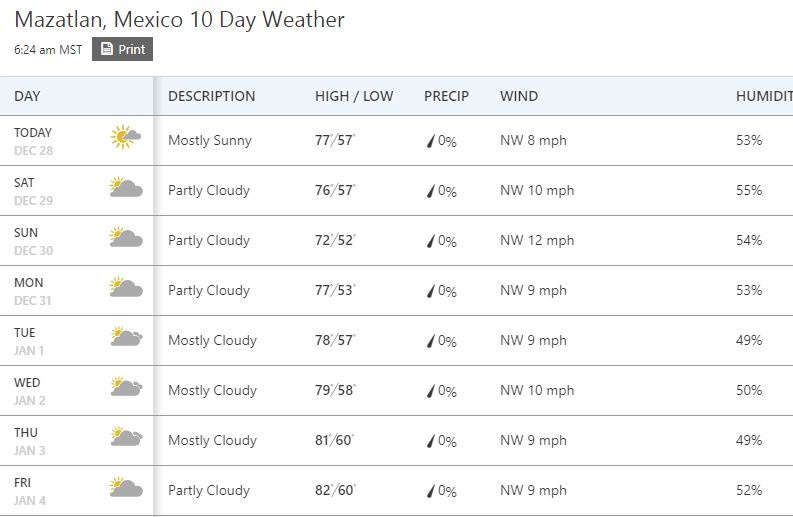 We have pretty much been staying home, both of us congested. Thought it was a cold but now think it is all the dust and diesel in the air. We both feel better when we get away from here. We keep hoping the area right next to us gets leveled soon. I think when all the machines are working behind us it will might be tolerable. But we'll see. It is 7:00 and some of the big machines are starting up already. They continue working until about 6:30 at night. Hopefully they will leave Saturday afternoon and not start back up until the 2nd. That would be nice.
Went outside yesterday morning and almost stepped on him. We both jumped. First jack rabbit I've seen around here. 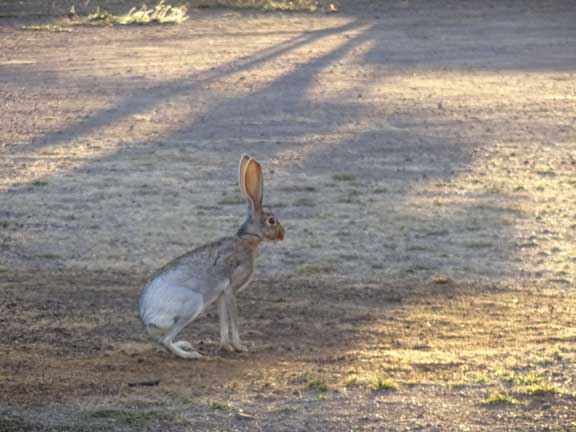 And the Chakalakas are hanging around in the park more now. No where else for them to go anymore. 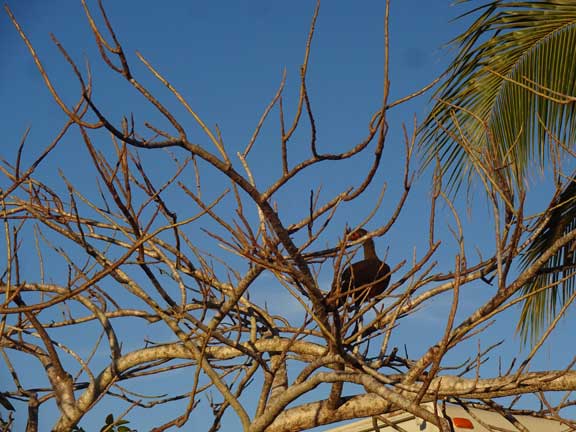 Standing on our patio taking a panoramic shot of the north side retaining wall they have build. You can see we are only four empty spots from it. The next picture is of the dumped dirt behind the wall in the are that is just to the left of this little tree.

A lot of dump trucks to bring in all this dirt. The piles are four deep and run  the length of the wall. 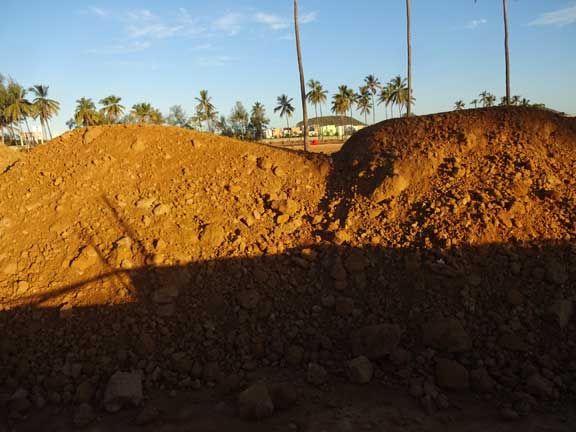 Looking over the wall. The ground level has already been raised about three feet. The dirt will eventually reach the top of the wall. One of those wires running along there is our Internet wire. Keep fingers crossed every day it isn't cut again.  [I am now writing this part Saturday morning - waiting for the graders to start working on leveling this, then the loud machines that pack it down. We were gone most of yesterday.] 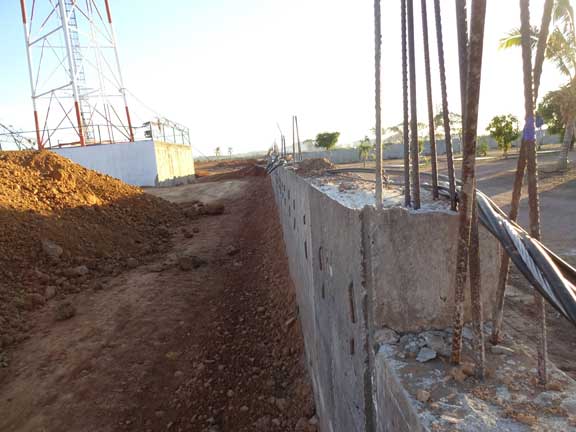 Looking north, the tractor is right next to the wall but behind him you can see the beginning of the construction of the homes. Or as they are called here "pigeon holes." 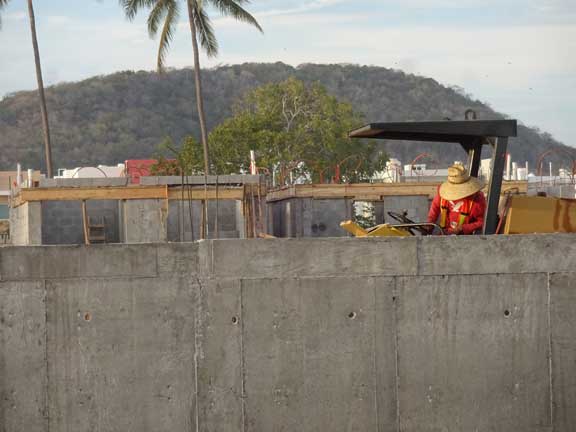 Dumping another pile of dirt. Luckily they have several water trucks running all day, trying to keep the dust down. But can't do anything about the diesel exhaust. This is the north wall. 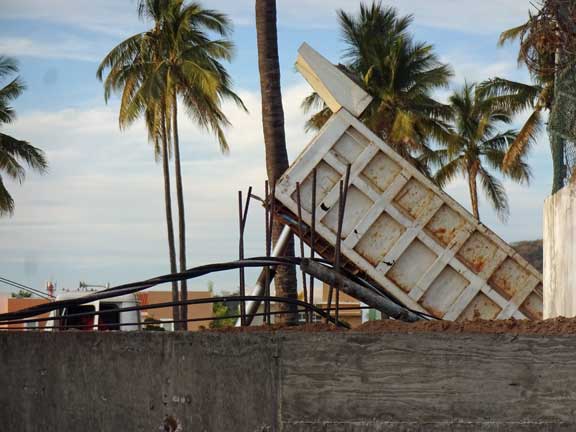 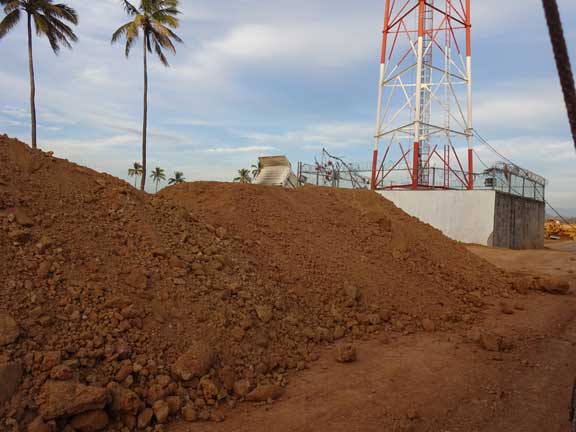 This is looking behind us over the east wall. 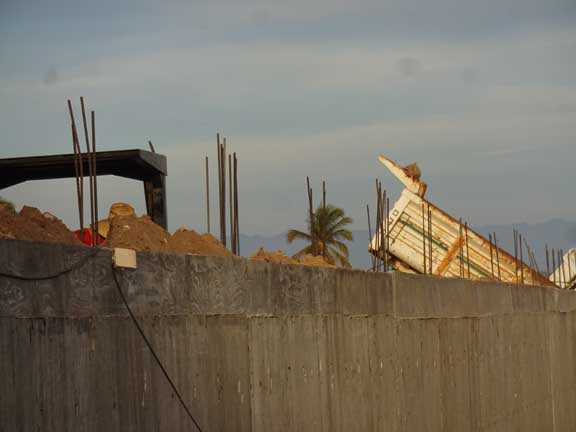 Three of our friends are leaving here when their rent becomes due for January. Some going further south, some going north.
I'm hoping the noise and dirt will be behind us and not so bad by the time we have to make a decision.
Yesterday, Friday, we spent most of the day away from the RV. Took a really neat day trip with friends.

It is now 2:00 Saturday afternoon. All is quiet next door. Hope they have gone home and not just at lunch. And hope they don't come back until Wednesday the 2nd. Cloudy and overcast and cooler than usual today but we did take a little trip this morning.

Carol and Bill, so sorry about the loss of your dear son. The pain never really goes away but the only thing that consoles this is all of our happy memories of the person we love.

So sorry that you have suffered the loss of your son. A parent never fully adapts to that loss, and it will always hurt. Hugs to you both. He was one handsome guy.

It is so special that you honor the memory of John each year.

FYI many from Las Jaibas have moved here to the Tres Amigo RV Parks due to the construction. I wonder how much longer your park will be around. Likely it has already been sold.

Carol and Bill - I see the same sparkle in his eyes that you both have. Hugs to you both.

We are watching with "sad" interest to see how things go at Las Jaibas. I know we would not have done well with all the construction. Especially the 7 am start. You know how we like to sleep in!!!

We are sorry for your loss - must always be a sadness in your heart especially on this day.

Extremely sad for the displaced wildlife that lived in the woods on three sides of the RV Park. Poor little Jack rabbit.
SandyM

They claim it will still be open next winter. By then it will be surrounded by homes. Time will tell I guess. So many here in the town have already been closed.
It is hard to lose a child.

At least we're getting a couple of days with out the noise and will be ready to get out and about by Wednesday when they come back. It should be warmer then too.

We are for sure seeing more iguanas, someone said they saw some squirrels! Didn't know there were squirrels here. Wonder where the deer went.