Grabbed all our captured tourists - Mark, John  and Jackie and went to El Quelite for breakfast. I'm Just trying to learn how to use Google Maps seeings how I lost my mapping program when my laptop died the other day. Still working on trying to get it back...On a big learning curve with Google. 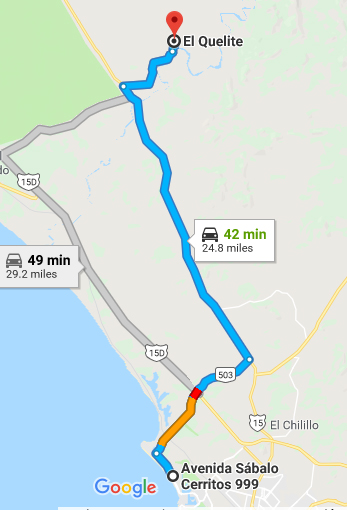 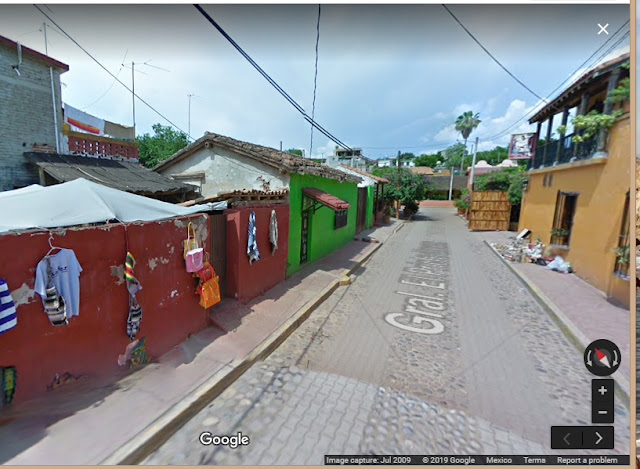 This is kind of the same view now.  It might be fun using Google after all. Just turning down that street -next three pictures.

This was taken from the back seat out the windshield using the zoom - that's why it looks funny.

The town was packed with tourists - there were even vendors on the main street.

Inside the restaurant. There are two stuffed roosters up here and one real one. See him, Can just see his head. He would stand there nice and quiet until people posed in front of where he was to take a picture then he would let out a LOUD crow. Funny watching the people jump.

Deciding what to have to eat. Bill ordered a special meal not on the menu. Been going here long enough they are willing to fix it.

Bill and the owner of the restaurant gabbing about something.

A couple of the waitresses we've known for a long time. They were there when the iguana pooped on my head! So they know us pretty well. I think I'm going to do a blog of just Bill talking to different women.

Oh! look who is here. My friendly pooping iguana. He is up on the roof way away from my head.

And a girlfriend? or an adversary on the way up to meet him.

A little puffing up going on.

well either he is showing off for girlfriend or trying to intimidate some one else.

Closing in on each other

As we watched another two showed up. One looked like a baby, but he blended into the roof so couldn't get a picture of him.
One of the water features in the back room of the restaurant.

Another addition to the restaurant this year. More dining area that goes out over the wash.

The narrow outside walkway - new - from the back room to the front room of the restaurant. The wash that is full of ducks, roosters, turkeys and geese. And sometimes goats.

The wall of the walk way, so pretty all bright colors.

Back into the restaurant. The girls making the fresh tortillas.

A bowl of tortilla dough and a tortilla press. The grill is behind them.

He is playing the harmonica

And I am going to stop here because the Internet is driving me crazy it keeps going in and out since yesterday. So I do a little bit and save quickly then wait for Internet again. Going to post now.
Posted by Carol and Bill at 1:37 PM

Your puffed up lizard shot is the best!

that's because he owed me!

Another great day. My internet has been slow here as well.

glad you enjoyed it