Just some odds and ends from around here. Weather has been stinky - COLD and gray so pretty much hanging around home.
One of our neighbors, a fellow RVer goes every morning across the street to the ocean where he fishes. We always tease him about not catching anything. Well the joke was on us the other day. He caught this by casting from the beach. A red snapper I think. And a big one. Actually it was the second one he has caught this year. 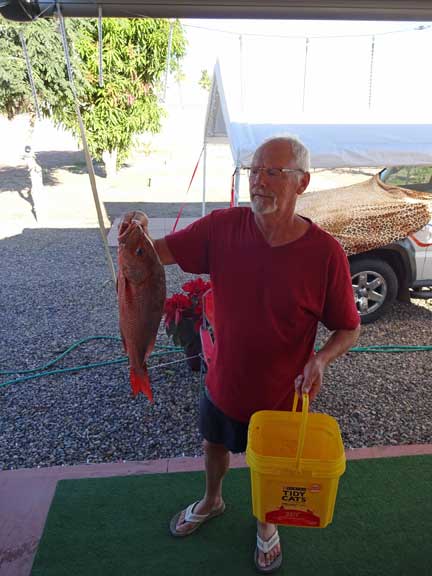 How many RVers does it take to clean a fish? Three I guess. 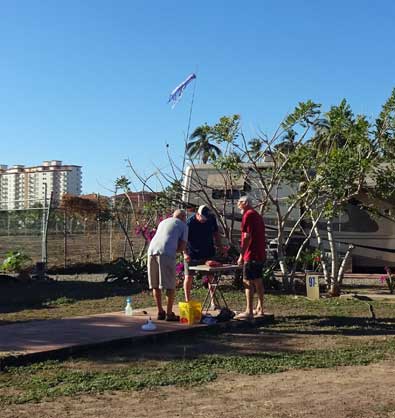 Not a job I'd want to do. They got a couple of nice fillets out of it. And Rafael the park's handyman took the head home to make soup. 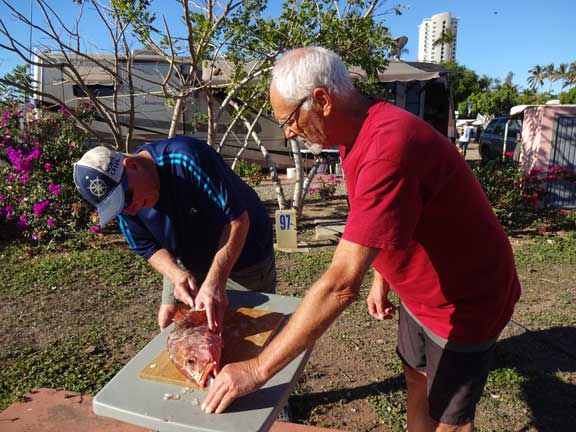 Just to get out of the house we took our laundry in to be done, on the way home we decided to try a new restaurant that is about a five minute walk from the RV park - no - we were driving. It is called Latino's Restaurant. Several people from the park had already eaten there and said it was very good. 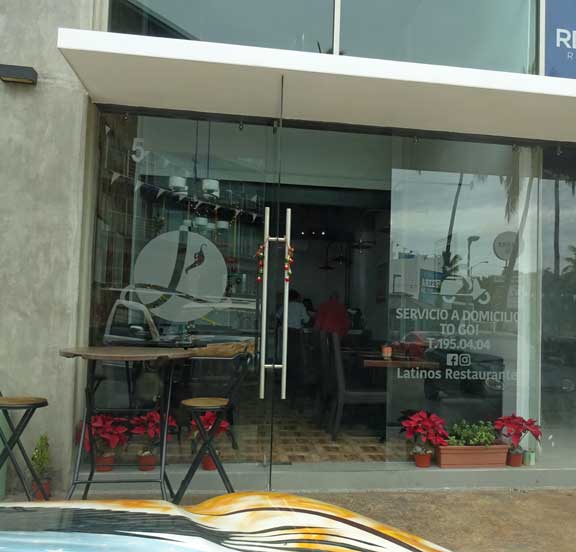 It is a very small place, probably can only seat 20 or so people. There is only one more table for four that isn't in the picture. 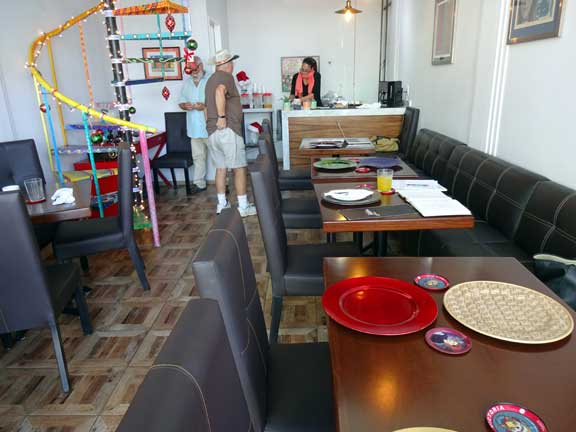 The kitchen is upstairs so everyone and everything has to go up and down this spiral staircase. Towards the right rear of the room you can see two vertical lines - they are struts for a dumb waiter that is on order. Eventually orders and food will come down it. 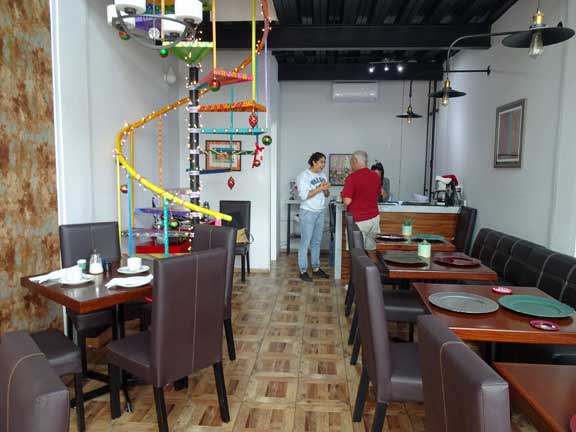 It is family owed and staffed. They are originally from Venezuela. I sure hope it makes a go of it as the food was delicious and it is close to us. 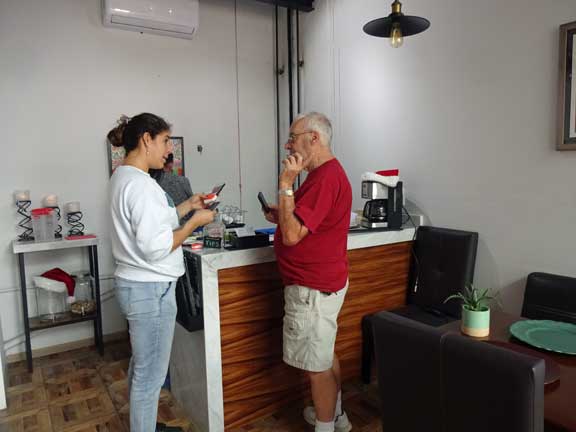 Looking up at the bottom of the stairs. They were all hand painted by a local artist. It is a shame to step on them. 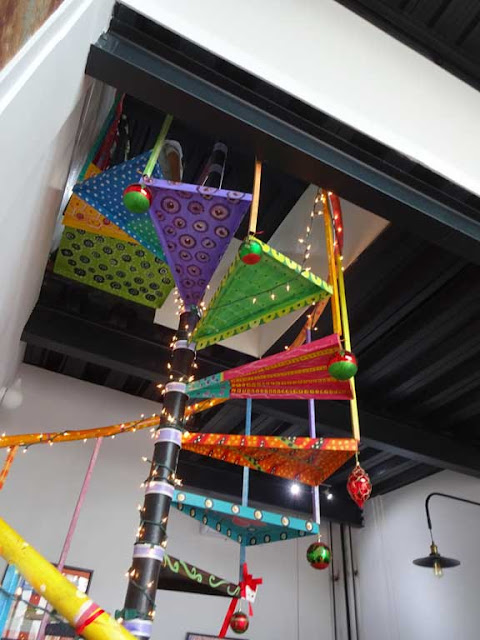 A couple of shots of the stairs, so whimsical. 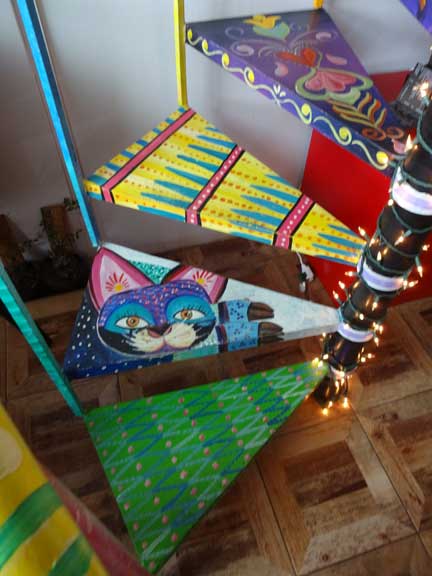 Love the cat. They told me I could go up to the top of the stairs and take a picture looking down. I politely turned down their offer. I'd get about part way up and they'd have to get a fireman to pry my hands off the rail and bring me down. Cannot do open stairs! Maybe I'll send Bill up next time we are there. 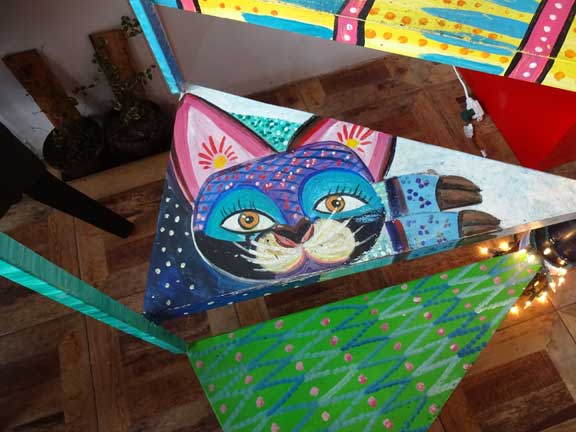 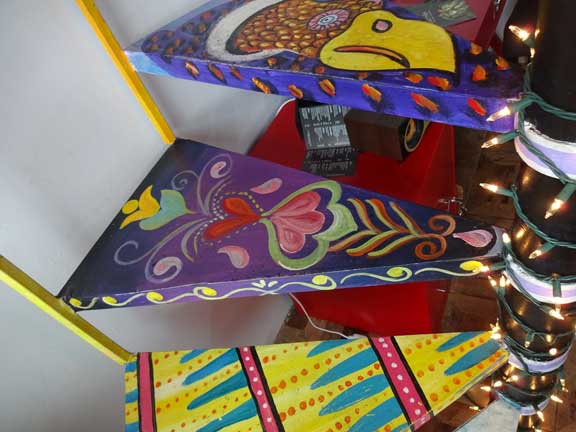 I wonder how they'll keep the painting from wearing out with use. 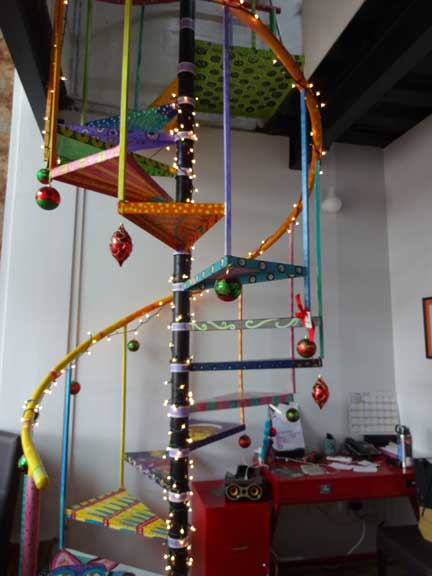 Instead of chips you get yummy hot little corn cakes with different sauces and cheese. 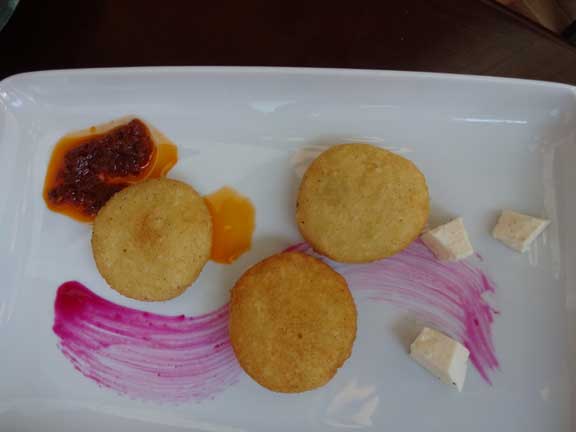 My lunch - coconut shrimp with a pineapple and mango sauce and salad. I licked the plate clean. This is under appetizers on the menu. 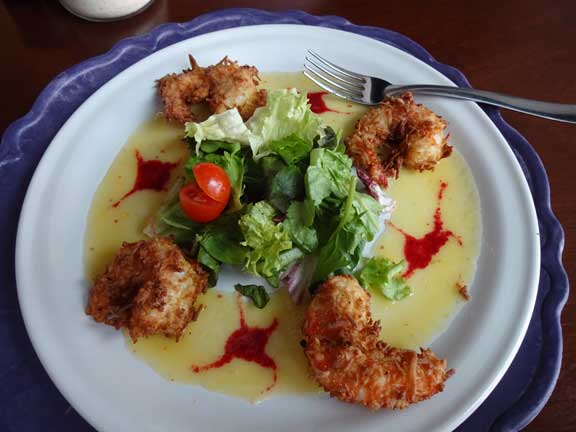 Bill had a Caesar salad - said it was one of the best he's ever had. And it was a large salad. 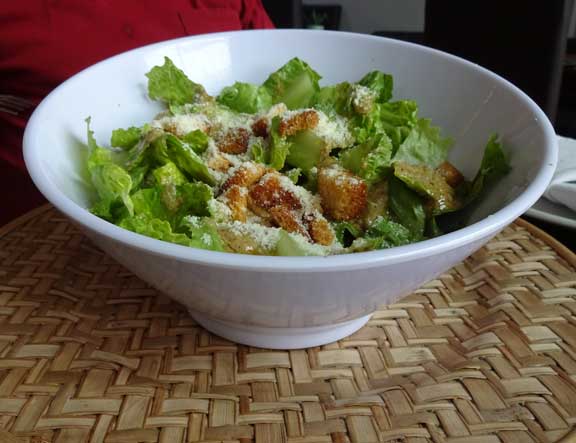 Not a big menu but interesting. They also serve breakfast but don't have a menu for it yet. 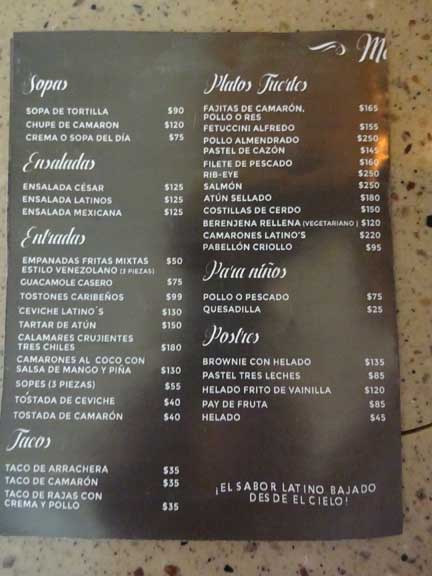 Our Hibiscus are blooming again. This flower was just opening up as I went out this morning. 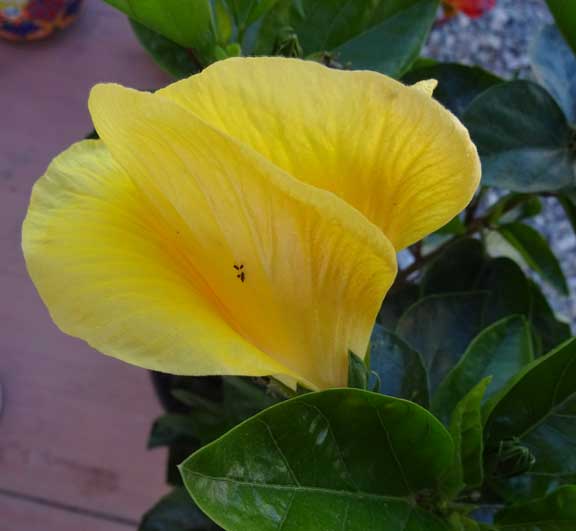 More scenes from the RV park. I was looking out the window and wondered who and when they'd decorated the leafless tree across from us. Nice silver ornaments. 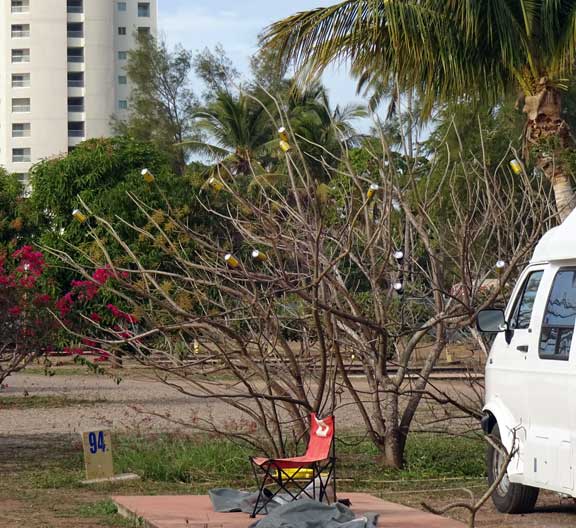 Then I took a closer look. 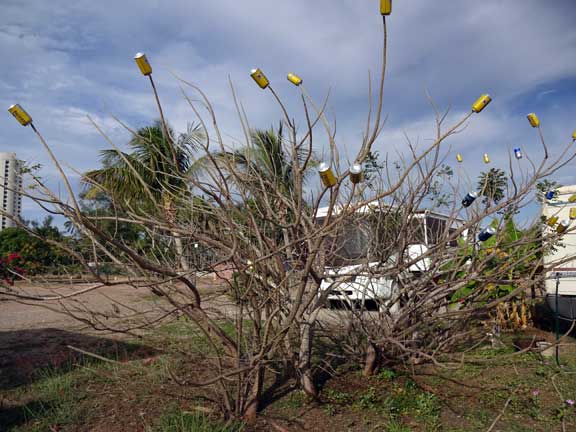 Tried to get a good picture of all the houses that are already started in the area north of us. Had to stand on our stool just to get the camera over the cement wall. Still a lot of dirt between us and the building that needs to be leveled. A near as we can tell there are six individual homes started there so far. Looks like they will be two stories. 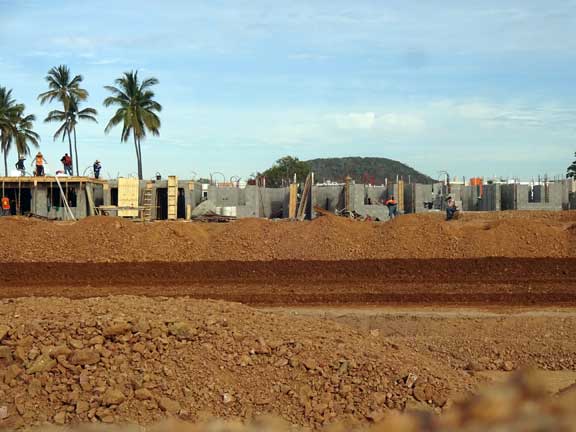 Stopped at the fabric store the other day to pick up some soft flannel to cover the dinette seat where I always sit. Don't want to ruin the upholstery and it is prickly to sit on. This is really comfortable. 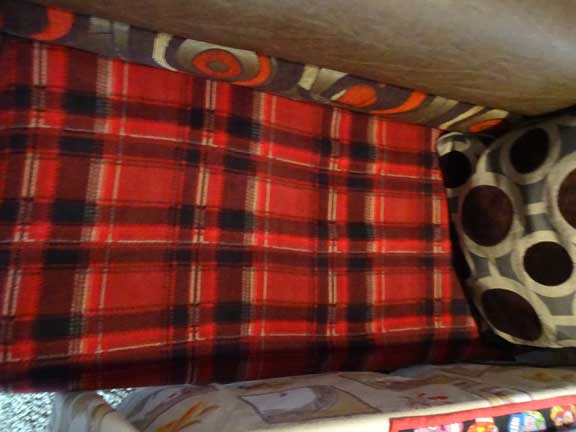 Our big excitement for the day were the four iguanas of various sizes that were sunning themselves in front of the parks restrooms. They finally had enough of being stared at and left one by one. 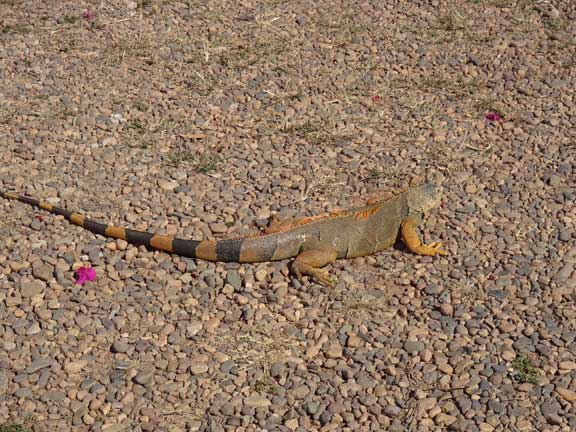 Problem was this guy headed into the ladies bathroom. A couple of us went in to chase him out. It was funny watching him try to run on the slick tile floor. He finally made it to the door and flew across the gravel to safety. 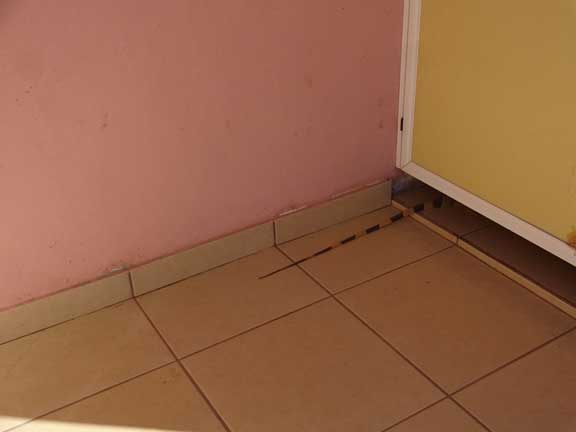 This one - the biggest - just sat there and gave us dirty looks until we grew bored watching him. 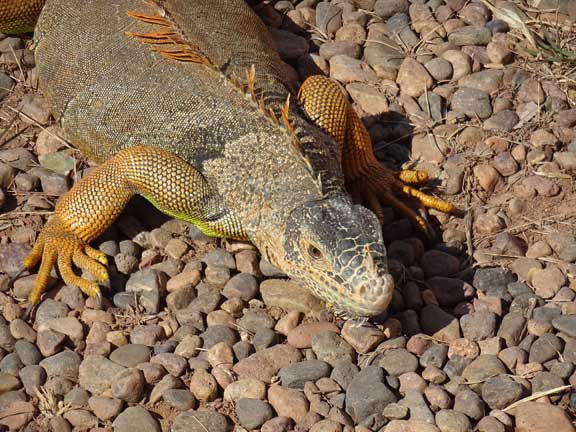 The days continue to be cooler than normal and cloudy until late afternoon. And yesterday the wind was VERY cold. Thought about going to beach to watch sunset but just too cold to enjoy. We did have an outing yesterday, Thursday, though. Another post.
I post this under duress - Bill keeps taking pictures of me reading my nook and I know he wont stop until I post one.  I'm scrunched down on the dinette seat. So cover your eyes here it is! And yes I was comfortable. 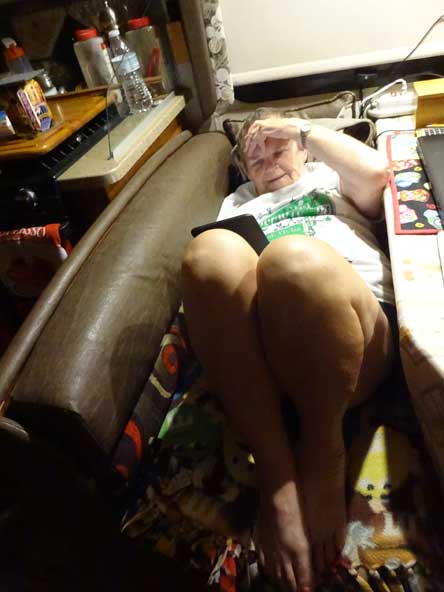 With that I'll end this post.
Posted by Carol and Bill at 4:06 PM

No sunset last night or tonight either.

Happy new year Bill & Carol, hope all is well. I tried sending you an email though it got returned. How are you two doing? Love reading your blogs and enjoying the pics as well. Keeping them coming. Stay in touch. Many blessings, Mari

I’m impressed with the special and informative contents that you just offer in such short timing. 24 hrs food delivery

strange our email hasn't changed. glad to hear from you.

needs to warm up some too. did you go to art walk?

Really like Latinos too...you had the same lunch as I did..yummy. Neat stairs.

I read about it in your blog - thanks