Yesterday the clouds burned off for a while so we jumped in the car and got away from the noise. First we stopped at Latino's Restaurant again for lunch. Bill had his same salad but I had chicken fajitas - Very good. Then we headed towards town wondering how the traffic was. Thought the Golden Zone it was a little busy but once out on to the Malecon there was almost no traffic. But it was still early in the afternoon. There were a lot of people on the beach and in the water. 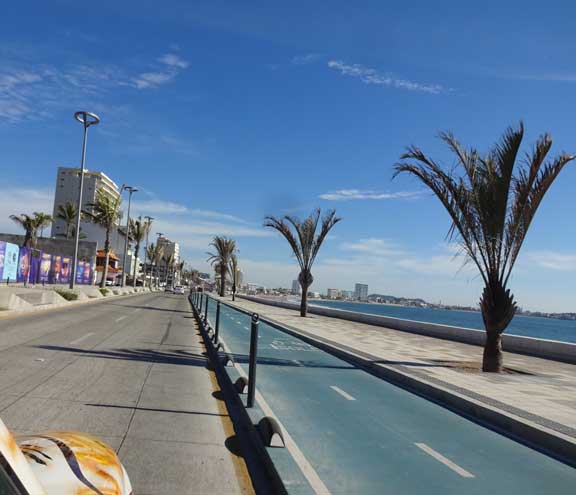 These ramps on the sidewalk were just finished about three weeks ago. As we passed some of them I noticed they were being dug up in three places  on each side and in the middle - I guess to put short barrier poles in. Here is the guy digging out the tiles. He just started on this ramp. 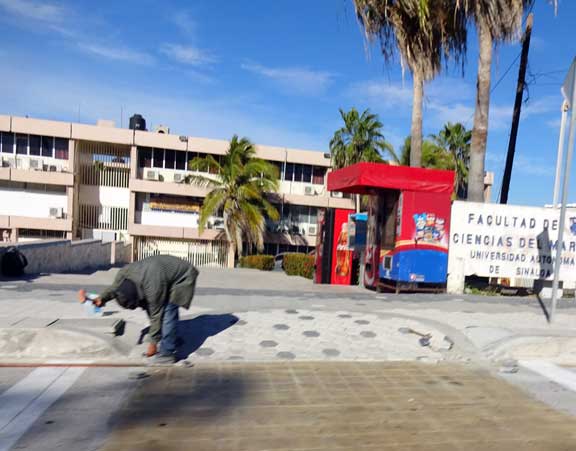 There was a parking place so we stopped at the Sanchez Taboada Roundabout. Just learned what it is called. I always called it "where the divers dive." There is a man standing up on the diving platform. But after watching him a bit we concluded he was the "poser" He attracts attention while the real diver collects. When the diver gets enough money he goes up, the poser get down and the real diver dives. 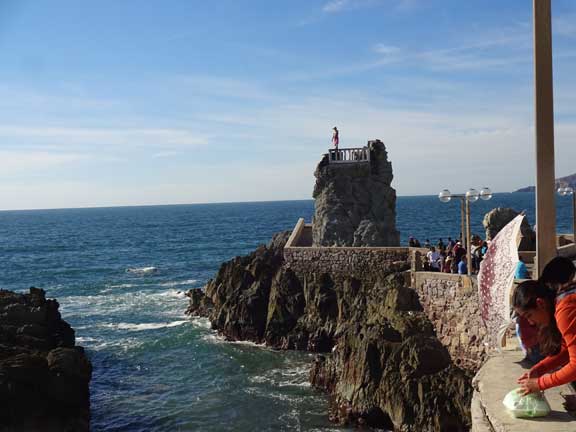 It looks like all the vendors that used to be in the street and along the sidewalk here are back. In the spring before we left the city made them leave the area. Even though they all had permits they had paid for. About three weeks ago the new city government decided to honor their permits. BUT they could not be in the street or on the sidewalk. They had to be down in the big paved area where the flagpole is. 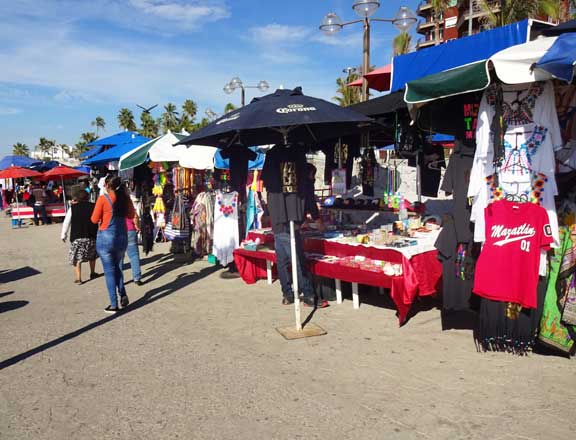 The cart on the right serves Raspados - shaved ice with real fruit and juice poured over it. Kind of like a snow cone only much better. To the left of the picture you can just see the diver's platform 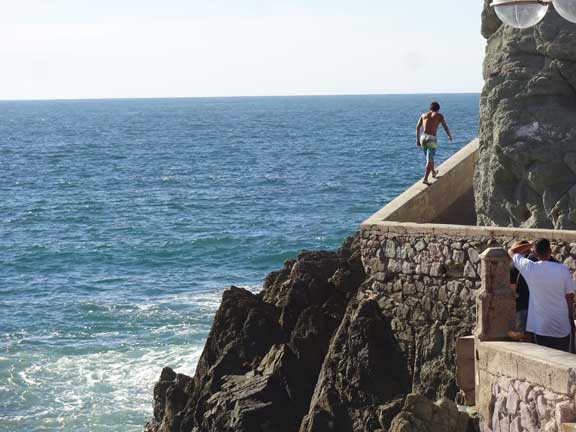 And here he goes. He watches the waves as the water is pretty shallow. Picks the highest wave and off he goes.
Just a look around at the area. As Bill pans the drone right you can see the dolphin monument
Thank you Jackie for the idea for this picture. What a scene. 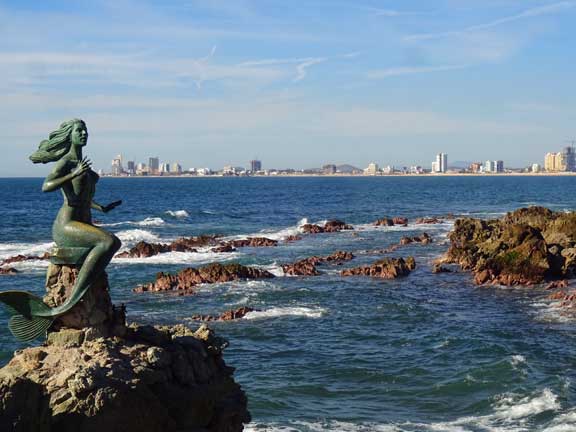 A neat drone video of the area.

Just some of the colorful items the vendors sell. Can you imagine living up on that hill? 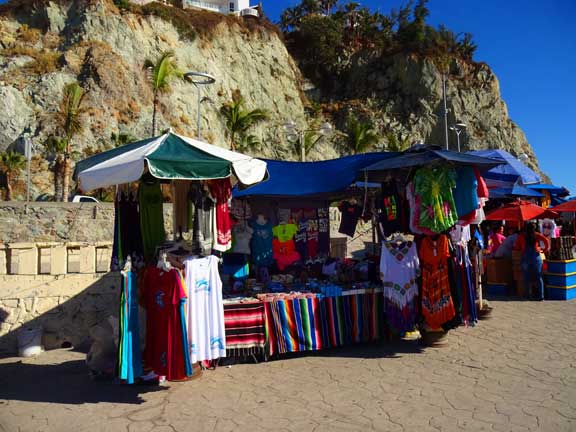 This stand sells bags of chips then the top is cut off and all kinds of stuff is poured over and added to the chips. Hot sauce, cheese, etc. 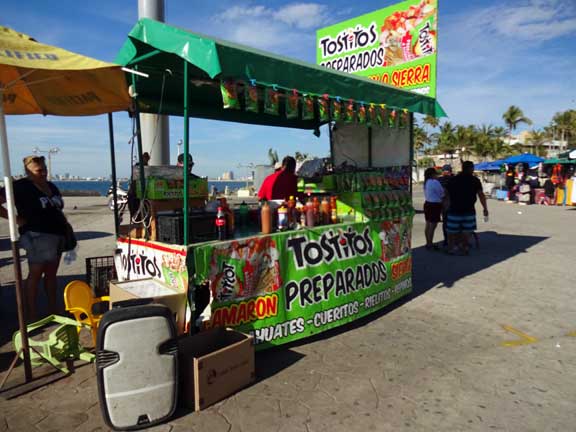 Coconuts with the tops removed. I tried to get a photo of her swinging the machete but wasn't fast enough. She swings a mean machete. Again all kinds of things are added to the coconut before it is eaten right out of the shell. 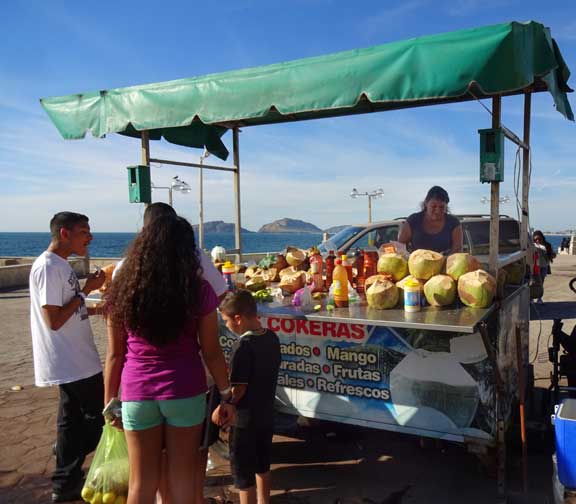 She goes through a lot of coconuts in a day. 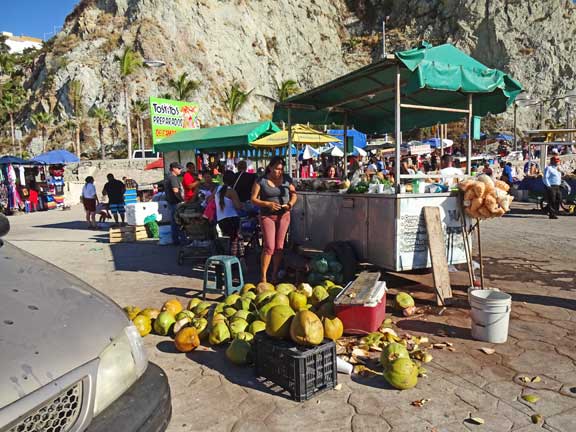 A garbage truck came in to empty the trash and pick up trash while we were there. That is something we hadn't seen before. The big post is a huge flag pole. But the only time a flag is on it is holidays. 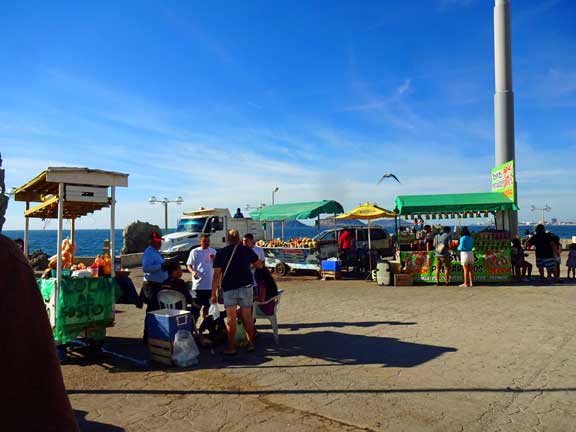 Hats and sun glasses for sale. 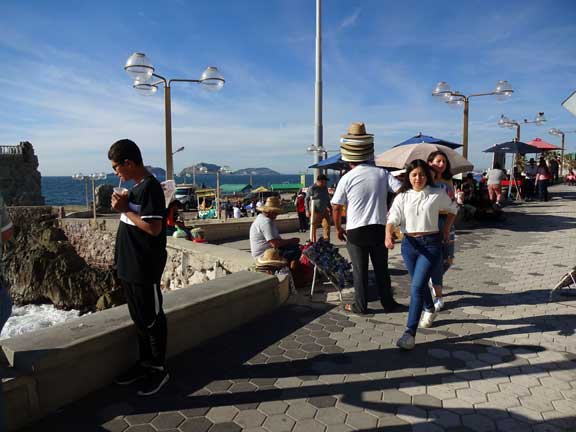 Playing with the drone. The brick colored tall building across the street is condos. We looked at a few of them years ago. So beautiful and the view!!!! 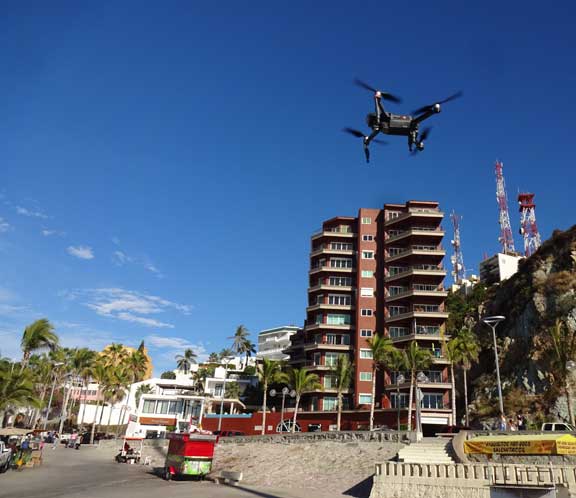 No diver up there - tourist just climbing the stairs to look around. 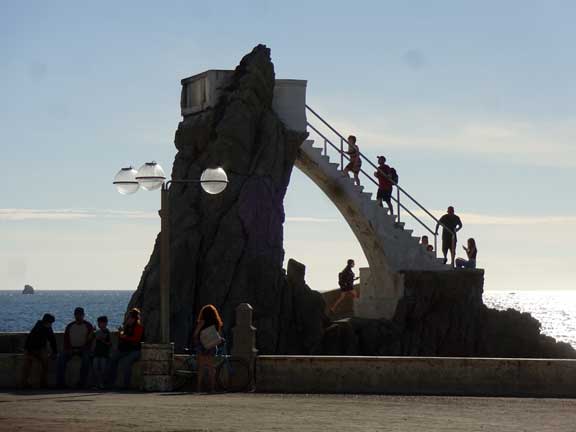 More drone video from same area.  A little boy was blowing bubbles at the drone.

He was running out of bubbles. 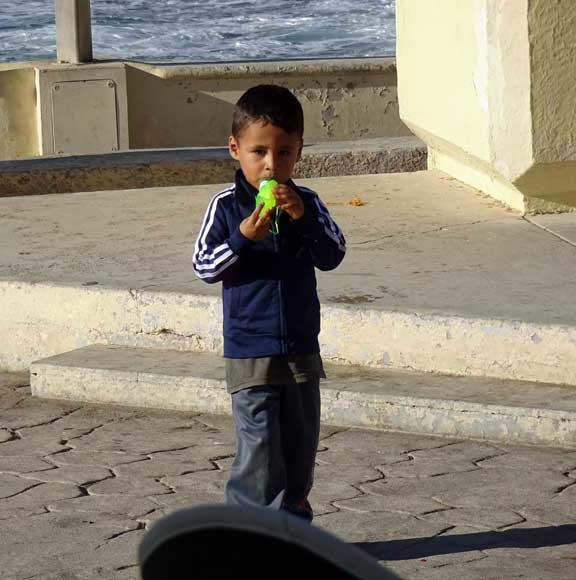 These kids were fascinated by the drone. You could tell they wanted to get closer to it but they didn't. 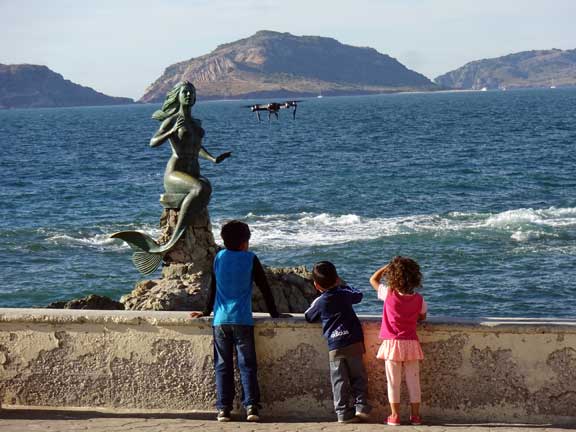 Took this on the way back to the car. So colorful. 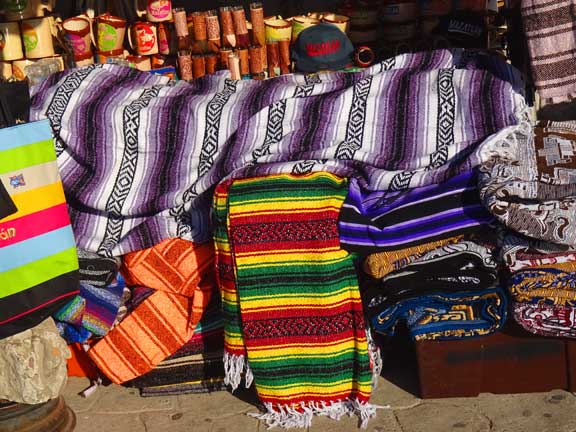 Into Olas Altas  hardly any traffic. 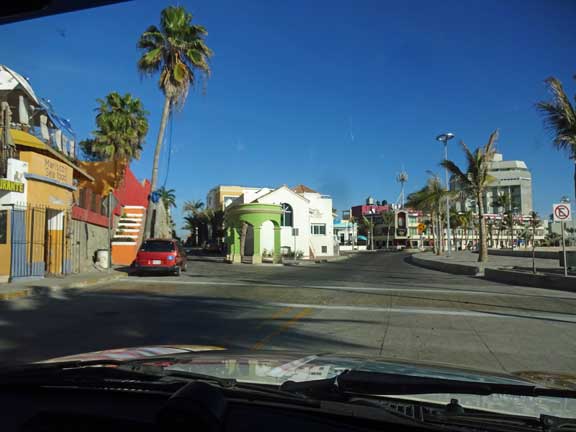 A pleasant time away from the noise and dust. Shame on me but I'm glad a lot of the tourists from inland are on their way home. Makes getting around the town a lot easier.
Posted by Carol and Bill at 12:56 PM

The idea was all John's, he took the photo!

it is so pretty

I still see you in that condo building. I think you would be happy there with the ocean at your front door!!

who wouldn't be - the view is spectacular.

Our friends just bought into that building. 5th floor, right next to the wall of rock. Fantastic view but oh so very very very much noise. You can't even hear each other inside unless you close the patio doors.