Sunday at the Tianguis in La Noria

Posting early today while Internet is working.
I am still kind of figuring out how to post the Google Maps - so forgive my practicing. Also love the old pictures I find of places we've been.
So Sunday started out nice and quiet but a little windy. We wanted to get out so convinced one of our friends here in the RV park to go to breakfast with us to the beautiful hacienda La Martina restaurant for breakfast. I've posted enough pictures of it for a while. We visited with the owner and she was somewhat upset - can't blame her. The day before someone carved their initials in one of the huge old trees down by the children's playground. And another customer went into the garden and picked a bunch of the beans growing there. What is the matter with people. So now she is fencing off the side garden and putting some gates up.
But as usual we had an excellent meal and great views.
After leaving the restaurant we continued up to the little town of La Noria to go to the tianguis - like a small flea market. Here is a map showing the way and the distance. 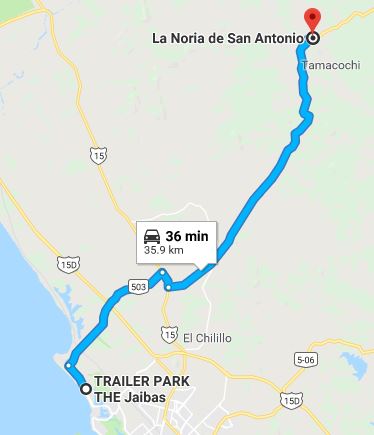 We could smell these chickens grilling before we could see them. So good.

Talking about how much building has been done on the soon to be hotel and restaurant being built over the old buildings.

The flowers really complement the cactus.

This is the same building as in the two pictures above. Taken 2010. 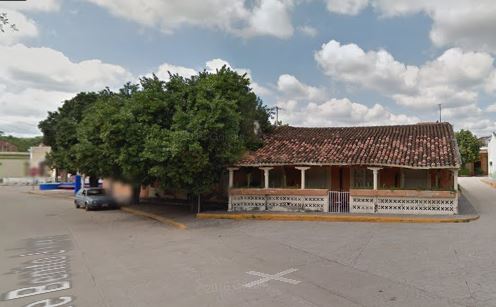 Another man just riding through town.

At the tianguis. Always children painting the pottery.

2010 picture from Google Street view of the plaza. 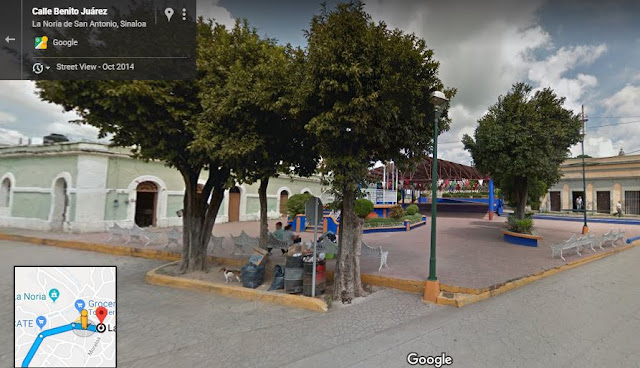 Checking out the tianguis. Lots of food and music.

Bill talking to Jessie the wife of the leather shop owner Roberto. She is also the manager of the tequila distillery. Her future daughter in law is with her.l

The next table over this wonderful lady was selling hand made jewelry. Every thing made out of organic products. I bought this necklace and earrings. Made of dyed corn husks and corn kernels and a seed of some kind. 150 pesos about 7.50 dollars.

Hard to see as everything was in a plastic sleeve. Some made out of sunflower seeds, bougainvillea flowers. Others from pistachio shells and all kinds of beans. Very pretty.

Showing me one of the necklaces and a pair of earrings. Very talented. So fun to see.

Then I got a little ceramic pig from this man. Hope I have room on my window sill for it.

Some other items he had for sale. Miniature paintings and bigger pigs.

She had a lot of jewelry sets for sale. Hope she had a good day.

Just a picture of the gazebo.

We were leaving when people were still setting up. But it had already reached almost 90 there. Too hot for me.

A different wiring job. Guess it works though.

Ladies protecting themselves from the hot sun.

A bbq under a big tree.

That night, Sunday we went out to dinner in the Plazuela Machado to listen to music and watch people dancing.
Just a foot note in case you aren't on Facebook.
It is 4:00 in the a.m. Tuesday. Guess I got about 2 hours sleep. Rough day. At least in the middle of the night the Internet works. Bill is in the hospital in their version of ICU. All we know for sure is that it IS NOT his heart. Everything there is normal. His blood pressure dropped really low - but now that they are giving him something for it it was REALLY high when I came home. He says he has a belly ache and no one seems to be interested in that.
funny how they do things here ...- eventually our Blue Cross will cover everything. But they wanted a deposit on a credit card - no problem First she said 10000 pesos about 525 dollars. Okay. Then she left and came back and said they needed 50000 pesos about 2500 dollars. That is when Bills blood pressure went up. He said NO WAY. The 500 okay but not 2500. According to the girl it would just be a refundable deposit. Bill still said NO. By then they were already talking to the insurance company. Finally settled on the $525. Don't know what will happen when it is time for him to come home. I've heard that if the insurance hasn't kicked in they won't let him go without paying the whole bill.
Earlier in the day I drove the Jeep home from the hospital and parked it under its canopy. Later when I went back - strict visiting hours I had a friend drive me to hospital and then took a taxi home. When I got home I realized the canopy was falling over. There was a really strong wind from the north and a couple of the stakes had come out. I moved the car out from under it and as good as I could with the wind blowing straightened it up and got a couple of stakes kind of back in the ground. Will have the park handyman help me with it this morning. Luckily I had put the RV awning in before I went to hospital. {One thing taken care of Rafael, parks handyman, and one of the other RV guys came over early this morning and secured the canopy.]
And of course the Internet wasn't working. It is so quiet in here without Bill and without the laptop or TV. [Update - right now the internet is working, but it is only 8:00 a.m. - hope it continues to work. I think it is everyone watching the football playoffs.]
Tried to sleep but not having any success and don't want to take a pill Just in Case I get a call.
I have a feeling they might release him today as long as it isn't the heart. Might still be the lung infection - don't know. What ever it is hope they can clear it up. Never did get much sleep. Internet started working about 4 a.m. so I turned the TV on for noise, think I slept some.
And that was our day yesterday.
Update. turns out it is gall stones - having surgery Wednesday morning at 11  Why does every thing happen to him while we are in Mexico.?

Carol, so very sorry that Bill is in hospital - is he in the same hospital this time? Thoughts and prayer for both of you.

Sorry this had to happen in Mexico, but Bill will feel much better a couple of days after his surgery. Hope it goes well for you, and please do keep those of us not on facebook updated. JudyJB

No he is in the fairly new one Marina up by WalMart. Nice place.

I am glad it is being done. Hes not been feeling well belly wise off and on for a long time, but never mentioned it to doctors. Just thought it was his stomach. Never thought about gall bladder! So we won't be going home for a while at least. Will update here too.