One day last week we gathered up a couple of friends here in the RV park and went to La Martina - the pretty restaurant - and went to breakfast. After eating we continued on into the little town of La Noria to check on the progress of the new restaurant and hotel that is being built there. We actually ended up doing a lot more than that.
The blacksmiths shop was open, very seldom do we catch him open. Very interesting man. The shop has been there for many, many years. Belonged to his great great grandfather. It remains pretty much the same. There is electricity there now but the roof is original. 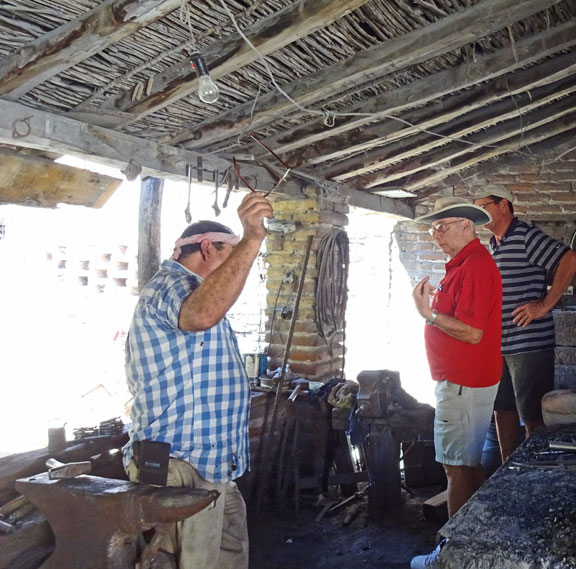 This anvil has seen a lot of work over the years The tree trunk it is in is almost rotted away. 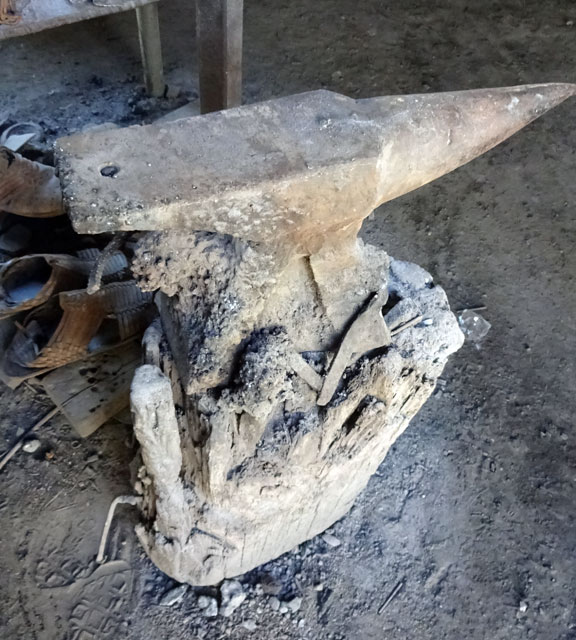 Some of the brands he has made over the years. 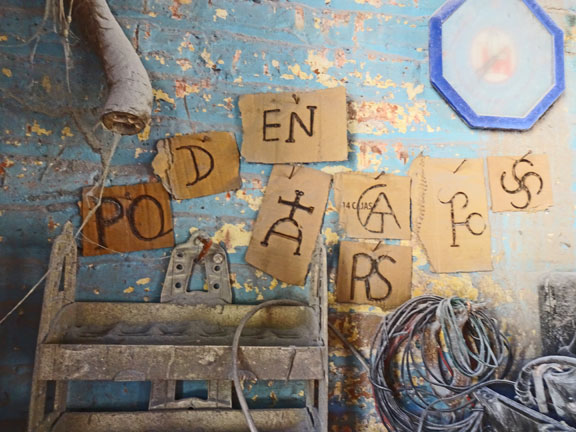 A customer waiting for his job to be finished. 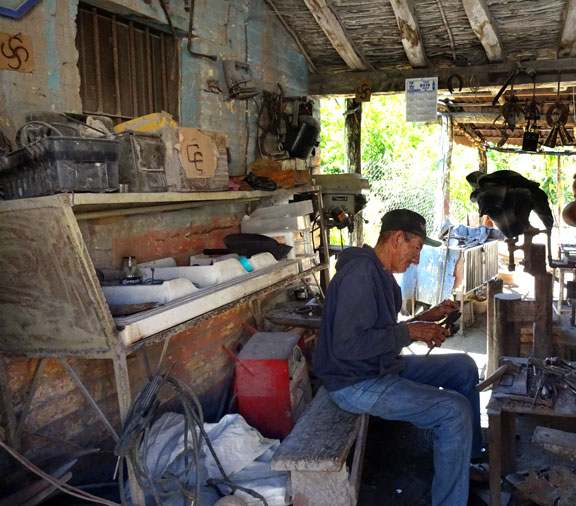 The whole shop is very small. And open to the back yard. The blacksmith's house is behind the shop. 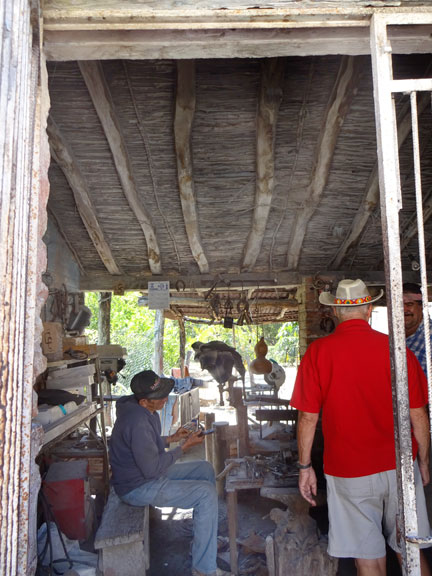 They were laughing about something. Probably about the time I had Bill buy some donkey horse shoes to take home. 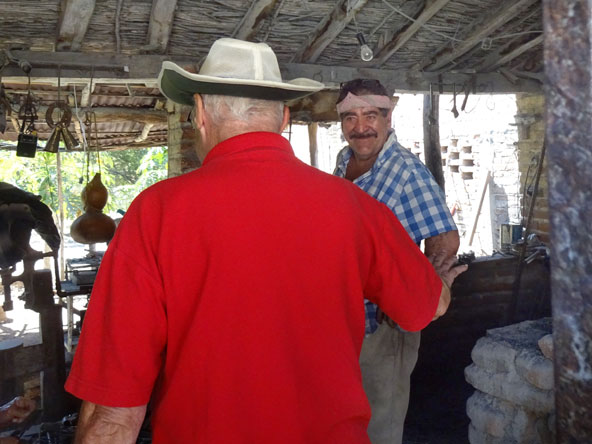 On up the street. This part of the construction will be the hotel - about six rooms. The whole thing is being built above existing structures. And it takes up a whole block. 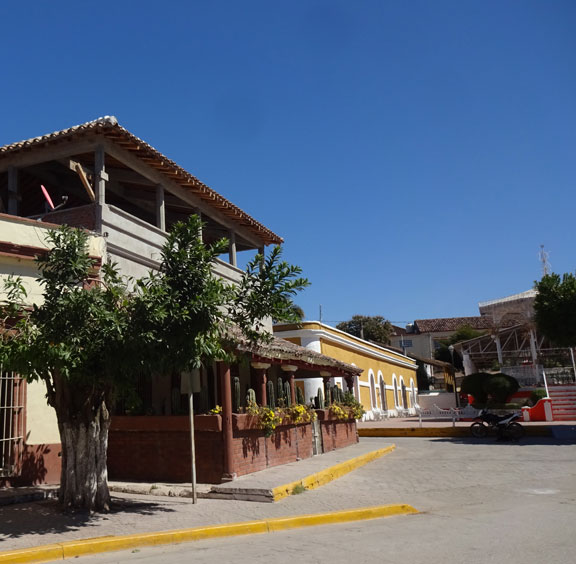 In our friends Roberto's leather shop. In the green shirt is one of Roberto's sons. We met him when he was about seven! Time flies. 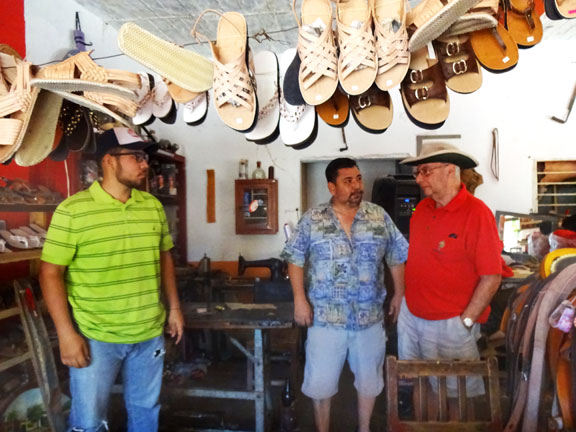 The strange little aqueduct outside his leather shop. Some times it has water in it sometimes not. This day the water was running. No idea why it is here, just a water feature I guess. 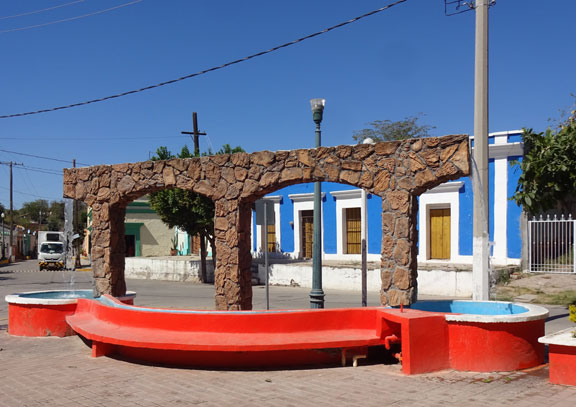 More of the construction, this will be part of the restaurant. It is supposed to be ready to open in the fall. 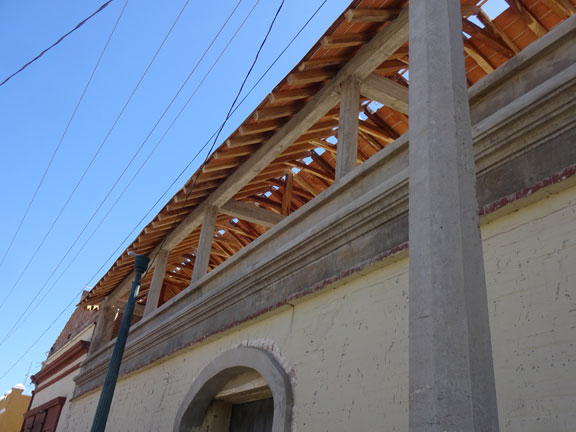 Around the block, more of the construction. The hotel rooms will have little balconies. 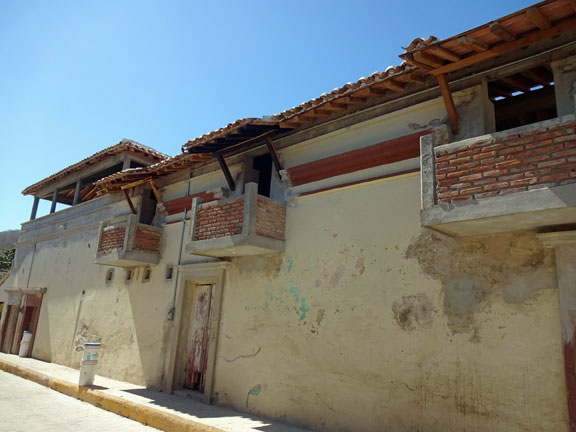 Back to the front again. The old house on the ground floor has a neat planter with cacti and yellow flowers. The roof over the porch is very old. 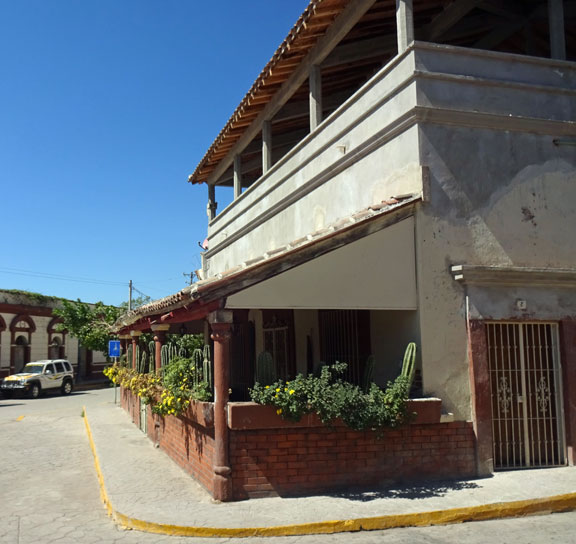 Across the street to visit Johnny's leather shop. It too has been in the family for several generations He has a new sign listing a few of the things he makes and sells. 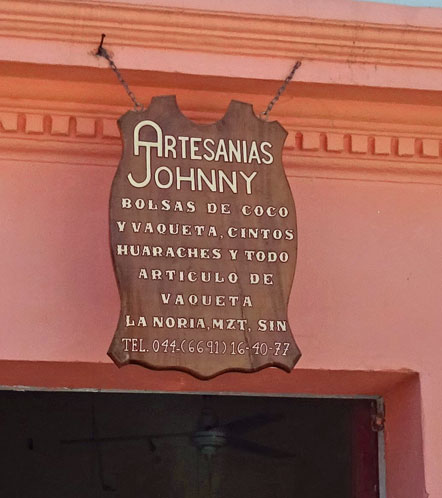 Inside the shop Bill talks to Johnny - on the right - and his father. 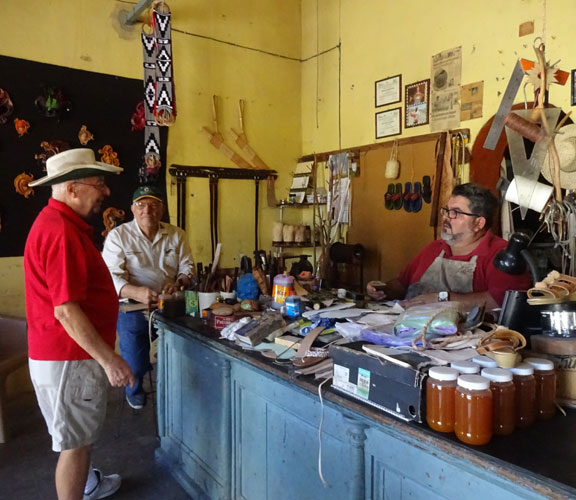 We love to go through the shop out into the back. There are old buildings out back that at one time housed a group of soldiers during one of the revolutions. Even changes back here. Some of the rooms have been demolished - they have been falling down for years. Now this area is used for pottery making demonstrations. [since the cruise ships have been coming back to Mazatlan a lot of tourists are again coming to the little towns like La Noria.] Pottery has been made here for generations. 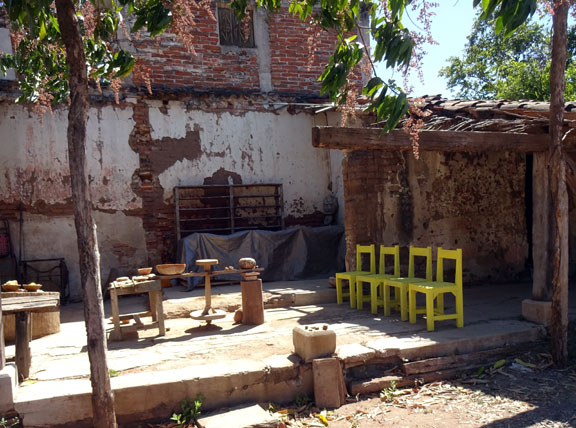 Wish they were giving a demonstration while we were there. 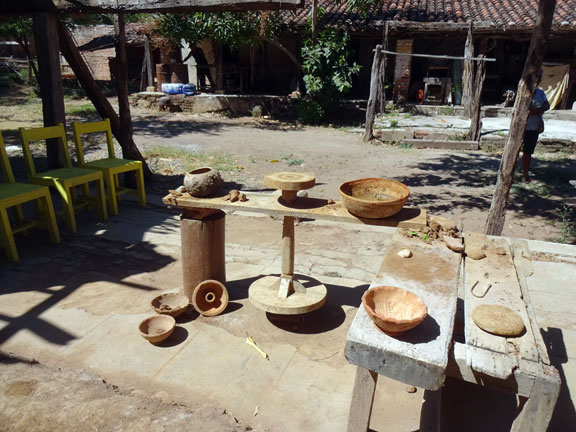 This old room is kind of still standing. It was used to house soldiers. 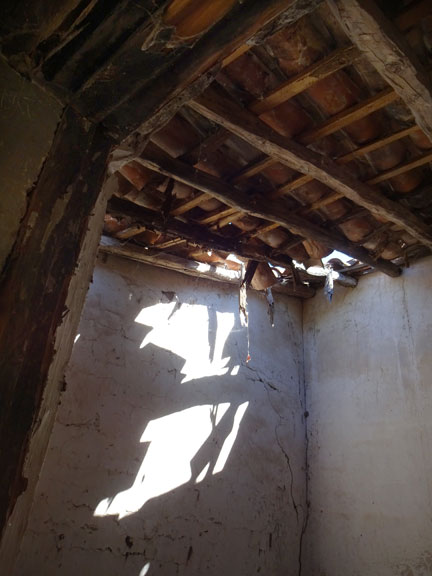 Heavy metal forms for cutting out the soles for sandals. 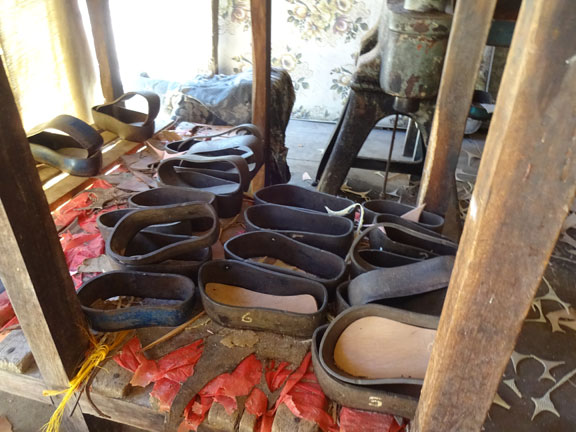 Way back in the back where the horses were kept. Also another building for the officers.

Several young men were working on making sandals. A pile of soles. 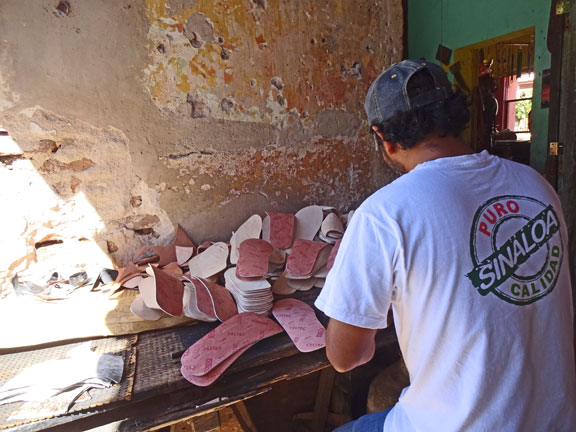 Some sandals drying after being made. The young man in the back is putting the top of the sandal together. 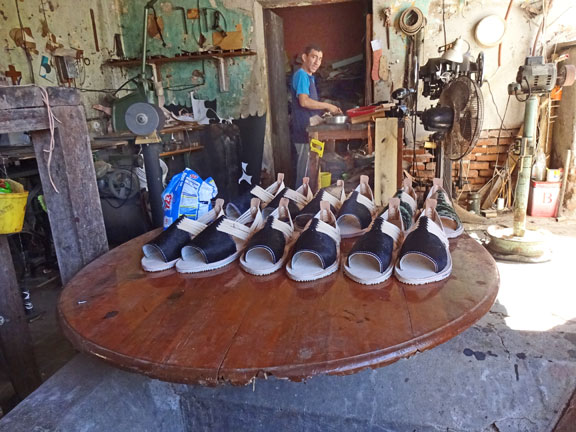 Here is his work station. One shoe is partly done. 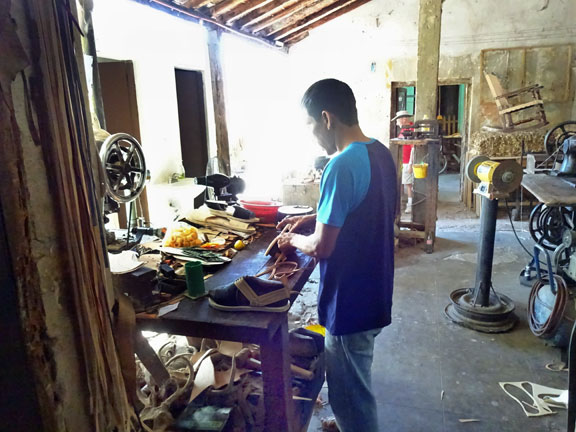 A new rocking chair. They put the leather back and seat on it. 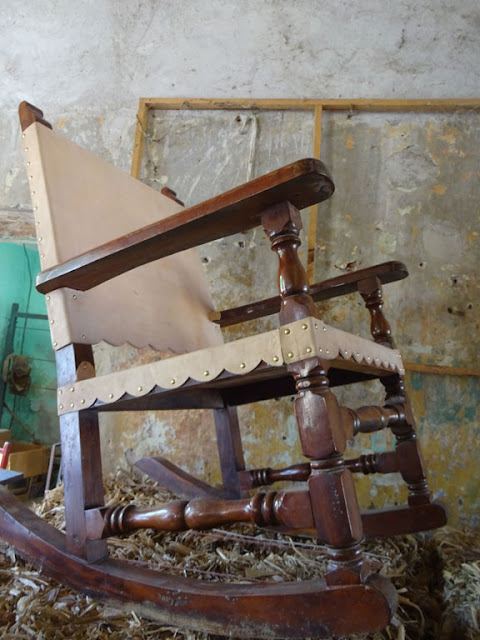 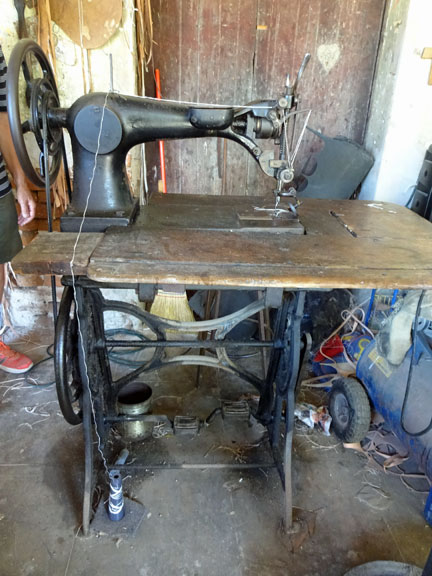 One of the saddles that is waiting for the buyer. 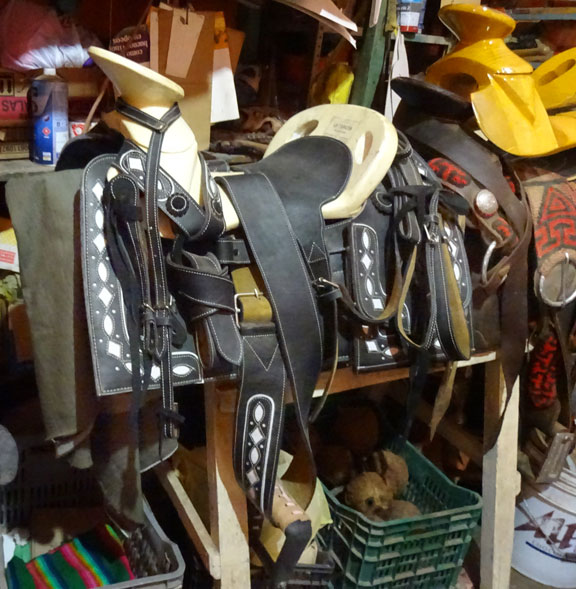 The older men in town stop by for talk. 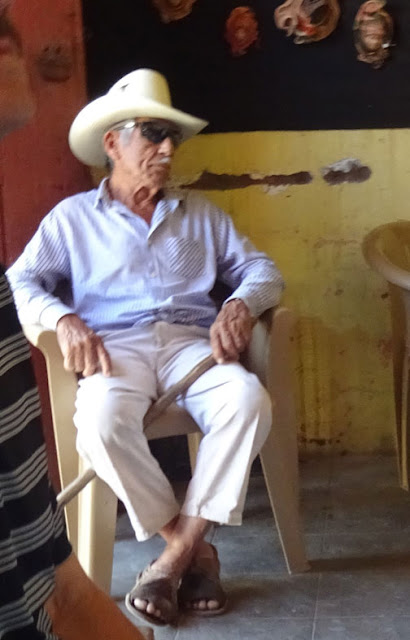 He is wearing some of the sandals made here.
Then on home, it was 15 degrees warmer in La Noria than in Mazatlan. In fact when we got to the campground the fog had come in and really cooled things down. Another great day in and around Mazatlan. So good to have Bill feeling good again.

Fascinating place! And I love the amount of wear on the table for the sewing machine. Only thousands of hours of use could wear it like that! Imagine all the shoes made on the machine.

I agree about Bill feeling good.

It is fascinating to watch them actually sewing on it. Once they get into rhythm they really can sew fast.

Always something new going on there.