Yesterday morning started early for me - way too early. Got up at 4:20. Then realized we had no electricity as we were overnighting in a truck stop. Didn't want to turn generator on and wake Bill up. Didn't want to turn heater on for same reason. And I'm ashamed to say - I wasn't sure if the gas furnace would run without electricity. Guess I should learn a few things. Did finally figure out I could turn a burner on on the stove to heat coffee and give off a little warmth. In the Alfa and at home I'd have needed a match to turn on the stove. Glad I tried it without 'cause I couldn't find a match!
Yesterday was a terrible drive but today should be better. Another 240 miles drive. to San Carlos right on the Gulf of California. And we will be staying in an RV park with electricity and water.
It is now Saturday morning and I'm writing from San Carlos. Bill has the furnace on - it is very cool here at night. After we got here I just wanted to sit and read! So will try to catch up now.
Yesterdays drive. Only 239 miles - more about the miles later. Took 5 hours, no stops except for another inspection. $27 [523 pesos ]in tolls and another 20 pesos [a little over $1] at a booth where "the people" are collecting "donations." One agriculture inspection. 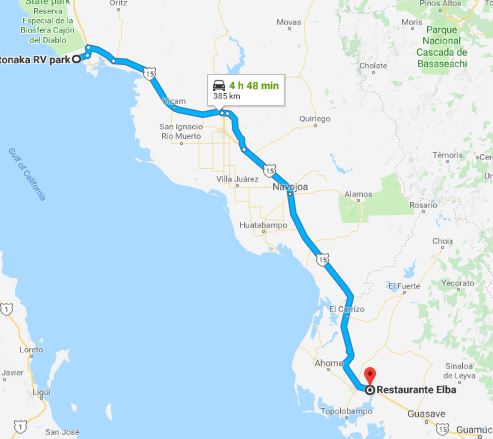 Bill trying to get the mirror straightened out. He did get it tightened, but only lasted for a few rough miles. At a tilt again. Hasn't gotten worse or fallen off...yet. 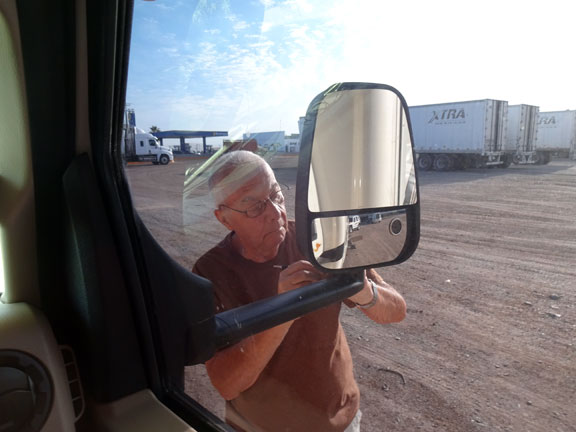 We left the truck stop at 8:00. Just up the road a ways we came to another accident. This was a bad one. 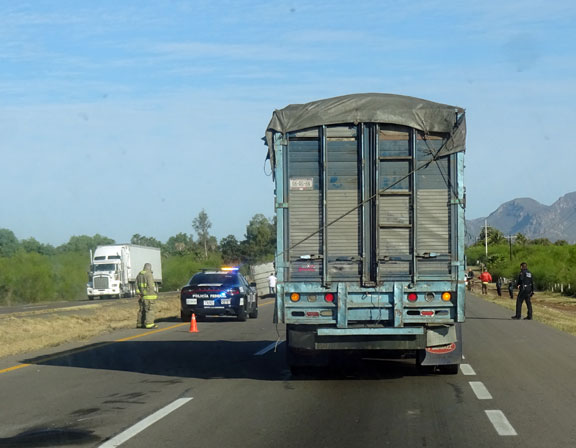 We are on the north bound lanes, the blue truck is facing south. No idea what had happened. 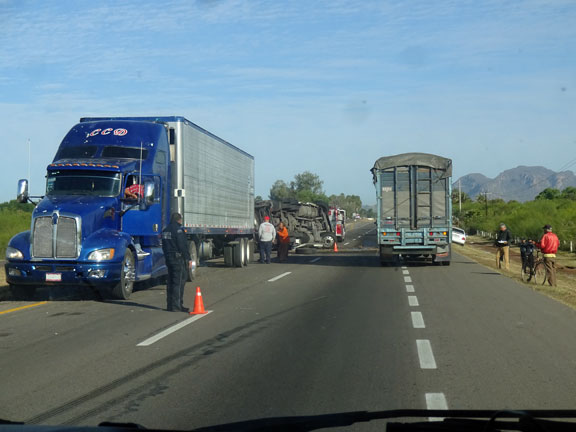 Think there was also a couple of cars involved. This lady sure looked and was acting upset. 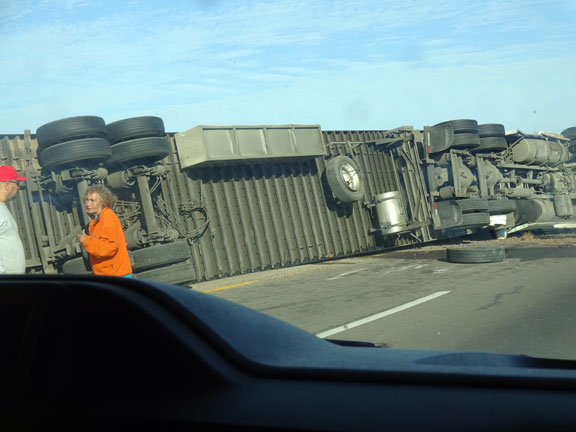 An accident waiting to happen - he is just slowly strolling across the highway. 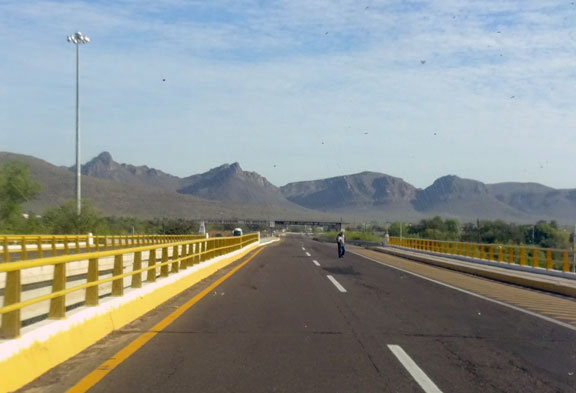 I wonder if he gets charged as a car or as a truck. Poor little car. 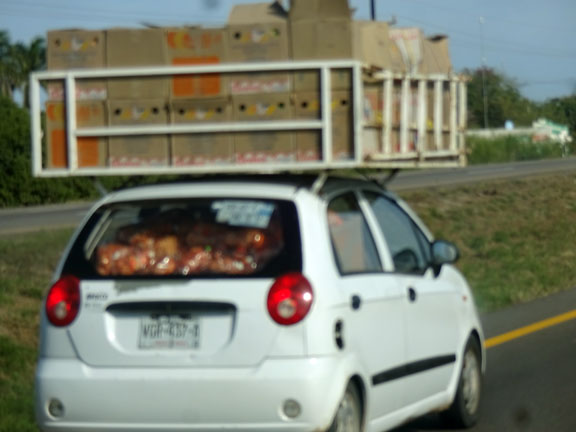 For any one thinking about staying at the new RV park just north of Los Mochis. Really slow down as you reach the area. A lot of semis park along the right side of the road so it is hard to judge where the turn off is. I could see the road leading to the park before we got right up to it. But because there was a semi parked right before it we would have missed the entrance. It is a sharp right turn. I didn't see any signs nor the park itself.
Up to here the road was pretty good. After the toll booth near El Carrizo there was a detour to the southbound lanes. A bridge on the northbound lanes had collapsed. And the road was a little rougher.
Another really loaded vehicle. Full of rocking chairs. 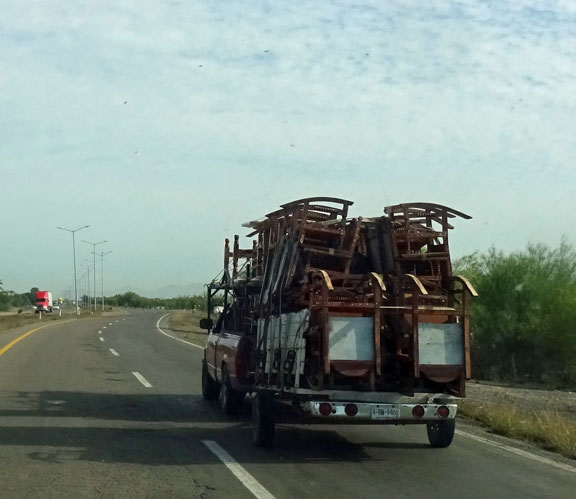 This was a military inspection. They just waved us through. 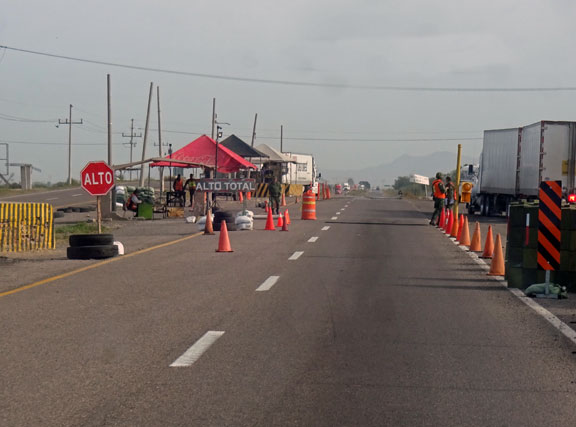 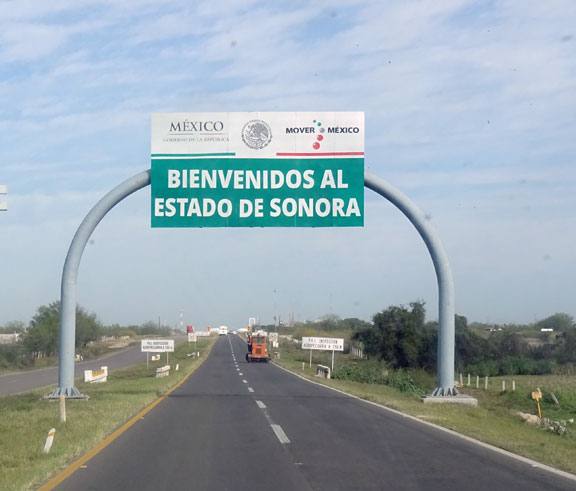 Ah the infamous fruit and plant inspection station. No way to avoid it. 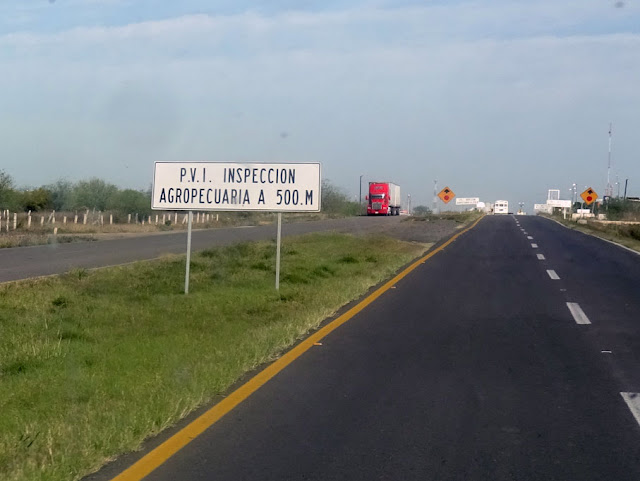 Look at the pot holes leading into it. They aren't potholes they are canyons. Through this area drive very slow and carefully. Things get shook badly. 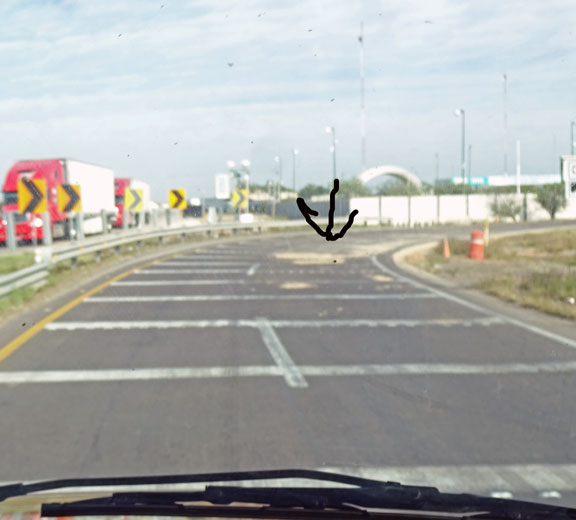 There are pot holes and topes on the left side too. 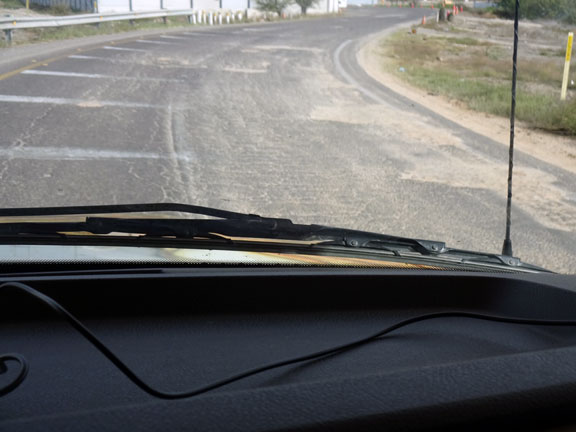 Have to stop. Just asked us if we had any fruits or plants. We said no and he waved us on. 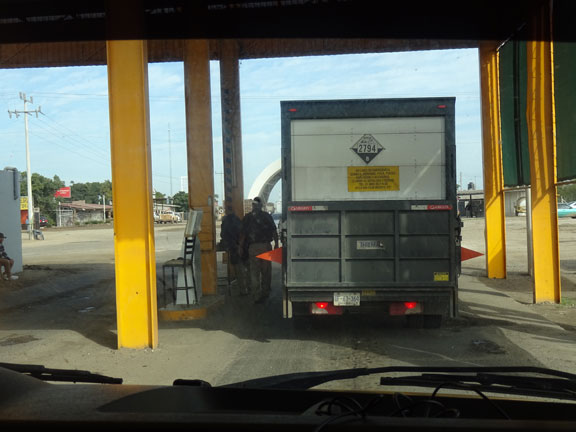 Leaving the inspection station. Lots of rock and roll. Make sure everything is secured.


If you want to watch this fun episode in full screen click here.
Can't seem to get away from the dump trucks. 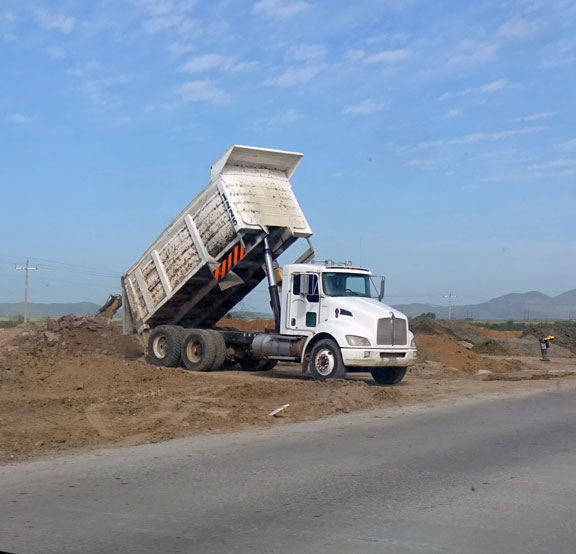 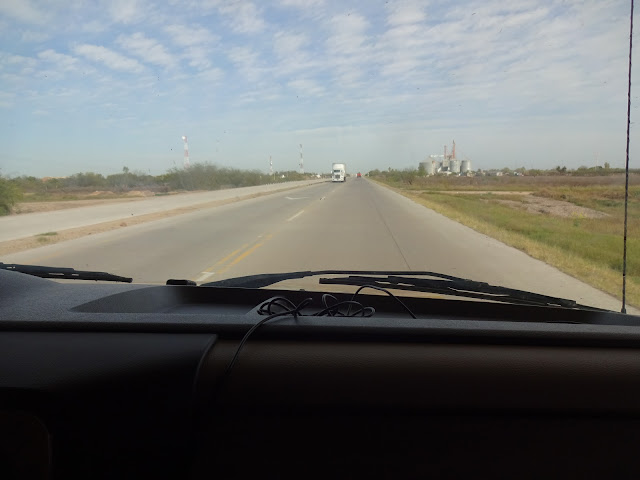 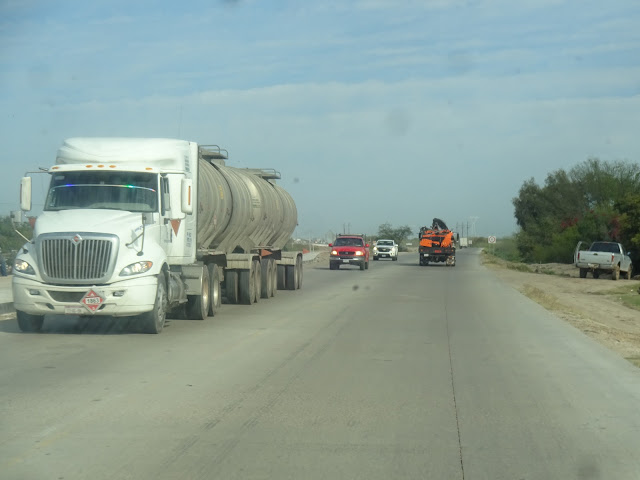 Some not so nice transitions from north to south bound lanes. A little off roading involved.
And going back to the other lanes. 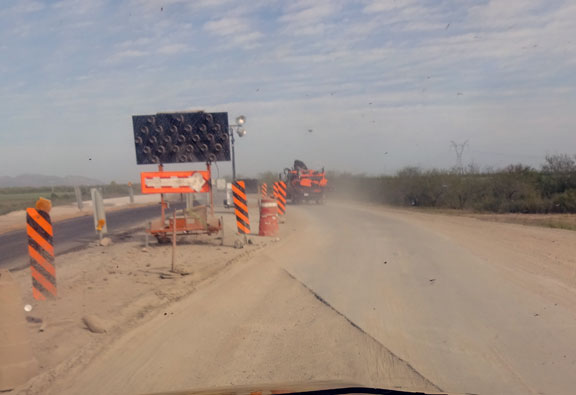 Some really good news though. At Estacion Luis [around km 90] there are now only four topes - two sets of two each - instead of TEN topes. 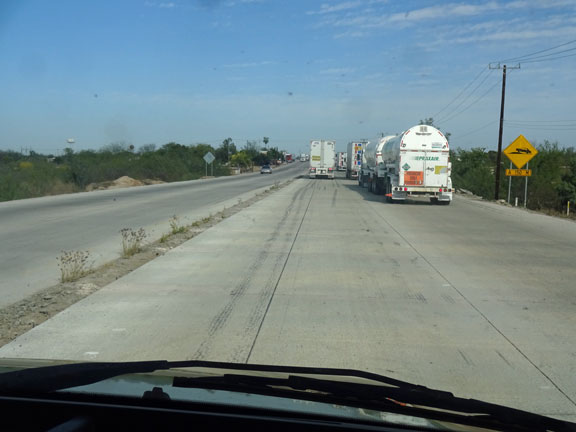 Both directions of road going through town are paved.  YAH!! To see this full screen click here.

From here the road wasn't bad. But watch out for the vibradores  by the Pemex gas stations and the little towns. I have never been able to get a good picture of this. Either I forget or there is traffic in the way. Yesterday the light was wrong and the camera didn't get a good focus. But with a little help it is kind of clear. 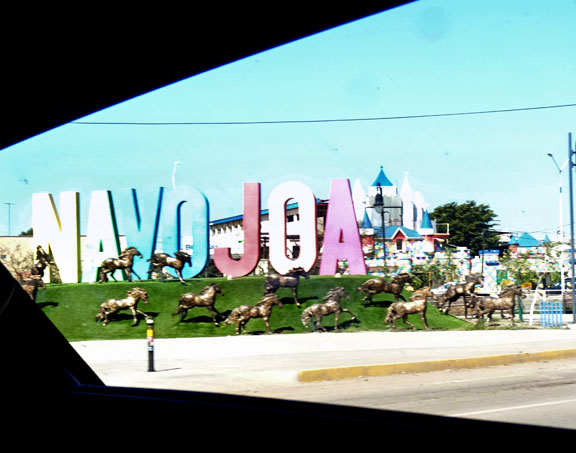 As usual we only got one light green going through town. All the rest were red!
Topes just the other side of town by the hotel.
On to the new bypass around Obregon. Love it.  Signs are clear, but it is kind of a sharp on ramp from the highway.
Going to stop here for now. Internet is giving me fits. Will continue with yesterday's trip next blog.