Finishing up our time in Rock Springs.

We are now in Vernal Utah, but will leave that for tomorrow's blog. It deserves it's own time. Especially the highway getting here!
A little information about Rock Springs.  Rock Springs is known as the Home of 56 Nationalities because of the influx of immigrants from all over the world who came to work in the coal mines that supplied the fuel to power the steam engines of the Union Pacific Railroad. The medium income is $70,000 And the average age is 31.5  according to what I could find on line.
We left off yesterday at the park by the train depot. A bright splash of color. 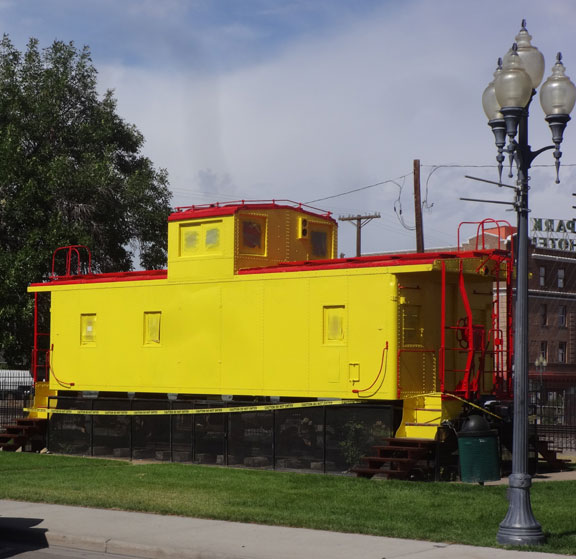 This is hard to read, but couldn't get it any better.

A monument to a miner and his horse. They drug the coal up out of the mines. 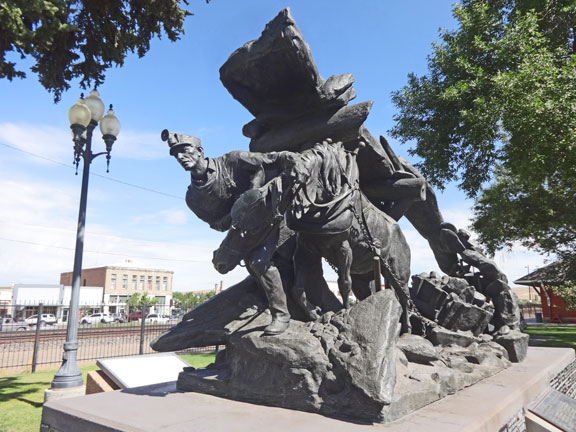 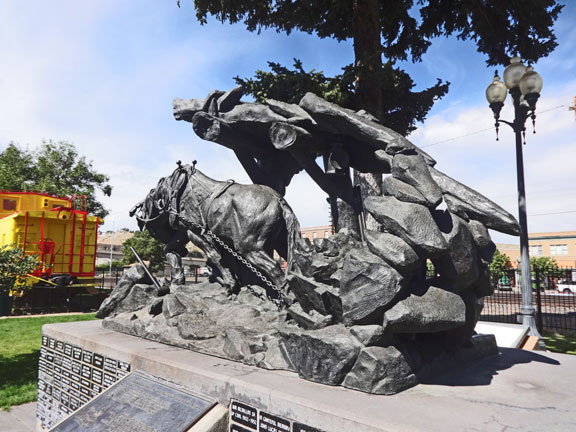 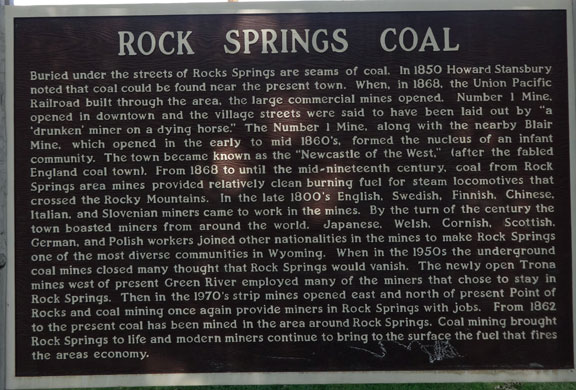 This building is across the street from the Depot. Such a pretty building 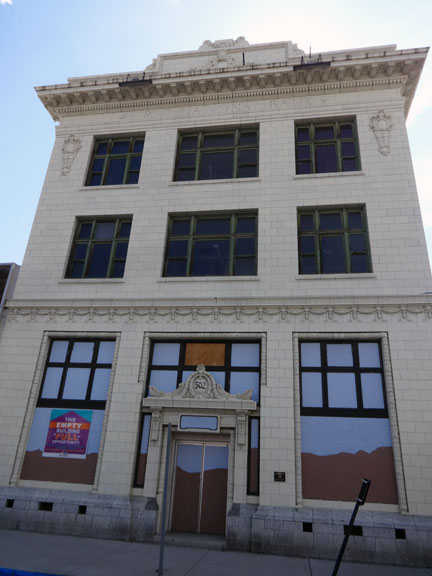 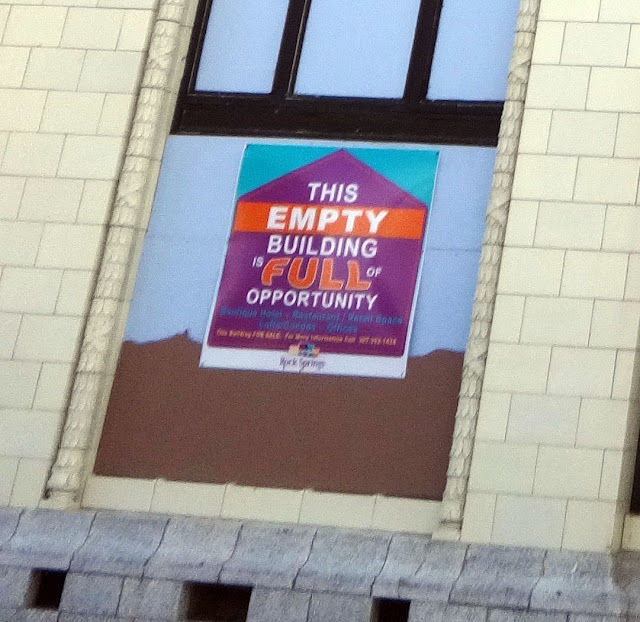 All the windows are boarded up ad painted to look like mountains and sky. 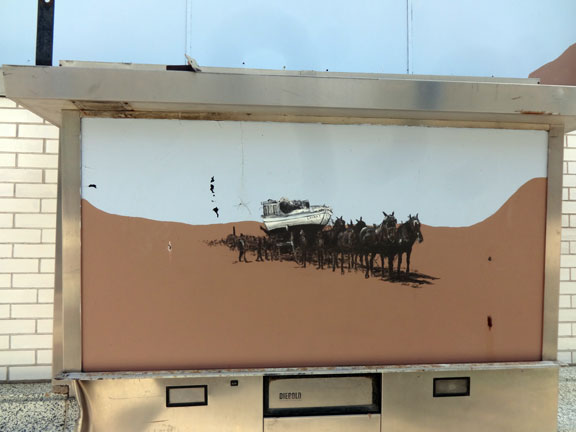 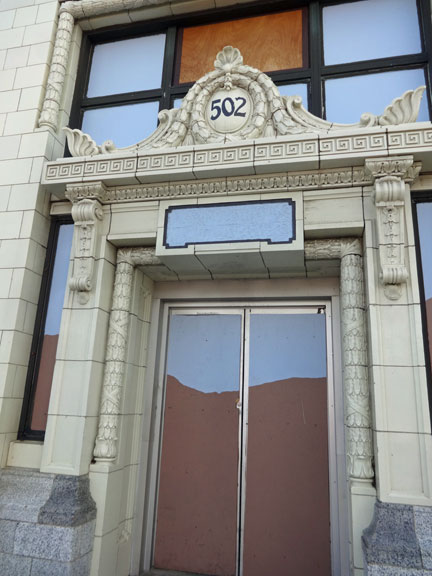 The old train depot is now a coffee shop. One of the few businesses open in this area of the old part of town. 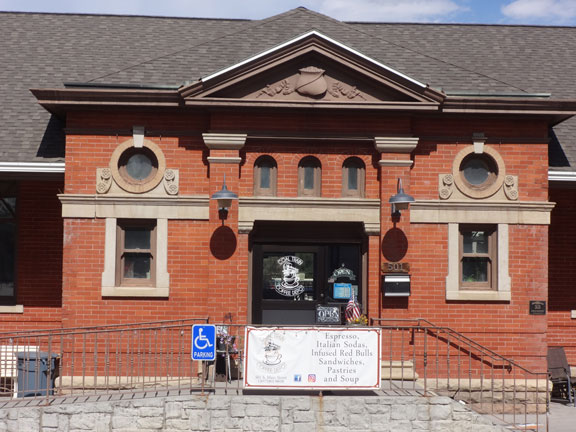 I guess they tried to revitalize the area. The side of the pretty white building is behind the sign. 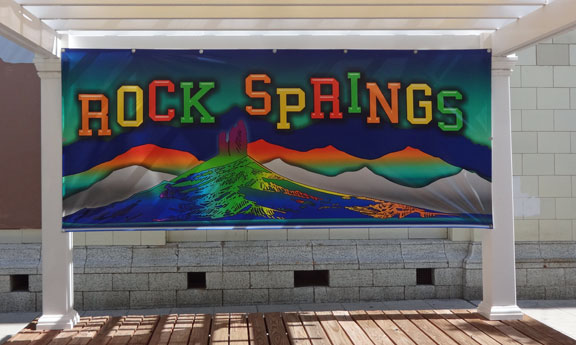 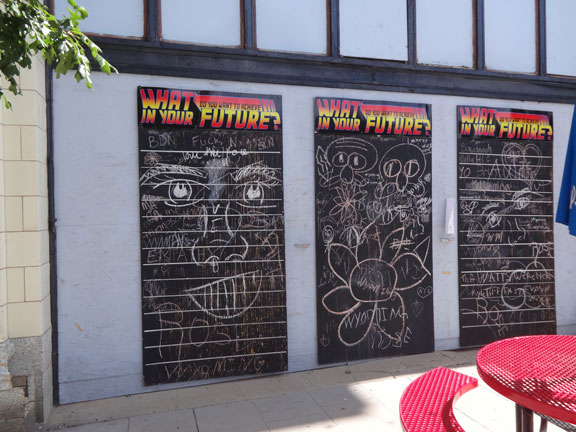 Put in an outdoor seating area 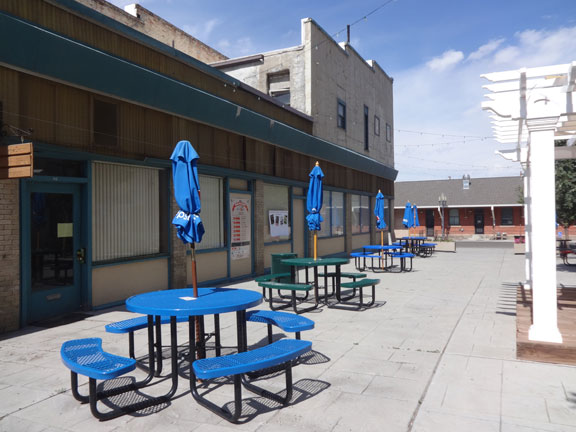 And had concerts here during August. 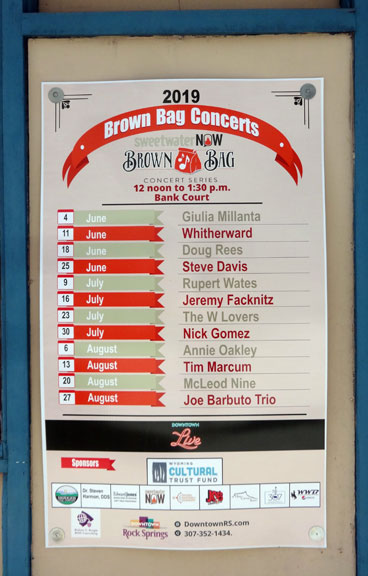 Saw a mural inside an empty building so had to look inside the window. Surprised when I saw all the dead pigeons on the floor. Wonder what that story is? ICK! 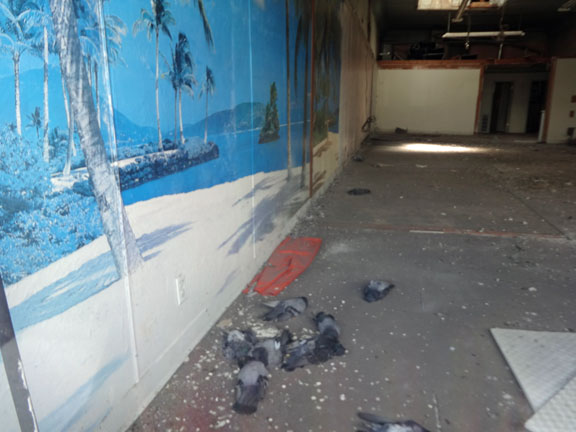 Another empty building that has the windows covered. 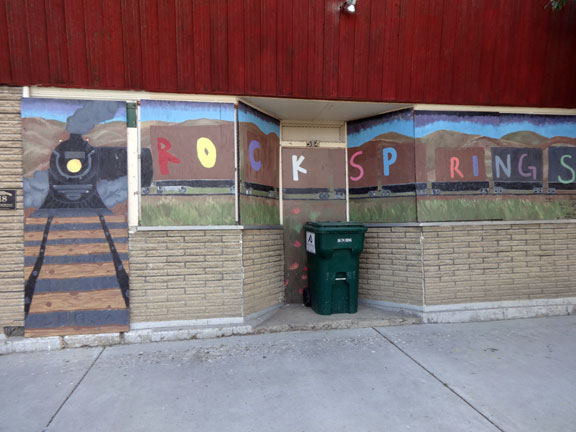 The top of that building . I like the old light posts looks. 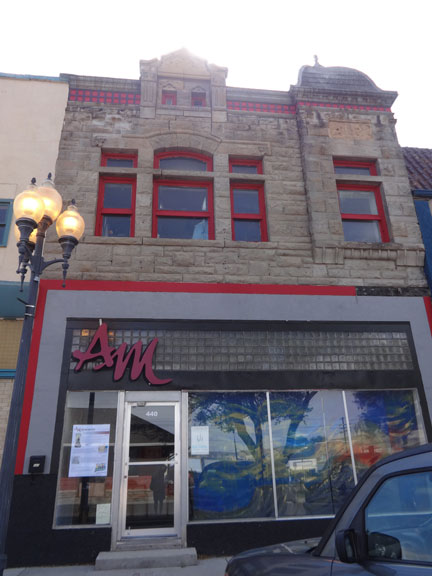 I noticed these on stencils on the sidewalk in front of some of the buildings. Several different ones, maybe mascots of school teams or something. 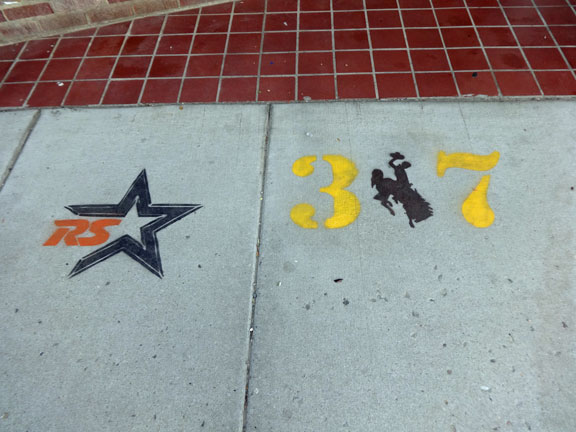 I like the look of the tiles below the windows. Remember that look from where I grew up back east. 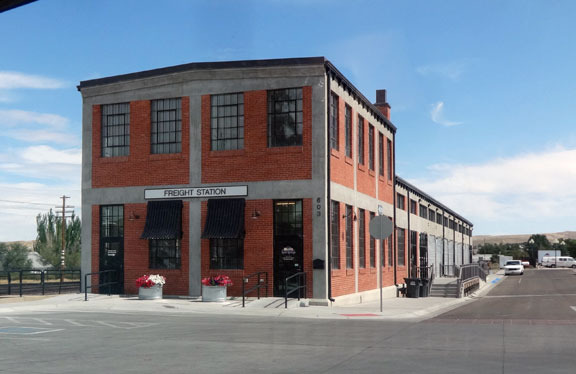 A really neat mural but couldn't get a good picture of it. So took it in sections. 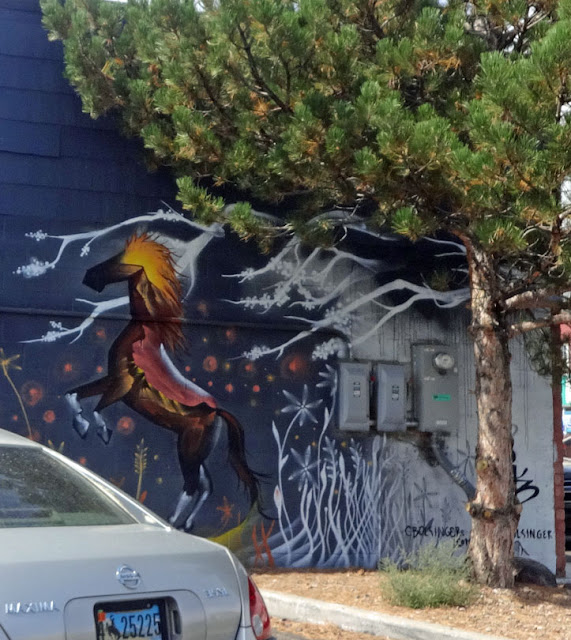 A lot of work in it. 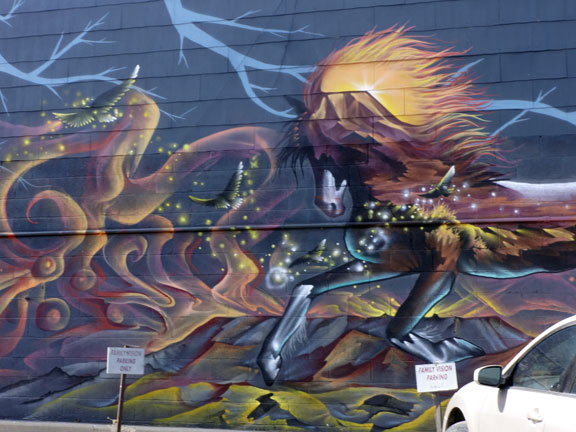 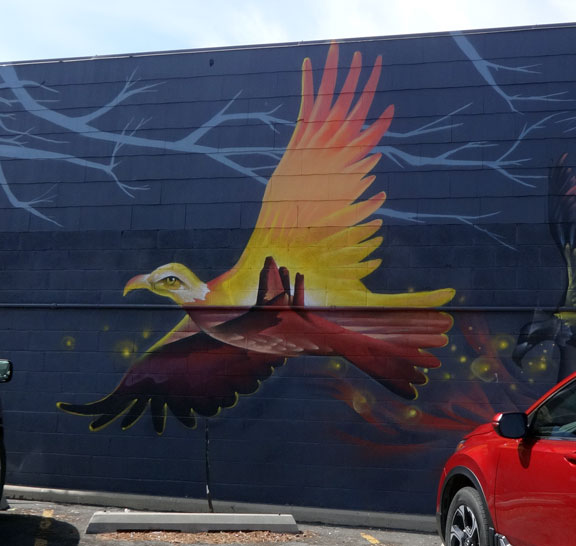 Saw this one as we headed out of downtown. It curved around into a parking garage 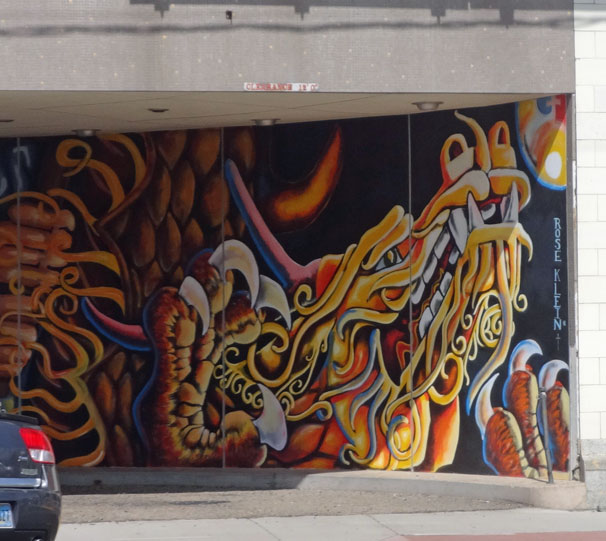 It is really a shame to see how many of these wonderful old downtowns are falling into disrepair. We were the only people walking and driving around down there.
Got really cold again last night. I'm glad we got our propane tank filled the other day. Can only use the furnace on propane not electricity...another thing for the RV doc repair list!
Bill took a nap after we got here to Vernal today. Don't blame him. And I watched a race. #18 won at Indy again.
Posted by Carol and Bill at 5:44 PM

Really nice how they've kept the town from looking derelict with paintings on the windows. Too bad everyone moves to the big cities but..they have to work to eat I guess. We've lived in Terrace (pop.25,000 incl.outlying area) since the 70's. Just the right size!