We were in Rawlins for two days so got to explore the town some. Except for the lovely Wyoming winds the weather was perfect.
The old downtown of Rawlins has been really well preserved. Some beautiful buildings there. Also we saw some grand old homes on the way to the Wyoming Frontier Prison [took a tour of it - whole other blog] And the town has an Art Tour to see the murals. We saw most of them I think.
Bill also called his older brother to wish him a Happy 90th Birthday! He still walks five miles every day! He told Bill you have to keep moving. Sure do.
A little history of Rawlins.  "A Drink of Good, Cold Water
In 1867, while in command of the troops protecting the crew surveying the route of the first trans-continental railroad, General John A. Rawlins (chief of staff of the U.S. Army) expressed a wish for a drink of good, cold water. A detachment of scouts explored the countryside as they rode west and approached the hills that stand guard over the present city, and they discovered a spring.
General Rawlins declared it was the most refreshing drink he had ever tasted and exclaimed, "If anything is ever named after me, I hope it will be a spring of water." General Grenville Dodge, commander of the survey party, immediately named it Rawlins Springs and the community that grew around it bore the same name. Later shortened to Rawlins, the town was incorporated in 1886 and was designated the seat of Carbon County. Carbon County - Historically, it has been traversed by the Overland Trail, Oregon Trail, Mormon Trail, and both the original route of the Union Pacific Railroad and the Lincoln Highway."
Sunset last night. 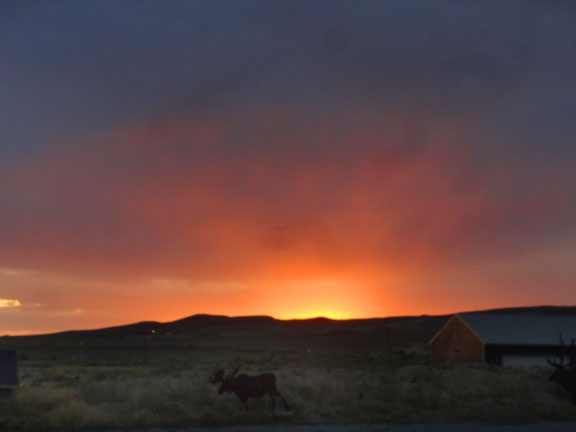 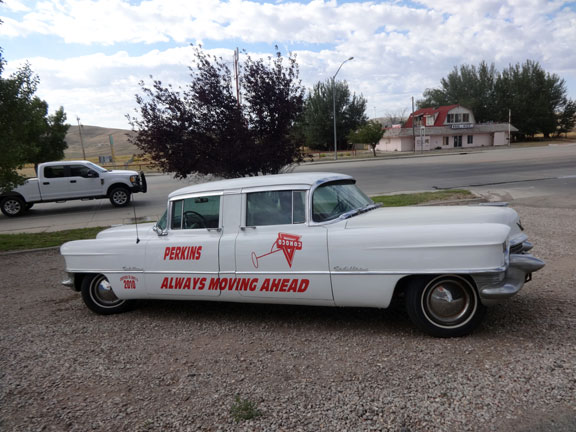 CATTLE KATE
Ella Watson, known as Cattle Kate, and her husband Jim Averell were lynched on July 20, 1889. The left panel of the mural shows a map with significant places and events in their lives. The tree on the seam of the left panel gives more information about their story. The right panel depicts four of the men involved. Cattle Kate looks down from the rocks viewing the place of her death.

Antolik Mural
This is the original Rawlins mural painted by Jerry Antolik. Painted in 1987. It depicts a menagerie of animals gathered around a stream. There are several hidden animals throughout the mural.

Historic Downtown
Mural by Peggy Colson takes us back in time. It shows the sight seen in the 1940s.

Four panels depict the treacherous trail taken by Mormon immigrants while pushing handcarts to their new land. The Martin Handcart Co started the trek late ad was trapped 50 miles north of Rawlins where than 150 of the pioneers died of exposure and starvation during the blizzard of 1856. The panels focus on the children and the rescuers. 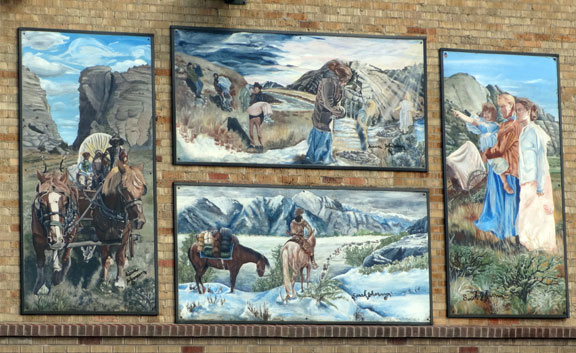 We went in to a bank that was full of wonderful art. These antelope were right inside the door. 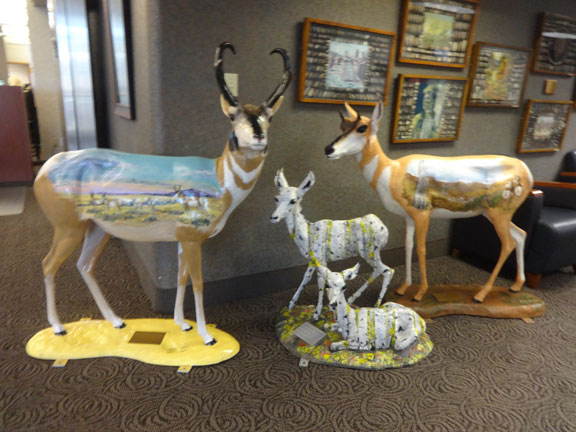 A couple of large paintings on old wood. 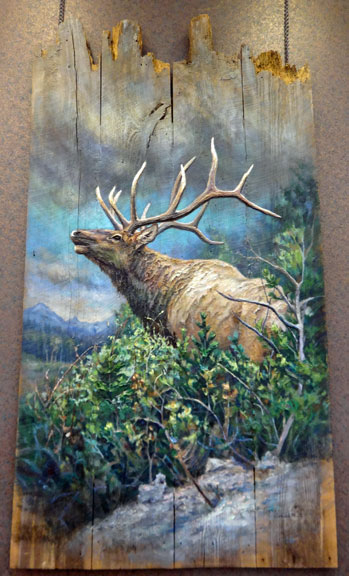 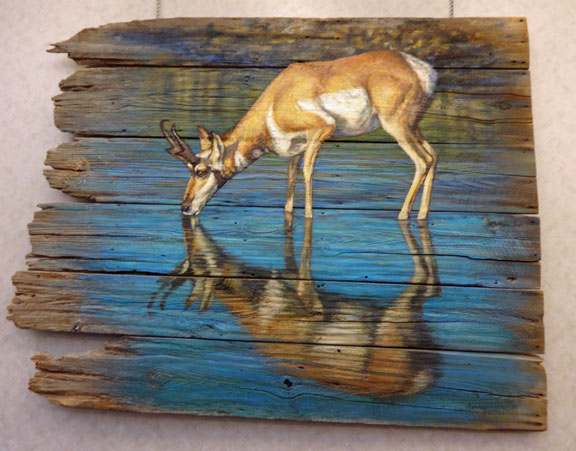 There were about 25 of these pictures that used all sizes of arrow heads to surround a picture. One of the ladies in the bank told us that an old hardware store close. When the new owner found all of these he donated them to the bank. 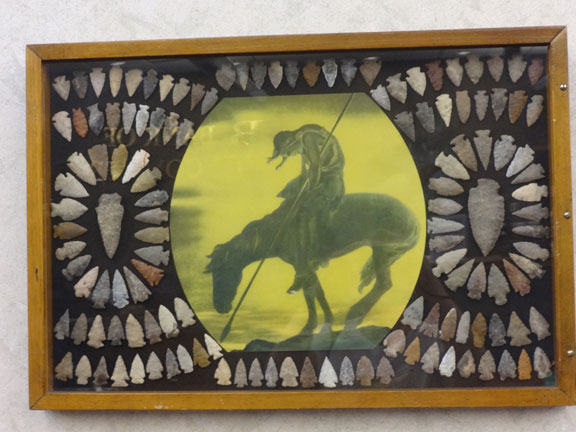 ASPEN ALLEY
This was outside of the prison. . A grove of aspens through the seasons. 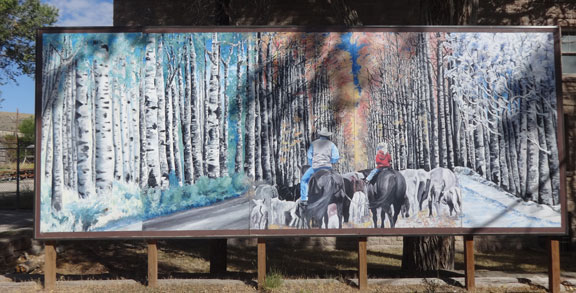 On the wall of a laundromat. 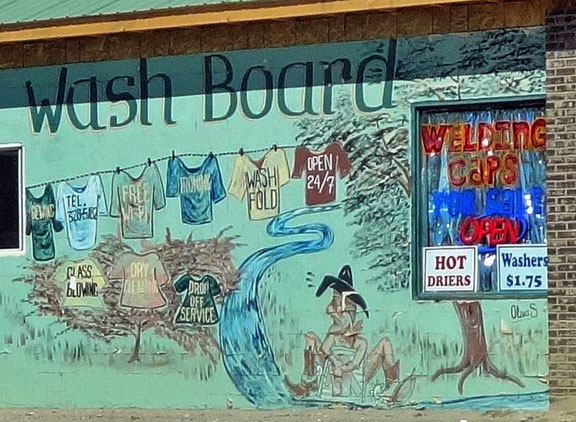 BIG NOSE GEORGE
Scenes from the life of one of the most notorious outlaws of the County. 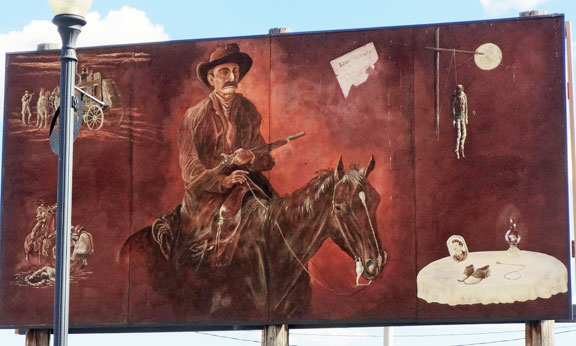 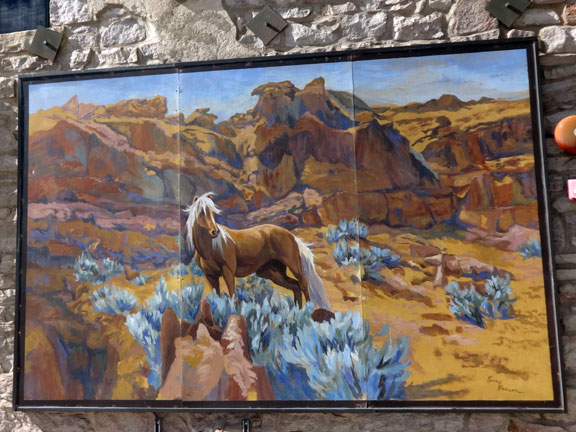 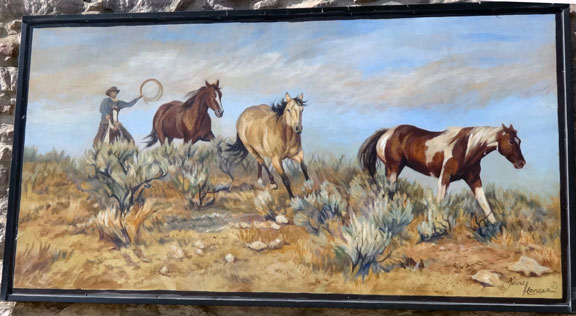 Navigation
Navigation is created on the idea of bringing the sky into downtown. 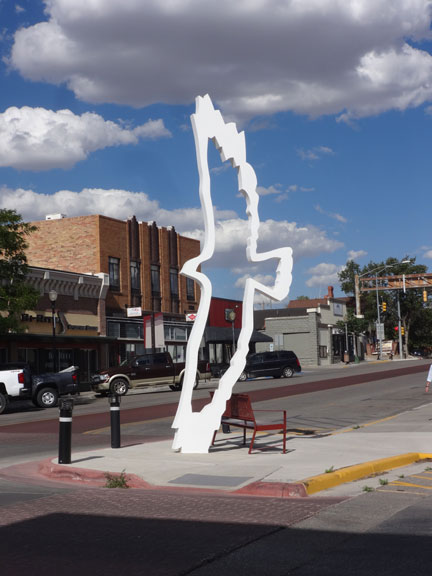 Saw these at a little park. Bill parked and I jumped out to take the pictures of the murals. Didn't notice the deer until he moved. Yes he is real. Just watched me. 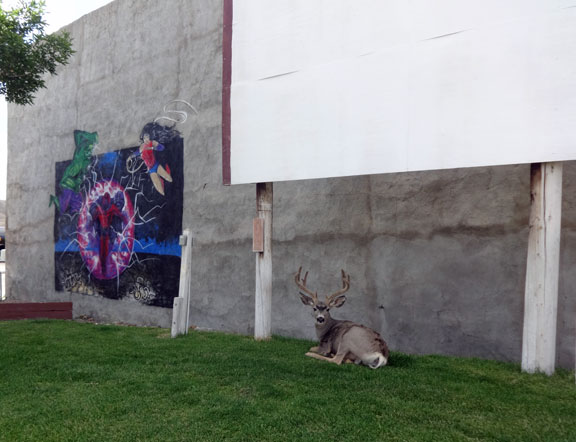 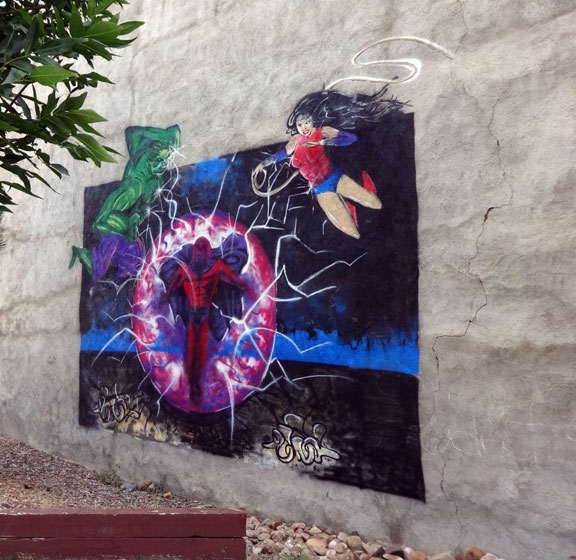 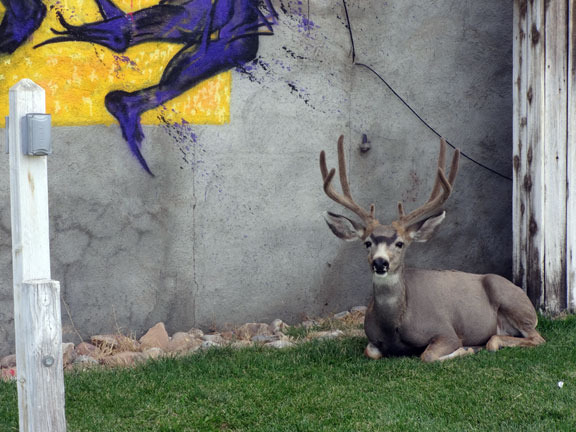 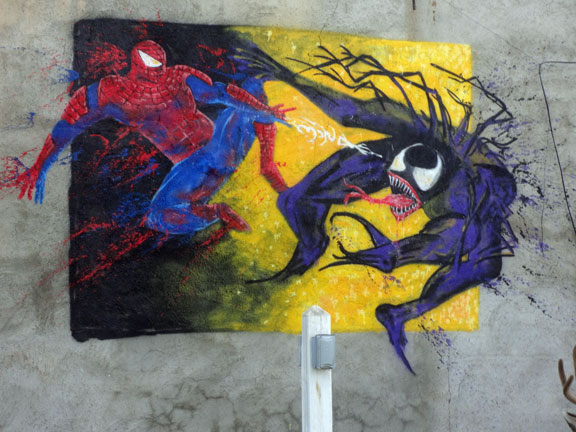 And the last one we found Thomas Edison.
The moment when the light came on for Edison. When he was visiting the area in 1878 he went fishing. As he cast his attention was drawn to the fiber lie of his pole which he went on to test as suitable filament for the incandescent light bulb. 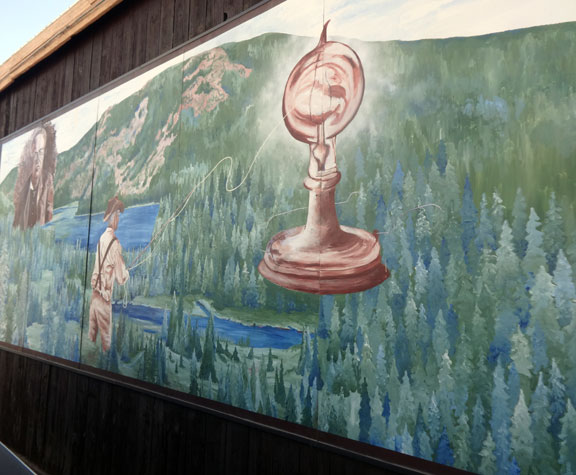 We are now in Rock Springs, WY. Will be here for a couple of days, but am having to use my MiFi to post so from now on they will be shorter. Enjoy the murals.

Email ThisBlogThis!Share to TwitterShare to FacebookShare to Pinterest
Labels: Historic Downtown, Mural by Peggy Colson takes us back in time. It shows the sight seen in the 1940s when

It is so much fun driving around these small towns looking for the murals. And the older buildings.