Vernal is a cute town.

Just didn't feel like posting yesterday. One of those lazy days. Also it was cold and raining most of the day - ugh. It did clear up for a while in the afternoon so we jumped in the Jeep and went to eat, pick up a few things from WalMart and take a little ride around town. Discovered this mural by accident. Love it! 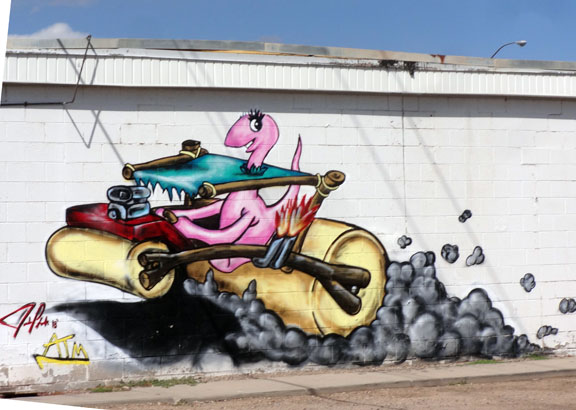 Walked through a bautiful park on the main street next to the cities library, courthouse and another museum. Thought this was interesting. Hard to read it says,

"A knowledge of the past
Makes understandable the present
And serves as a guide to the future." 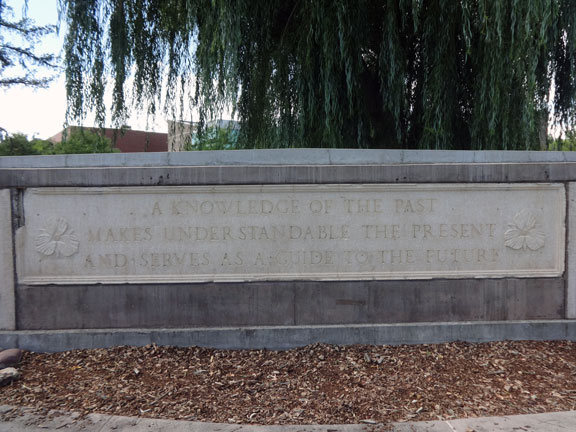 And more dinosaurs in the same park. 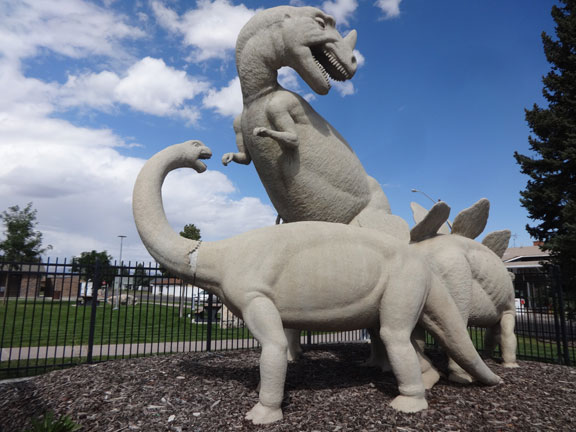 Statue of a soldier. Shielded by an eagle with his wings spread out. 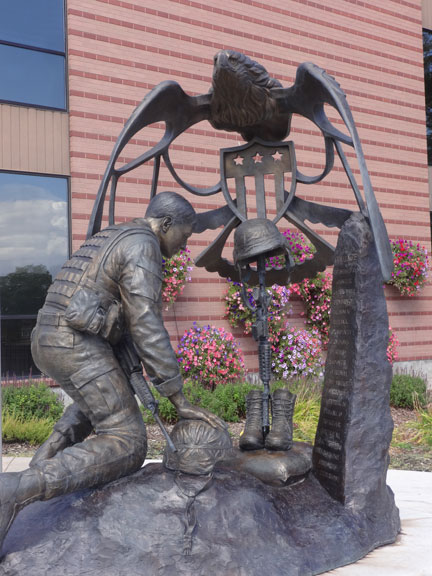 There was also a large memorial to the towns Veterans will post it another day.
We went to the Cobbled Rock Arch park to look around. This is one of the entrances. Old movie theater in front, looks like they use it for plays now. 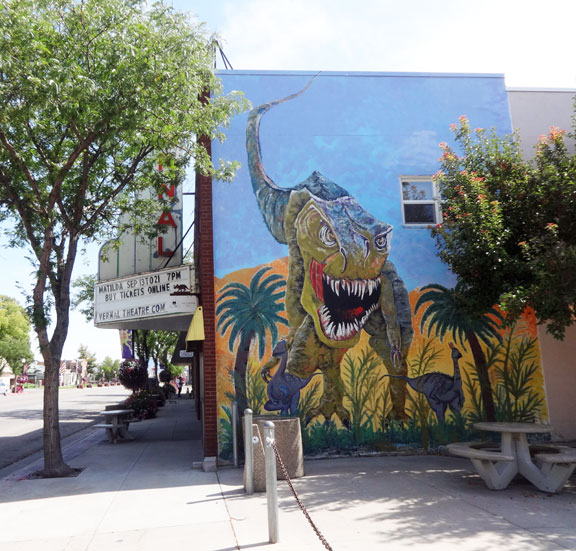 I know! More about the flowers. The Jeep is parked about a foot and a half away from the bottom bunch. Give an idea how big they are. 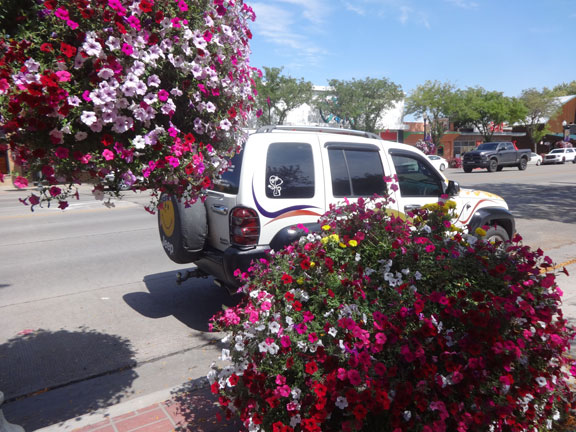 Walking in to the park. Of course, another dinosaur. [at least I'm learning how to spell dinosaur.] 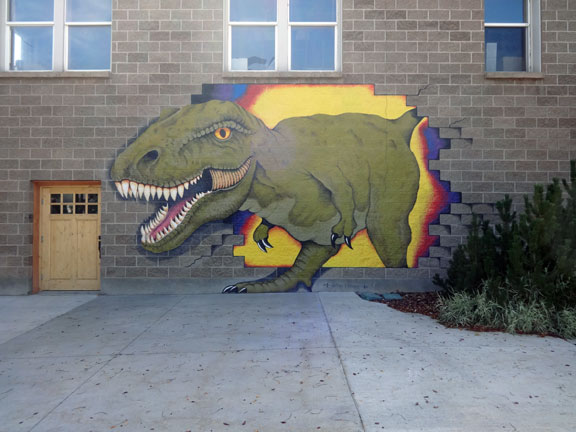 The front of the park. 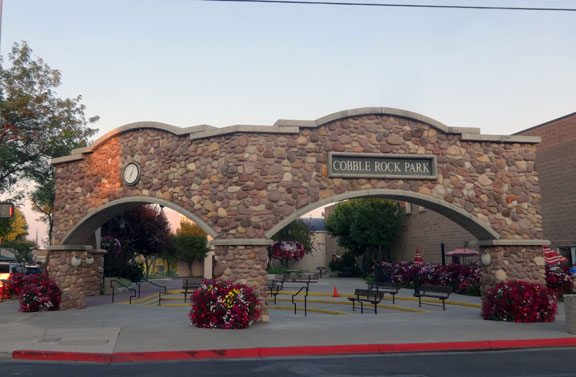 Much to our surprise we learned that it was originally a GAS STATION. See the statue in the middle of the road - far right of picture. It is now in the Veterans Memorial park. 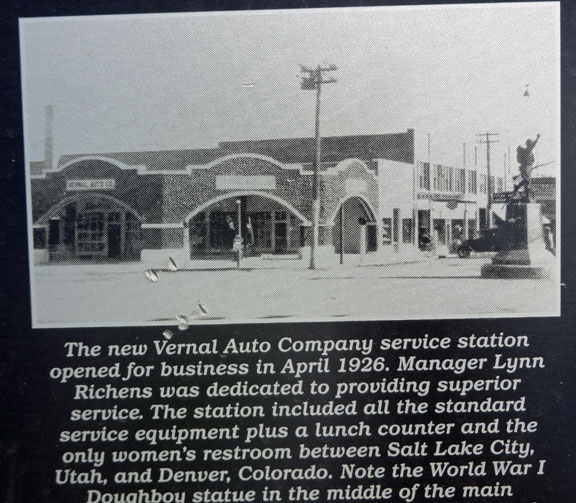 Glad they kept or replaced the Cobbled Rock  Arches. 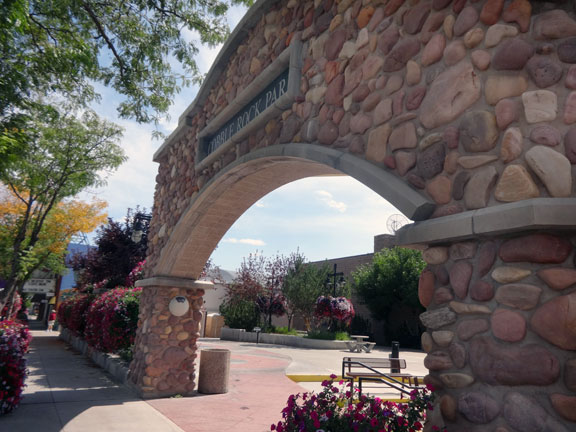 Some information in the park. This is really a great little town, we can see how much it is growing and it is retaining its original downtown too. The city puts out all the flowers and takes care of them. We finally asked someone about them. 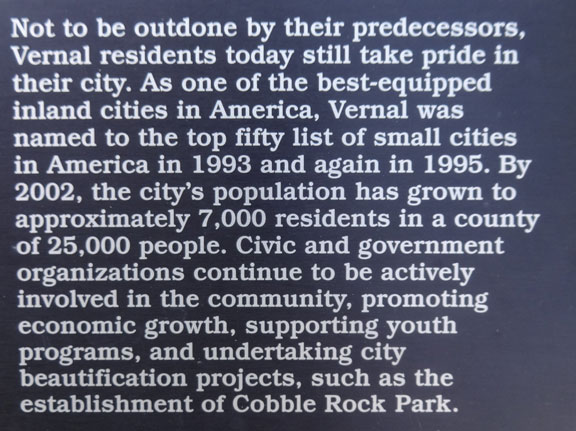 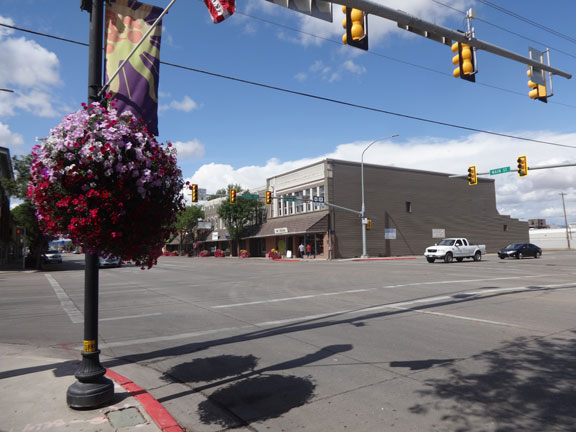 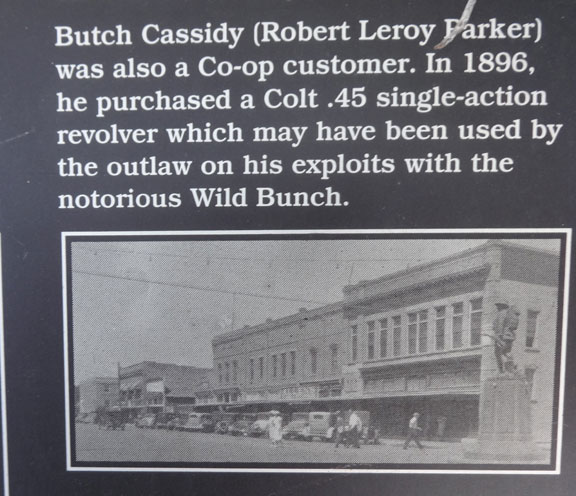 Both of my poor old Sony cameras are now giving me problems. The oldest has been touchy for years - the zoom doesn't want to retract and it is having trouble focusing. The newest - about 5/6 years old is now doing a bunch of strange things. When focusing on a subject it jumps so I only get half the picture...also jumps when filming a video. First thought it was my hands shaking but it is the focus jumping. Also it is turning about 60 percent of the photos on their side when it takes them. So to use them I have to rotate the pictures back to normal. So first thing when we get home will be getting new camera. I know what I want a Sony Cybershot HX80. Sounds like it will do everything I want.
Today we hope to go see the Indian Petroglyphs - we are waiting for the dirt roads to dry up some. And it is on private land so Bill might be able to take up his drone.

Last year I bought a Panasonic Lumix ZS50. Hugely difficult to pick a new camera these days and what I picked is similar to what you want. I really like my old Canon and would buy it again if it was available (scratched lens.) I find the Panasonic a bit slower on start up for quick photos. You take a huge amount of photos so 5-6 years is good service.

Never thought I'd wear a camera out. Be interesting to see if I like a new one. It sounds like what I want.

Have so enjoyed a return visit to Vernal, Utah through your photos - that town is nothing like I remember. Your pictures of the digs look very similar to the ones we took years ago. How the kids enjoys touching and having their picture taken next to the dinosaur bone. As you say it is a very pretty little town. Thank you for sharing so much with your readers.

Wise were trying to figure out when we were here the first time. We had all our kids with us so it had to be at least 46 years ago. It was only a few blocks long then.