To continue our trip to San Carlos, left off here yesterday in Cibuta 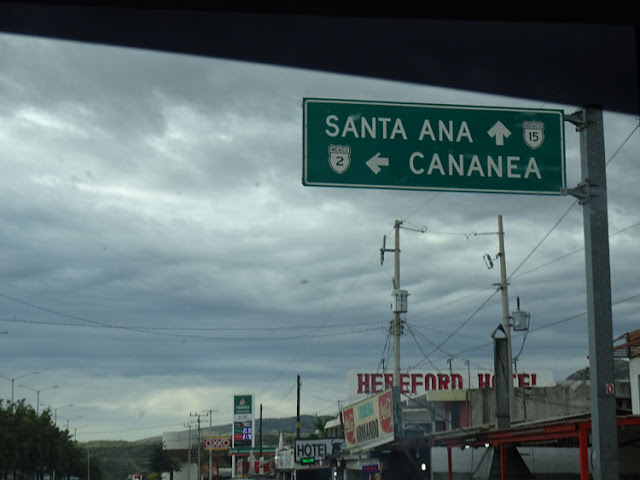 He sure has a load. 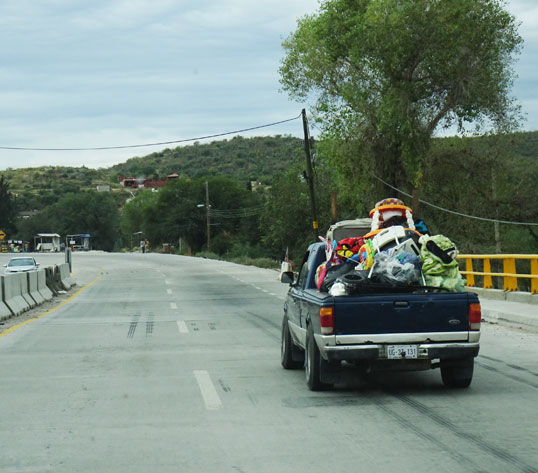 Nearing Imuris. More topes, watch for the people selling things, there is usually a tope there. 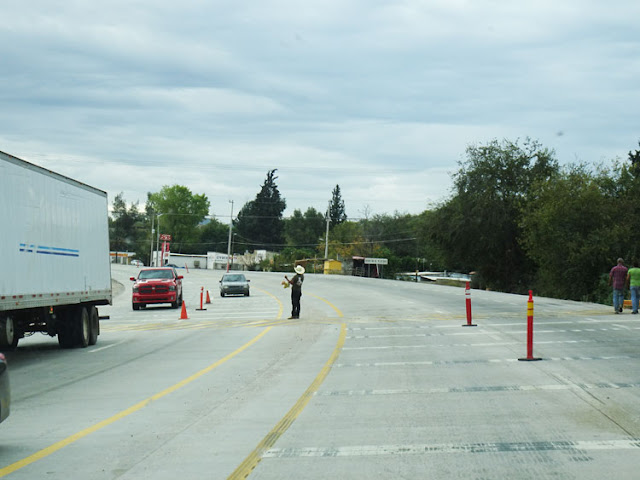 Just looks like rain in the distance. At one time we got a few drops on the windshield. 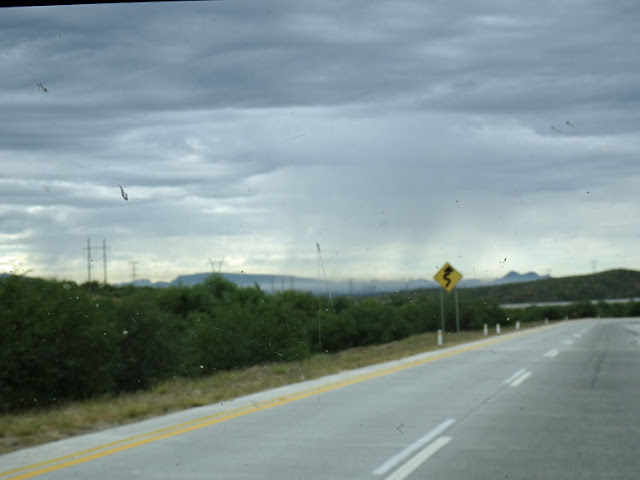 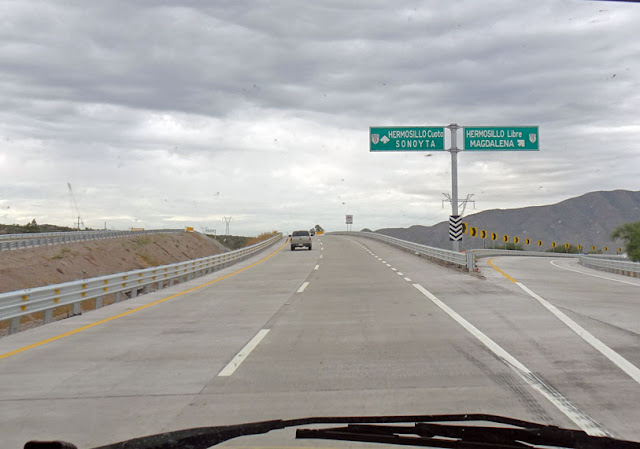 The toll booth on the Magdalena bypass is not collecting tolls. There were people there with a collection can, but we did not contribute. Just drove on through.
Just north of Santa Ana more sharing of the southbound lanes. 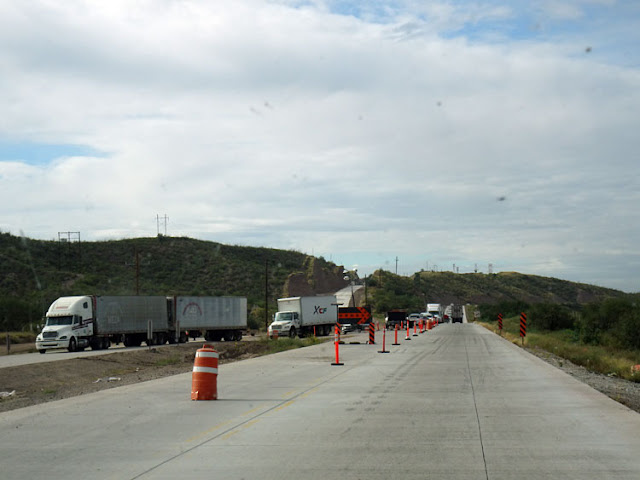 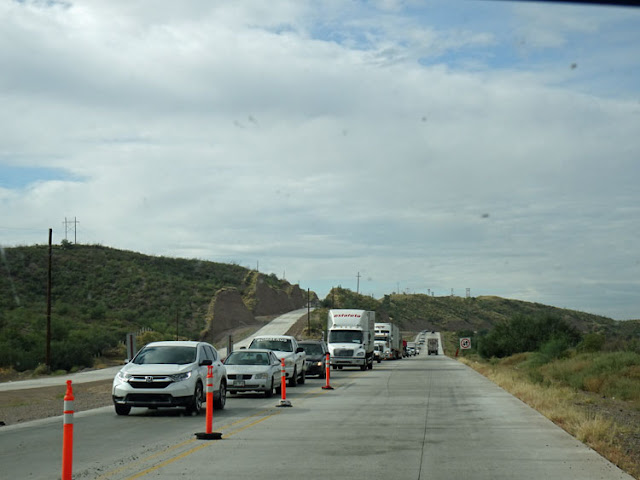 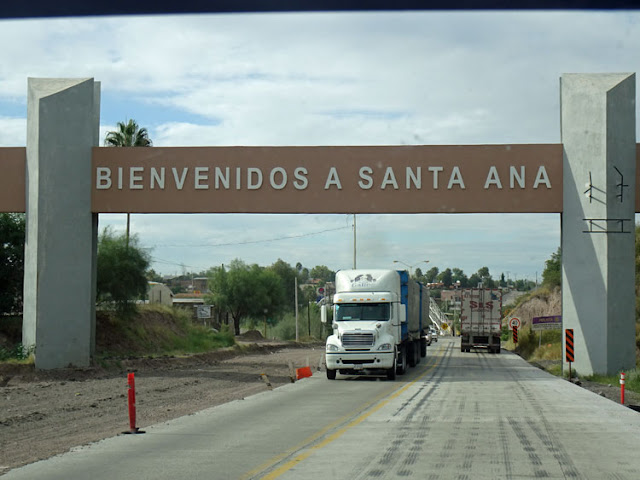 "Edgar and Ana's" RV park real name is Punta Vista RV Park. It is being kept open and improved by Edgar's sister. It is at the south end of town just before the pedestrian overpass. 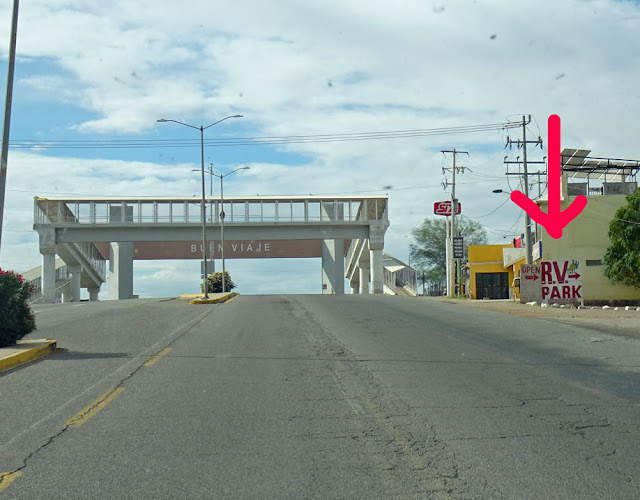 Nice road from here to Hermosillo 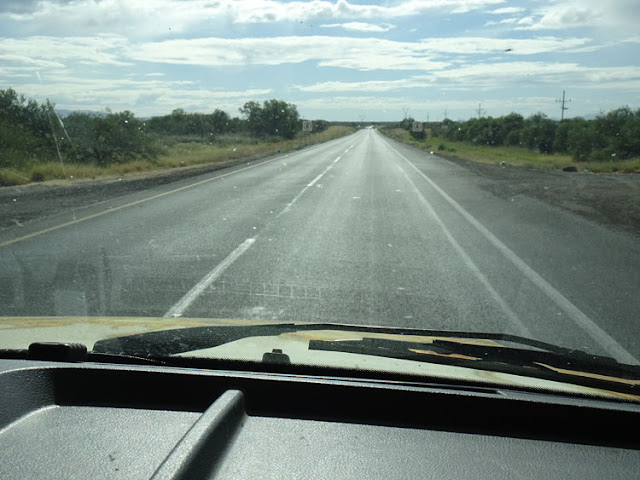 The toll booth right before Hermosillo also has people collecting the money, no tolls. We donated 20 Pesos here and asked the lady about the bypass. She told us the signage was good and it was just ahead. 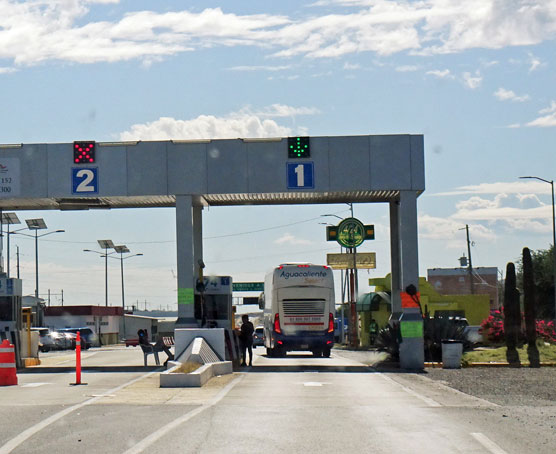 Coming up to the Hermosillo Bypass. Click here to review the video. The first of many yellow signs. 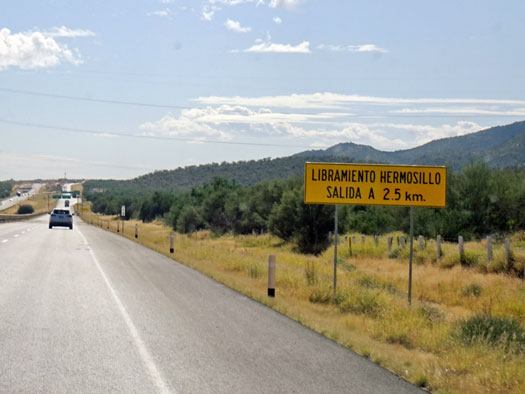 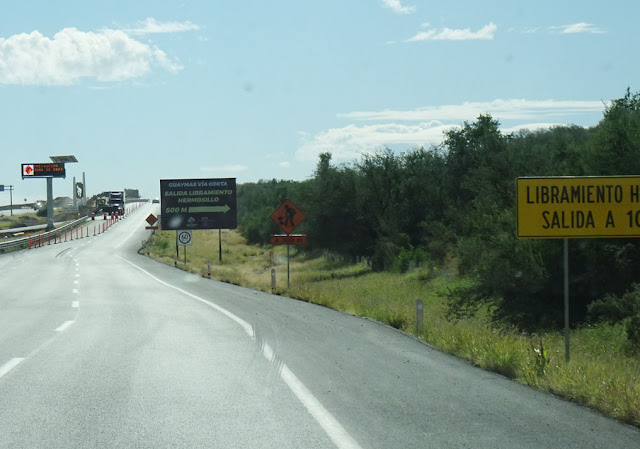 When you see the Indian you are very close. I suggest reviewing the video because even though the signs are clear - the optics are confusing. 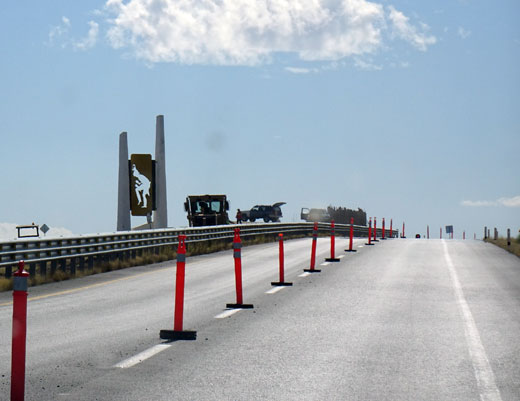 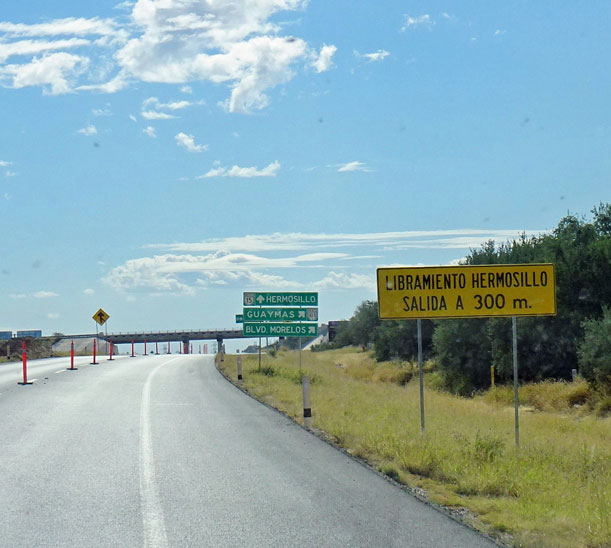 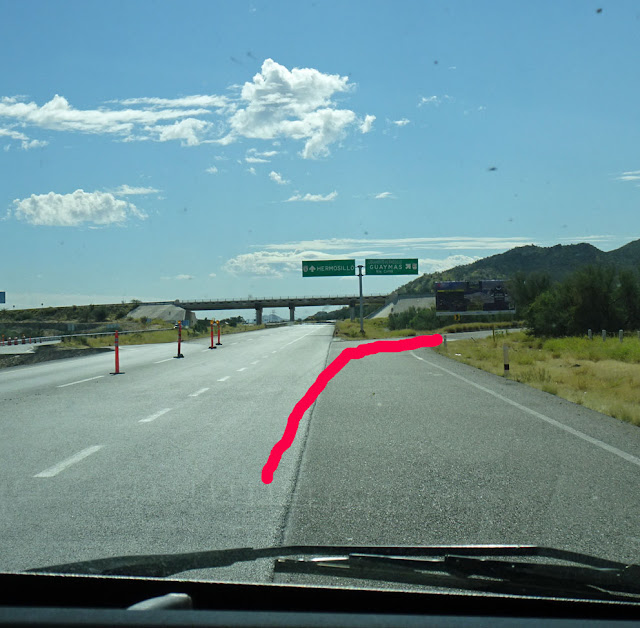 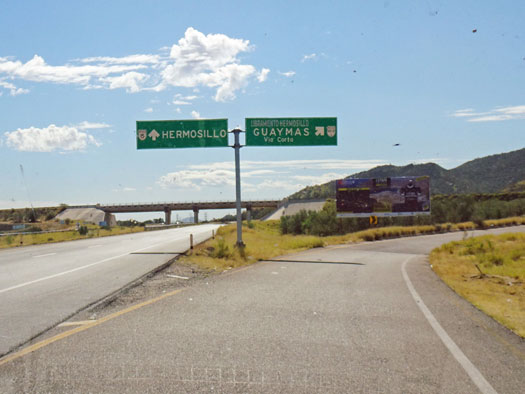 If you've watched the video you know you have to make a U turn to the right almost immediately. You can see the sign - BUT it looks like the area is blocked off by the orange cones, until you get right up to it. Do not worry about the orange cones. 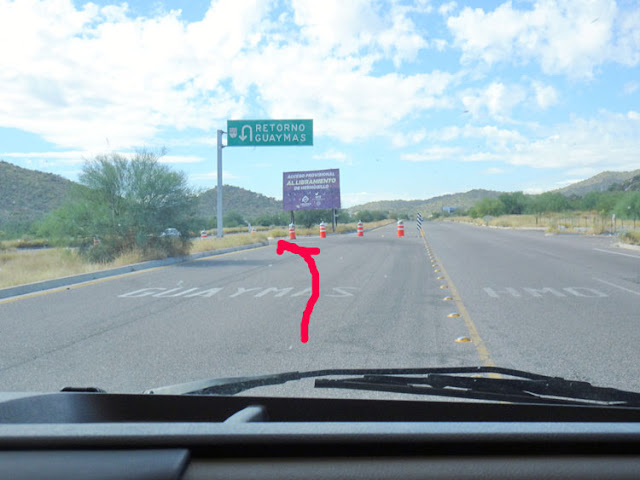 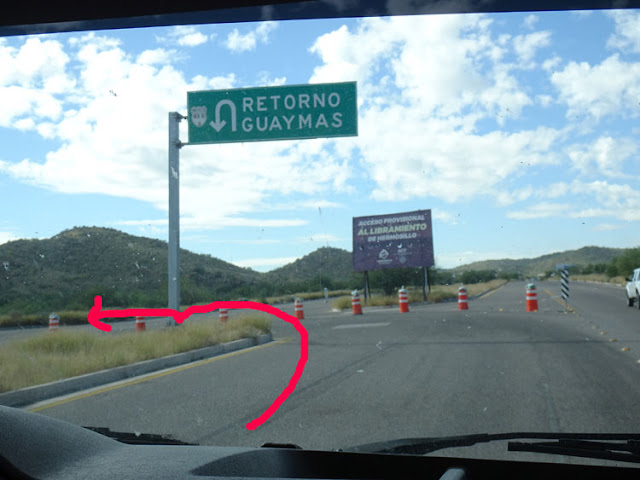 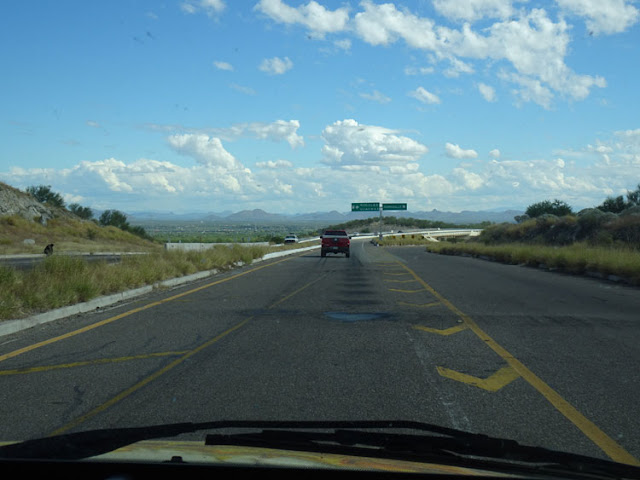 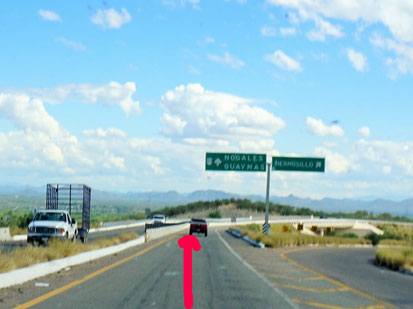 And another turn, go right or you'll end up back where you began. 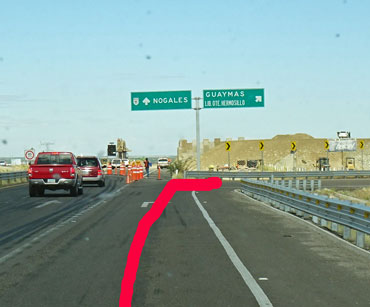 Finally on the bypass. I hate to say this but the concrete poured at the beginning of the  bypass is like driving on a washboard. So take it slow.  It gets better. 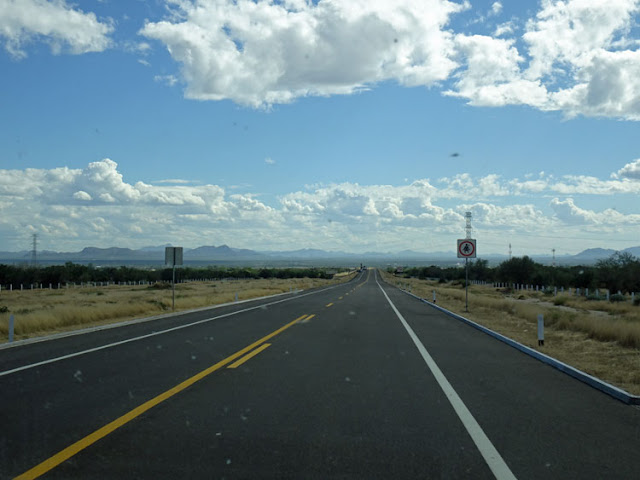 Careful don't go back to Hermosillo! 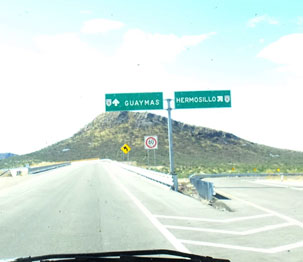 Quite a ways into the bypass is a toll booth and they are collecting tolls. We are driving an RV pulling the Jeep so usually get charged for a car and a truck or bus. I checked the sign. 113 auto and 250 bus. I know the toll collector saw the car as he was standing outside the booth waiting for us [there is not much traffic on this road.] But he only charged us for the RV 250 Pesos. About U.S.dollars $13.
This is "kind of" the bypass. A lot of it is older roads connecting different areas. The blue line is 15D, the red is the bypass. I checked our mileage last year from Amado to San Carlos it was 284, this year using the bypass it was 288 - 4 miles longer. It used to take us 35 minutes to drive through Hermosillo. This time it took 30 minutes from when we got on the bypass until we got off it. But sure was easier on the driver. 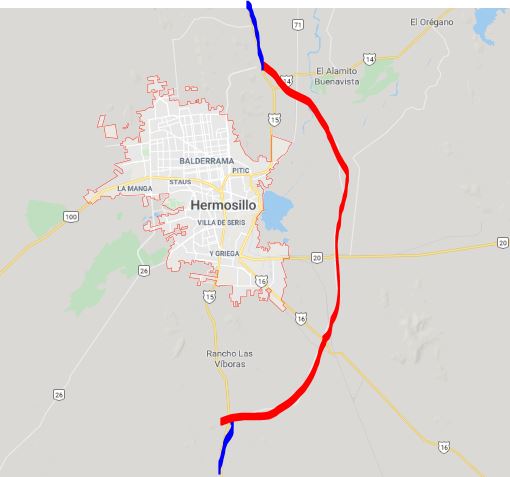 The construction is finished by the gas station where the road splits to go to Obregon or Guaymas and San Carlos. There is a returno that will take you into the gas station. 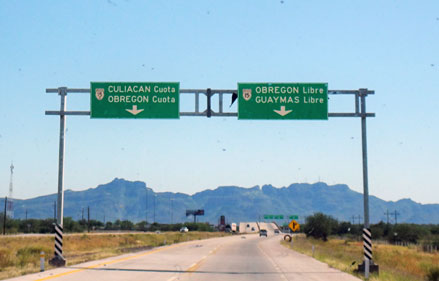 And here we are at La Palapa on the beach enjoying Fish and Chips and the beautiful weather. 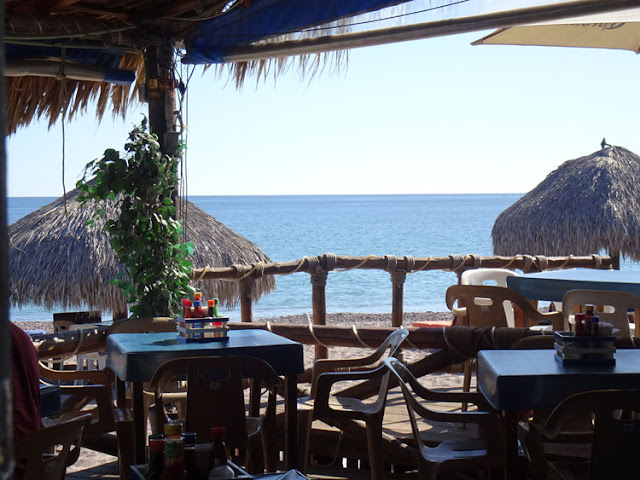 We are staying at Totonaka RV Park in San Carlos. Full hookups, all back ins. WiFi is fairly good and they have a five channel cable TV hook up. We got the weekly rate cause we will stay here for the week. There are plenty of spaces available.
Posted by Carol and Bill at 2:19 PM

Another excellent write up. Thank you for doing this. I will add it tom post tonight. I guess I will have to take over from here. Fingers crossed that we arable to get out of Tucson Thursday morning. I have some input tonight as well from a Lukeville crossing today.

Went into Las Jaibas on Monday..pretty quiet. Nobody out back! To the north lots of houses...to the south still construction. Really hot and humid till yesterday now wind, cloudy and a threat of rain. Still lovely and warm.

so many people won't be there this year. It rained/dripped here last night, just enough to make clean Jeep dirty again.

thanks for sharing the post. we always go to that restaurant right after we get set up. So pretty. Hope things come together for you today. Totonaka is about 3/4 empty. very few rigs here this year.