Yesterday morning we went to one of our favorite restaurants here in San Carlos - Chihuahuas - for breakfast. I had French Toast, Bill had eggs, ham and beans. 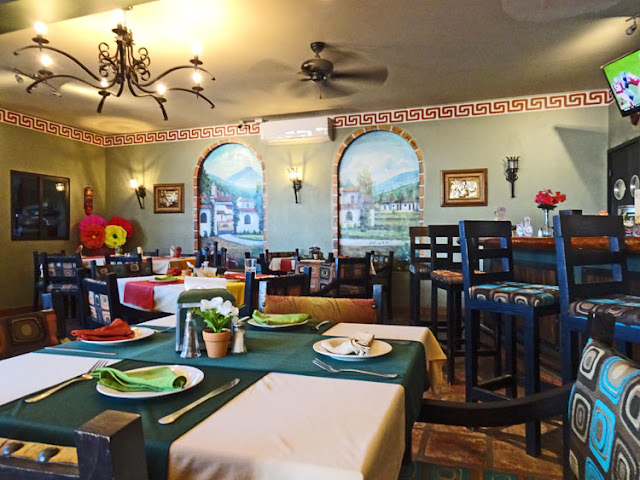 Then we drove into Guaymas, the city just south of San Carlos. As usual a lot of traffic on the main street. 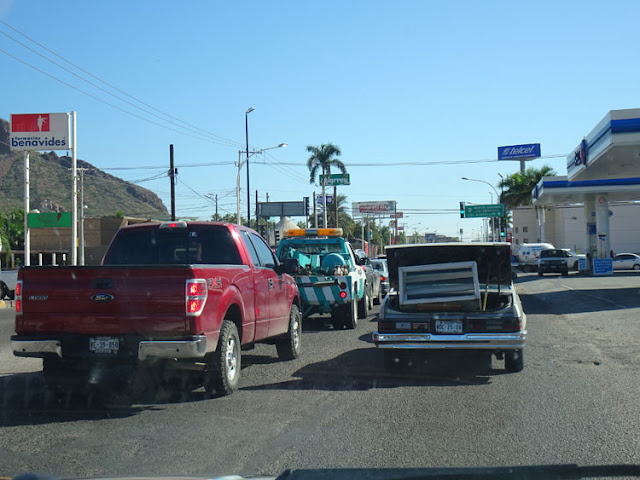 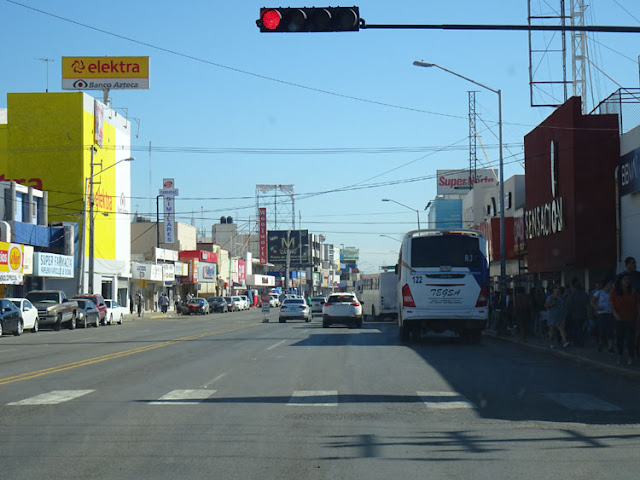 The guy with his back to us was trying to sell and the lady didn't want what he was selling. Some kind of honey I think. 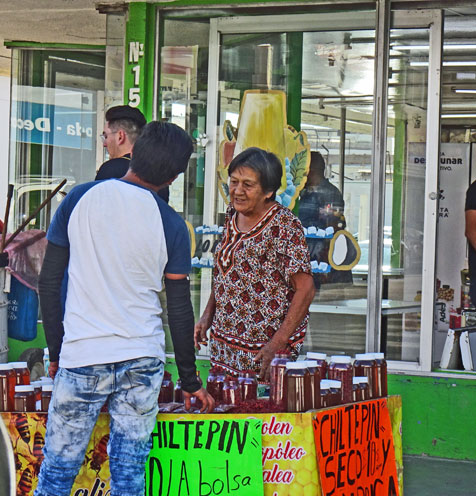 He is just starting to set up his stand The entire street/sidewalk is lined with small booths selling something. He has hats. 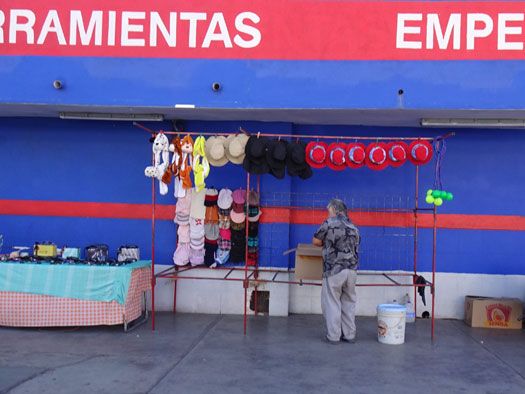 One of the beautiful old buildings on the main street. Every year it continues to deteriorate. What a shame. 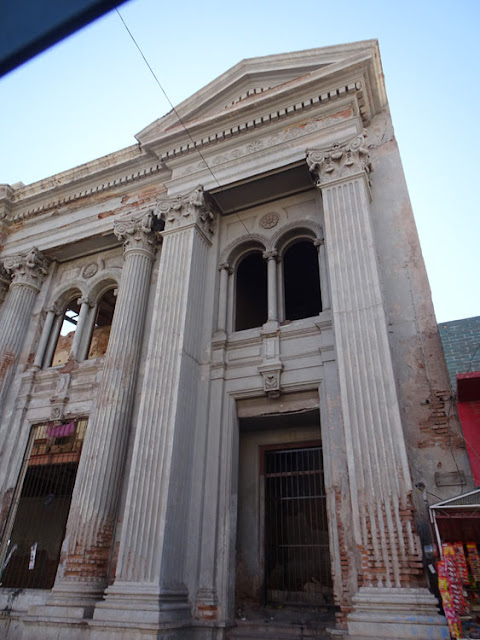 And this one used to be  beautiful. I guess the barricade is to keep pieces falling off on to people walking by. Doesn't look like it is being restored. Hope I'm wrong. 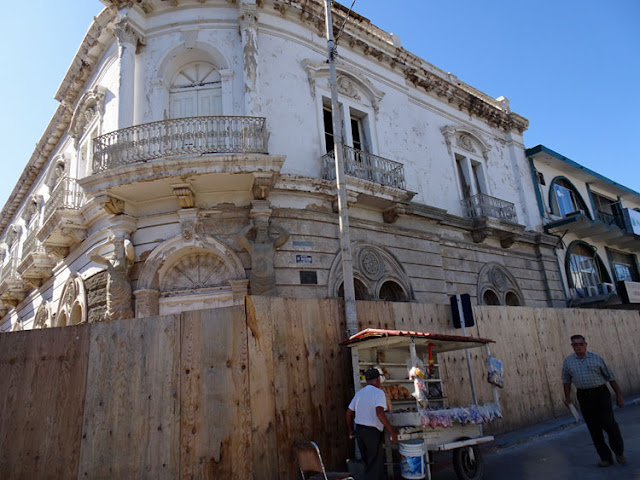 Went down by the harbor. This is a nice walking area with benches and lighting. 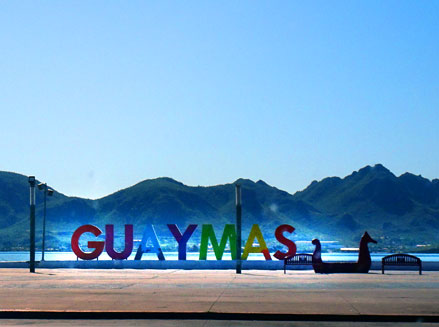 Continued along the Malecon along the harbor and discovered a great family fun area. This is the skate board park. All the backs of the ramps had paintings on them. Some were very intricate. 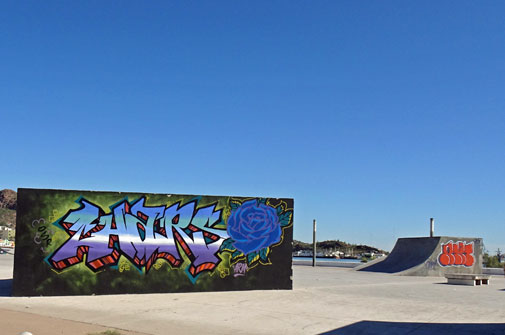 All were signed by the artist. 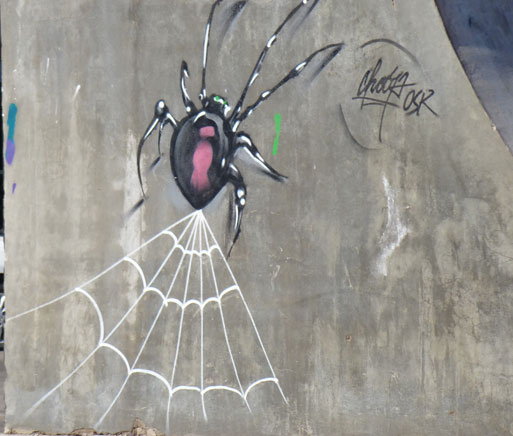 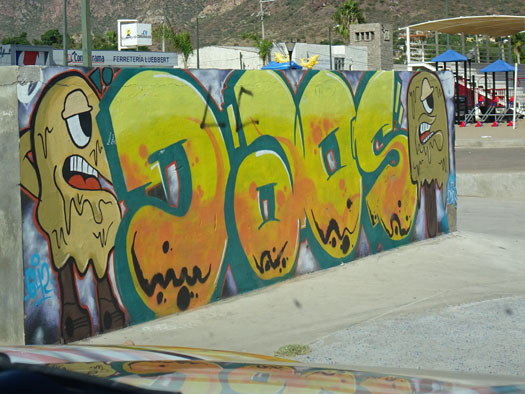 Lots of colors in this one. 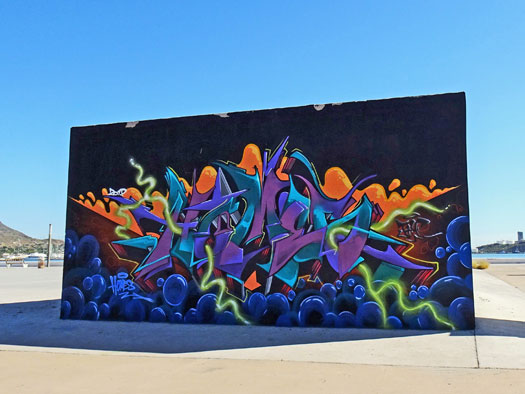 Next to the skate park was a playground and a soccer field with seating. 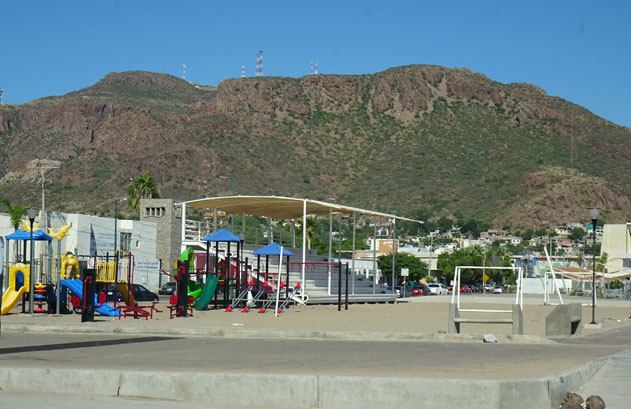 Heading back towards the main street. He has about four cases of plum tomatoes on a dolly - going to take them somewhere. 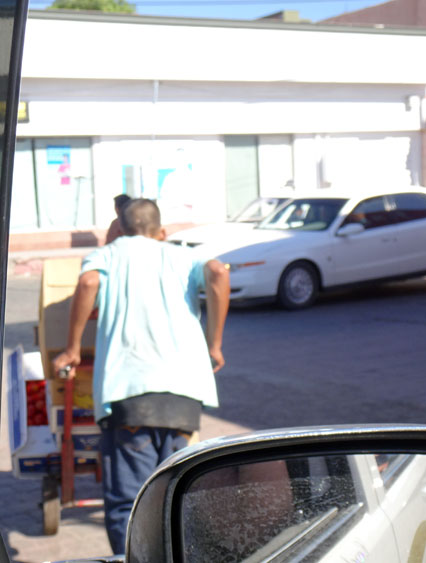 Don't know if he is selling the pots or just bought them. I think selling them. 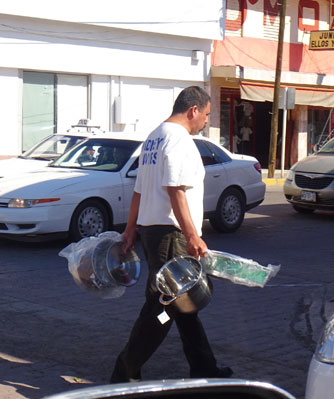 Interesting paint job, I think it is a night club. 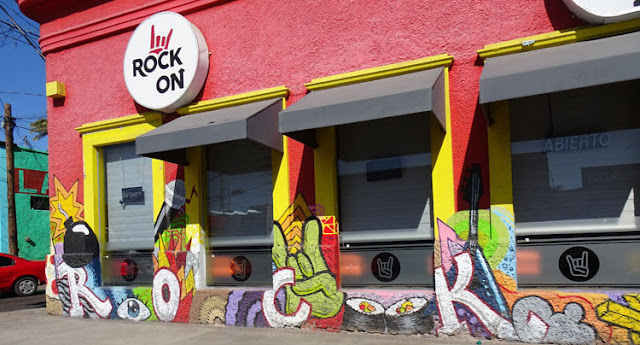 An upholstery shop, the door is open so he must still be in business. 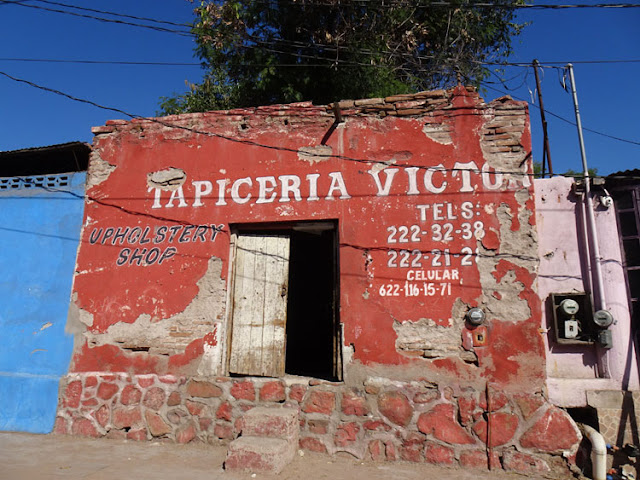 Talk about RED - you can miss these coffee shops. Oh, I just noticed the sign, Cafe De Olla, I love it. 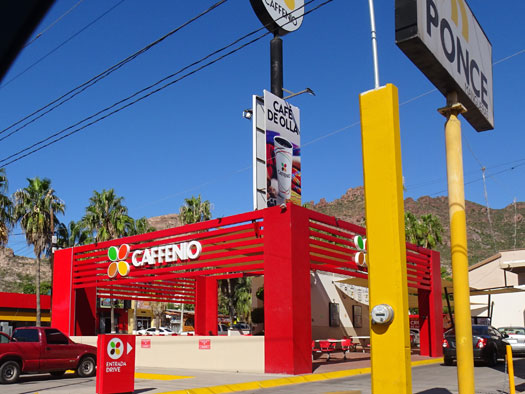 A couple of years ago we had a slow leak in the Jeeps tire fixed here. No fancy machines but he got the job done and it is still holding air. 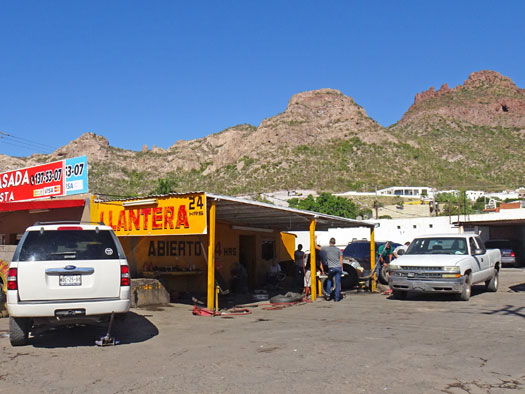 I found Waldo, he moved to Guaymas. Bill wanted to get the Jeep washed so we went to Sam's Club and Walmart. There are several guys in the parking lot with mobile washing equipment. They do a great job 60 Pesos = less than four dollars.
This is in Sam's Club. We use our US card to get in and for purchases. Not unusual to see nuns in habits here. 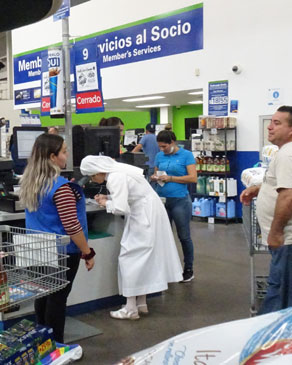 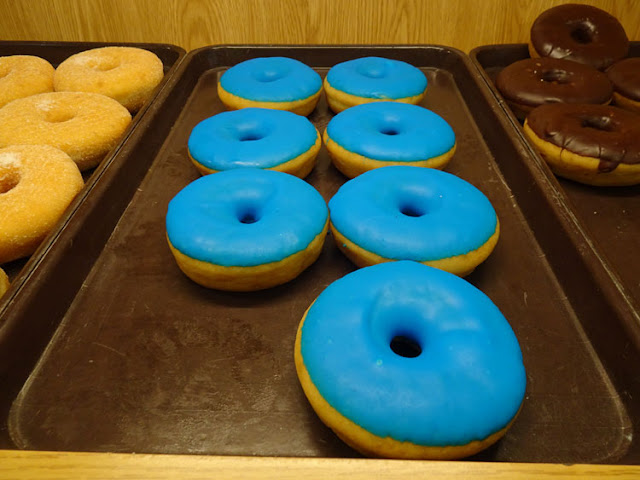 Looking towards the produce section. Just like home. Picked up a few things. 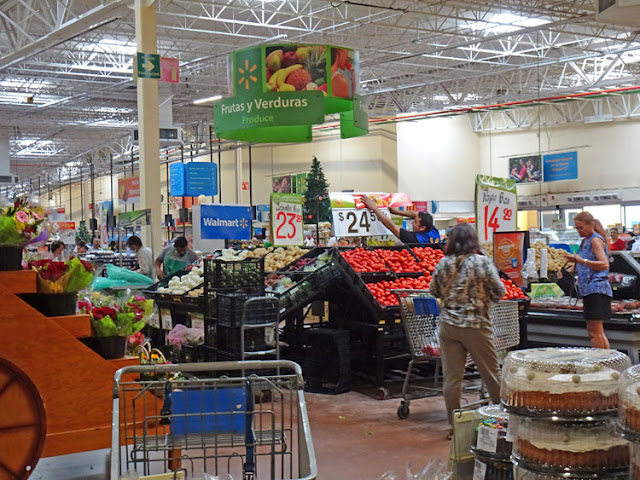 We ate dinner at the Italian restaurant next to the RV park. I had spaghetti and Bill had Chicken Marsala. Very good 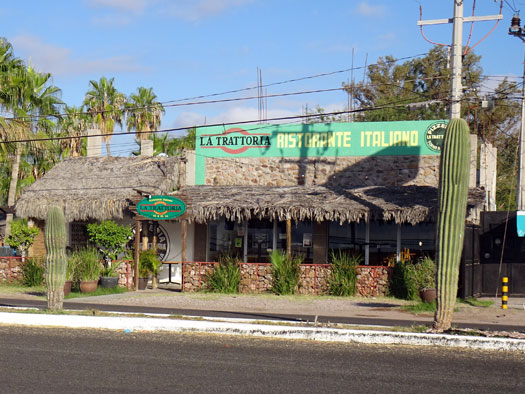 Rain and rainbows in the distance. 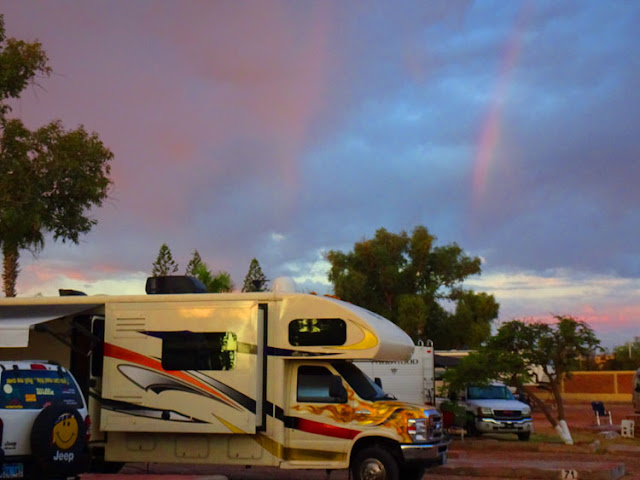 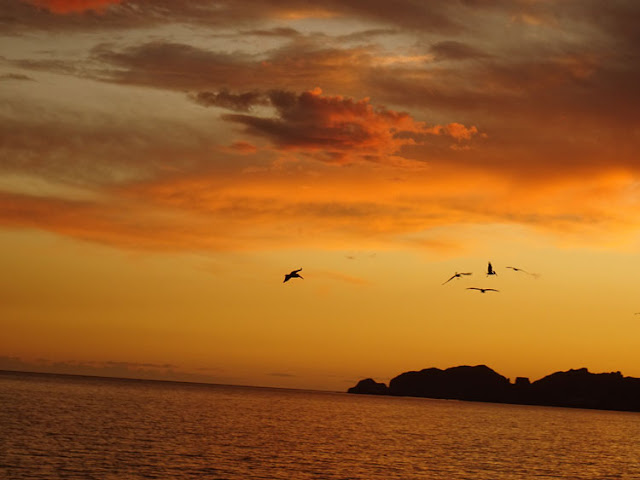 Wouldn't you know. It rained all over the clean Jeep last night.

Thanks for the tour of Guaymas our truck was too big to wander around in.

It is an interesting town. We'll be back over there a couple of times before we leave