We went to Torres a couple of mornings ago and for the first time this year the iguanas were out by the pool. The kids on the slide are fascinated and the iguanas could care less. 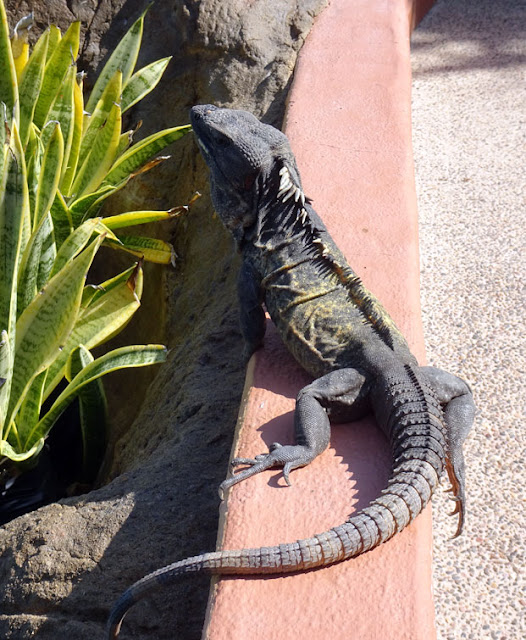 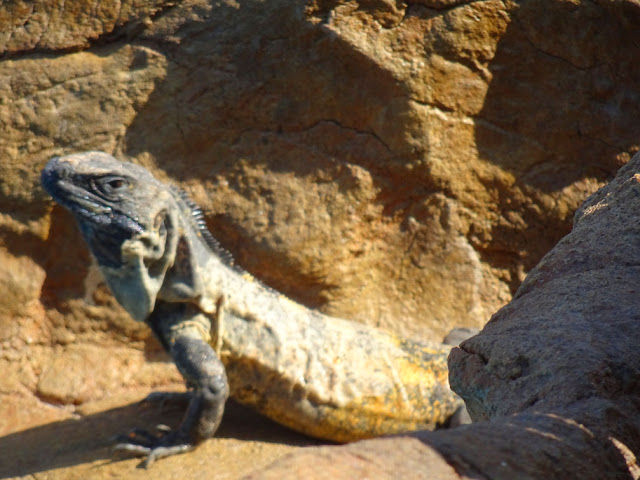 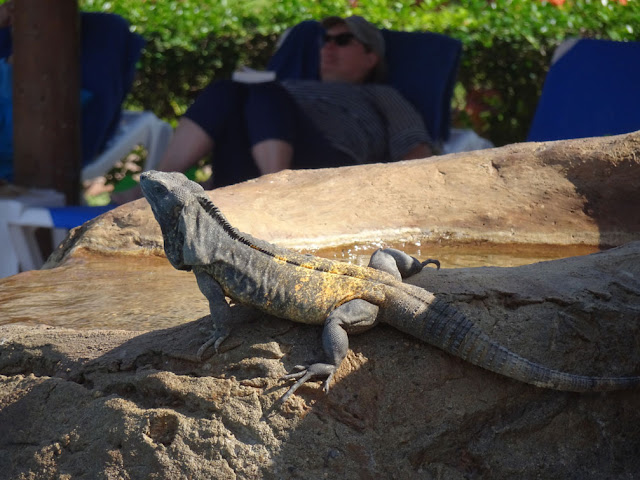 Starting to put up the Christmas decorations there. 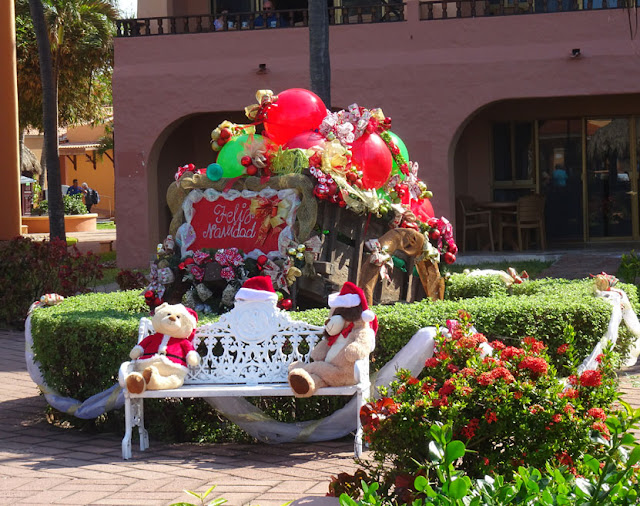 Then another morning we went to La Antigua, the crepe place, near us for breakfast. Bill talking to the owner. I was almost out the door before I realized he wasn't with me. 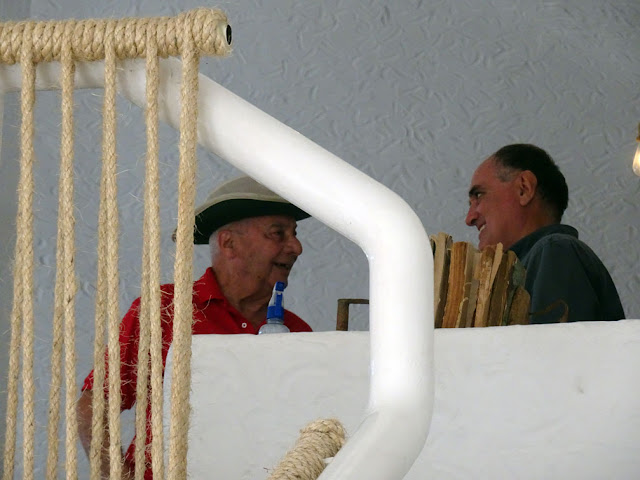 And yesterday the auto painter came over and painted the bumper on the RV. It was getting pretty gray looking. 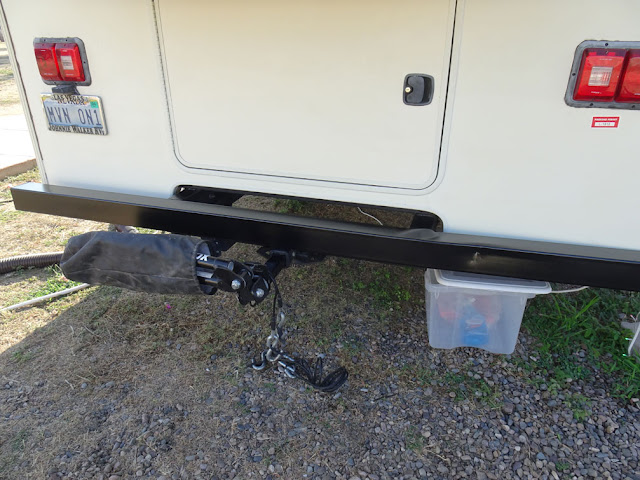 Last nights sunset, I thought it might be better. 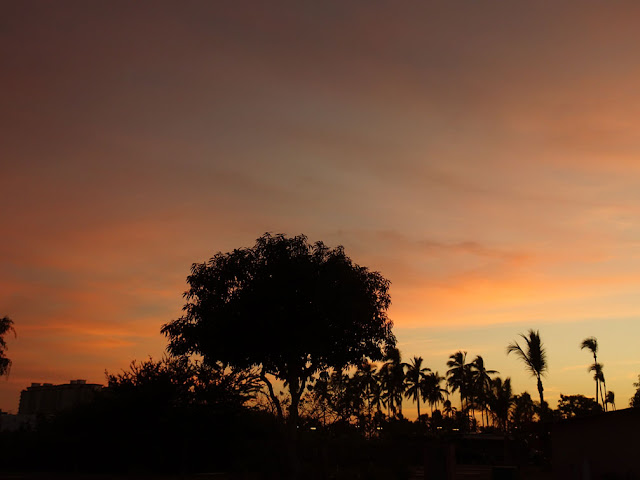 About five o'clock we decided to go to the Plazuela Machado for dinner and to check out the Christmas decorations and lights. We took a taxi over and back. Much easier than driving. A lot of the trees by the restaurants there have white lights in them. 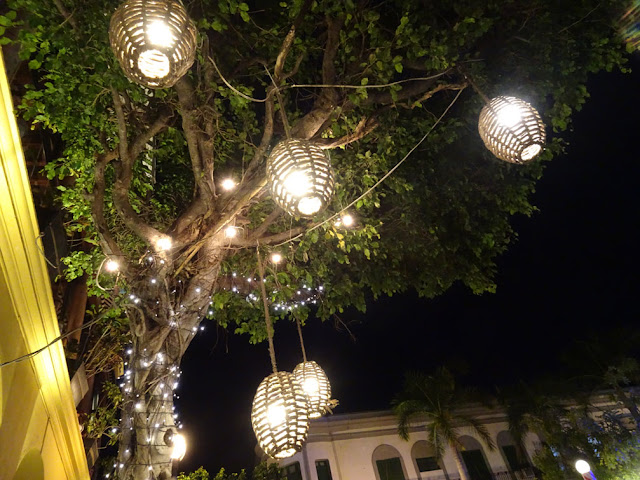 Enjoyed listening to this guy. He played until Rafael started playing. 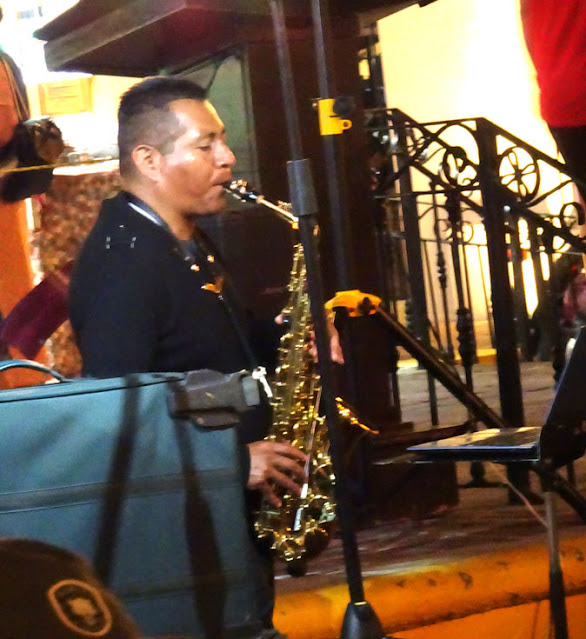 Lots of people in the plaza, eating and walking around. The flower guy with his lilies for sale. 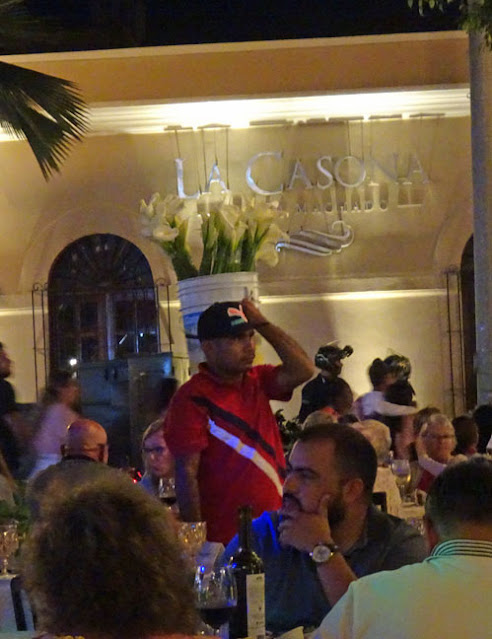 Of course the women were dancing. Love to watch them. Last night Rafael played a lot of music that didn't require a partner to dance with. 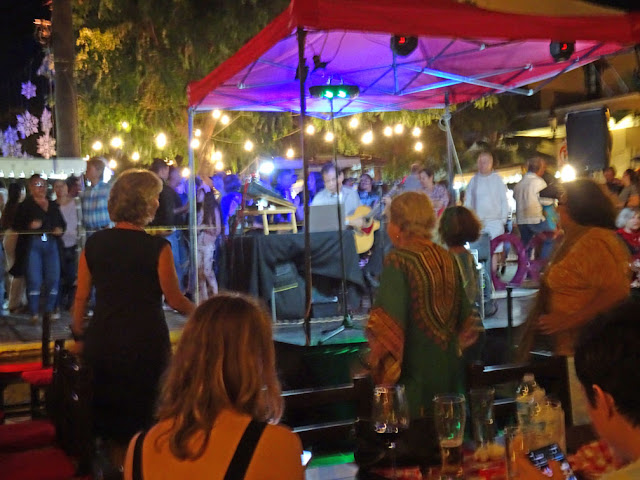 Here is a short video of three different songs put together. Actually they all sounded alike to me. But fun to listen to and watch. Click here to watch it full screen. I had this ready to go yesterday and got busy doing so much nothing I forgot to post it.
I was disappointed about the decorations in the Plaza. Maybe they aren't finished yet. But I think they are. I'll have to take some pictures in the daytime as some weren't even lighted 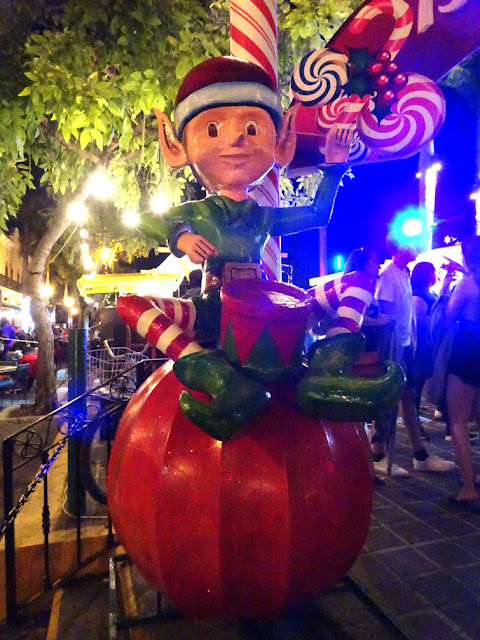 Lots of venders out for a Sunday night. Mostly jewelry and toys for children. 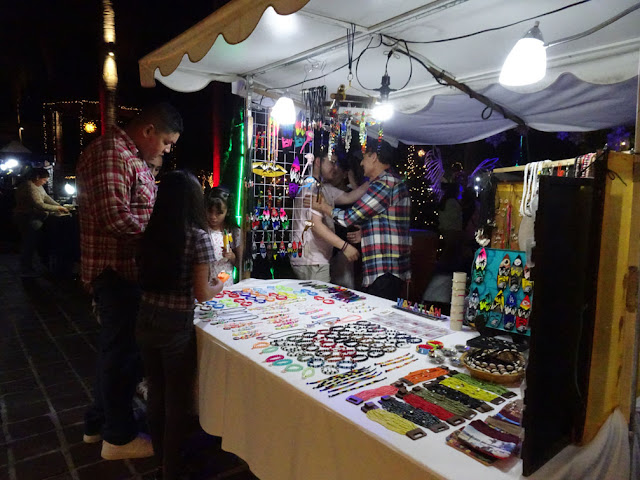 Another musical group. They were LOUD. 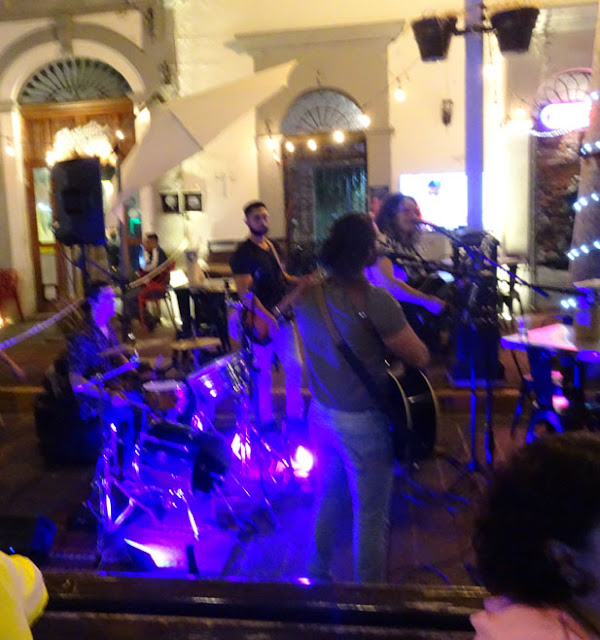 The gazebo - not impressed with this. 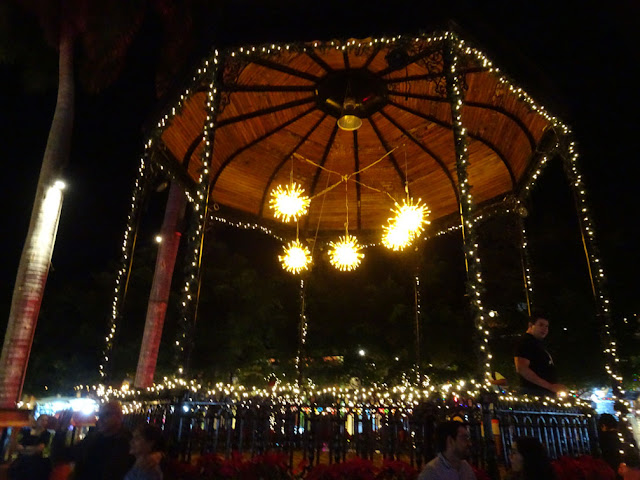 A woman selling jewelry also making some while waiting for customers. 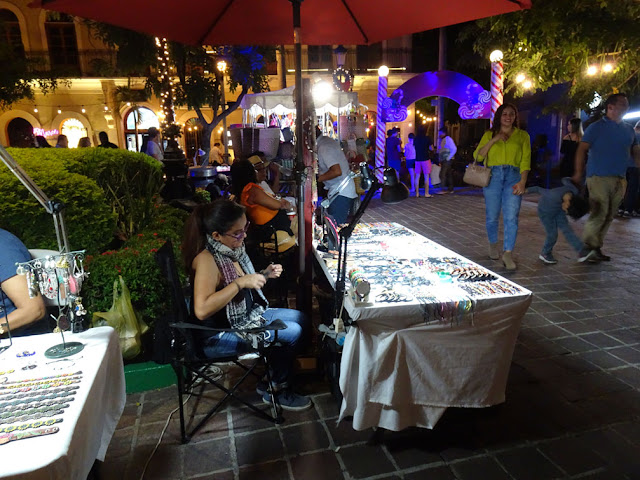 And this little Christmas tree. From the picture it looks real - hope not as it will wilt quickly. Today it is 91 here with the dew point at 68 - so feels like temperature of 93. UGH. 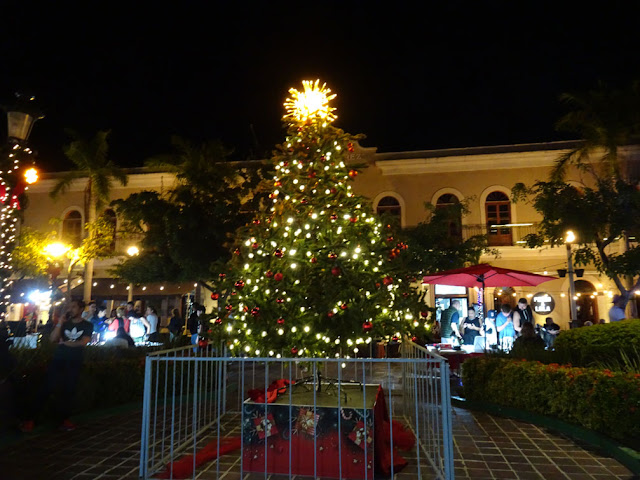 And yet another music group. I think they were just walking around and would stop and play if there were a few people sitting places. 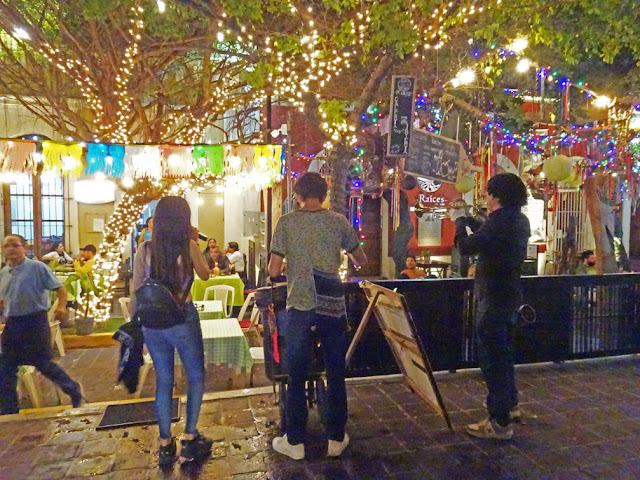 Another vendor. Lots of toys. And they sell caps - the kind that go BANG. 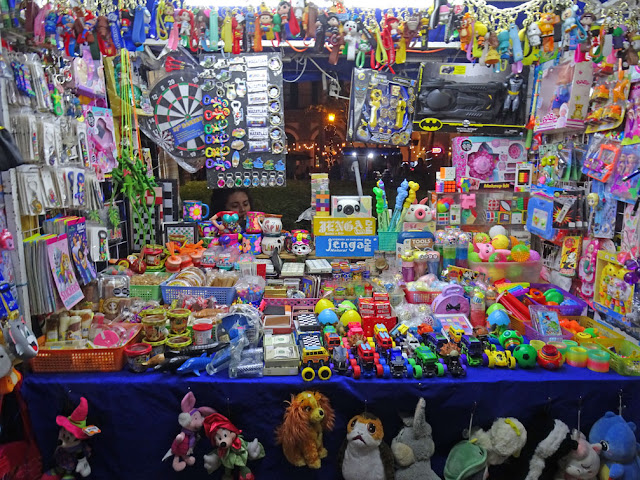 This is the only thing I was impressed with. Lots of little girls standing in line to have their pictures taken with the wings and halo. 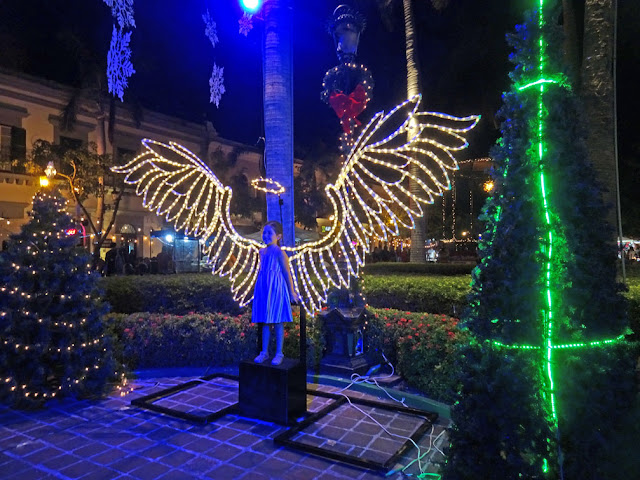 While we were waiting for a taxi to come by I happened to look into a restaurant/bar that hasn't been open before. A couple of neat murals. But couldn't get a good shot of the other one. Another day. 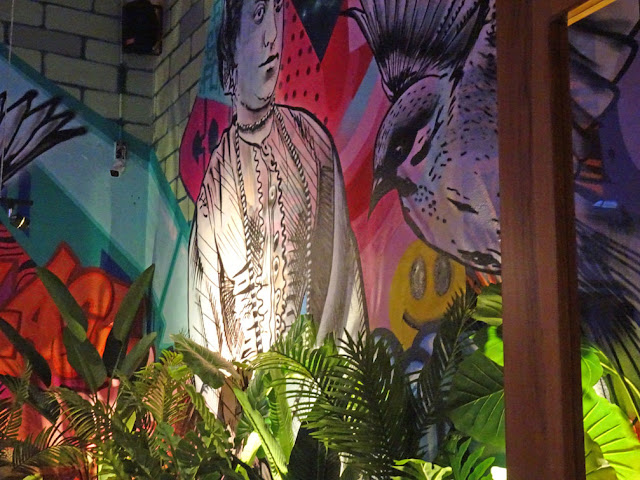 Just some scenes from the area at night. 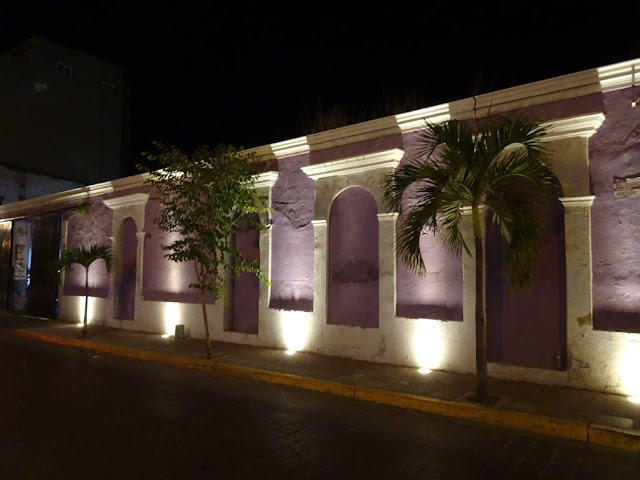 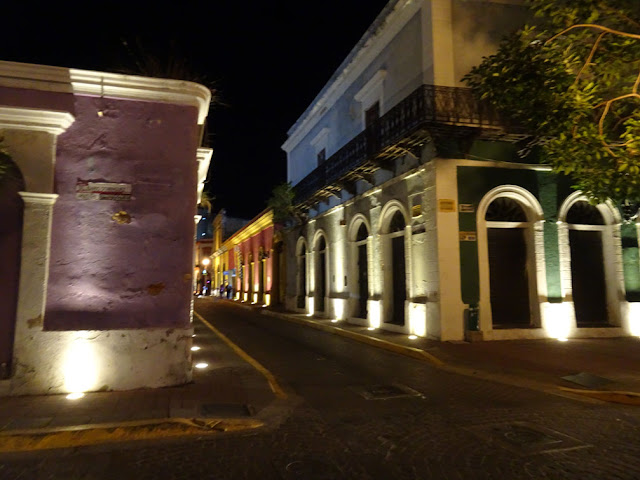 Finally a cab came by and we had a smooth drive home. Today took the laundry in and are watching World Cup games. I've got banana bread in the oven and am going to cook dinner tonight. Picked the wrong day weather wise to do this.  Hope the AC keeps working.

Looks like Christmas cheer is picking up around there. Lots of visitors will be coming to visit, I’ll bet. Thanks for taking us along on your trip.

Doug and Nancy - soon you'll be enjoying Mazatlan
gumo - You are welcome, my pleasure to take every one along. Enjoy.