Tuesday morning we thought we'd take a nice ride into Centro. Ride over was smooth and relaxing, not much traffic at all. Then we got close to Centro...I had forgotten there were two cruise ships in. That means 8000 people who want to get off and tour the city and surroundings! A street cleaner cleaning the bike path on the Malecon. 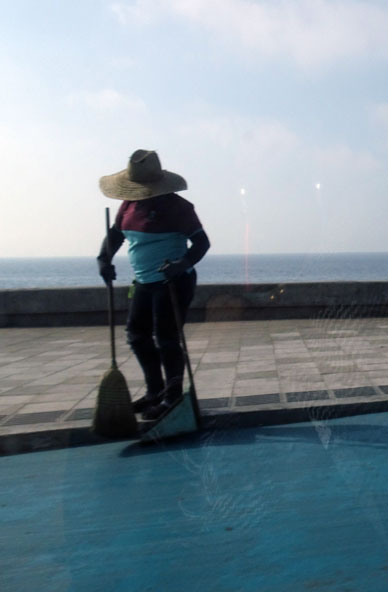 Hardly any traffic, but lots of mist over the ocean. Temperature got up to 90 - dew point was 69% - humidity was almost 80. More like soup out than air. 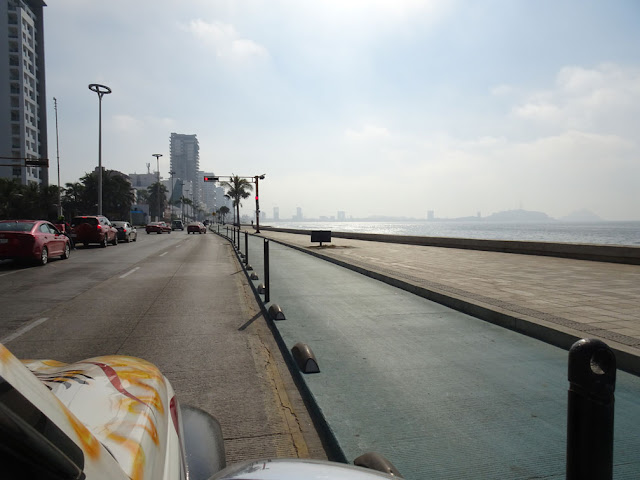 The poor painted seal lion statue. He looks like a robin red breast. 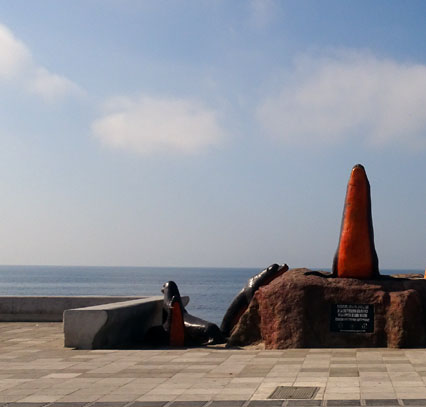 Cruise ships in = cliff divers. Didn't get shot of him diving as we were driving. 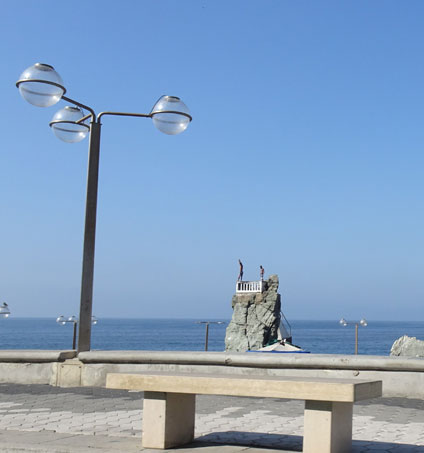 Bill found a spot to park so we got out to walk around a little. There were three big tour buses parked along the street. Lots of tourist and vendors about. Lots of hats for sale. 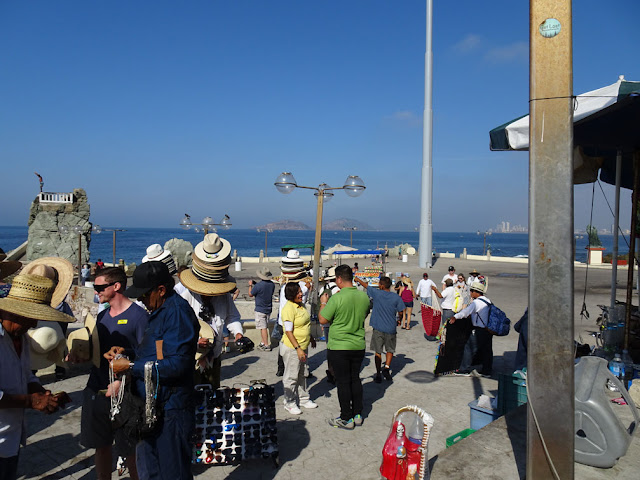 Bundles of sea shells and a strange monument. And of course sun glasses 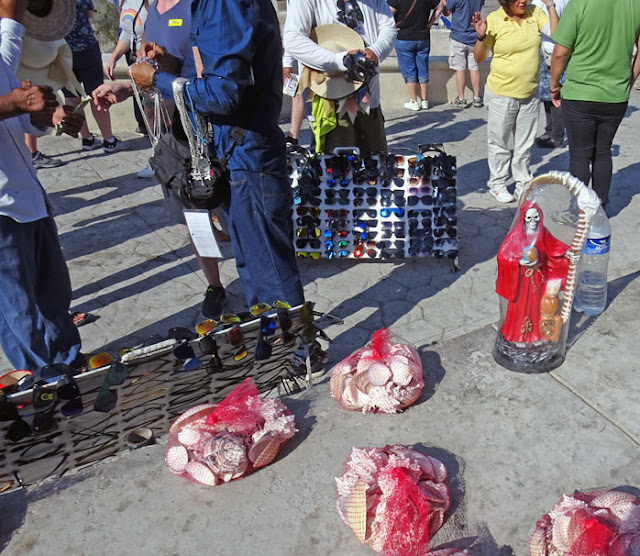 The buses lined up disgorging passengers. 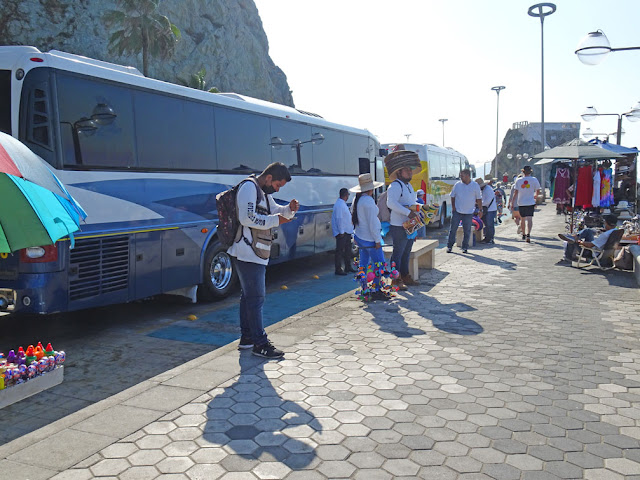 Hammock chairs any one? The divers dive off the rock in the back. 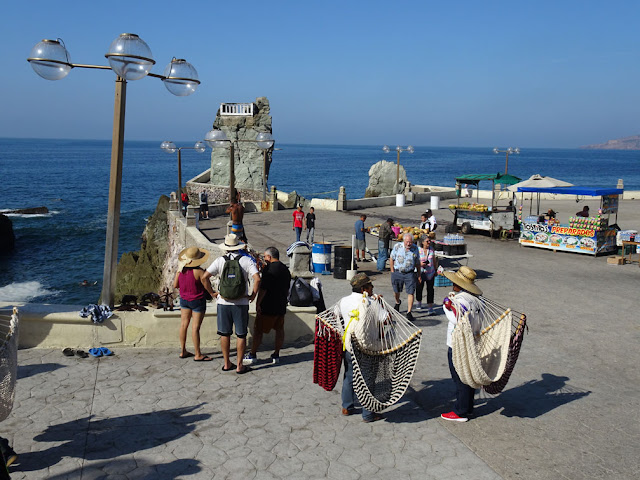 Coconuts and water. I bet the water sold better. 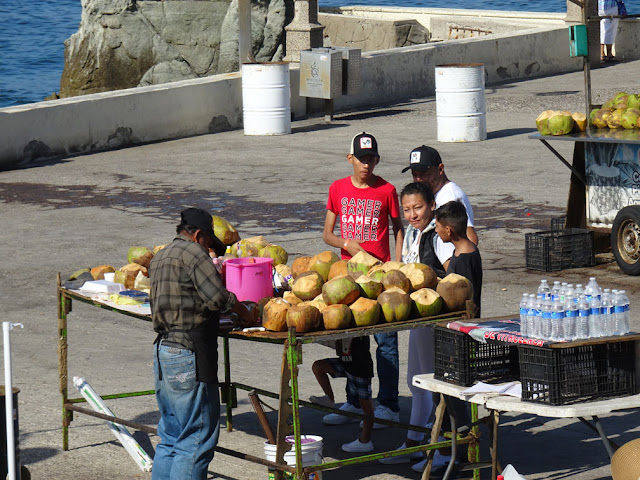 One of the divers, he just got out of the water. 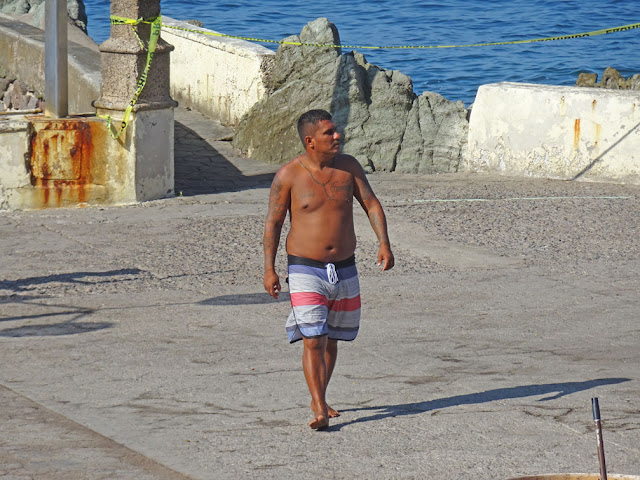 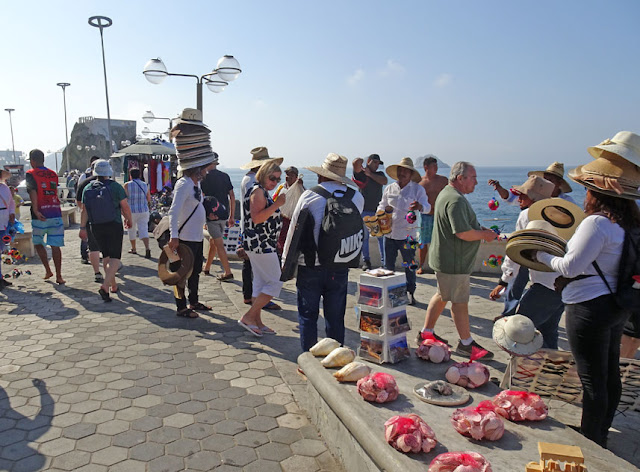 Back across the street where we were parked. We were parked next to an area where the divers hang out between dives. Hummm..... Urinating - is not the same word in Spanish as it is in English. So does this mean gringos can't ...but...Necer seen this sign any where before. 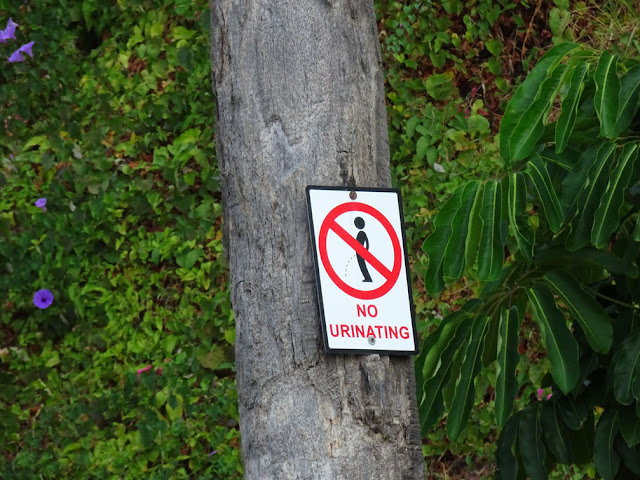 Also part of same area.  No idea about the legs. 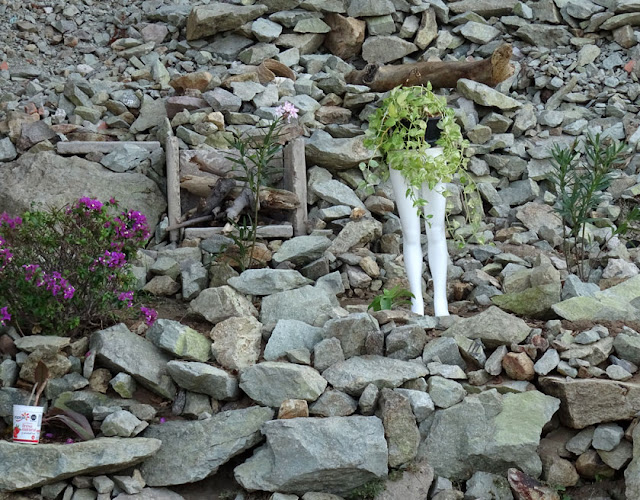 A shrine? A place to just hang out? Christmas decorations? 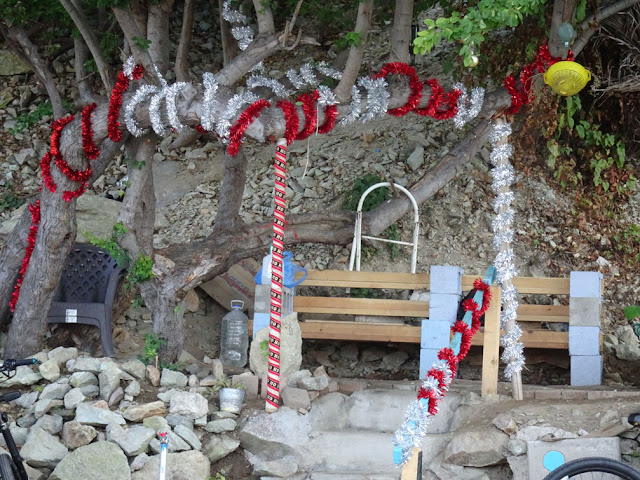 This was there too. 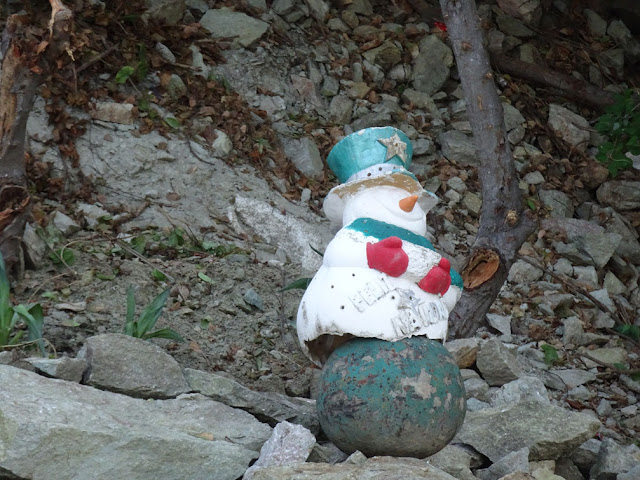 Back in the car passing a bicycle tour. Bet they were hot. 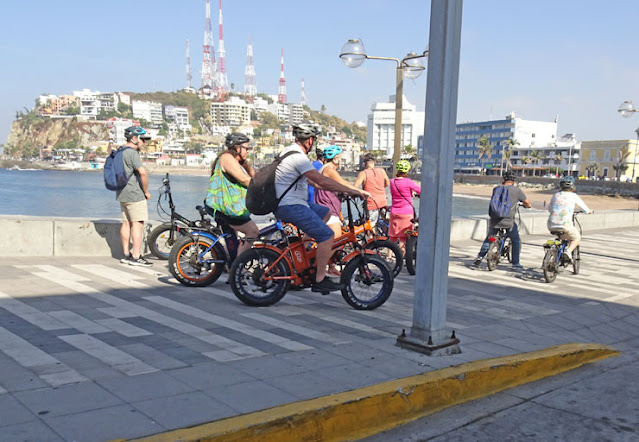 Like this colorful street of homes - the open garage door goes to an auto mechanic place. 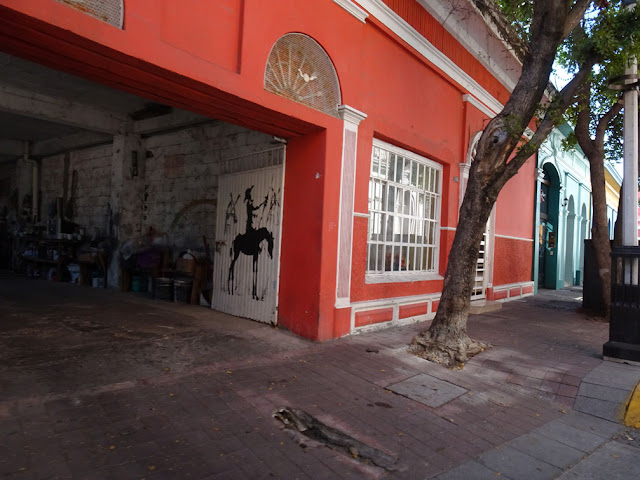 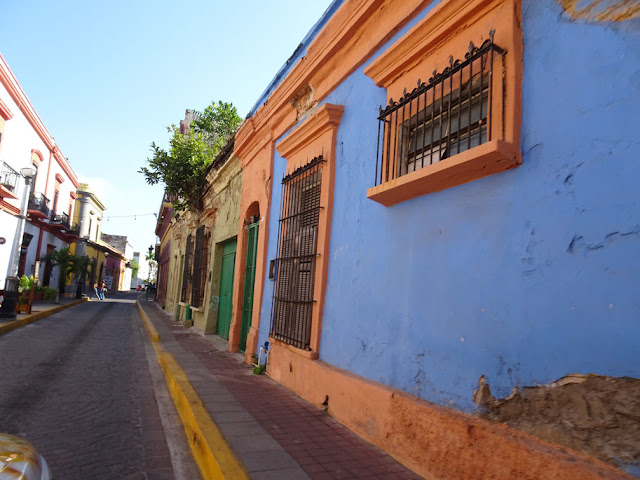 We were trying to get to the Plazuela Machado but all the streets there were blocked off with barricades and police. It didn't seem like it was a crime scene, maybe just keeping the cars away from all the tourists there. 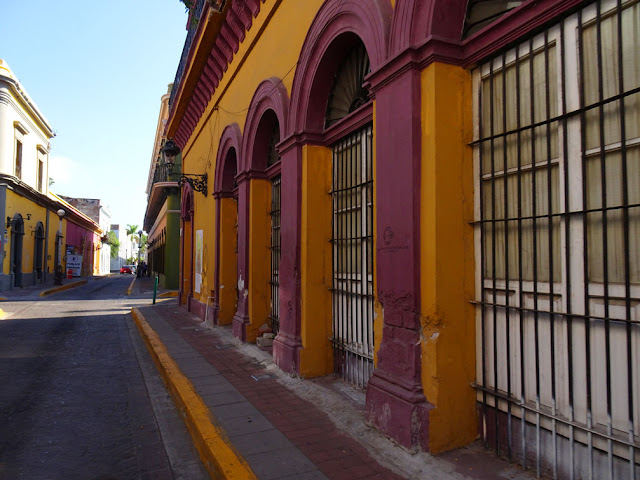 Working on a second floor. 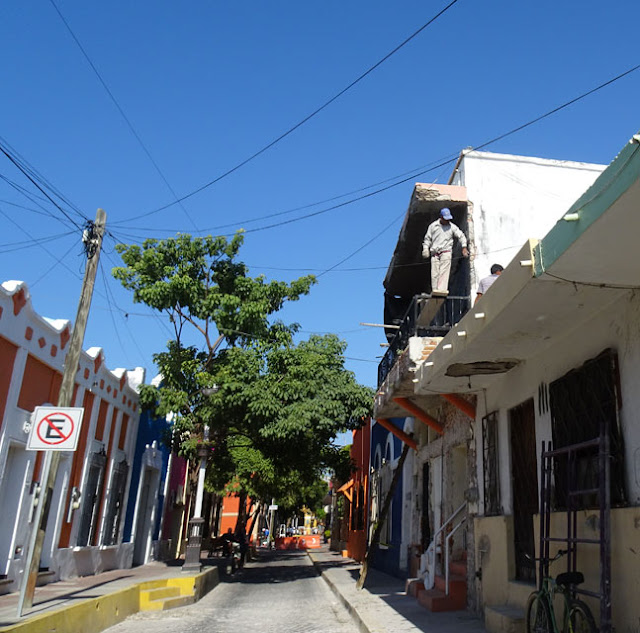 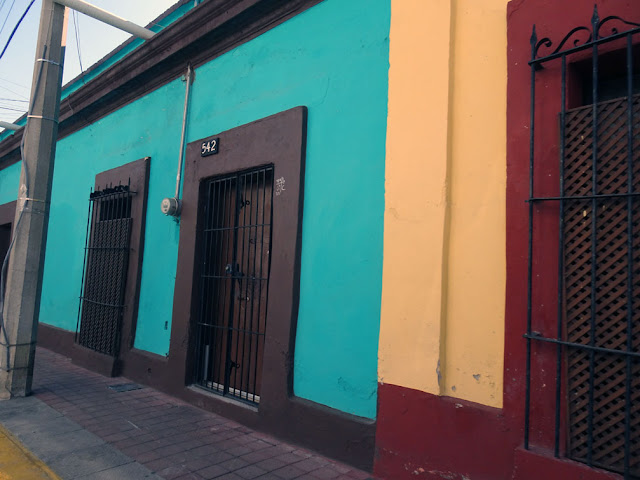 Then we gave up and went on home.
But come late afternoon we were out again, went to Fat Fish for RIBS again. This time they were smaller and didn't have as much sauce on them. But still good. I have left overs for today. 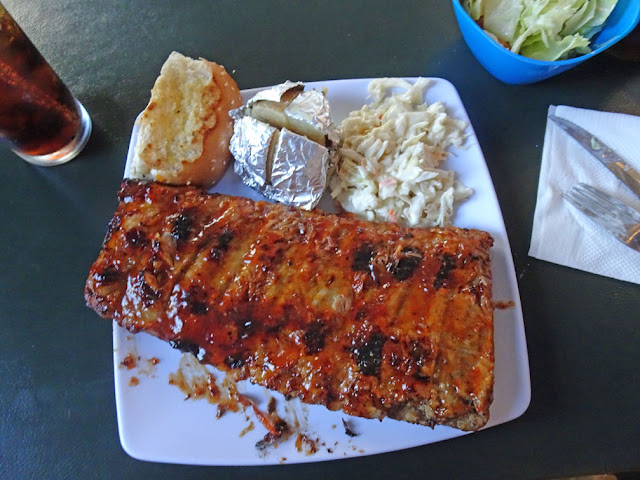 OMG - this is hard to believe. The new bridge over the river on the road to El Quelite collapsed on Sunday. It was supposed to be dedicated in a week. !!!  How did this happen?  The NEW BRIDGE !!! So guess every one will still have to take detour through Marmol or ford the river until who knows when. This picture is the NEW bridge - good thing it wasn't being used. 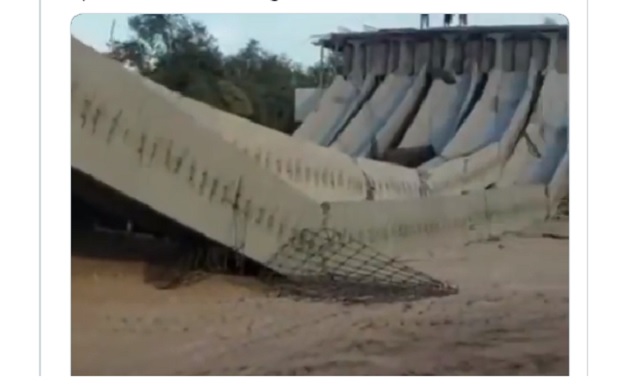 Today we discovered something else that should not have happened.
Posted by Carol and Bill at 2:43 PM