Wrote most of this yesterday evening so I could post today before we got in the car to tour the area. It never really cooled down last night, but today isn't supposed to be as hot as yesterday. Sure hope not. It's 7:00 and pretty cloudy out. Hope they go away before we go to Arches National Monument. More red rocks. I might even miss the NASCAR race today to enjoy nature.
We have gone up the highway a piece, we are now in Moab, Utah. We left Monument Valley around 10:00leisurely drove the 150 miles and arrived in Moab at 1:30. Good road all the way, very scenic and no wind. Today the sky was overcast so the rocks didn't look quite as red as before.
We are in the Moab Valley RV Resort - I had called a couple of places and they were full so when I called here and they said they had a cancellation I jumped on the reservation. But driving in we saw a couple of smaller parks that had vacant spaces at I'm sure a cheaper price. But it is a very nice place. They even gave us a couple of fresh baked chocolate chip cookies when we checked in.
It was a lot warmer here than I thought it would be, at 2:00 it was in the high 80s. After setting up we jumped in the Jeep to go find somewhere to eat lunch. As we got rolling we heard a thump, thump, thump...oh, oh. Did we have a flat. Nope. Humm... then the sound was gone. Bill thinks we had a rock in the tread of one of the tires. But Willie does have a CLANK, maybe the muffler is loose or something. We've rode him rough the last couple of years.  Any way back to yesterday and todays drive.
This is a Hogan that can be toured. 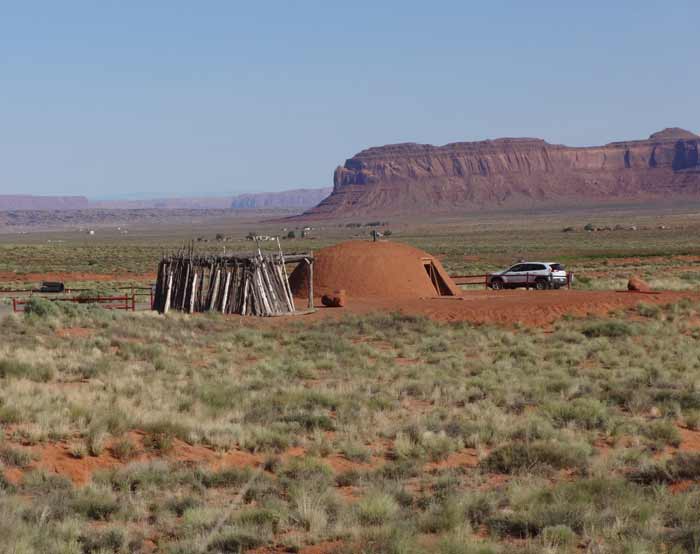 These hogans in the park by the hotel. Again they can be toured. Some interesting info about them.
The hogan (hooghan, literally, "place home") was the basic Navajo dwelling, and in the early 1800s conical, forked-pole hogans ("male hogans") still dominated, although by the end of the century they would be replaced by the roomier, hexagonal or octagonal, cribwork hogans ("female hogans"). 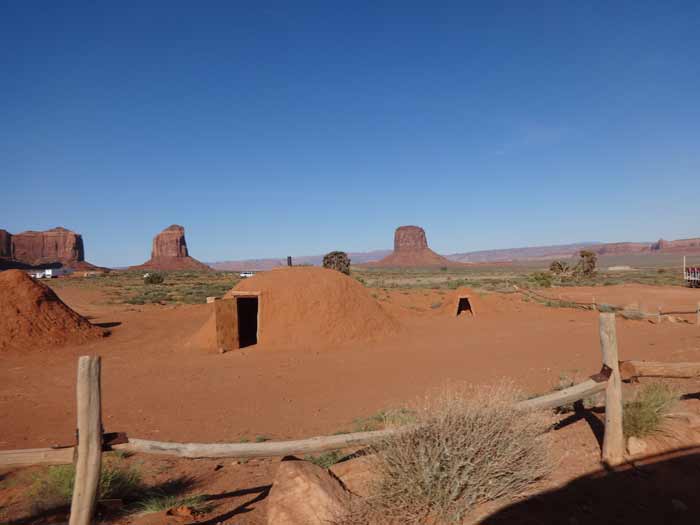 We drove up to the lodge to look around - gift shop, John Wayne's Cabin etc etc. Just thought this was neat. 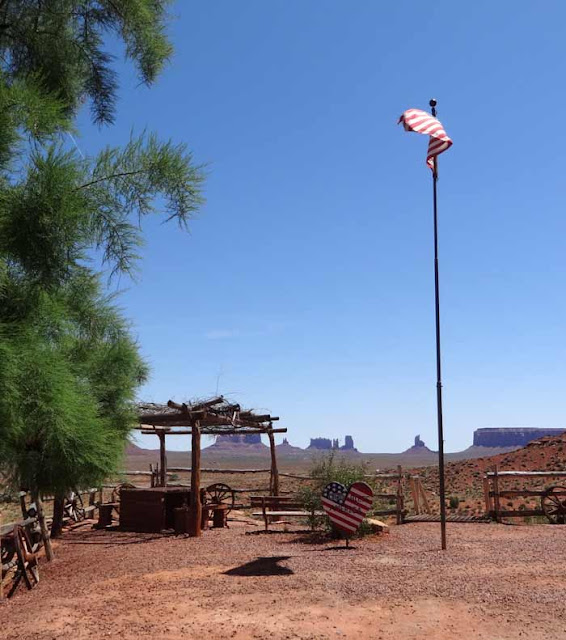 And, of course, a picture of John Wayne. Wish the Gouldings sign wasn't behind him. 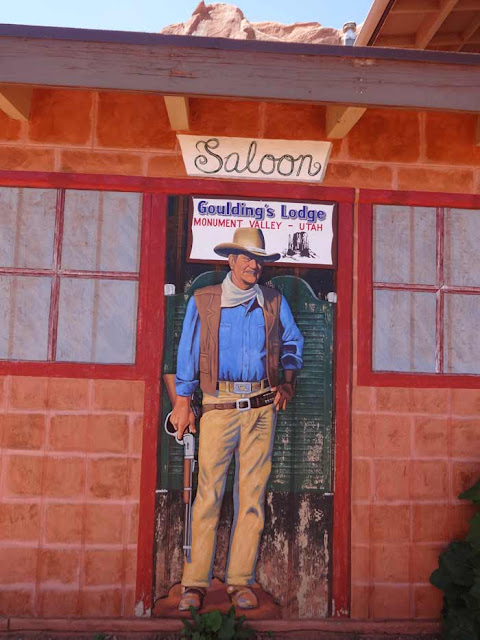 The Cabin - used during the filming of "She Wore a Yellow Ribbon." 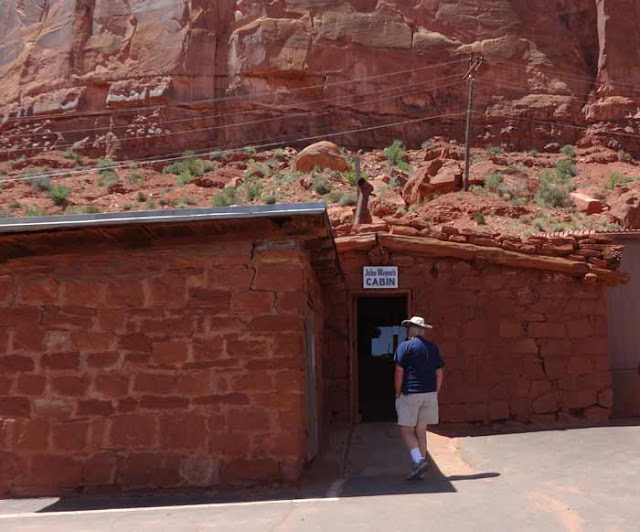 Some information about it. What you can read around the reflections. 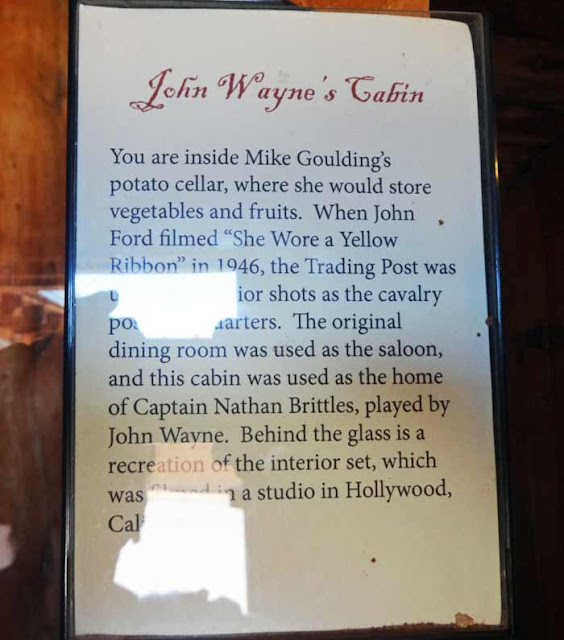 The interior of the cabin - behind glass so again dealing with reflections. 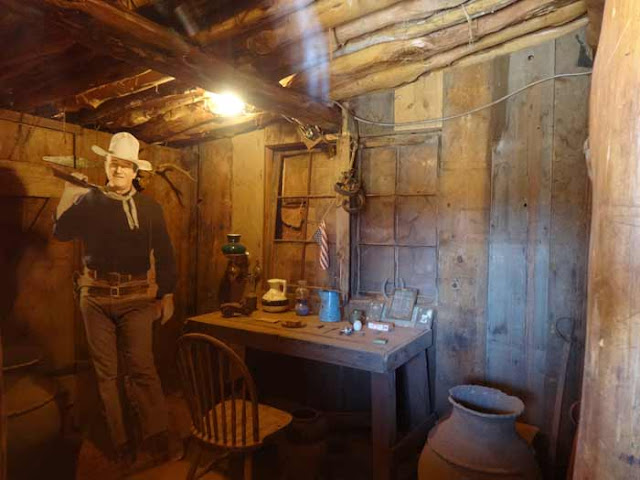 We ate lunch in the Lodge's restaurant. Quite a view. 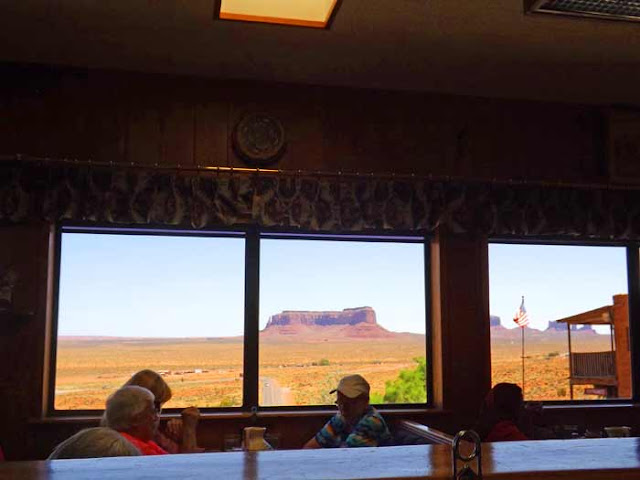 Willie looks like he has spent lots of time out in the desert. Macho look. 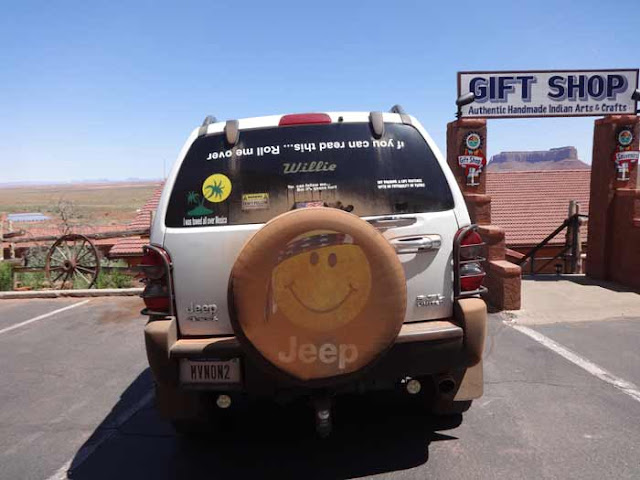 A speed bump in fact a couple of them leading in and out of campground. Teaching the new RV about Topes - Willie is used to them. 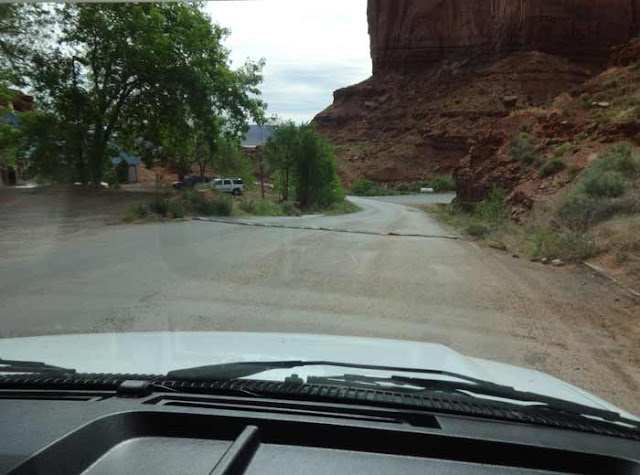 Leaving in the morning. The overcast sky takes a lot of the color out of the scenery. 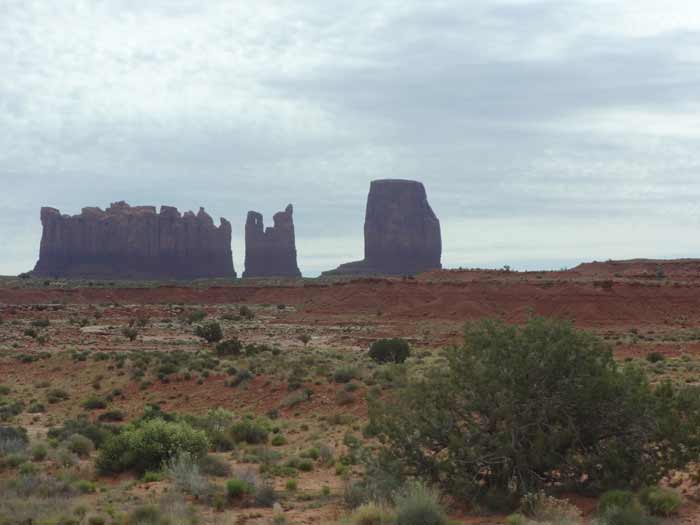 Red rocks in front of us and reflected in the side mirror behind us. 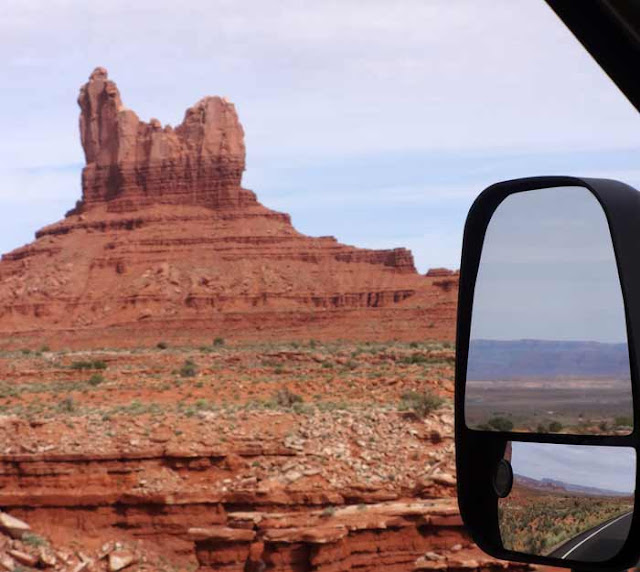 The name of this rock is "Mexican Hat" 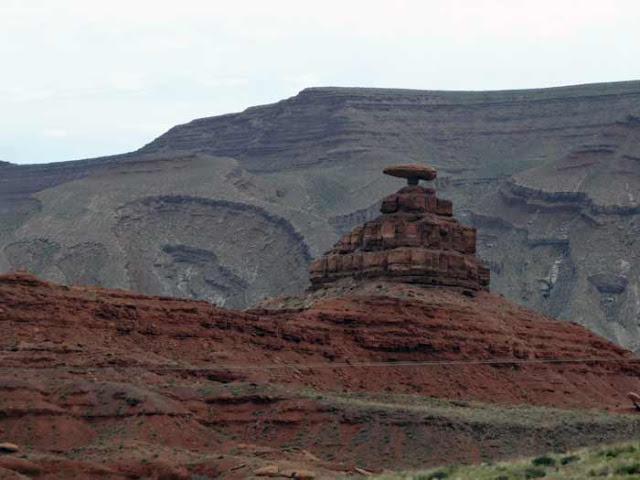 It looks like it is trying to rain out over the desert. Checked the weather and it says 40% chance of rain at Mexican Hat. 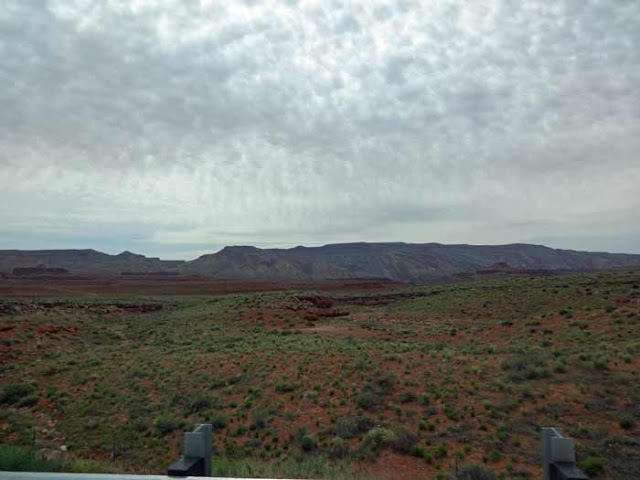 They have a very long way to go before they reach a town. Good strong legs and lugs. More power to them. 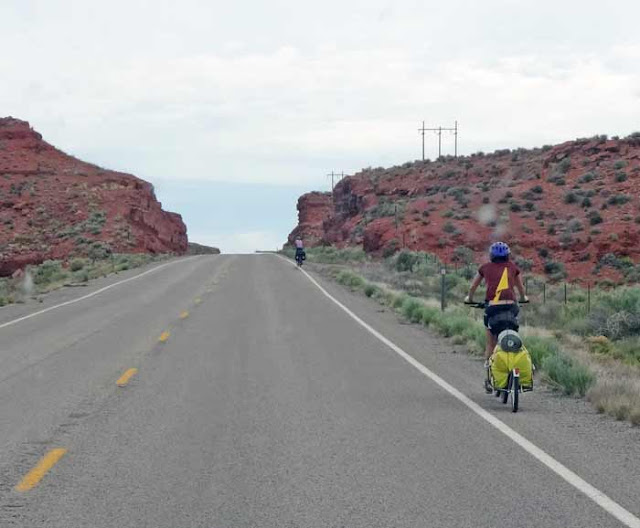 Most of the ride was very pretty scenery 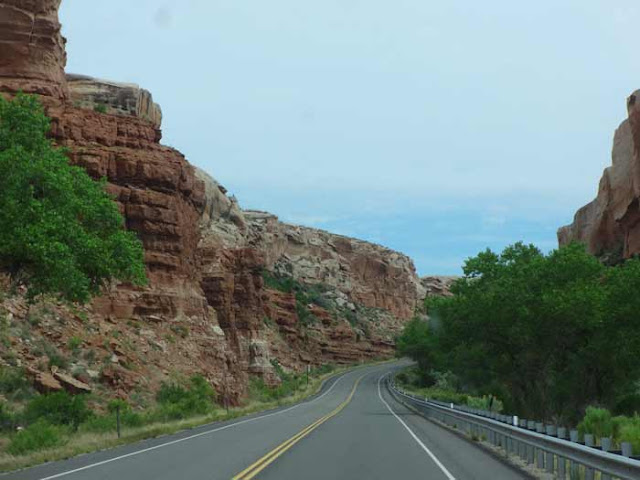 Looks like there is a big fire out there in the distance. 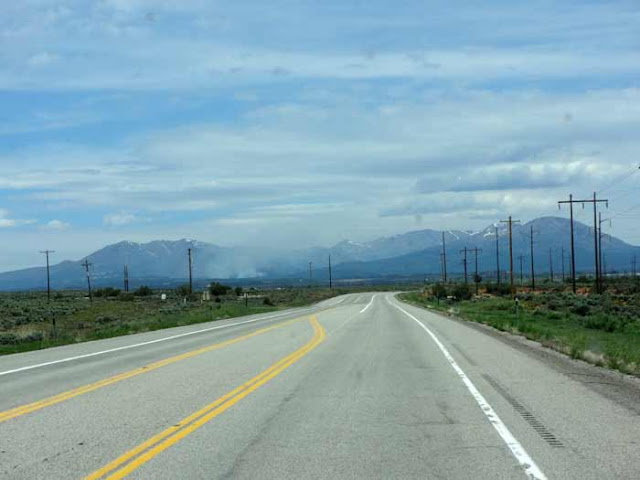 Don't know what this place was and just got a quick chance to snap a photo. Enlarge it as much as you can. The cowboy is roping the bucking horse.

Lots and lots of snow on the higher mountains. 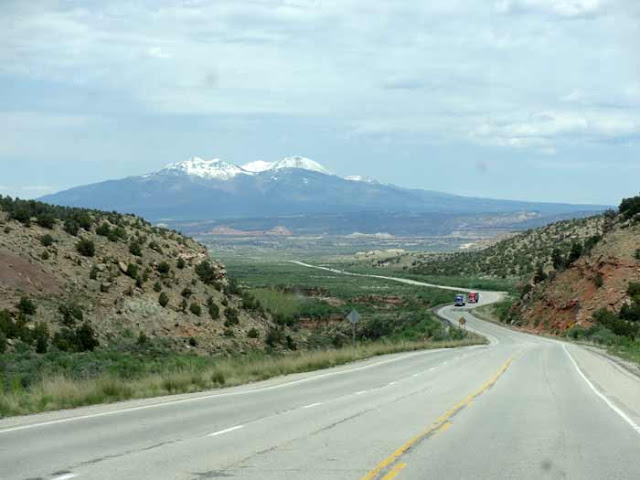 This rock was sitting all by itself out in the middle of flat land. Makes you wonder why it remains. 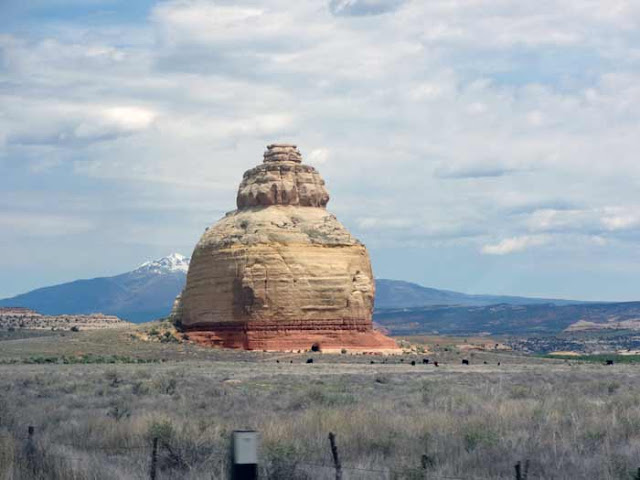 Even more snow in the distance. 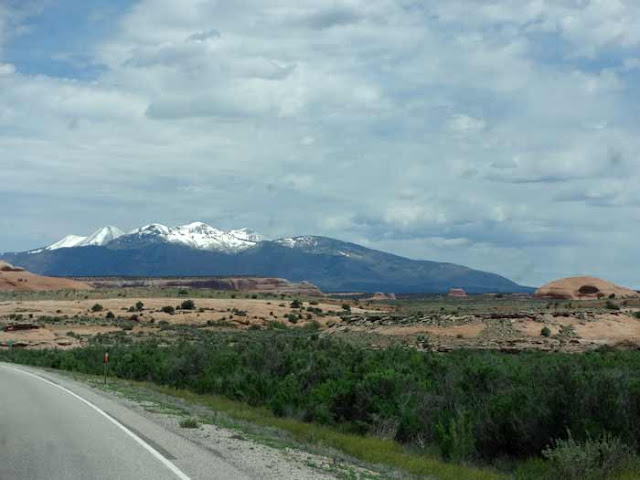 We're getting close to Moab - the first arch. There are people under the arch 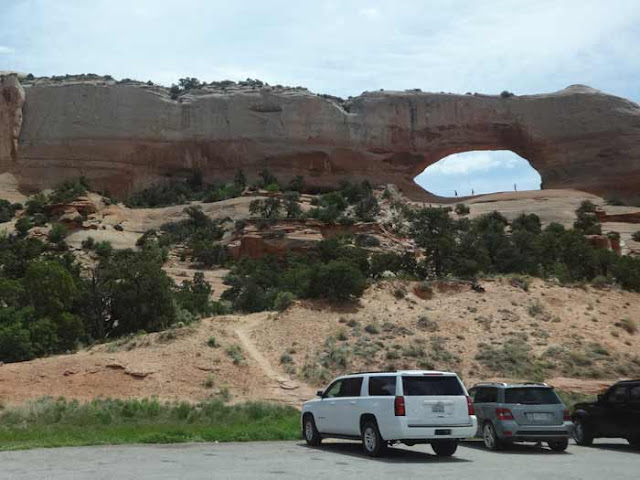 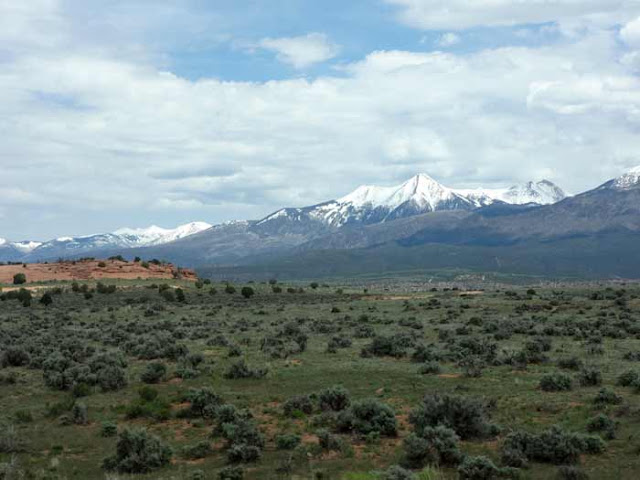 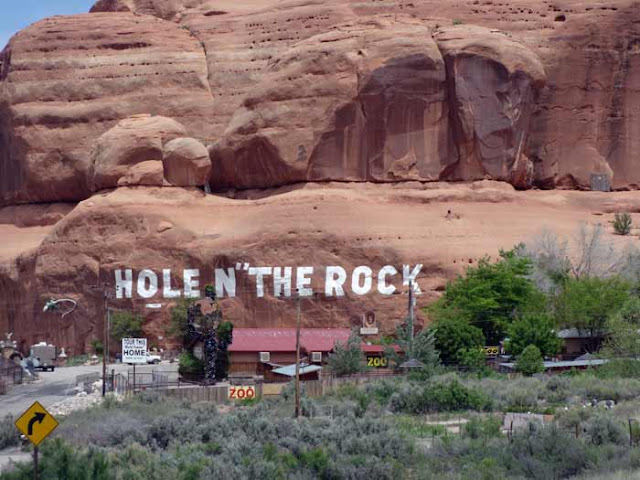 You may enjoy The Museum of Film and Western Heritage at the Red Cliffs Lodge, nice drive, and it is free. Thay also have free wine tasting if you like that sort of thing.

Thanks We plan on going back to Moab when we can find a cheaper campground and spend some more time there. So I'll keep that in mind.