Went to a soccer Game in Vegas


Had a very different evening last night. Our son gave us tickets to a soccer game at Sam Boyd Stadium (just down the street from us.) The New York Cosmos vs the La Liga (Spanish league) team SD Eibar.  Was tied 2 - 2 at end of regulation time so it went to kicks to break the tie. The Cosmos ended up winning by one kick. Hate to see a game end that way.
Hadn't heard of La Liga Woprld LFP Challenge before so looked it up.

LFP WORLD CHALLENGE is a program created in 2014 by LaLiga with the support from the Government of Spain the Higher Sports Council (CSD) and the Spanish Institute for Foreign Trade
It is an initiative that aims to bring together the best professional clubs around the world to raise internationally the image of Spanish football, spread the values of the Brand Spain and Spanish companies, as well as create opportunities through cultural and business events taking advantage of the synergies in the activation of a sports event of the highest international nature.
The overall program is divided from the following sub-brands and events:
LaLiga WORLD. A series of friendly matches among the most popular local clubs and the most representative teams from LaLiga.
And so that is why they were playing New York. La Liga is the league that Barcelona plays for so we've seen Eibar play on TV several time.
The before game fanfare. 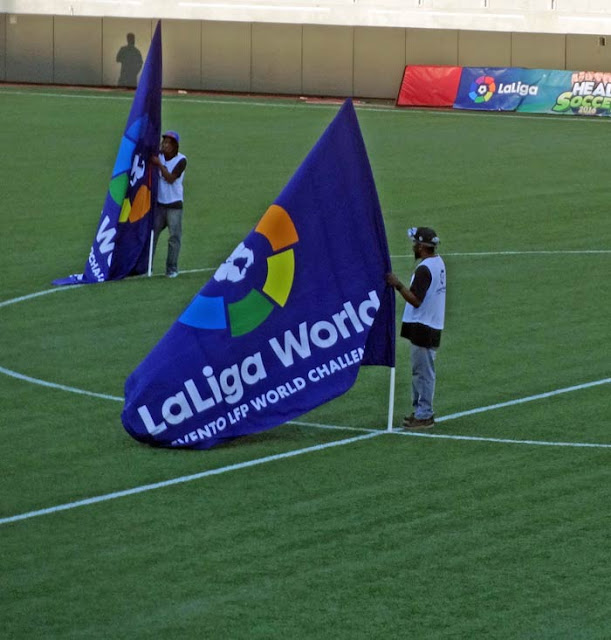 The teams coming out with the children. A tradition Children looked excited. Lots of families with kids wearing soccer shirts in the audience.
Cosmos in white, Eibar in red/blue shirts. . 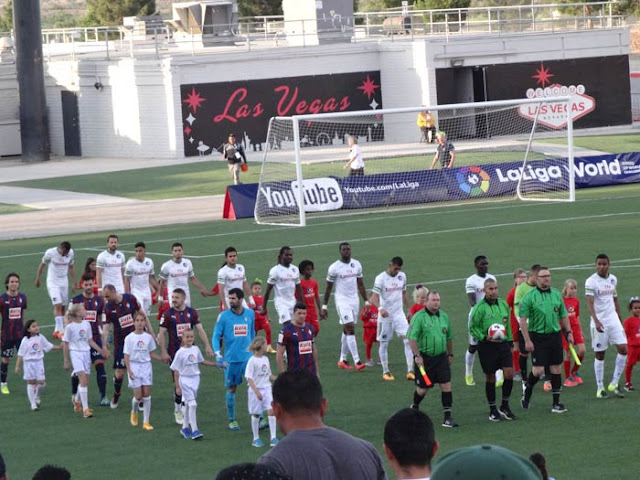 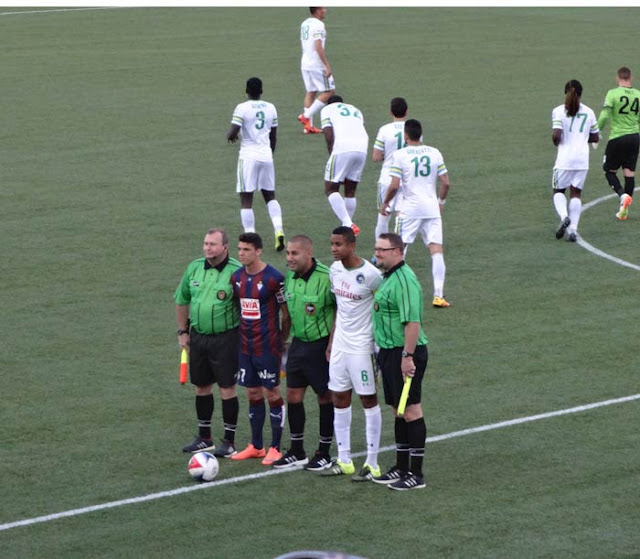 Didn't take any pictures of playing. Just not light enough and no one stood still long enough for me to focus. Did take a short video.
I think I prefer watching on TV where the cameras keep track of the action and the announcers say what is going on. Bill keep pointing things out to me that I didn't even see. But then he knows the game. I was just thinking that the last live soccer game I saw was over 51 years ago when I watched Bill play in San Pedro, CA before we were married. At that time I had even less of a clue what was going on. He made a goal during that game.
About half way into the first half the wind picked up and it got kind of cool. At least it didn't rain. They were playing on AstroTurf that had been watered just before the game. We asked one of the grounds keepers why and he said it was to protect the players if they fell and skidded. The wet plastic wasn't as rough as dry plastic. Okay!
Bill is taking the Jayco to a window tinting place to put a strip on the top of the windshield as the reflection from the cabover is very distracting. Then he'll bring it home and we'll do some more re arranging before putting it back. Today is a NASCAR day so I'll be watching out there while working. We ordered some "short queen" sheets so hope they fit better. If they do the job will order a couple more sets. Couldn't find ones with rounded bottom corners though. While cutting the quilt down I also cut the blanket down.
Now I need to rearrange some cupboards.
While Bill was gone and before NASCAR worked outside pulling weeds - wouldn't think they could grow through the rocks but they do. Also blew all the stuff/leaves etc. off the back patio. The wind sure makes a mess.
Windows tinted in RV and now Bill has the Jeep at the mechanic to try and figure out what all the thunking and clanking is when we go over bumps. Something loose or something breaking???
Posted by Carol and Bill at 2:52 PM