We had a very interesting day today. Had a doctor's appointment at 10:30. Did want to start anything at home so we went out to breakfast then to the doctor. My blood pressure is good and holding. The doctor very nicely wrote us a whole new set of prescriptions each for 90 days. We will take them to Smith's Pharmacy and use coupons from GoodRX,. as our insurance won't allow us to refill most of them until mid December - by then we'll be in Mexico. Using the coupons they won't be too much more than our regular co-payment. One is a new one for Bill - will have to check what it will cost with insurance as it is a little expensive without. We were out of the doctor's office by 11:00 so we went to Home Depot to get some florescence lights for the garage and my glass area.
We were only a couple of feet into the store when we heard, "Bill, is that you Bill?" We both turned around and coming towards us was a man who works at Home Depot. I thought to myself - we aren't in here that much! As he reached up he introduced himself. No we didn't know him. He recognized Bill from the Blog. If Bill hadn't of been wearing his hat he probably wouldn't have recognize him. So we talked with him for a while. He too spends winters in Mexico and has been reading our blog for years. It is always strange when someone you just met knows a lot about you from years past. Enjoyed our visit.
Got our lights and headed home. The one window box with plants in it. Bill working on the lighting. See the new light under the shelf right above my work station? 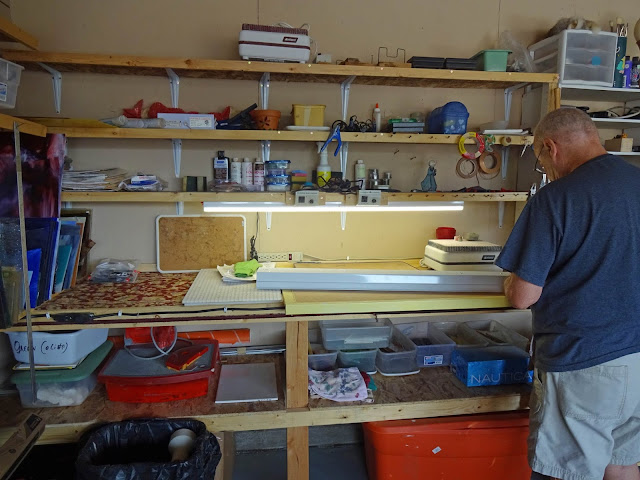 Then he added two hanging ones over the same area. Make it a lot easier to see what I'm doing - or I should say going to be doing. 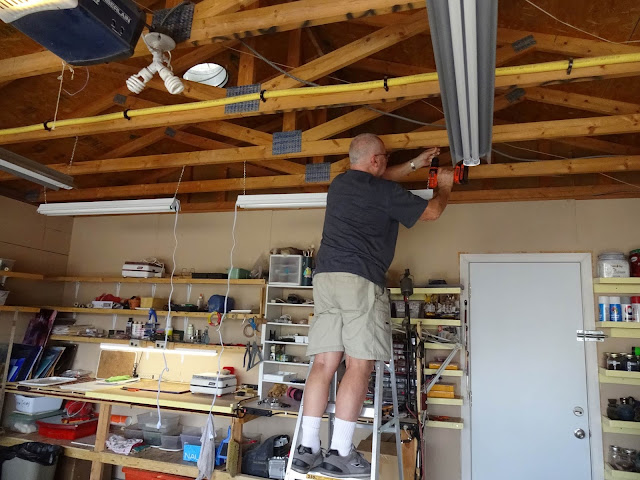 I had planned on doing a lot of quilting today while watching NASCAR. But all race stuff got rained out - in Charlotte, NC. Which turned out to be okay as just as we were finishing in the garage we heard loud engines coming around the corner. OMG look at that! A new home was arriving. Our streets look wide until these guys pulled in. 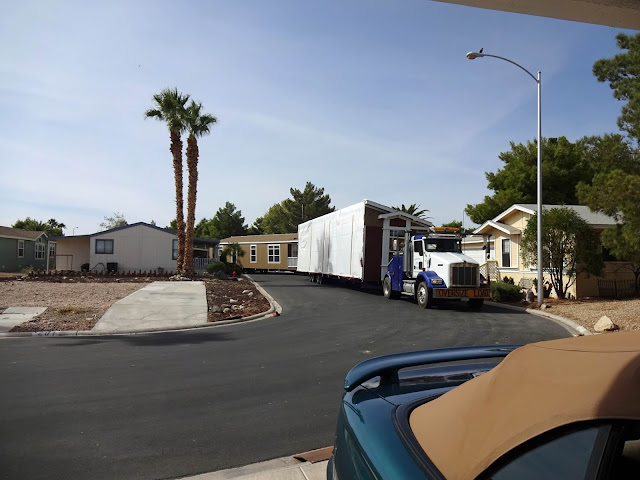 This is the lot directly across the street from us. The first section of the house had already turned our corner and pulled forward getting ready to back in. When the old house was there it had a front walk and a driveway. There is a little slope from the curb to the lot and lots and lots of soft dirt and big rocks. Oh I almost forgot this picture was taken at 1:32 p.m. 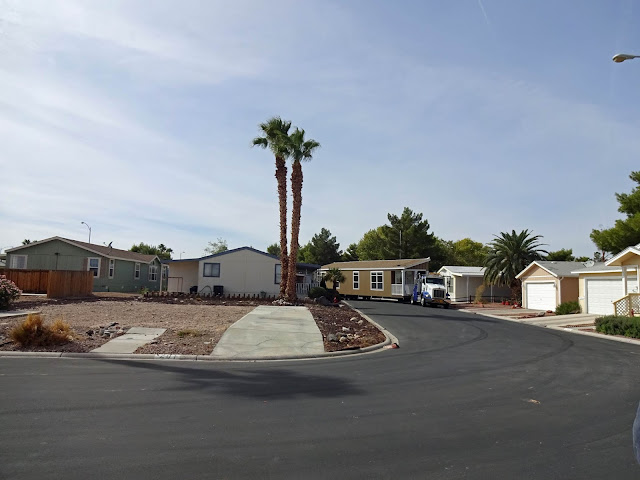 All thoughts of going inside and quilting or watching TV left our minds. We had ring side seats for the entertainment. First try at backing in. 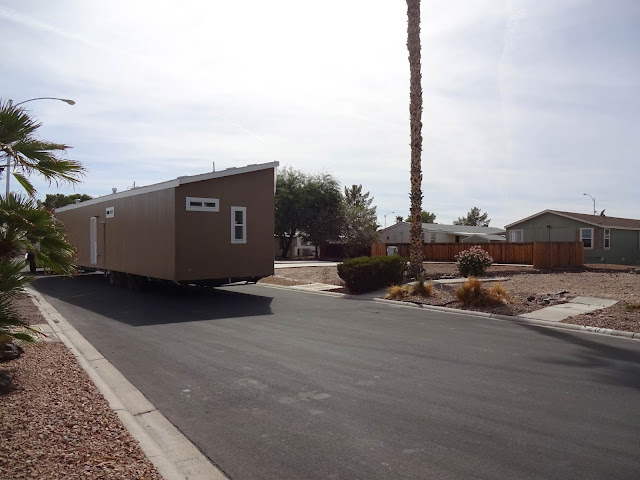 Not much maneuvering room. 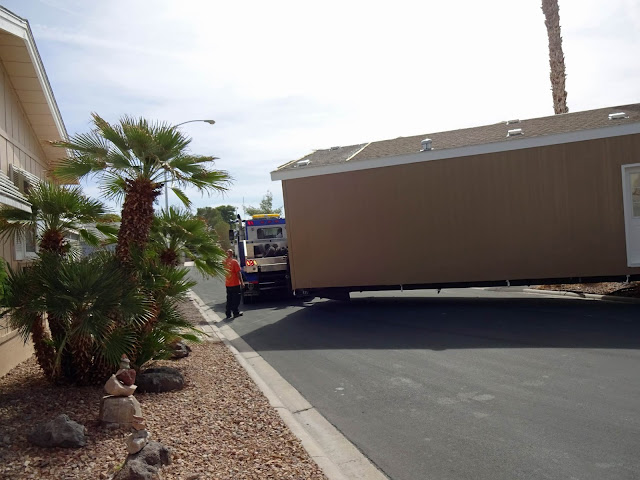 This picture was taken about 2:20. At times we thought the darn thing was going to tip sideways. Right side wheels dug into the soft dirt and left side wheels off the ground completely. I lost count of how many times they backed and and pulled out and did it again. Notice they are putting it on the driveway. 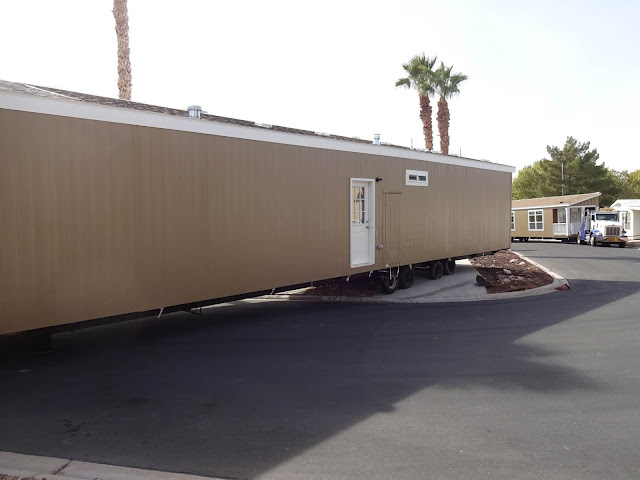 How close he is to our house and yard. 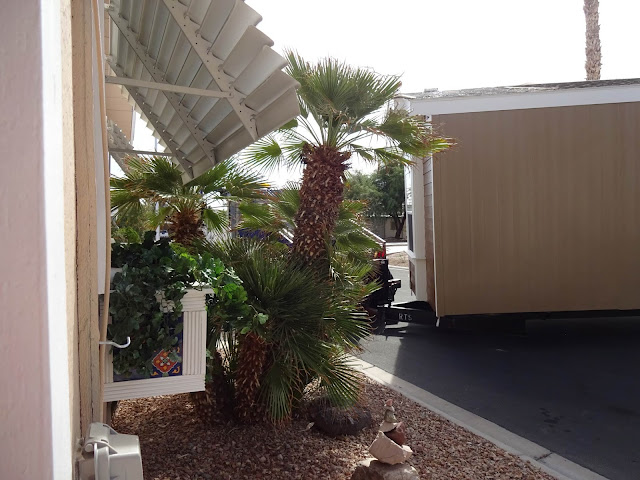 Finally - one down one to go. 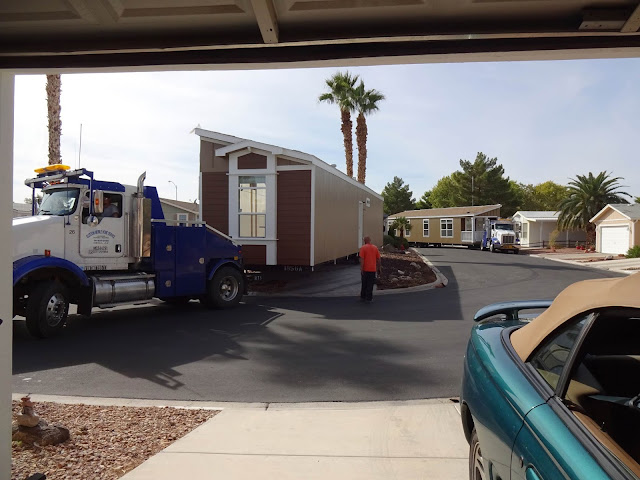 Off to get the other half. 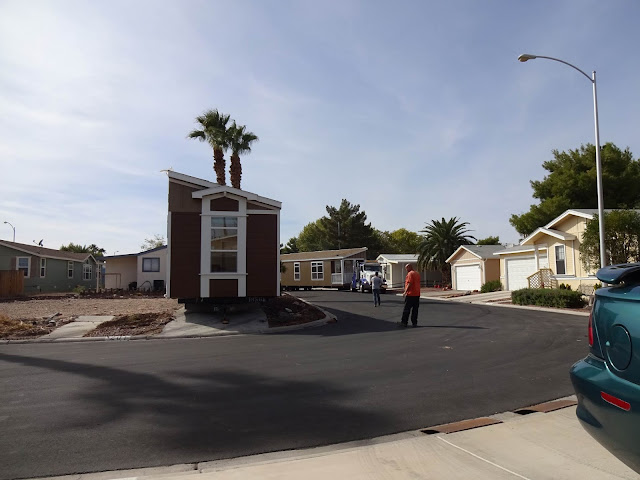 Here it is stopped in front of us again. Should be even more interesting watching this half. It was. 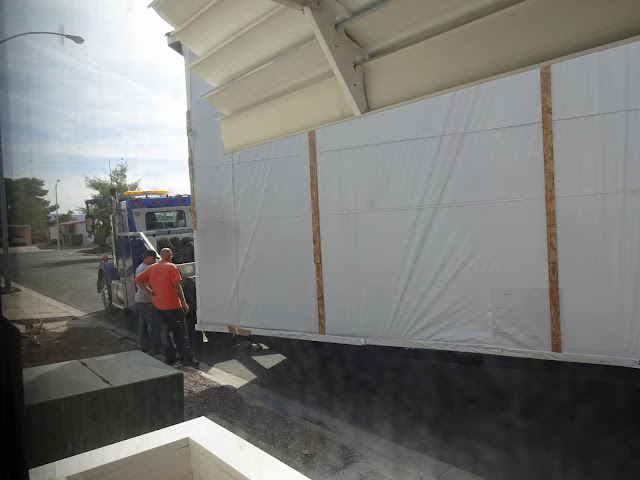 So here they go backing the second section in. 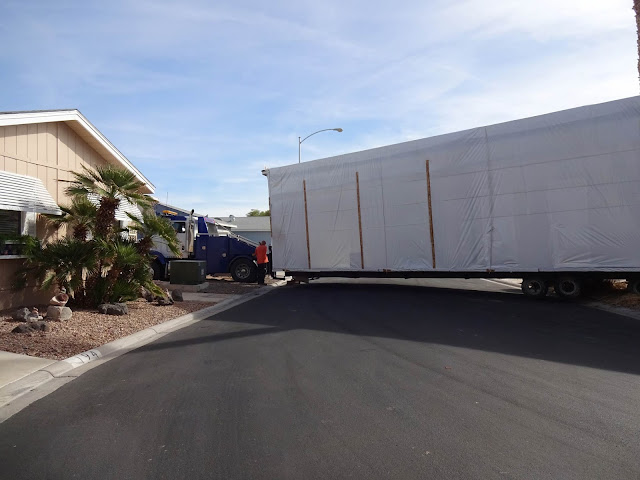 Lots of back and forth again. 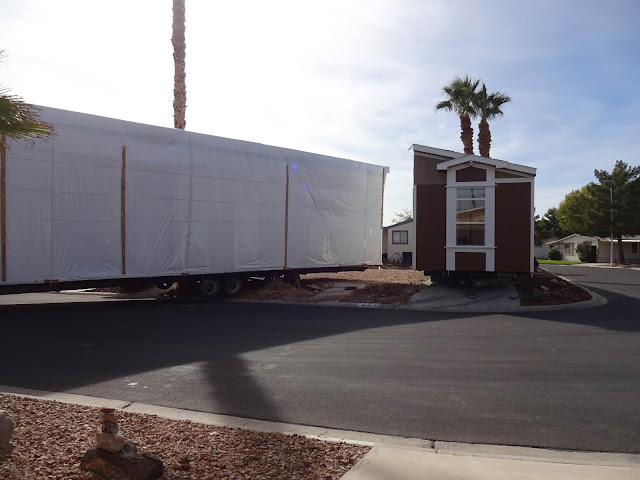 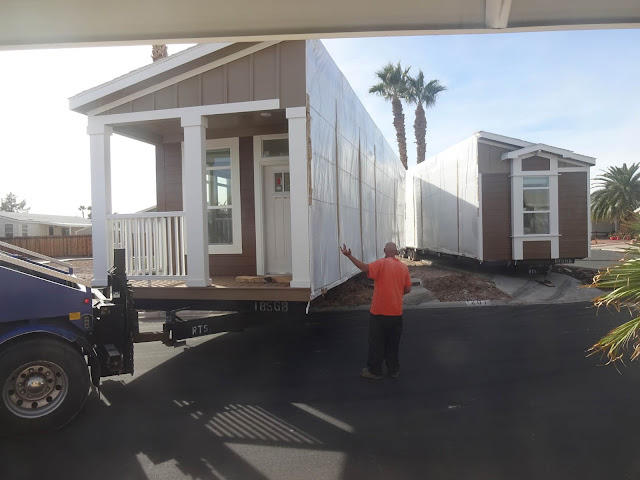 OMG! STOP! Inches from the other half. About now a golf cart came around the corner with two of the people from the office. They could not believe the house was being put on this lot and that it was taking so long to do it. We asked, "What do you mean it isn't supposed to be here?" Nope it will eventually be MOVED AGAIN to a lot 2 lots down from where it is now. Someone else will do that moving when the lot is ready for it. AND the next new one will go right next to us! I don't think I want to be home that day.
No room for the FedEx truck to go by. He had to turn around. 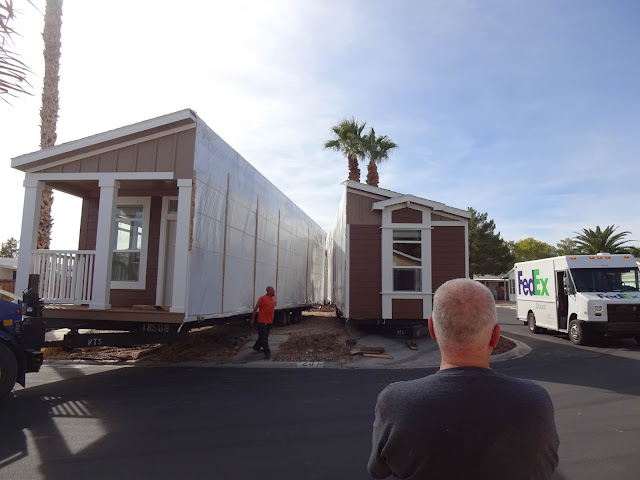 This is not a job I'd like to do. But I wouldn't want to be the guys who have to take it out of there and put it where it belongs either. I hope it is really well made 'cause it sure got some twisting and bumping around today. 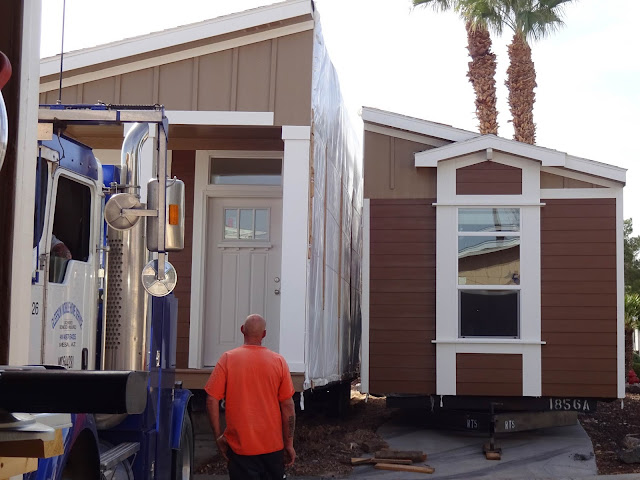 And there it is parked on the driveway of the wrong lot. This picture was taken at 3:28. I like the front porch. And we found out the empty house next to us - where the owner died - has been sold and they should move in by the end of the month. 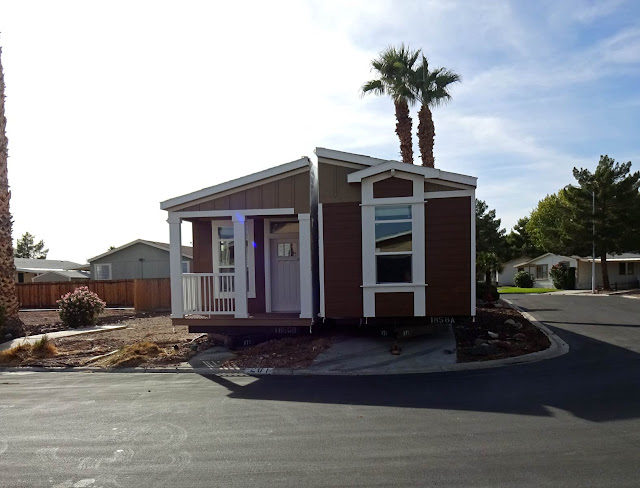 By then we were both exhausted - so closed up the garage and came inside. I did a couple of lines of quilting and Bill made potato/egg salad.

I can't believe that they went all thru that back and forth only to have to move that home yet again! Why did they not just wait until the lot was ready. Loco!!

Bill, i love your planter box, what vision you had, to chose those tiles months back in Mexico. Great job.

Always fun to meet a blog reader especially when they recognize you on the street or Home Depot as the case may be.

You'll soon be on the road. We won't be leaving till around the middle or end of November. But now living in Vegas our trip is much shorter than it was from Indiana.