Yesterday, Thursday, was a very cool day. Notice Gilberto is wearing a jacket. In fact the sun only popped out for a little bit. He got here before 8 a.m. and finally finished and left around 2. About 3 a wild and very cold wind came up. Good thing he was done.
Bill parked the car so he could look at it while painting the RV. This will be another post with lots of pictures and not too much in the way of comments. 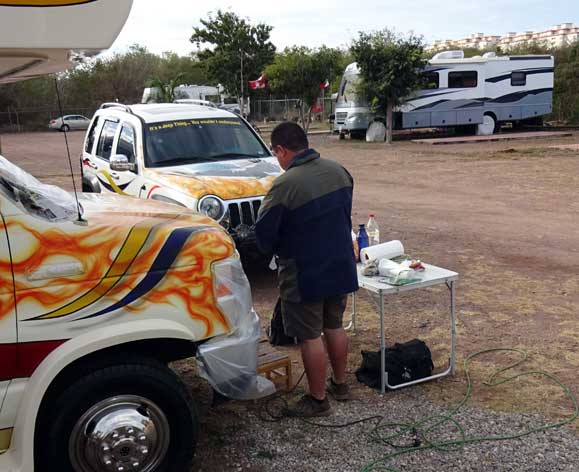 Bill is absorbing every movement Gilberto makes - how he directs the paint, how much he moves the air brush etc. I see some use of Bill's air brush when we get home. 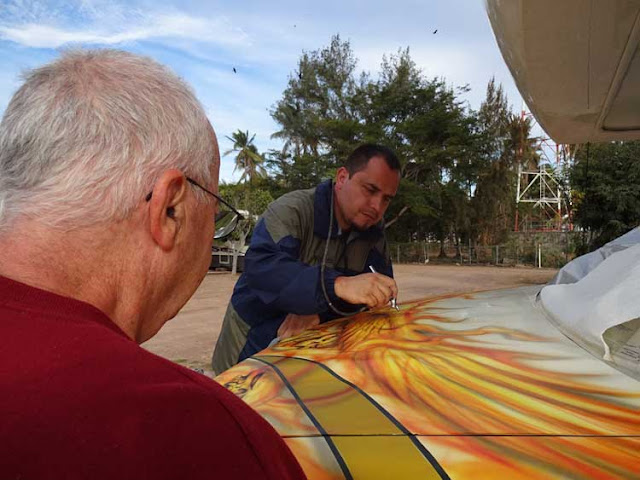 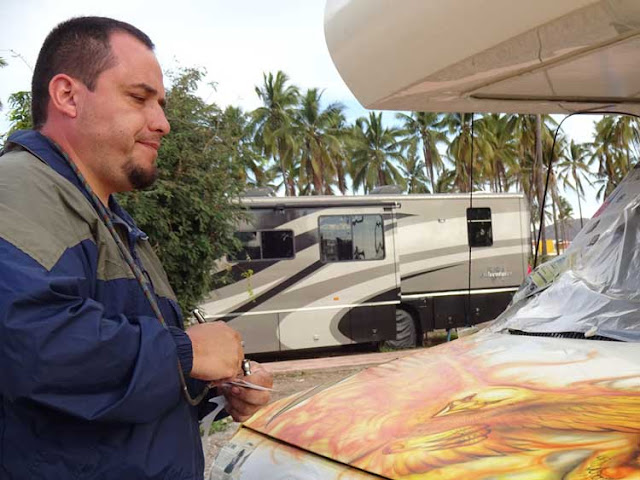 Working on the eagle's claws. 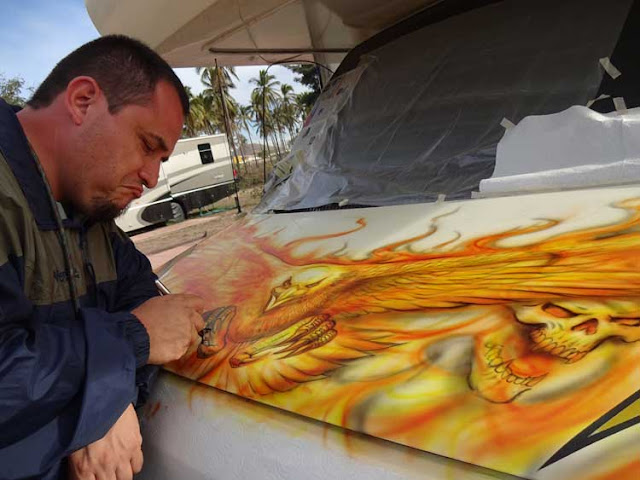 Working on the teeth of one of the skulls. 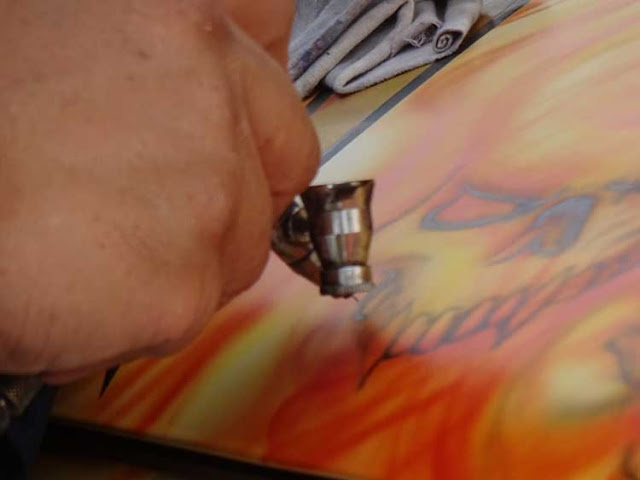 The passenger side - there will be a skull right below the covered mirror. 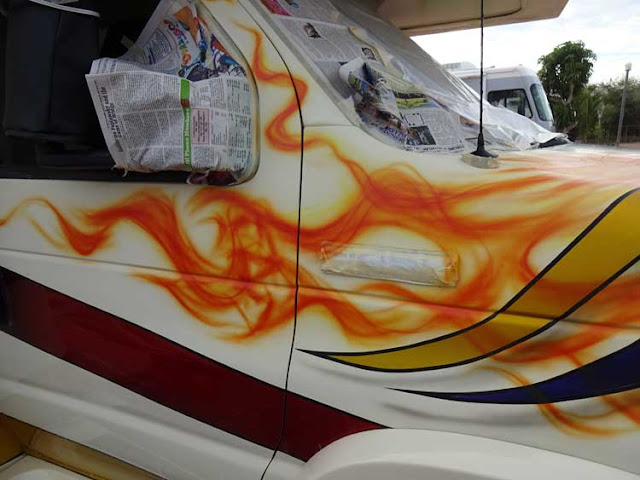 Now working on the feathers on the eagles wings. 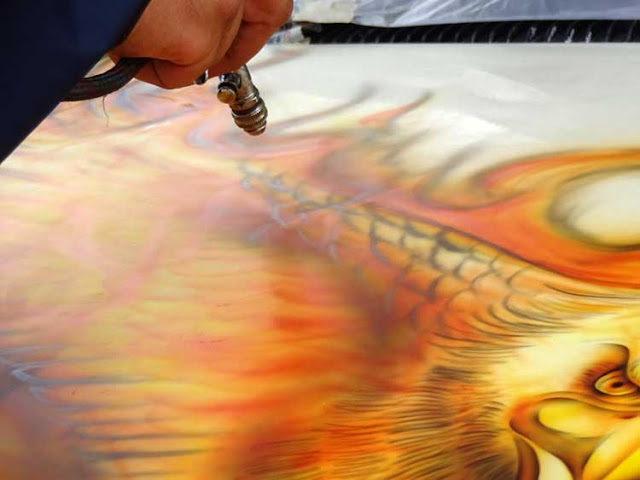 Still a work in progress. I was amazed how much work went into this before he was satisfied that the eagle was finished. [much more was added after this picture] 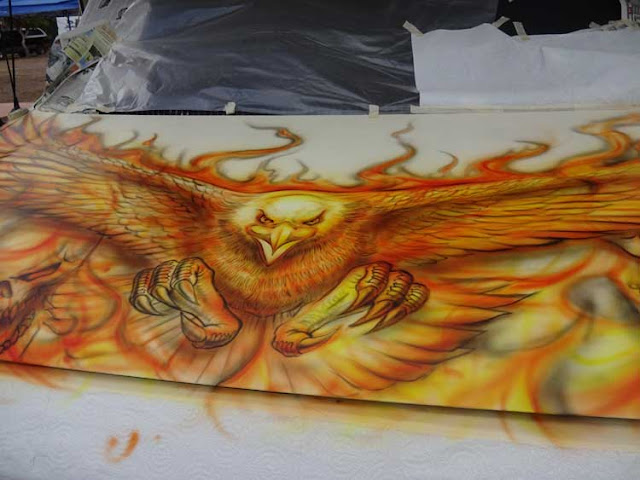 Look at all the feathers and the work on the claw. 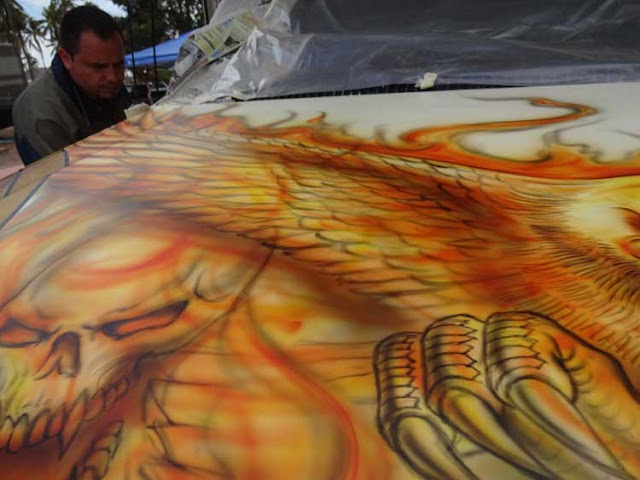 Adding more colors to the flames. 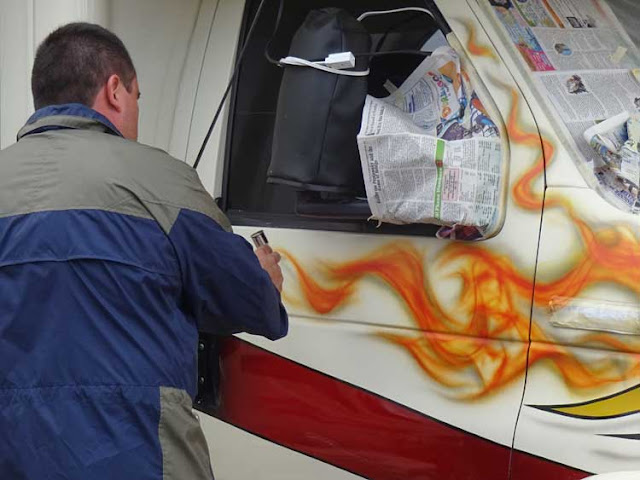 Ah, Ha a skull is emerging. 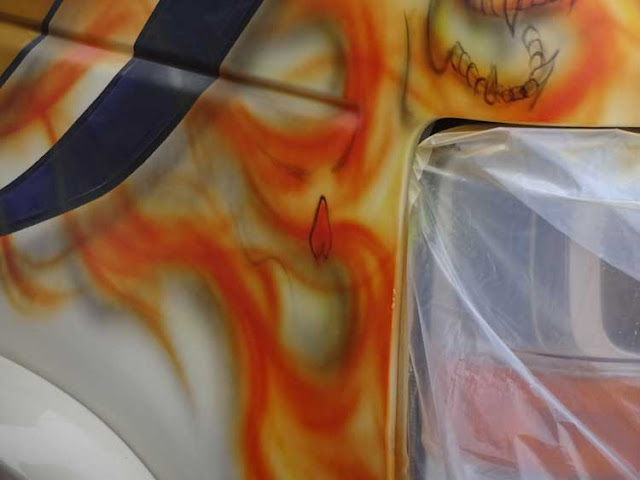 I put the series of pictures of making the skull started in above picture. together. I didn't get pictures of all the work, but this is a good idea of what he does. Last picture is the finished product except for the clear coat. Should have added spooky music to it!

Now he is adding the final colors in the flames. 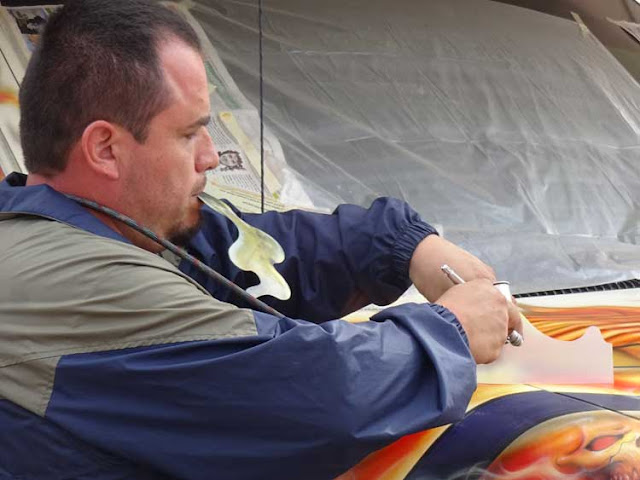 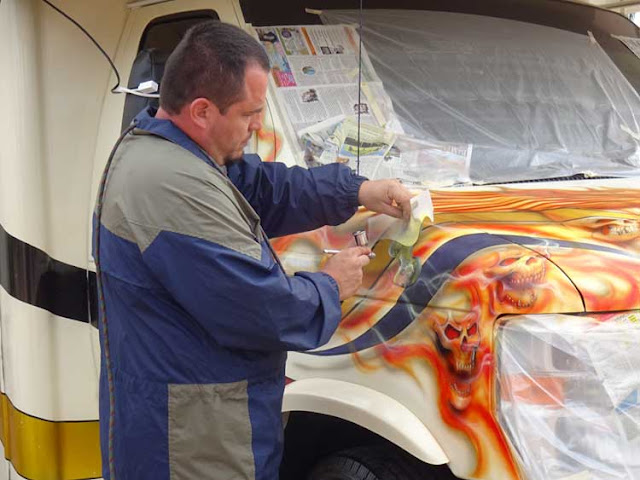 Doing the same thing to the eagle and the rest of the top of the hood. 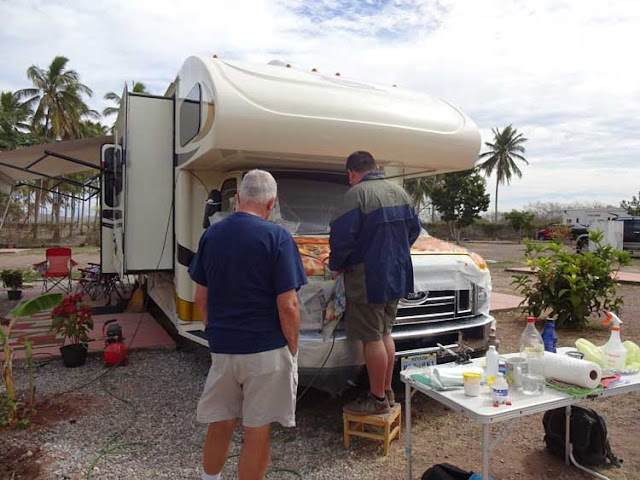 The sun decided to come out so Bill was put to work. 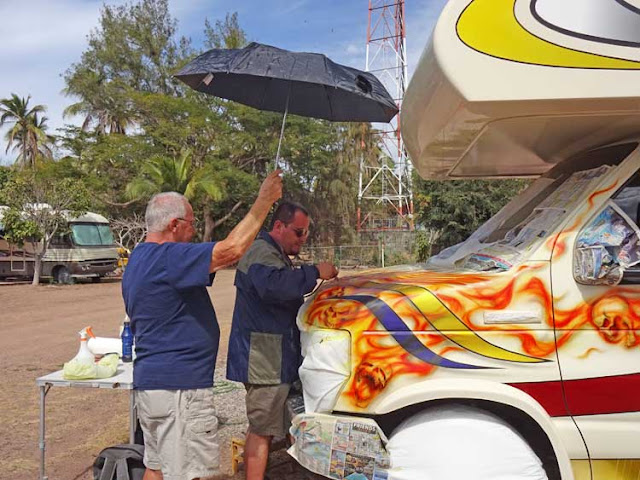 Reflection in the back of the side mirror of the Jeep.  Just thought it was interesting 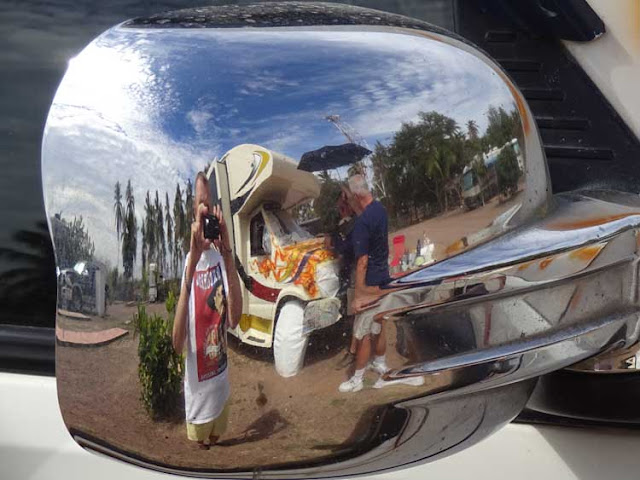 Just needs the clear coats. He looks mean doesn't he? 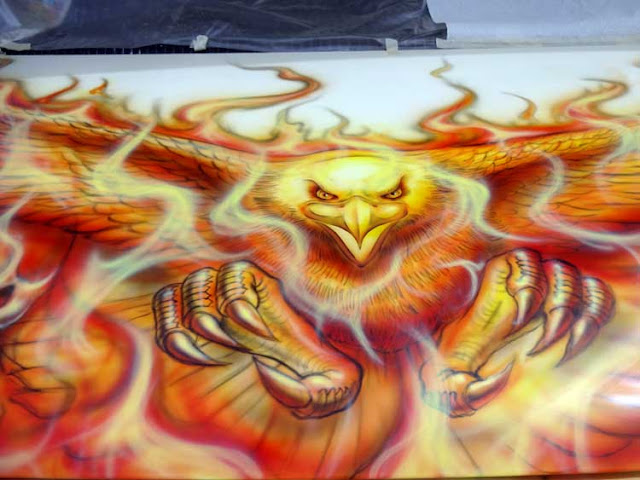 The man in the yellow shirt is Jamie, the painter, he did the graphics on the RV. He will be putting the clear coats on the cab. 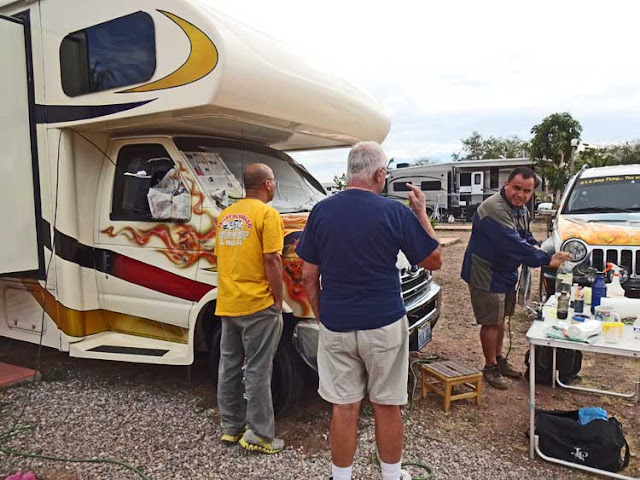 Driver's side done except for clear coats. 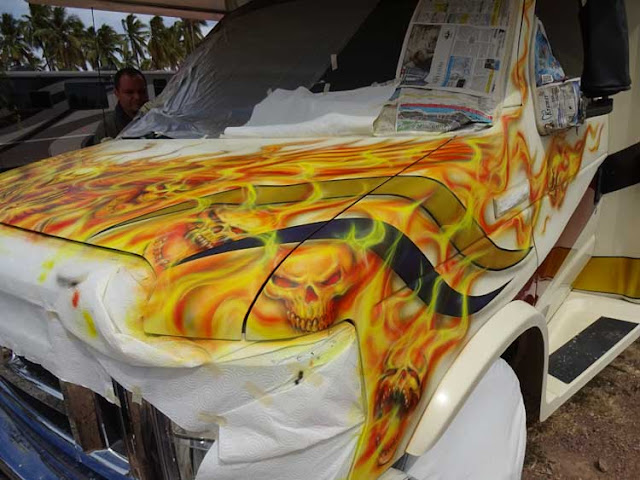 Putting his signature on the hood. 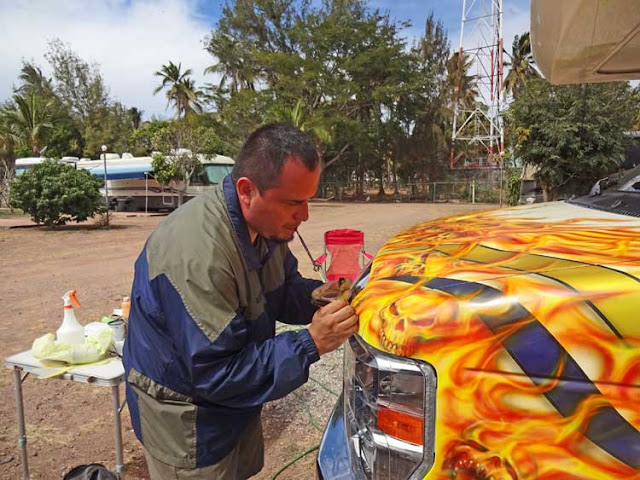 Waiting for clear coat to give it depth. 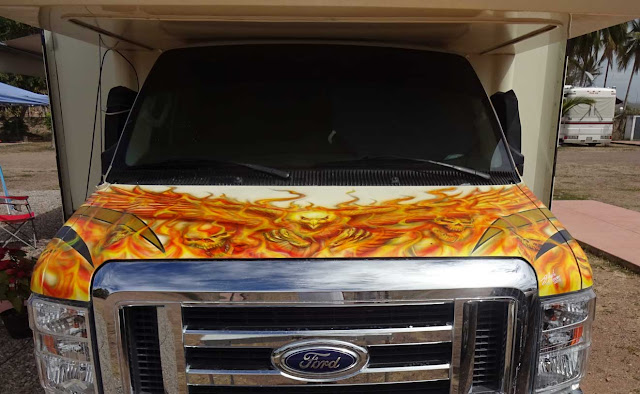 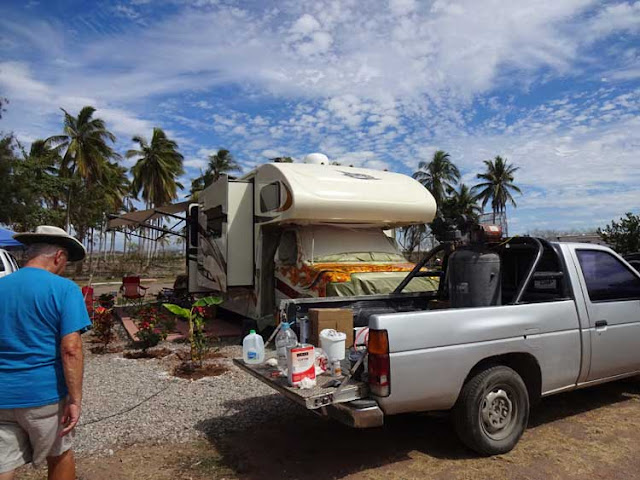 Just needing the polishing now. Will be done Saturday morning. 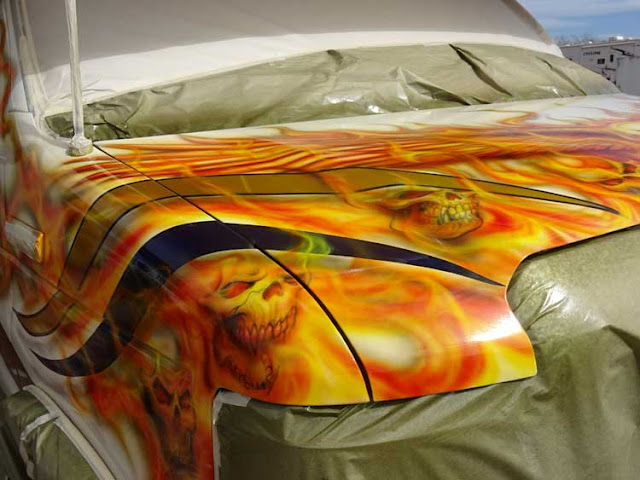 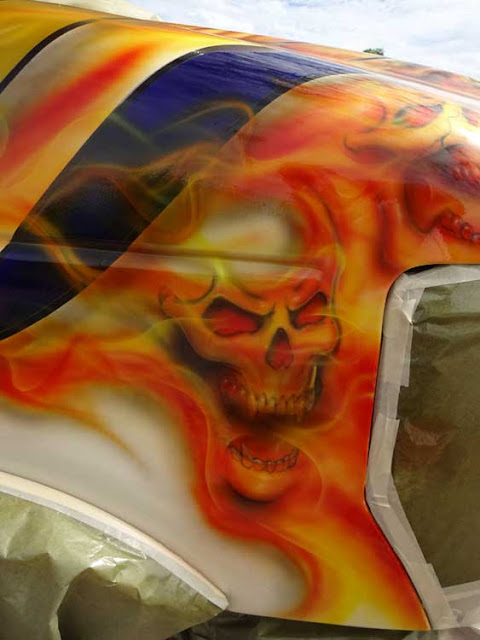 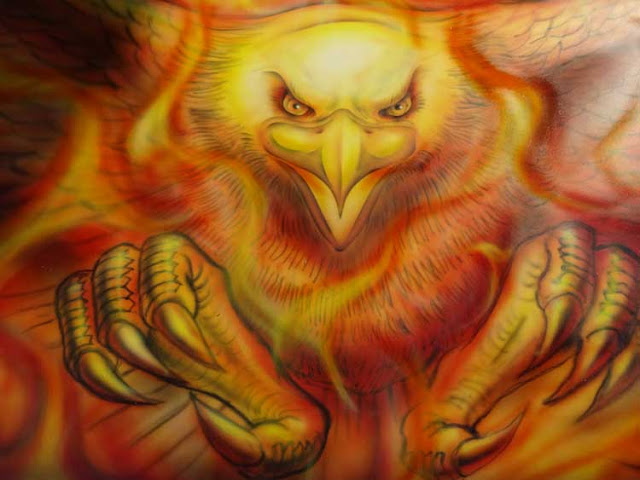 This is Las Vegas, NV today folks. Guess we aren't in a hurry to go home. 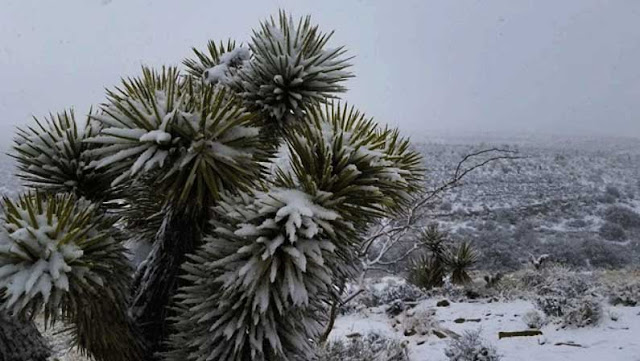 All that's left to do on the RV is unwrap it and polish it.
And we had a busy day today - all over town.

Looks great, but Bill that is not the beaver that we talked about...

Oh well next year on your rental car.

looks good, but when did bill become gothic?

I like the skulls - the eagle is his idea.

I hate this weather, so unusual but it has been great for me to stay inside and do my European research.