Finishing a fun day out Friday.

Glory be the sun is out today and it is much warmer. But of course the wind isn't blowing yet.
Yesterday was really cold, windy and humid. I even fixed dinner to warm us up. Had steak with mushrooms and onions, asparagus and scalloped potatoes [cooked in oven- works so good now.]
Our departure date is now set. We'll be leaving Mazatlan on the 9th for sure. Maybe we'll stop in several small towns that we haven't been to for a long time on the way home. But sometimes when we get on the road we just want to get home.
Discovered that our navigation system that started to work again cannot find any roads in Mexico and with our GPS not working we might not be doing too much wandering off the main road. But I did get the our Streets and Trips old GPS working with the laptop so might use that.
Back to the other day when we went downtown to see the art competition. It was held in the little park in front of the  Museo de Arte - Museum of Fine Art. 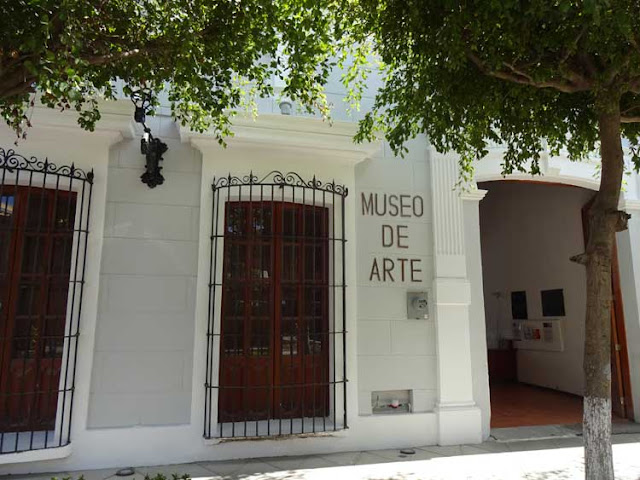 It was sponsored by this group. 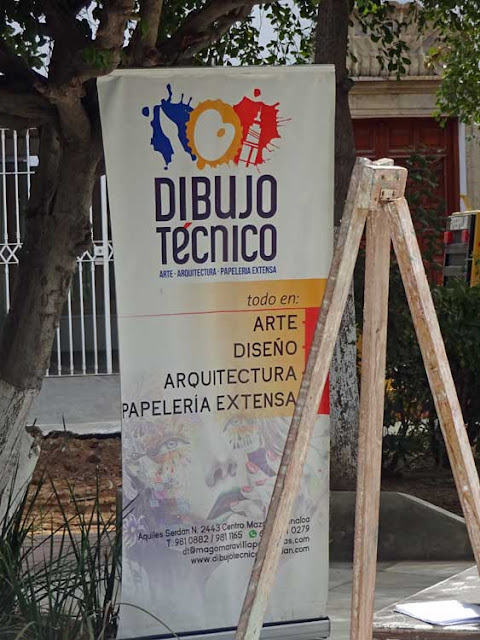 Here is Gilberto. He is the only one using an air brush and the only one not using a photo, model or picture to paint from. [In case you haven't been reading the blog, Gilberto is the painter who did our Jeep and the RV's murals.] 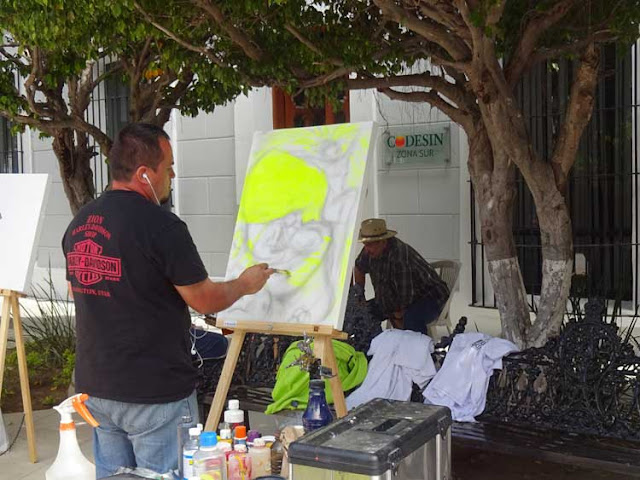 He is painting from a photograph. I think it is going to be the hill the lighthouse is on. He has a little more done. See the woman in the large face. 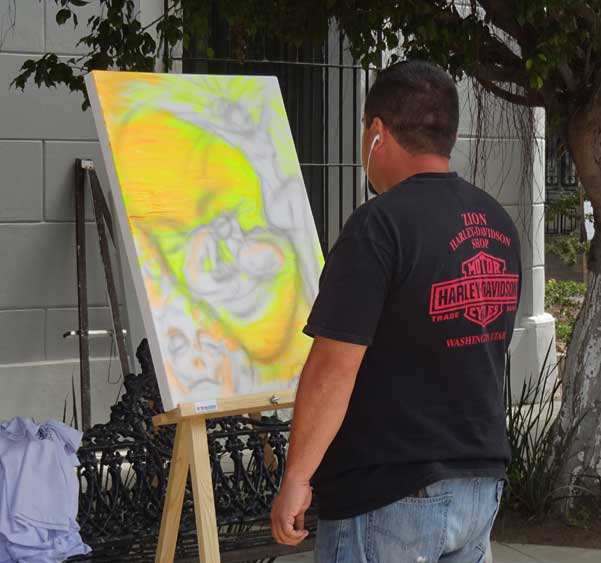 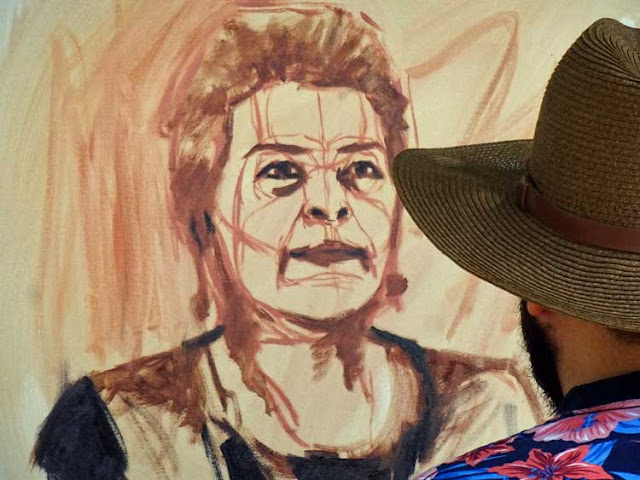 The deer is the symbol of Mazatlan. Again the light house hill. 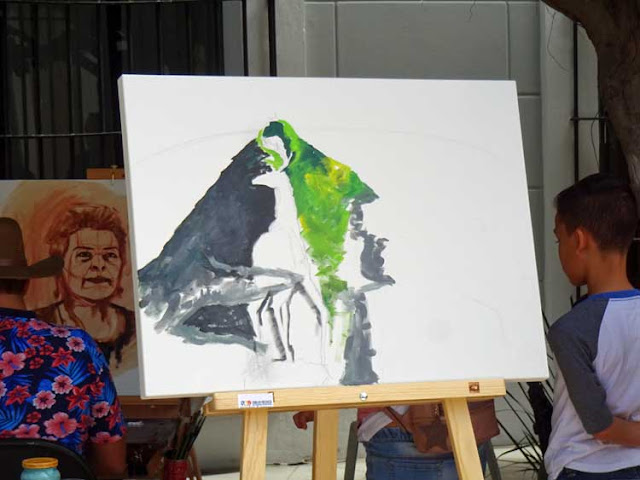 This is as much as we saw of it. By now it was getting on two or three hours since we came downtown and we needed to get back to pay the painter doing the clear coats (4) on the RV. 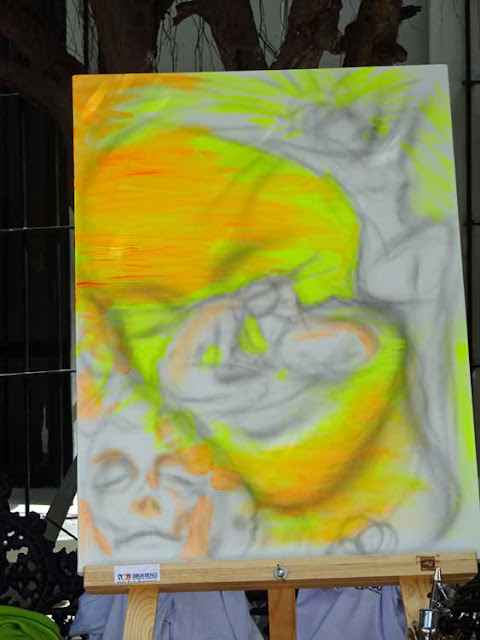 This was taken by our friend, Jackie, she saw it after we'd gone home. Still no finished product. 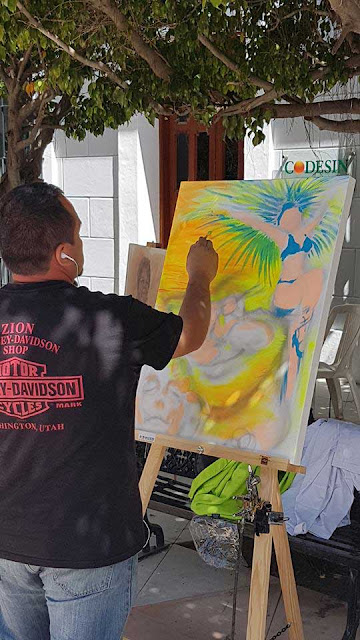 A quick video I took of most of the work being done.
This post is not in order of the times of the pictures. We were at the Art Museum then went to breakfast then back to the Museum. The next few pictures were after museum before breakfast. A very small convenience store on the street to the ocean. 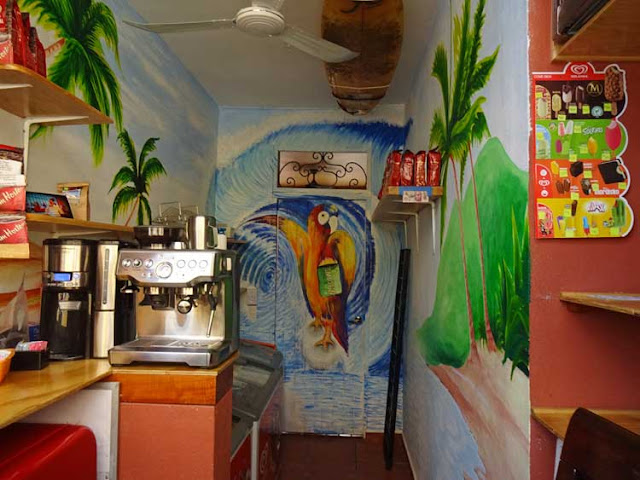 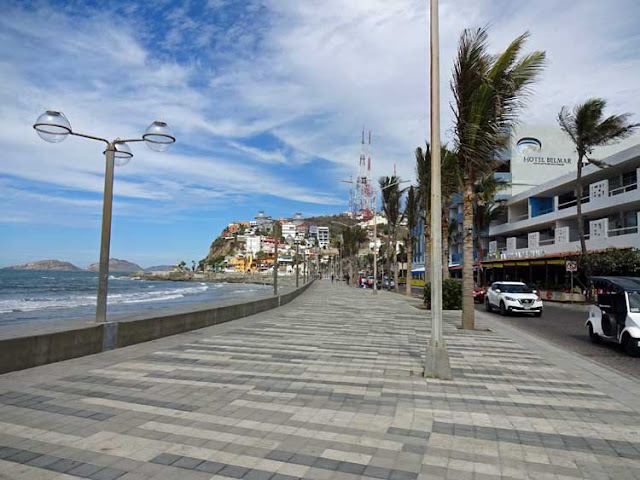 Some interesting art work in the sand. It has been here quite a while and no one bothers it. 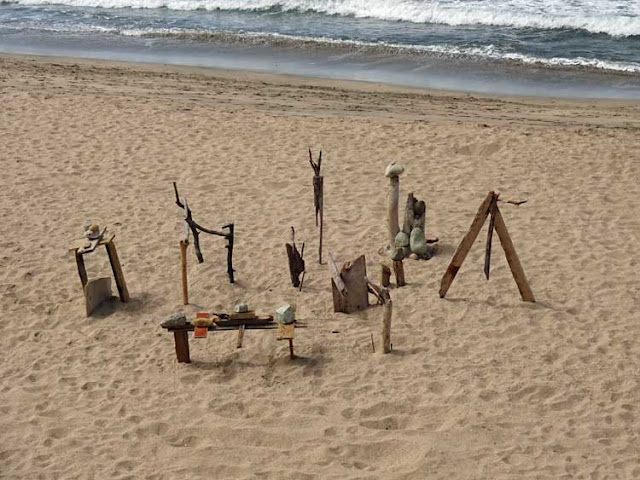 A couple of years ago this building was restored and renovated inside and out. But as far as we can tell it isn't being used. 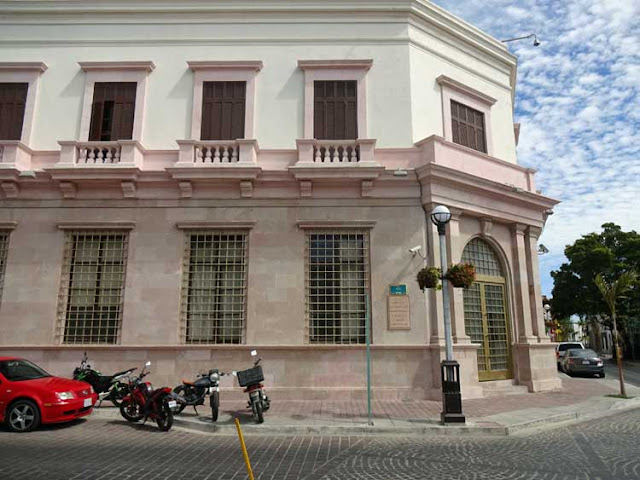 This building is right in the middle of a bunch of restored homes. It is a mechanics garage. Never know it when the garage door is down. Wonder if it will get painted? 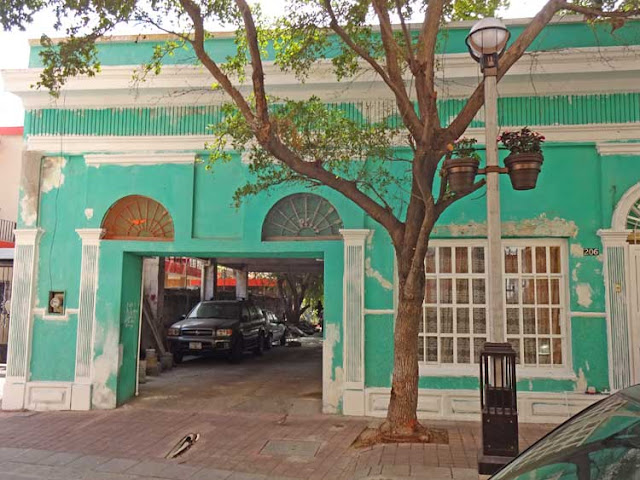 He is doing some repair work way up there. 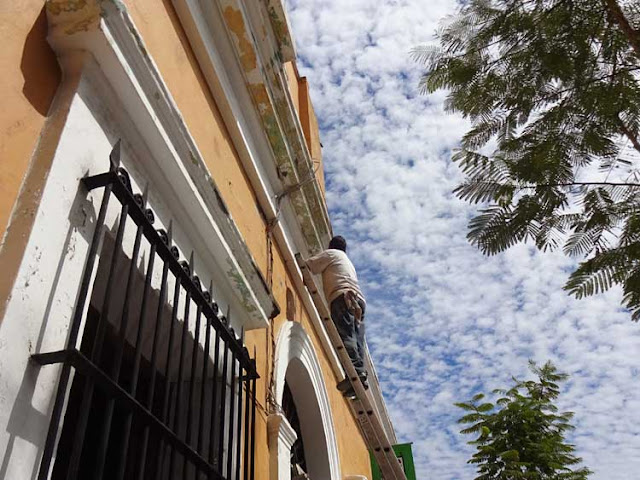 Painting the buildings in the Plazuela Machado. From salmon to dirty white/beige. Not an improvement. 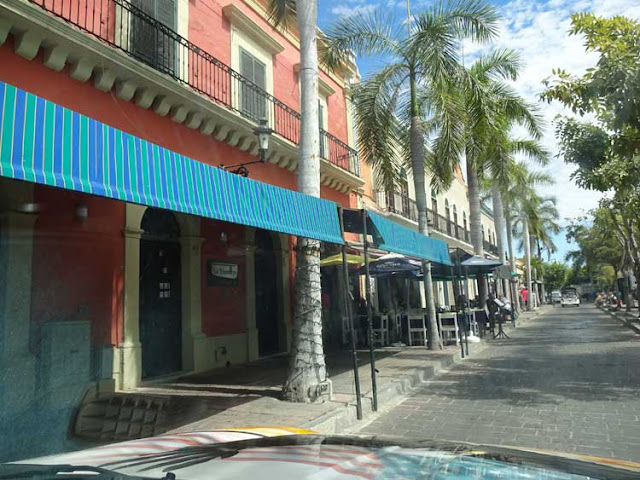 We just drove by quick so couldn't see if they patched the stucco or just painted over it. 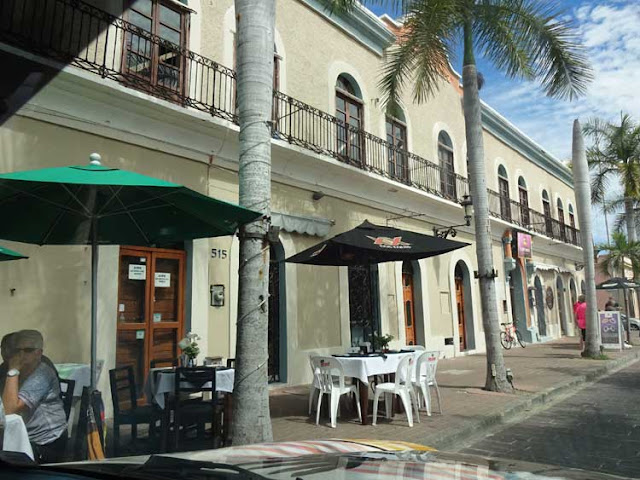 Wow! This one was pale blue the last time we drove by. It is apartments. 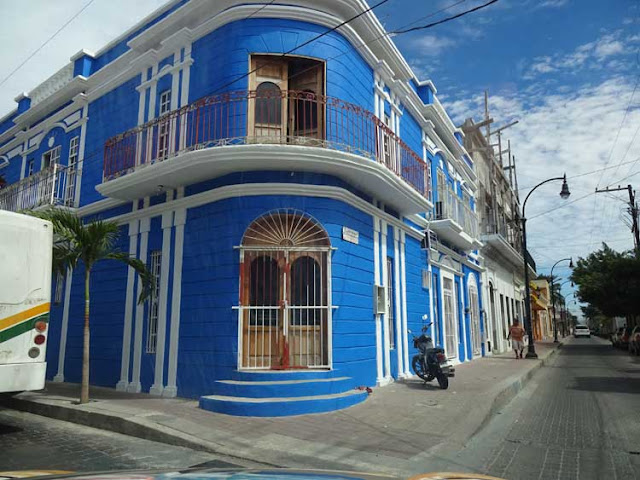 A little traffic jam and discussion among the pulmonia drivers. The guy with his back to us is a policeman heading towards them. 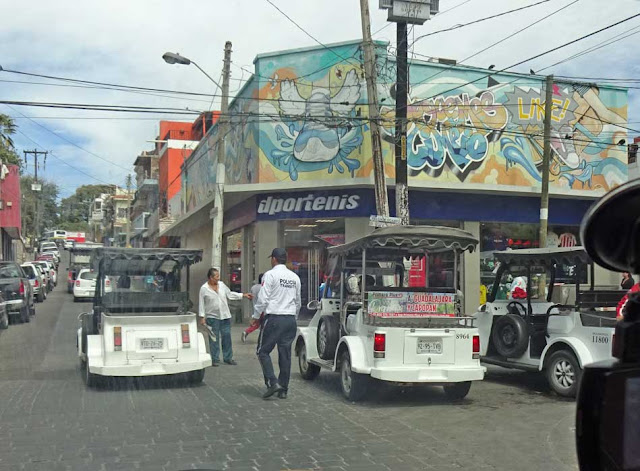 And here at the same intersection is the guy in the sequined hat. Still directing? traffic. And the road is still tore up on this side of the big central market. 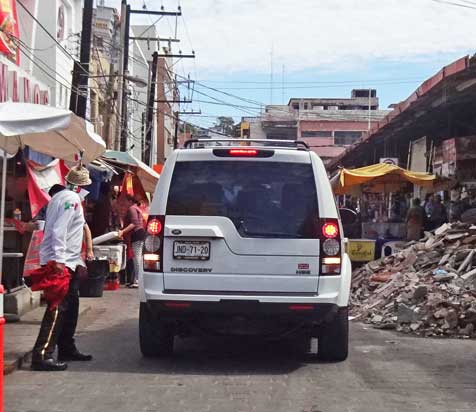 Hum?...Never know what you might see here. No idea why he was standing in the middle of the street in his what evers. 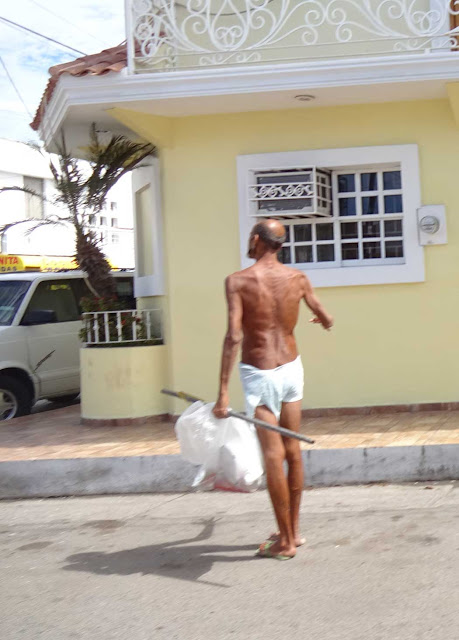 Well crap, another detour. Follow the bus, hopefully he knows where he is going. I know that sounds weird, but with all the different streets torn up and the rest all one way it is easy to get really detoured. 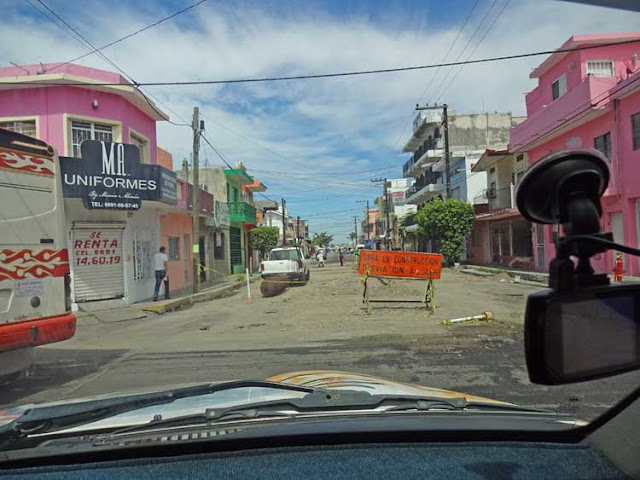 Never been on this street before so saw a lovely old home thats been taken care of. 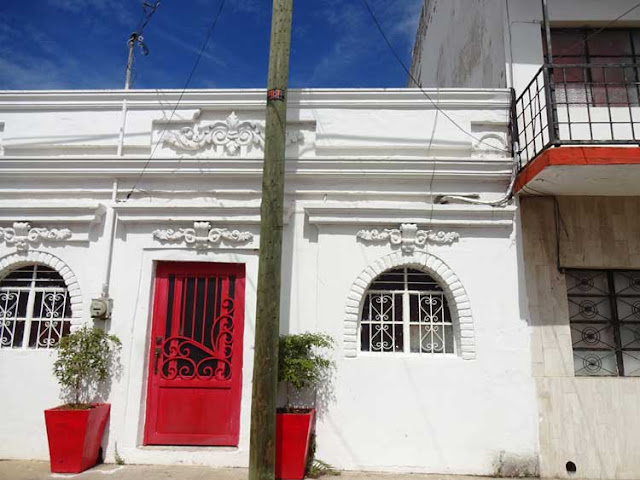 Back on the main road and more construction - you only know about it when you get to it. 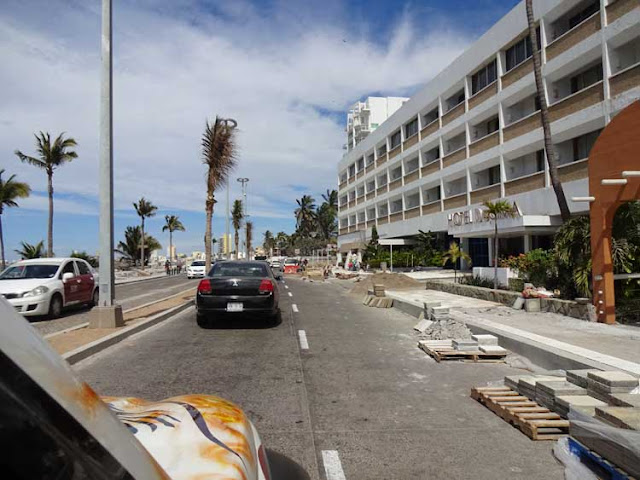 Still a lot of work to be done on the Malecon. And it is supposed to be finished by the middle of March. 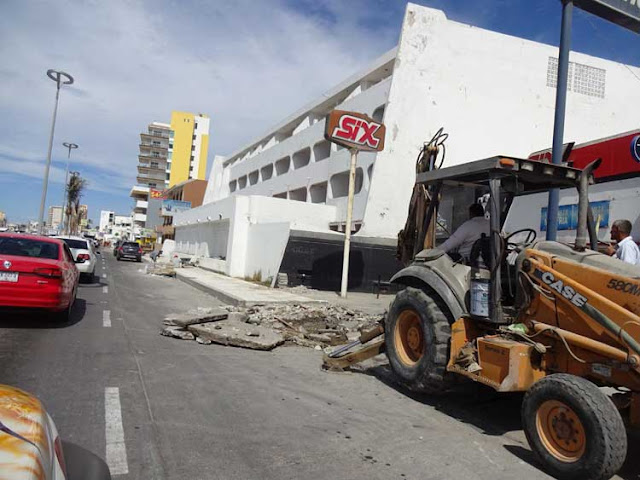 Truck loads - we saw them unloading a semi the other day - of plants to be used for landscaping. 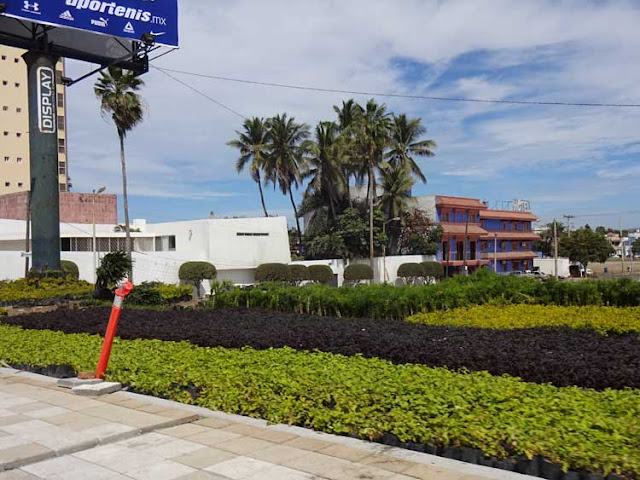 See where some of them have been planted. Lots and lots more to go. 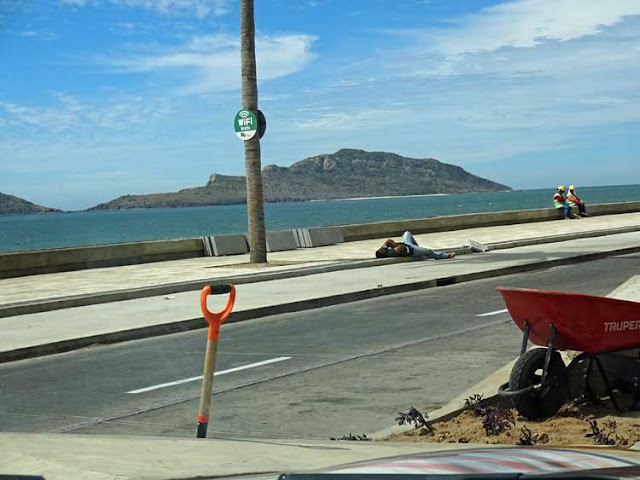 From here on Friday we went home. The RV had all its clear coats and the painter would be back Saturday to polish it.
Later in the day we made a run to the Mall. Bill wanted to replace a couple of the signs on the Jeeps back window.  Even more work being done. Here they are digging big holes in the center divider to plant palm trees. 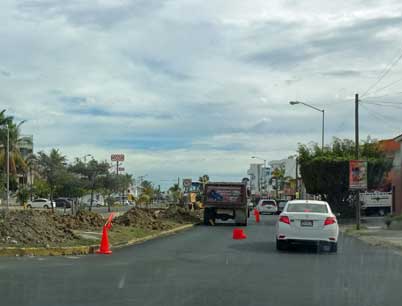 In the mall. The knows us so well she told us it was snowing in Vegas. She has relatives there. Small world. 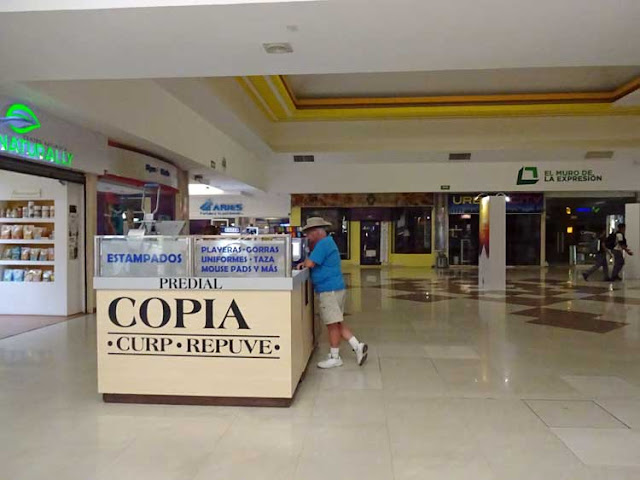 After we left the Mall we went to an Artesian Show in the supermarkets parking lot. I'm not going to go into it as again today we went there so will consolidate pictures. But let me say, we bought some of the best bread we've ever eaten there. It was gone before we got home. Saturday we stayed home, but today more than made up for it. Sun was out and we took advantage of it. Another blog.

Oh my goodness......that is the garage where we parked our car (2015) when we rented the top floor of the house to the right of it on Constitution. Great location and apartment. Looks like we will miss seeing you this year as we will not be leaving Guayabitos until after March 8. Issue with slide for which we had to order a part and it will not arrive until sometime between Feb 28 and March 8 "they" say - just hope that will take care of the problem. Traveling mercies to you and Bill.

hope you can get your part okay - small world about the garage. nice area to live in though.

Can you email me when that artisan show will be over, hope to catch it.

Love the white house with red accents. Hate the new colors on the Machado buildings and maybe the guy with no clothes is a swami.

You are leaving!!!! Colin is off on Monday March 5h to the Guitar festival in Culican and only back the 10th. Will not be able to get together for a dinner :((