And so we are starting out the first day of February with rain. On our new paint job! At least it is warmer than it has been. The sky this morning. This is looking inland. 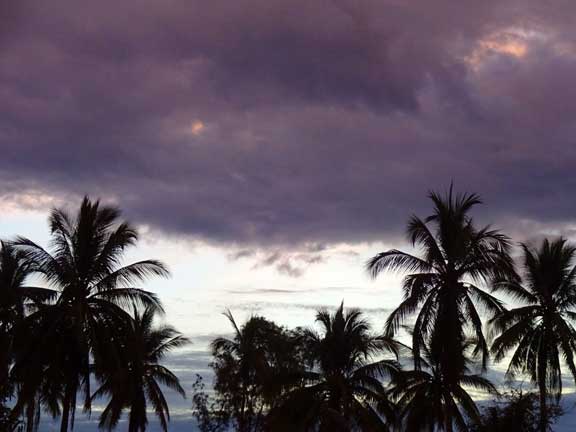 This one is looking towards the west - ocean. More color this way. 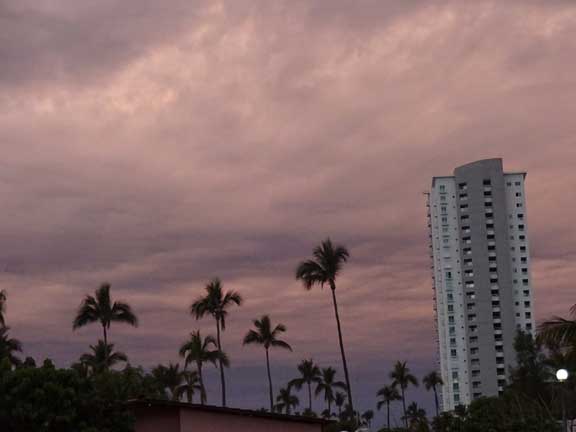 I think today I'll clean pretty good in here. Wipe down the mirrors and all the wood. It got kind of dusty in the shop.
I didn't mention it in yesterday's post but all the covers of the vents that used to be black are now the color of the body and the graphics continue on them. 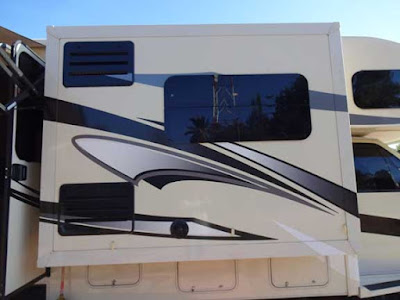 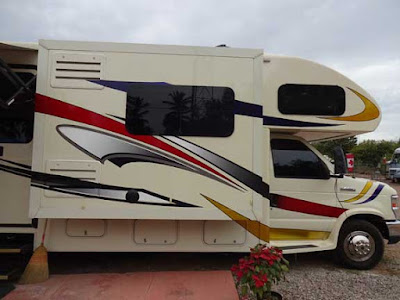 Got some cleaning done this morning before heading in to Centro. I'm looking for a Carnaval t-shirt. So far haven't found one. Beginning to look more and more like Carnaval. The gates going up on the street. 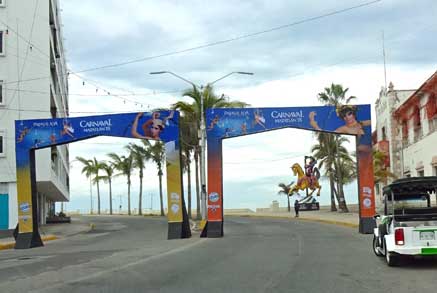 Bathrooms for the big crowd. 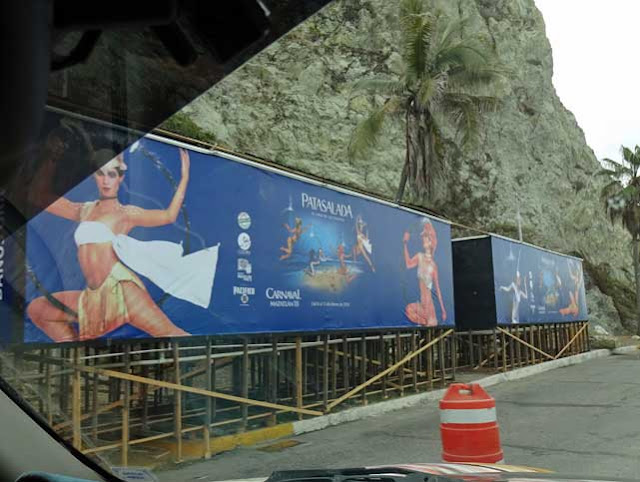 More gates on the other end of where the festivities will be. As you can see the day stayed cloudy and gray. 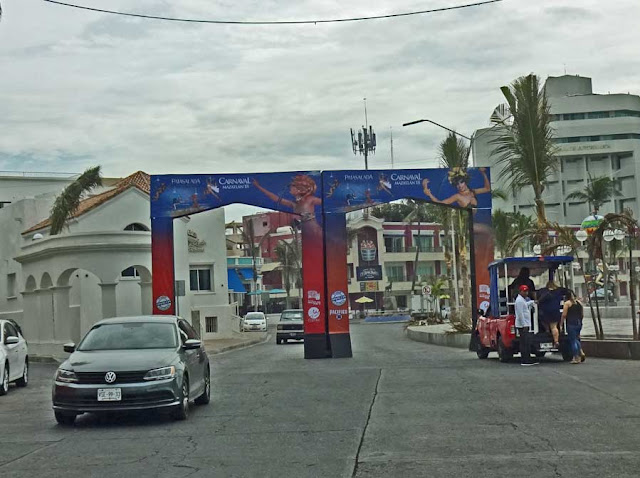 Whoops - another detour - so down a street we haven't been down before. Very pretty older well kept homes. 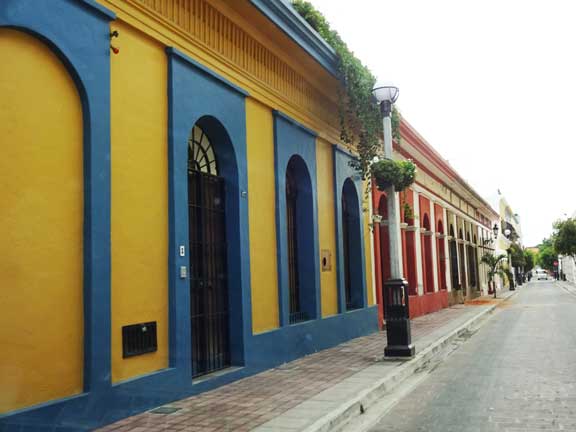 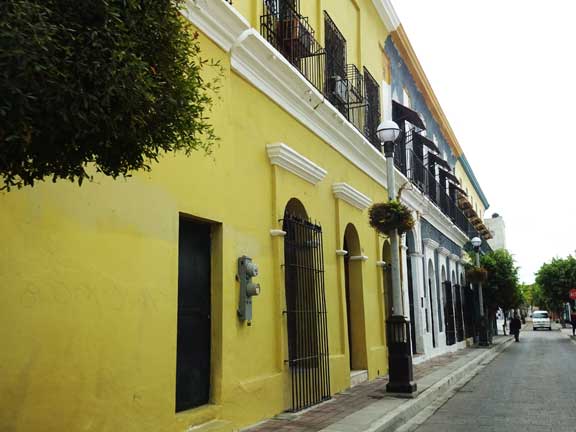 If I can remember where this is I would like to walk around it. 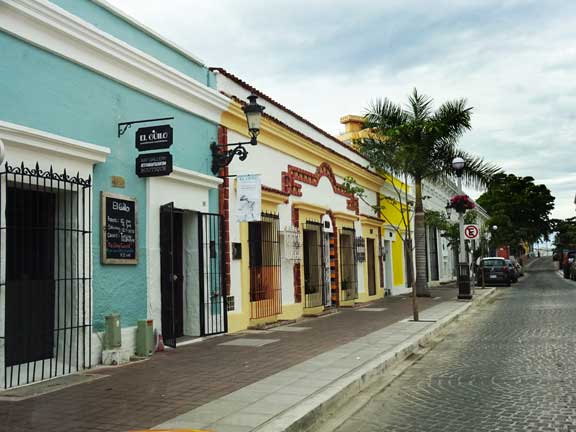 My favorite street. Angel Flores. All new plants along the roadway. 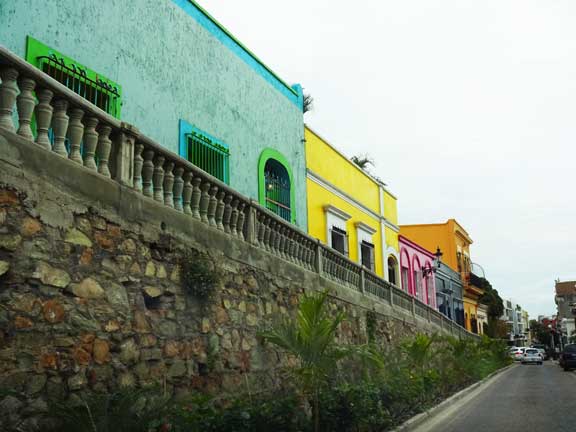 Parked and walking - I don't remember seeing this before. Interesting but weird. 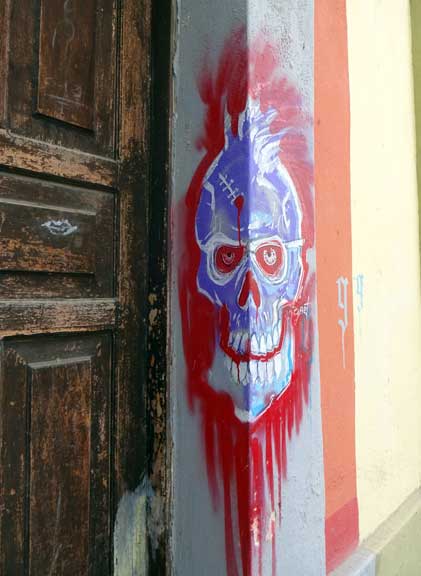 And guess where we ended up. We got the last four cinnamon rolls in the bakery. They had to frost them for us. 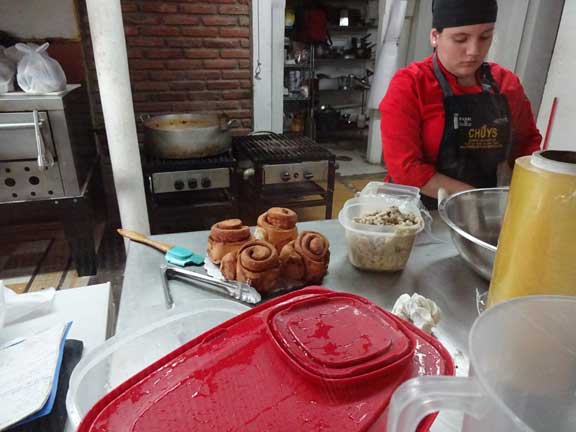 On to the Central Market. Mark was looking for t-shirts too. He found some I didn't find a Carnaval one I liked. Only one kind available. Back with gold lettering - ugly. And Carnaval is only eight days away...Decorations up in the market. 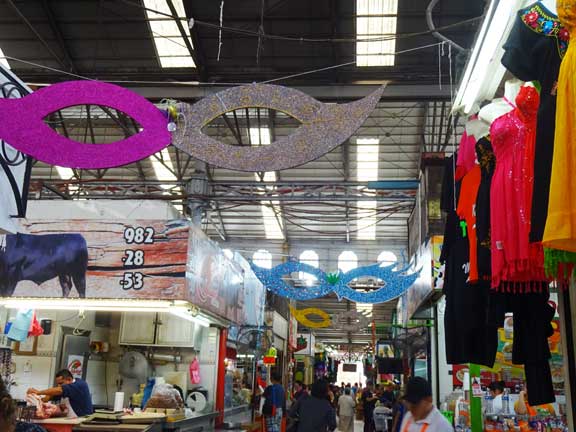 Mark was looking for t-shirts and Bill was helping him. I wandered towards the street and saw this black pickup with a butcher in the back of it. See the tub behind him... 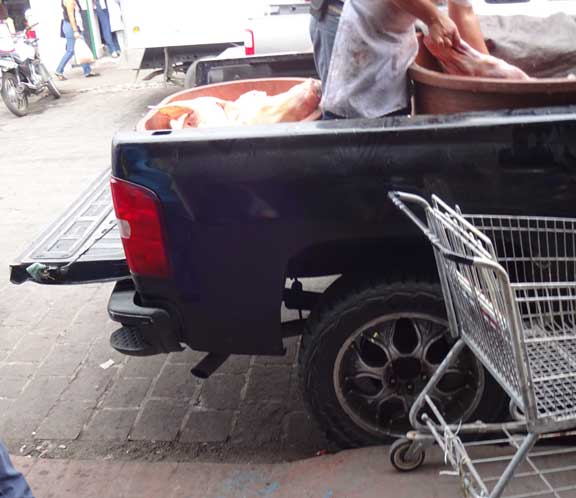 This is what is in it. 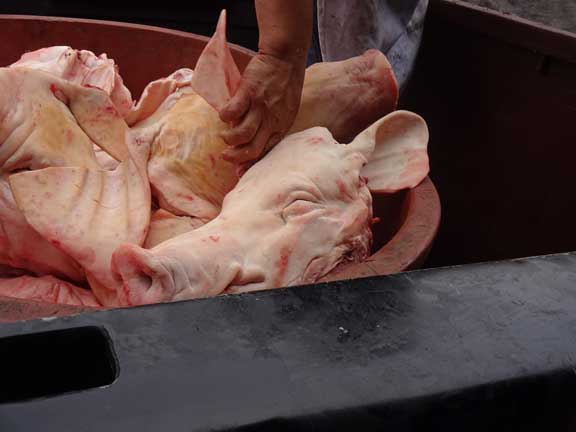 He was picking up hunks of some kind of meat, probably pig, and putting it in the shopping cart. 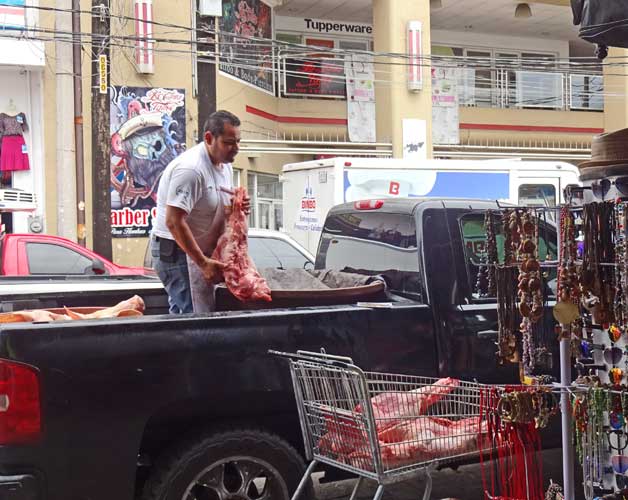 Bringing the loaded cart into the market to his shop. 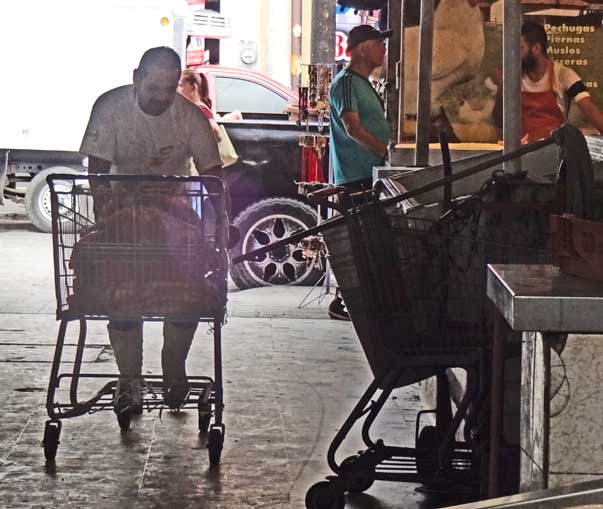 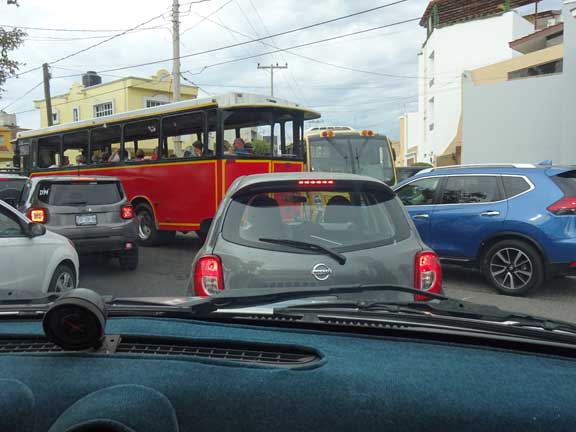 When we got home the guys were up on the cell tower doing some maintenance. It is very high. There are five of them up there. 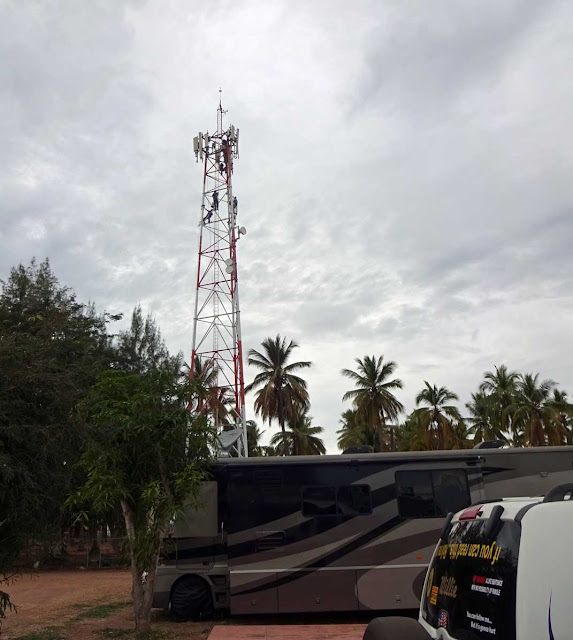 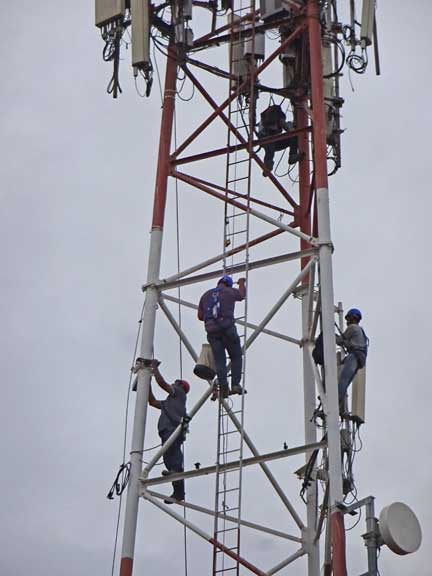 At least this time they have safety harnesses. Usually they don't. 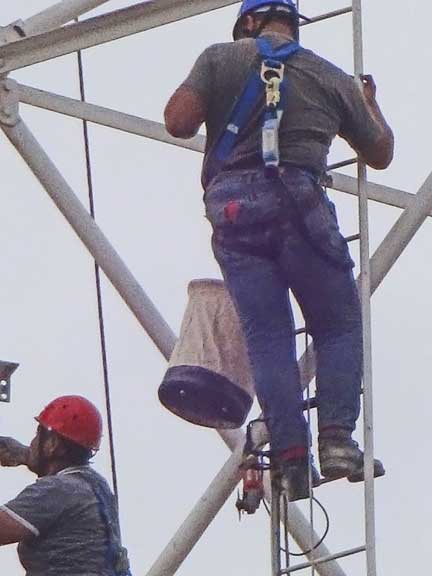 Bill got his drone out to take a closer look.
While he had the drone up a helicopter showed up. Not unusual. But what was unusual is that it kept circling the area around the tower and at a pretty low altitude. Was he looking for the drone? No idea, he eventually flew off.
A very pretty end to a busy day. 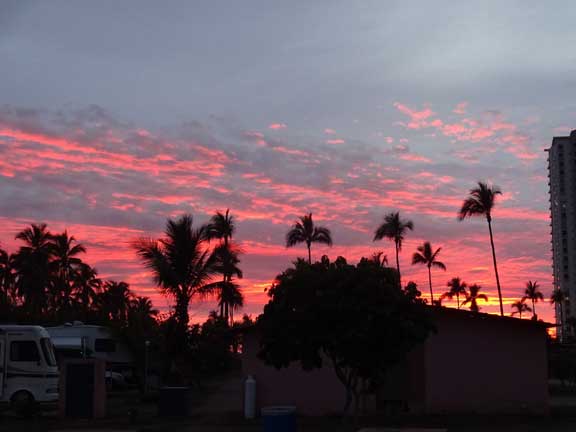 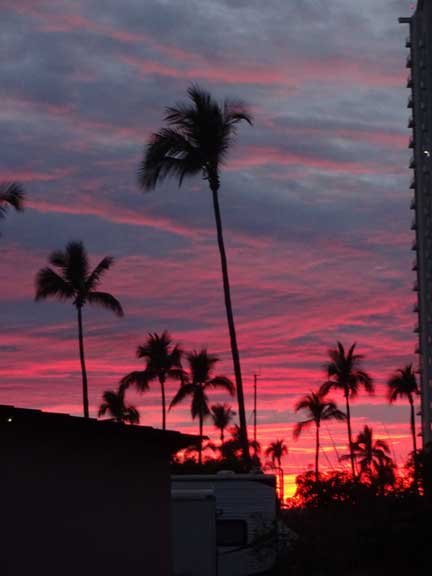 The next four days are supposed to be warmer and cloudy.

Your RV looks great. We didn't get any rain here but it sure cooled down.