Hum...not sure where to begin. I guess with Bill. After the heart stent the doctor put him on a blood thinner called Brilinta. By the middle of the third week of taking it he could barely get out of bed. His speech was slurred. I was almost in panic mode. On Friday I called the cardiologist's office. Could not get a hold of any one. Finally I managed to push the right button and get a live person. Told her what was going on. She told me she would locate someone - she was in the main office not the medical building - and have them call me right back. Within 20 minutes the nurse called back. I told her what was going on. She said she would speak with the doctor who was working and call me right back. All the time I'm thinking "Yah sure." In ten minutes she called back. She'd spoken to the, not our, doctor and told me Bill was to stop the Brilinta immediately and she'd already called a new prescription in to our pharmacy. He should start on it the next day. The Brilinta he had to take 2x a day - so he wouldn't take the evening one. Within the hour the pharmacy had called the new prescription - generic Plavix was ready to pick up. I had been on line a couple of time reading some of the reviews for Brilinta - some people called it The drug from Hell. Other said the Devil must have invented it. And to be fair others had very few side effects from it. So any way. Saturday morning Bill was already feeling much better. Able to get up without any problems and moving around and breathing better. He's been taking the Plavix since Saturday and here he is Monday morning - up on a ladder hanging my rooster. 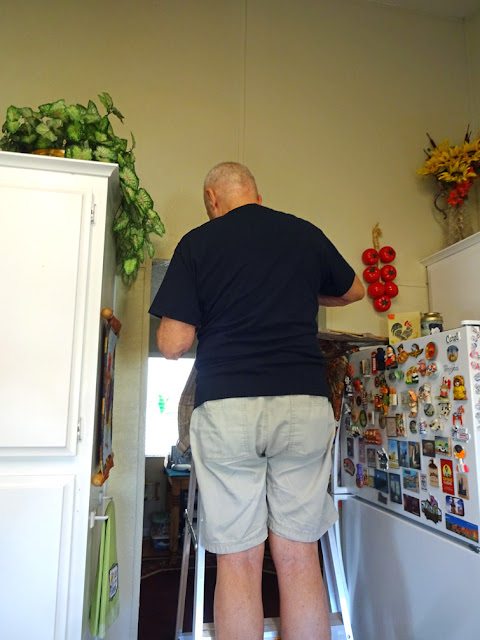 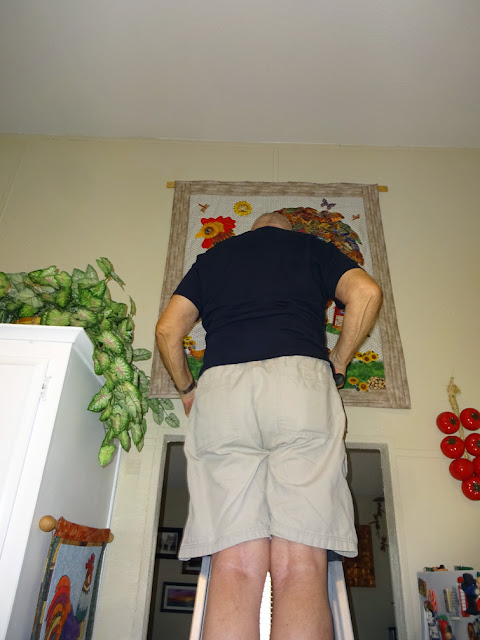 The rooster is up - I'm thinking it needs a spot light on it! [Yes I'm one of those people who collects magnets from everywhere. Soon will need a bigger refrigerator.] 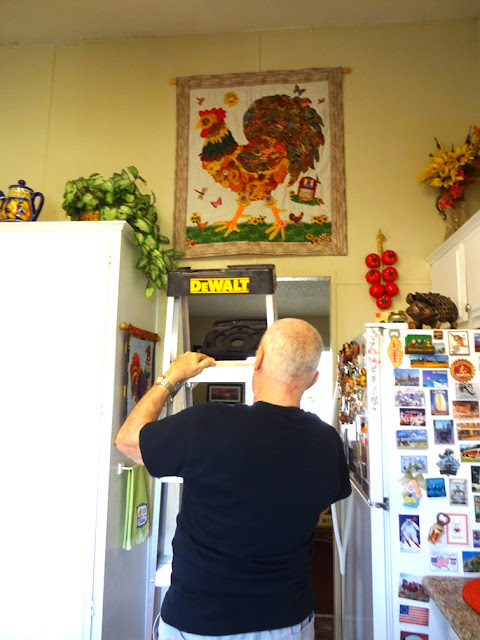 In all its glory. Now I want to do another one but don't have any more spaces on the walls. 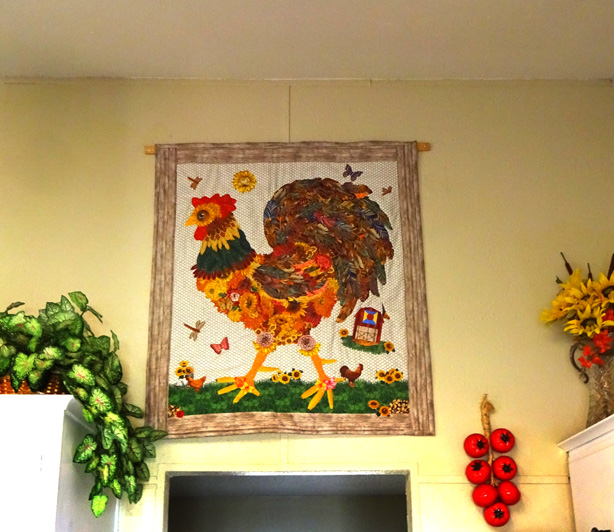 Lots of changes in the weather coming. This says sunny today but forecaster said scattered showers. Check out Sunday and Monday. Goody, goody. Bill says he needs to check out the furnace.

We did not get any rain from Rosa - just some cloudy skies. Looking towards the east over the desert. Lots of dark clouds. 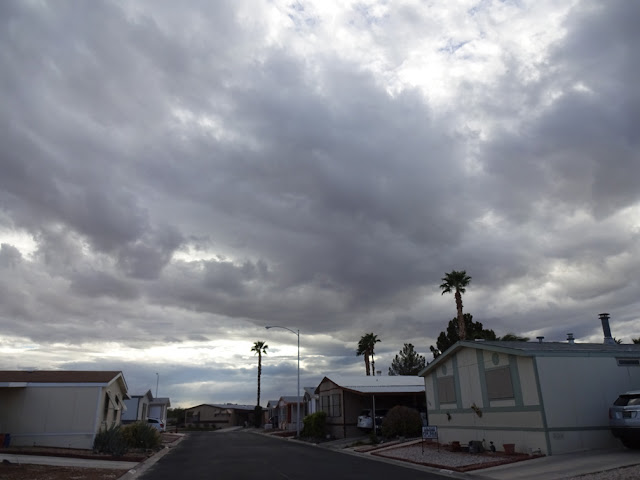 Looking west towards the strip, blue skies. This was yesterday morning when I was taking my 2 mile walk. 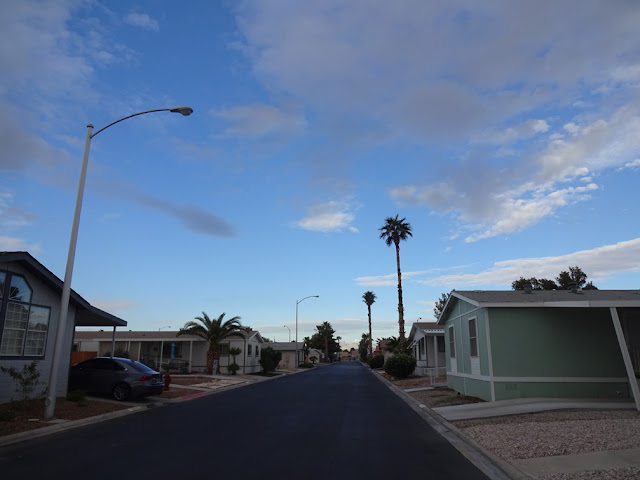 Just down the street this tree is starting to bloom. 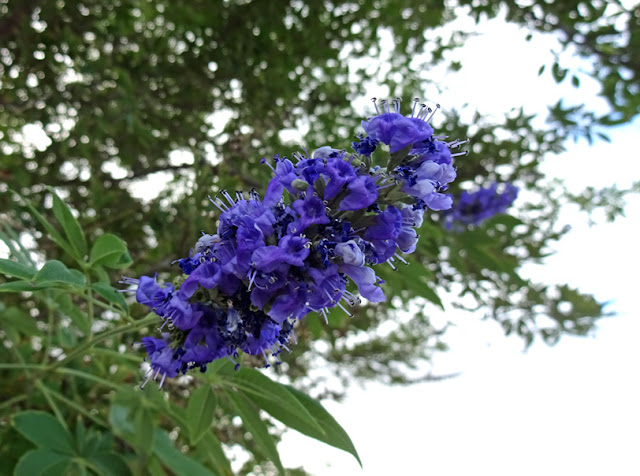 After more research I discovered our Winegard satellite dome is preset for Direct TV so to change it to Dish "someone" has to go up on the roof of the RV, take off the dome cover and reset the switches to Dish configuration. Sounds easy enough, but neither one of us wants to go up there. 80 year old bones break too easy.
Oh and another thing. On Sunday  AFTERNOON we got a call from our primary doctor's office asking if Bill could come in at 11:00 the next day - Monday. Of course said a resounding YES. I think I mentioned I was trying to reschedule our 10/25 appointments to sooner. So in he went. All is well, prescriptions all renewed for a year. As we were checking out the nurse/appointment maker said to me. Still haven't a time for you, but all your tests came back fine so you really don't need to come in. Still want me to make an appointment. NO! She would have doctor renew prescriptions and I'm all done too. So Bill is ready to get out of town NOW. But. still waiting to get Dish set up and he has one prescription that can't be renewed until the 17th.
Sometimes things seem to fall together. but then maybe I'd better just wait and see.
Posted by Carol and Bill at 8:35 AM

Wooooooo oooohoooooo. Good news on both your fronts! This makes us soooo happy. See you in a few!

the rooster looks perfect up there!

thought I'd bring you some rocks from our back yard...

thank you really fun to do.

Roosters look great ������. Glad Bill is feeling better and hope you are.

You want to get out of town and we want to get down there, lol We hope to be that far south before the end of November. Alberta has already had record snowfall so we can't leave now even if we wanted to. Good luck with your dish and your rooster looks fabulous!!

We both seem to be in good shape finally. Thank you for caring.

Isn't it snowing early up there? And we are looking forward to 75 degree days.