Not much going on around here the heat is going down a little bit. Only 99 today! But it is going down because the wind is picking up again, gusts up to 45 mph. Our AC now comes on about 8 o'clock in the a.m instead on around noon.
I'm also sleeping later and later in the morning. Why get up? I know bad attitude. Getting tired of puzzles - still working on the 1000 piece one.  And beading - though I am going to finish the necklace I'm working on.
Since the gardener cut back the Palo Verde the bushes that were under it are really blooming. Guess they like the sunlight. 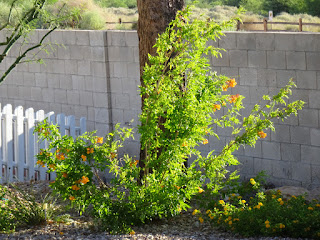 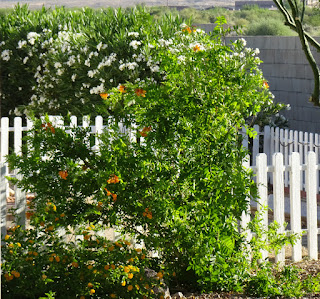 Because I don't have anything else to write about I thought I share a little from our book and our trip to Argentina. We were trying to get into Panama from Costa Rica and ran in to a little problem.